Two days ago, while drawing up a legal document with my niece Maria, we were informed of an orphanage for children suffering from AIDS. Maria also told us that, just like the metropolitan inhabitants, KL orphanages are better endowed than those on the fringe like in Rawang for instance.


During our younger days our concept of an orphan was a child whose parent or parents were dead. As children we were scared to death of losing our parents - of becoming anak yatim (orphans). We were often told not to lift and swing our legs up and down when we were lying on our stomachs because we will be invoking the demise of our parents!

Today an orphan can also be a child who has been abandoned or sent off to an orphanage because its parent/s are too poor, or because of a family breakdown like a divorce. It is crucial to state here that the divorce rate for Muslims/Malays is approximately three times that of non-Muslims!

Ramadan is just round the corner. We can expect to see a lot of programmes pleading for donations to various orphanages around the country. This is a good time to ask for donations because donors are assured of berganda pahala (lots of blessings and credit for the hereafter).

I've been in Malaysia for three Ramadans and what I watch on TV makes me depressed. These children need financial support every day of their lives - not only during Ramadan and Hari Raya. Food and shelter, clothing and schooling expenses do not reach a peak only during Ramadan.

I hope our wise Ulamas will take the time and make an effort to draw up some kind of edict to compel and/or persuade Muslims in Malaysia to dig into their pockets on a regular basis to sustain these unfortunate orphans , instead of searching for the devil's icons and Christian Crosses on T-shirts.

Sometimes this old teacher gets weary with the ways of the world and wishes for the days of yore when life and religious practices were gentler and simpler - yet just as meaningful and spiritual. There wouldn't be any electricity, no cars, no TV and no water at the turn of a tap, no ethnic tension and stress - perhaps a shorter life span. Call me escapist, idealist.... but I still reckon that life for a Malay, then, was not as toxic as it sometimes seems today.

Here are a couple of images from one of my precious books on Malaya, "Paddy Lands" (1947) by Grace Garnier and illustrated by Nora Hammerton. 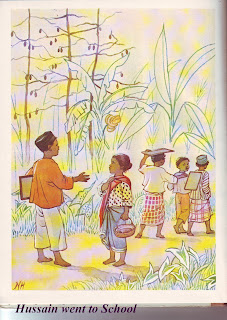 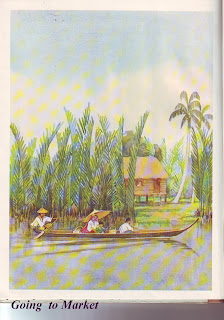 Even the days of my lovely mother would do!! This photo was taken in 1949 at our first kampung house, Pasir Panjang. 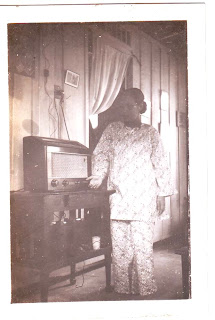 Oh what a beautiful nostalgic post. Simplicity of life that is no more but maybe we could still give it our best effort, to keep it simple.

As for helping the orphans, we have the zakat system that collects millions that in my simple mind calculation, would take care of all the required needs.

We shall but try to keep our life simple and sweet.

Yes, I would like to think that the system works that way, for the children's sake.

How I love those pictures! And quite by happenstance I was looking today in my Haji's Book of Malaysian Nursery Rhymes (did you give it to us?) and I like best the cover picture of the Pak Haji reading his book of 'Pantun Budak' to his merry band in what looks to me like the great outdoors, with the Kuala Kangsar mosque in the background.

And here's a sampler:

And that's the Haji's translation of "Mary, Mary, Quite Contrary".

It's love of stuff that makes our life not so simple. And yes, Aishah's right. What's happened to all that zakat money? In all these years and with all that money, we should have at least one free hospital now, to cater for all.

This is my gingko biloba moment. I forgot to mention in my earlier comment that the illustrator for the Haji's Book is the same Nora Hamerton. Can anyone tell us anything about this wonderful person? (She wasn't er, your schoolmate by any chance?).

PS The Haji's book in my possession was once owned by one Teng Fong Kan who wrote his name on the title page. Bless him.

For the children of today, today will be the those-were-the-days that we today wish were like the them-days that we wish could ... Blast, I give up (and I am sure, so will you).

Anyway, Schulz of Snoopy fame said it best: Yesterday I was a dog. Today I'm a dog. Tomorrow I'll probably still be a dog. Sigh There's so little hope for advancement.

Couldn't you remember the salt&pepper-haired fairy that gave you BOTH that little book?

Nora Hammerton must have been about 20? 30? when she illustrated that book in 1947. My schoolmate? You watch your step mate, when you travel north of Watford Gap - I'll be sending the hounds of Leicester after you.

You're a man of good cheer! Thank you.
Yes, like our parents who look back on their peaceful past I find myself singing the same song.

Here's something from my favourite Calvin and Hobbes.

Calvin: Hey Mom. What's this I hear about the greenhouse effect?
They say the pollutants we dump in the air are trapping in the sun's heat and it's going to melt the polar ice caps!
Sure, you'll be gone when in happens, but I won't! Nice planet you're leaving me!

Mom: This from the kid who wants to be chauffeured any place more than a block away.

" Food and shelter, clothing and schooling expenses do not reach a peak only during Ramadan "

which make me clueless. are these orang kaya jadi gila-gila kaya when Ramdan come? so that they can donate their money to these poor people.

So glad to find a kindred and thinking spirit.
There are a lot of thinking to do and questions to ask about how Muslims treat each other despite and in spite of their piety.

while these " need to be ask " question are being asked,

those needy are starving.

mybe all we need is action.

I agree thoroughly as to the need for action.
However I also think we have been asking too many wrong questions about how we behave as Muslims.

We ask too much about how to be good Muslims for the hereafter but we do not bother enough about doing good for our fellow Muslims on this earth - other than what is requested by Islam.

I cannot remember who said this, but I heard it from a Parsee ayurvedic doctor while we were in Bombay years ago. "Islam is a great religion, it's a shame about the Muslims."

It still holds true today - especially in Malaysia. Piety without pity is a waste of religion.