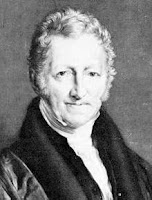 In 1798, the priest and economist Thomas Malthus (1766-1834) concluded from a study of plants and animals that man's excessive rate of reproduction would lead to overpopulation and eventually cause a shortage of food supply resulting in famine and poverty.

He suggested a reduction in family size, especially for the poorer class.  ( Does this remind you of Singapore's worry in the 1970s and 1980s onwards over the poor fecundity of the Republic's graduates?)

The study of overpopulation has resulted in copious and diverse academic research.  The subject has also been taken up by environmentalists and racist/religious fanatics to warn the world about the bogey of a rising birth rate and overpopulation in the Third World -  amongst the poorest classes of the globe.

There's a growing concern in the West about its low reproductive rate and its increasing elderly population.  It has been predicted that by 2050, 40% of Europeans will be over 60.  The typical population pyramid where the young form a large base and the elderly make up the the tiny peak will be turned on its head!

More worrying is the idea that all forms of social problems can be solved by cutting population growth.  Even more disturbing is the belief of celebrities like David Attenborough, and environmentalists like Jonathan Porrit, that population growth has to be curbed  to preserve the ecological balance of the globe.  In 2009 the UK based Sustainable Development Commission regarded that human reproduction contributed to global warming.  The Optimum Population Trust ( a Malthusian Population Campaign  Group) calculated that each baby born in Britain will cost 2 acres of woodland in terms of the CO2 they will burn!!  And Malthus only had to worry about food supply!

Let's look at one real reason for the fear of these western pundits.   In 1900 the West ( including Russia and Eastern Europe) made up 35% of the world's population.  By 2012 this had dropped to 17%, and by 2050 it is expected to be 10%.  On the other hand, by 2050, Africa's population will be more than four times Europe's population.   How terrible!   Imagine the economic and ecological strain on the planet.  Think of the 'carbon footprint' stamped on the planet by these rising millions of Africans!

But, there is another issue - more important than overpopulation - that the developed countries are not willing to own up to because this places the responsibility for global warming at their doorstep.  It is the unsustainable consumption of the world's resources by the wealthy West and other non-Western countries like Japan

1. Out of 6.5 billion people in the world today, the 1 billion  in the developed countries  (North America, Western Europe, Japan, Australia, New Zealand) have a relative per capita consumption of 32.  This means that 'the average rate at which people consume resources like oil and metals, and produce wastes like plastics and greenhouse gases" is 32 times higher than  the developing world.   Numbers in the Third World may be increasing at a higher rate, but it must be remembered that the average American/Briton consumes as much as say, 32 Kenyans.  (From Jared Diamond, Professor of Geography at UCLA)

2.  In terms of carbon emission, the world's richest half-billion (about 7% of global population )  cause 50% of the world's CO2 emissions.  However, just 7% of CO2 emission is created by the world's poorest 50%
(From Princeton Environment Institute)

OR, to put it another way.  India, China, Pakistan, Nigeria and Ethiopia will be responsible for most of the world's population growth.  But, the CO2 emission of one American is equivalent to 4 Chinese, 20 Indians, 30 Pakistanis, 40 Nigerians and 250 Ethiopians.

So we need a rethink.  Should we really be paranoid that the developing world are breeding like rabbits?  Or that the well-off parts of the world are gorging like pigs?

But there is an even more dire scenario.    In my next posting I'll tackle another 'population' fear - that the Muslims are "copulating like barbarians at the gate". 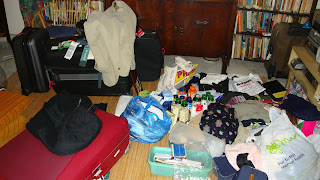 Trains and Boats and Planes

We have taken many great train journeys, from big ones like the journey across the Deccan Plateau from Bombay to Madras to little ones like the North Yorkshire steam train.    And  I remember with special affection the little rail journey in 1983 from Beaufort to Tenom in Sabah.

We have enjoyed spectacular sea crossings too -  from Wellington to Picton in New Zealand and on my own I made the romantic journey from Marseilles to Corsica in 1972 where I got as sick as a dog and threw out my dinner into the Mediterranean Sea.

As for planes, that started in 1972 as a huge thrill and now it has become one big yawn, herded like cattle from one airpen to another.

Now, when you get to the autumn of your years, one's mobility is circumscribed not by distance but by the state of the knees, the back, the hips and umpteen other parts of the body.  It is no more a question of traversing wild open spaces by trains or boats or planes.  It has been reduced to modest little steps  (with the aid of various thingamajigs like a Zimmer frame, walking sticks and a wheelchair)  like hobbling from the bedroom to the bathroom, from upstairs to downstairs and vice versa.  Little sorties to the kitchen for a cup of tea are such a treat.

And when you refuse to succumb to the impediments of a decrepit body and you make a dash-it-all  traipse to the Park or the shops, then you deserve a pat on the back  (Ouch!) even though you pay for it later with a pain that yells at you for being foolhardy.

But then you observe a friend like Loz, a few years younger than us, stuck in a wheelchair for the last 30 years.  He never fails, whatever the season, to 'take a walk' to Victoria Park with his dog every morning.  His gloves are worn from grasping and pushing the wheels of his wheelchair as he 'strides' to the Park.  His dog doesn't need a leash.  He knows how to walk at the same pace as his master on the pavement and when he gets to the Park, he goes hell-bent-for-leather for a good run, while Loz 'ambles' along the path in the Park.  Looking at that dignified joy for life, why should we complain?

On June 12th, we take another plane trip to Kuala Lumpur.    This time the spouse has a wheelchair - and this time he travels upmarket so that he can keep comfortably horizontal for most of the 16-hour journey.  I shall keep a close eye on him from the other side of the partition to make sure he doesn't run around chasing the stewardesses!!

Just two days ago, Maria and son Ariff, Hidayah and hubby Faiz played musical chairs in the KL house.  They have been shunting boxes of books, a huge bookcase, and a heavy metal 'treasure chest' to make room for a single bed in the Library - to make a day care room for Uncle Iain. 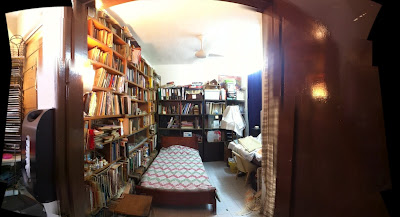 From here Unc can stagger along to make little forays into his garden,  totter to the kitchen where he will brew loads of  teh tarik for the young ones.  Most of all, the cats .........
﻿﻿

.............especially Comot and her little fellow-travellers (aka fleas) to give him mental stimulation and buckets of love.

I cannot end this post without thanking with all our hearts Maria (orange top in the back row), Hidayah and Faiz  ( the laden couple standing to the right) and little (?) Ariff  ( in the greenish-blue t-shirt  in the front row)  for all  the caring help and support.  Bless your cotton socks!! 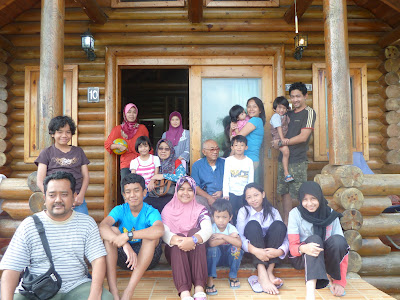 We will miss summer and our home in Leicester but it will be wonderful to get home too - on a plane and on the wings of a prayer.