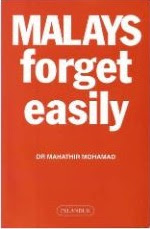 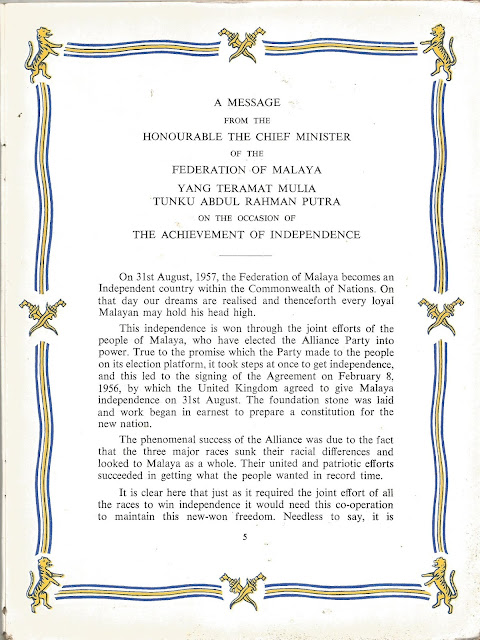 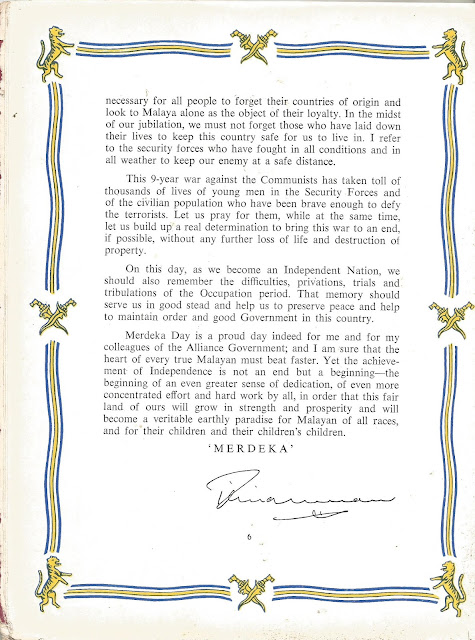 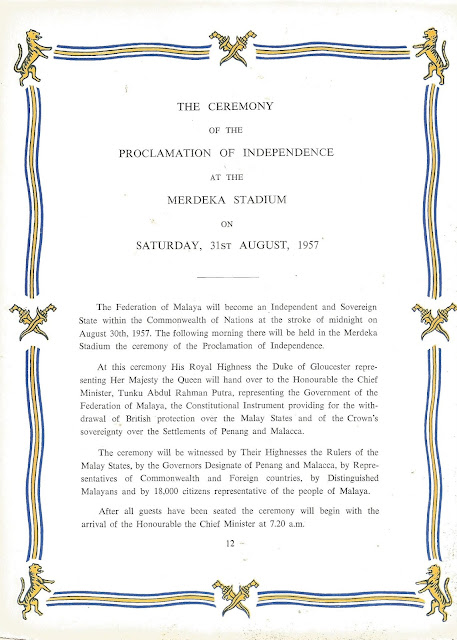 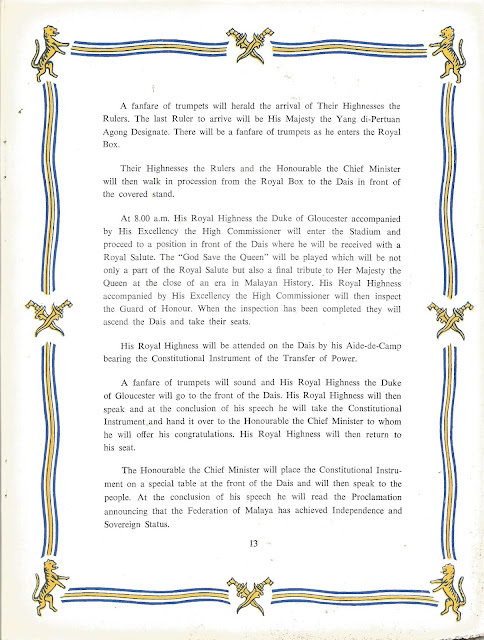 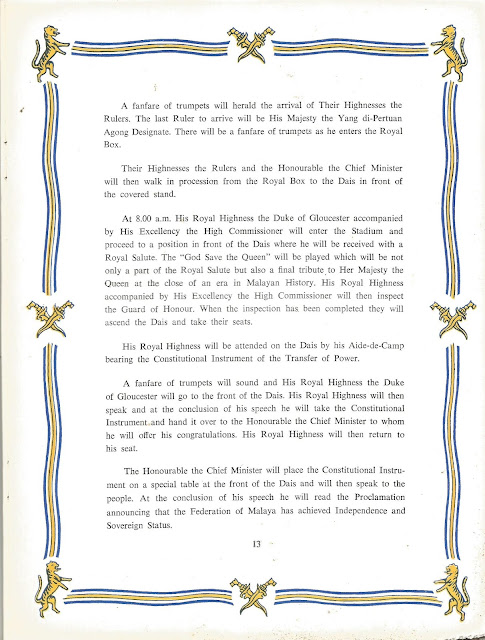 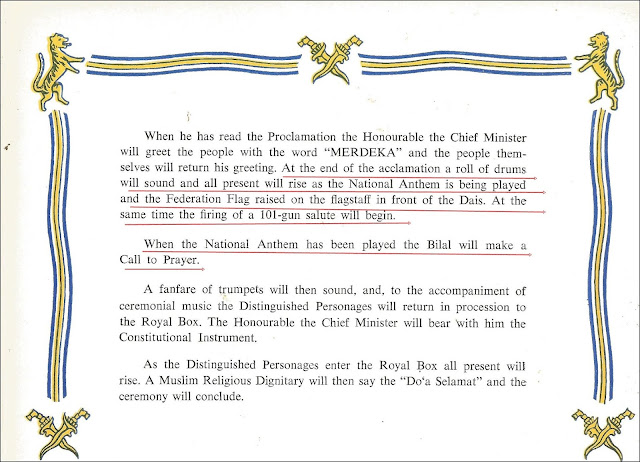 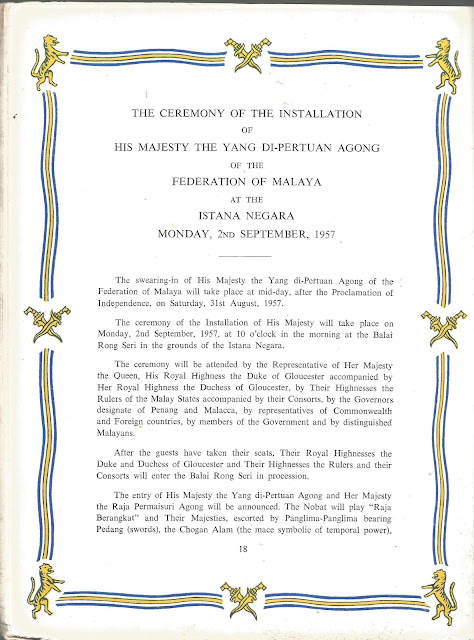 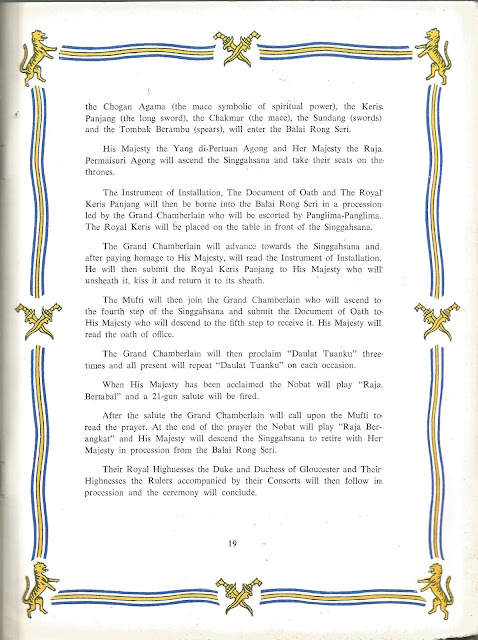 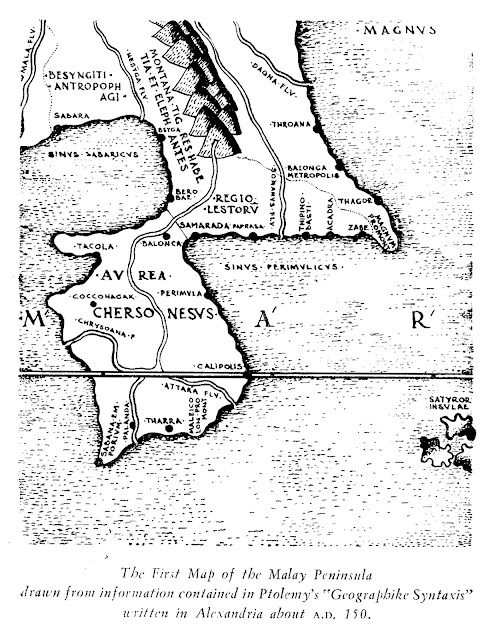 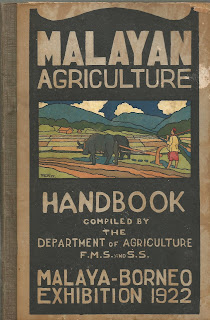 In the wake of the brouhaha over the introduction of teaching Khat or Jawi calligraphy as part of the BM curriculum for Year Four pupils,  I decided it's a good time to think and talk about a key aspect of the Malay Peninsula's culture, heritage and literary legacy which had been marginalised as a result of the policies and practices of our  previous "masters of our fate" during nearly 450 years of foreign colonisation and overlordship.

In introducing Khat, there is hardly any overtone of  pursuing a policy of  language exclusiveness and triumphalism like Singapore's  Mandarin language campaign. 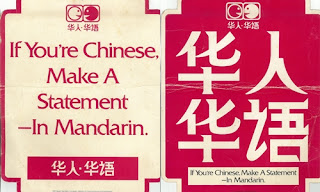 To those who protest so adamantly about Khat and Jawi, people like .......

When I was in Secondary School in Singapore during the late fifties/early sixties, we did not have a permanent Malay Language teacher although Malays made up nearly a quarter of Students for my Grade Level.  The school provided a Mandarin Language teacher and we Malay girls had to sit in during each Mandarin lesson after firstly standing up and making a greeting of  Sen sen chau an when Madam X entered the classroom.  Of course we (as most teenagers do) would natter out of sheer boredom.  Although the four of us were quite subdued in our chatter, Madam X would yell at us "Malay girl sitting at the back, listen to your book!".  Yez Ma'm, Yez Boss, Yez Guv!

In 1961, about a month or two before we sat for our Senior Cambridge School Certificate Examination and the  Federation of Malaya Certificate (FMC) Malay Language Paper, we were directed to Gan Eng Seng School for our Malay Language lessons on a Saturday afternoon.   What was my Grade ye may ask??  I did not fail but I did get an S7 - something I am not proud of.  BUT, the Singapore Government reckoned that was good enough for me to teach in Malay in Sekolah Menengah Yusof  Ishak when I graduated in Geography and Political Science in 1967!!!  Yes Sir, Yes Boss, Yes Guv!

As I went through my twenties and thirties; and through the trauma of Singapore in and out of Malaysia, of the Race Riots in Singapore and the 1969 May 13 tragedy in Malaya, of watching the rising serpent of  racism-cum-discrimination which affected both myself and my pupils;  I had to do a re-think of who and what I am.

That was the beginning of my regret and shame in knowing and learning so little of my language (especially in Jawi), my Malay Literature and the history of the Malays from way before 1511 when Catholic Portugal subjugated the land of my forefathers (and foremothers).

I did try to make a beginning with teaching myself Jawi.  I bought several do-it-yourself books.  This is my most precious  and I shall extract parts from it to illustrate why Jawi is such a significant aspect of the identity of the Malay, an expression that has been so neglected for the past 60 years or more (unlike the Chinese and the Indians who are supported to maintain and foster the calligraphy of their mother tongue).


Here is that book. 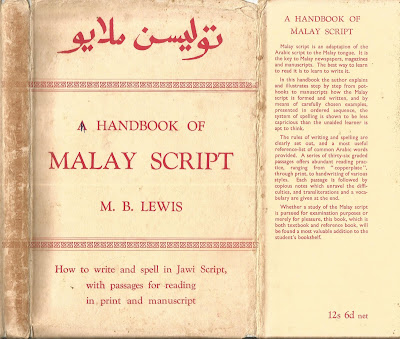 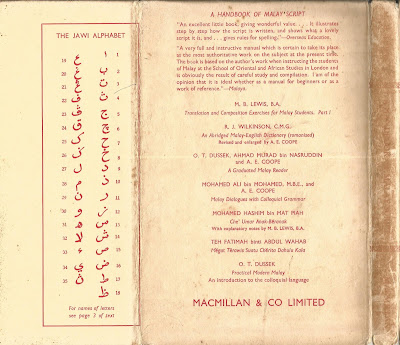 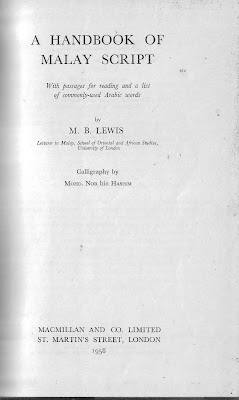 What follows is extracted entirely from M. B. Lewis' book. I have learned a lot about Jawi calligraphy and somewhat unexpectedly, about a wide tapestry of Malay culture, literature, history, socio-economics and homely domestic settings. 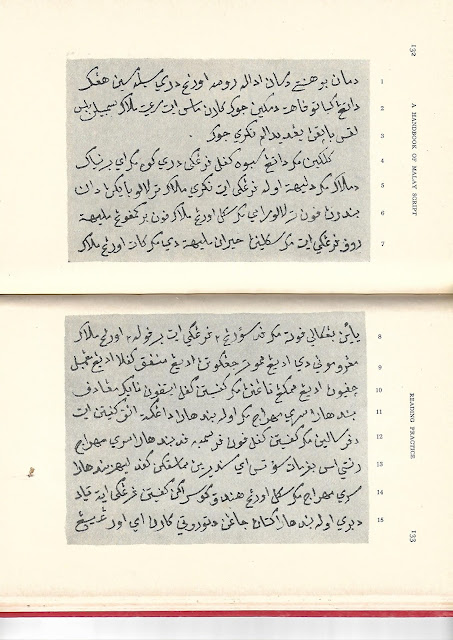 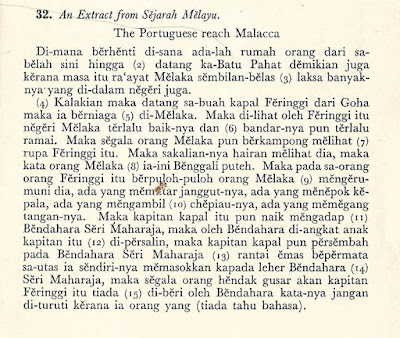 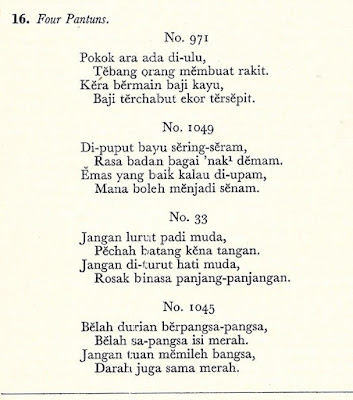 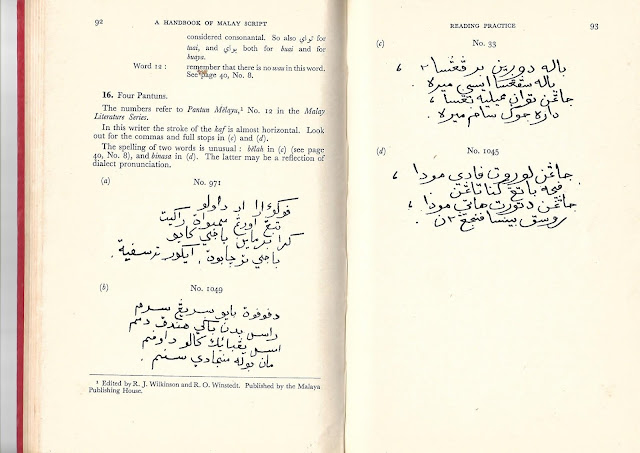 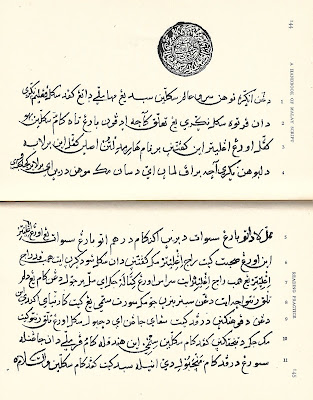 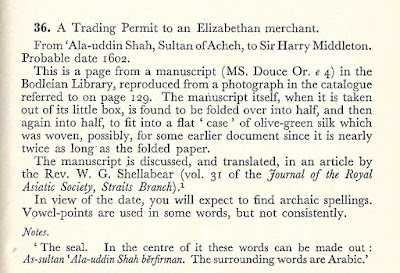 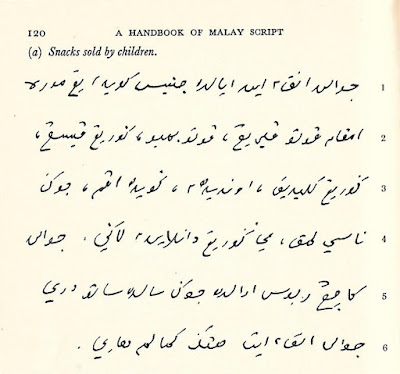 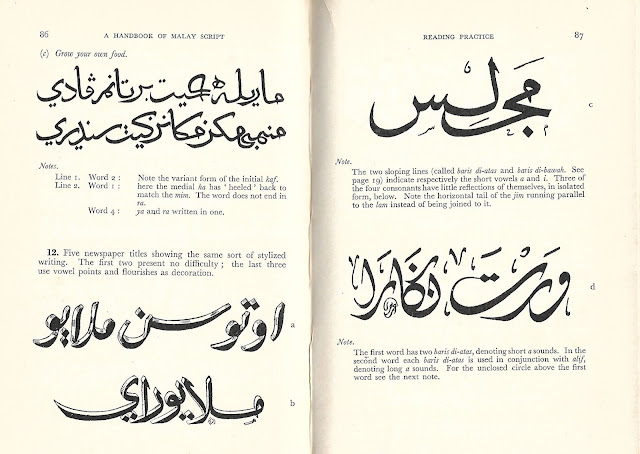 
Finally, a word of caution when showing one's indignation. 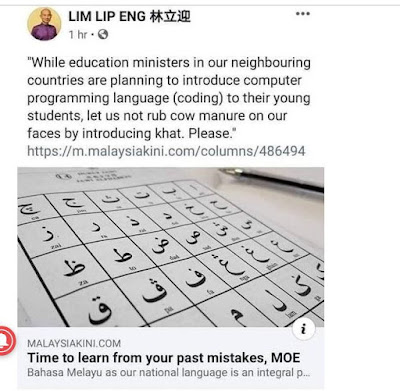 When he used the words 'cow manure', he is of course referring to cow dung which all Malaysians know is a good organic fertilizer, just like horse dung/horse manure. 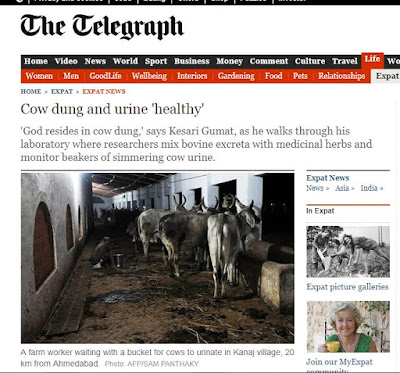