I have finished my postings (which I said I would do) on Remember Me -2 and Remember Me - 3.  But they have to remain in cold storage.

So readers to Ash, you have been warned that this is a deceptive site and and I just might "reveal your personal information, e.g. passwords, phone numbers, credit cards etc".

What does that mean?

From now on I shall only write about food, fashion, celebrities, cars, Bitcoin, property investment ...... and nice fluffy rabbits!!!

What about Sinovac and prezzies and donations?

Can I make a mention of a teeny-weeny bit of Apartheid?

As Malaysia is struggling with the horrendous rise of Covid 19 cases, we and the rest of the world are counting on the vaccines to counter this Third (?) Wave that is bringing chaos to our lives and our livelihood.

As usual, this boils down to accessibility and cost.  Last year we were fighting for ventilators.  This year the saviour vaccine becomes the main issue. Read ... 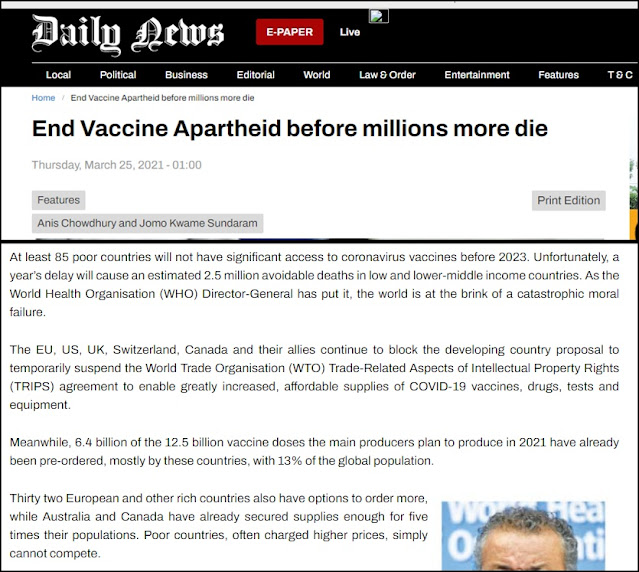 Dr Jomo Kwame Sundaram, of course, is a well-known Malaysian academic appointed to the now-defunct Council of Eminent Persons created by the last Government led by Dr Mahathir when Pakatan Harapan won a resounding victory in the 2018 Malaysian General Election .    Well, Dr Jomo is concerned with vaccine apartheid - but aren't we all?

Just recently and it's still ongoing, there has been quite a bit of kerfuffle with Penang over the Sinovac vaccine.

It seems that Penang has been given 2 million doses of the Sinovac vaccine .... but ..... 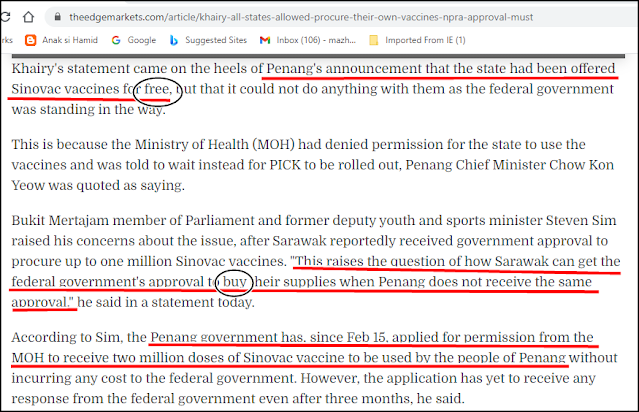 There are several issues here.

1. Sarawak got the approval to buy.  How did Penang manage to get a gift of 2 million doses?  Who is the donor and why the handout?  Surely there is a difference between  a donation and a purchase.

3. Malaysia, on 23 April  allowed conditional registration of Sinovac.  Singapore was still making an assessment on 18 May.

1.  If this Sinovac came free - who is the kindly donor? Is it from an individual or an Institution or commercial benefactor?

2.  Why to Penang only?  Smacks of some kind of special selectivity, or a variation of apartheid?  Is it a reflection of the irresistible charm of the DAP government of Penang?

3.  What if Kelantan or Trengganu received such a  "gift"?  That would be branded as Ketuanan Melayu.

The moral of the story is :  Troy was brought down - after a long siege by the Greeks - when they brought into the city what they regarded as a gift of  a wooden horse that the Greeks had left behind.

The phrase "Trojan horse" is derived from;

Hence we get the term "Beware of Greeks bearing gifts".

But be assured this posting is not a Trojan Horse.

Fingers crossed, I hope big brother does not deem AsH as a "deceptive threat" again.

It's not due to compassion fatigue.  I must confess, as I grew into my 70s (I am now 77) I could not find the strength to carry on writing about Gaza and Palestine.

Thinking and feeling and writing for Palestine/Gaza is like breathing with "glass in your lungs".   [How one lady described the pain of Covid 19.]
Yesterday, Ros, a good friend I met on this Blog, sent me her Hari Raya greetings and her last two sentences said:
"Hope you're both enjoying your raya fare. But it's difficult to swallow seeing what's happening in Palestine."   Ditto Ros, ditto.
Since I started blogging in 2008 - up to 2018 - I have written about 27 postings on Palestine and especially Gaza.
For my readers who are not too familiar with the history and agony of a long-suffering people, I shall try in a couple of postings to compress and summarise the process by which Israel, with the complicity of United Kingdom, USA especially and almost all of the western countries contributed to the emasculation of an ancient, proud and brave people.  That did not take a century or so to achieve, just about 73 years since the end of the Second World War.
There were some brave voices like Edward Said, Noam Chomsky, George Galloway, Tariq Ramadan and so many others;and most recently this Irish MP Richard Boyd Barrett (see YouTube below).
I also have the privilege of meeting Chris, the Caucasian-American husband of another good friend Siti, who I met via this Blog.  Chris spent much  of his adult years as an aid worker in the West Bank, helping, among other things,  to teach English to the childen.  Chris is now 70-ish and is almost crippled by respiratory problems from all the tear gas he and his pupils were subjected to by the IDF (Israeli Defence Force).
Siti sent me this video at 7 am this morning.  Through Siti, I am in touch with our common concerns and interests, issues like Palestine/Gaza and Islamophobia.
A CAVEAT. It is necessary - almost compulsory - that when you embark on any attempt to speak up for the Gazans and Palestinians , you have to declare you are not anti-Semitic.  I am not anti-Semitic or anti any one because of their colour or their religion or race.  Those like me who criticise Israel - a Goliath state against a 'David' political entity like Palestine/Gaza - for their racist/apartheid policy are not anti-Jew or anti-Semitic. We take up cudgels for the underdog, any underdog, in whatever shape or size, or form or colour.
I have written 27 postings and I cannot find any more words to express my thoughts for Palestine/Gaza without repeating myself.  This - at this time of our celebration after fasting in the holy month of Ramadan - is all I can put together. In no way can this shed any hope or light for our fellow Muslims in Gaza.  Unlike Chris who puts his money and health where his mouth is, AsH is just a keyboard supporter, albeit after some years of  dashing from Leicester to London, a hundred miles away, with the spouse, attending protest marches and meetings in support of Gaza and Palestine and the anti-war movement in the capital.  Then; the spirit and the flesh were able and willing.  Today, only the fighting (but weary) spirit is left.  I have to exchange the streets of London and Leicester for just this keyboard.
All children deserve a happy and secure childhood.  I was blessed with that and so did the spouse and all of our extended family in Malaysia and Paekakariki, New Zealand.
Here are the voices of children from Palestine/Gaza.  Remember Me they ask us. 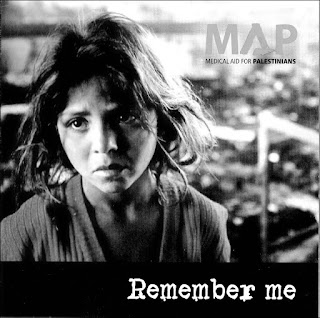 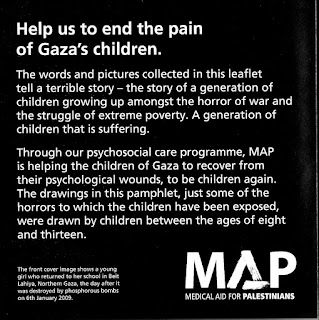 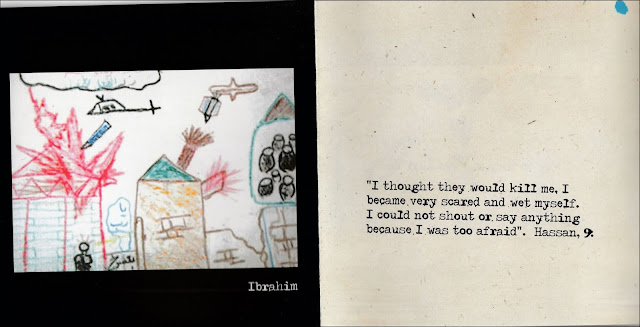 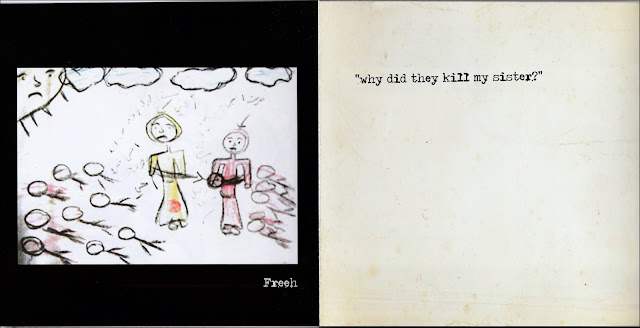 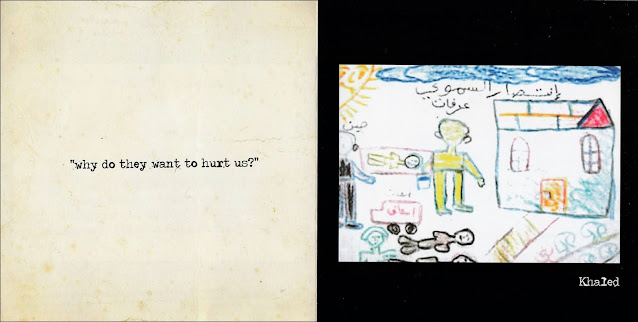 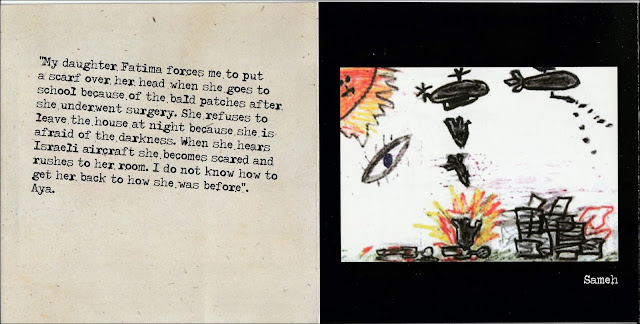 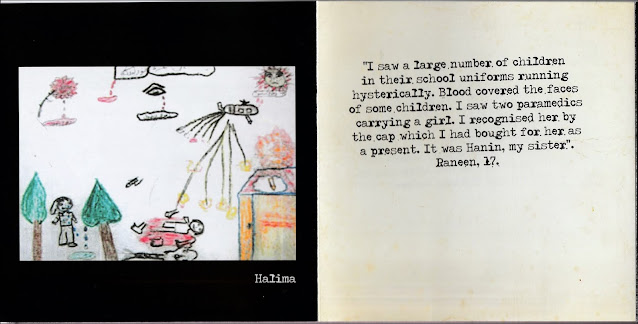 The spouse and I are life-long supporters of MAP (Medical Aid For Palestinians).  Since 1990, they have been sending us their newsletters and  Annual Reports.  This came, if my memory serves me well,  after the 2008/2009 attack by the IDF.

I wonder if these children managed to grow into adults, unmaimed and healthy.  And if they did, I hope they are still alive and keeping up the fight for their homeland.

Tomorrow MCO 3 goes into full swing. The Malaysian public is divided about the need for another lockdown, especially with Hari Raya just a few days away.  I am sure our fellow Malaysians who celebrate Christmas, Chinese New Year and Deepavalli would be able to put themselves in the shoes of their fellow rakyat, the Malay-Muslims, and commiserate with their frustration..

It will be especially painful for our small businessmen, our stall holders at Bazaar Ramadan, our food gerai  and all who are trying to make ends meet. To compound this, there can be no family get-together.  Let's not even begin to quibble about the numbers - Hari Raya visitors and visiting are out, fullstop.

Life or Livelihood?  This spread of Covid 19 is not peculiar to Malaysia.  Even our southern neighbour has had a rise of numbers.  But we have been especially irresponsible in not maintaing the SOP, in not wearing masks - we have become careless and complacent.

Perhaps, in Malaysia, there is no sign of that triumphalism, of that trumpeting of imagined victory over Covid 19, that has blighted "the world's largest democracy" in the past few months.    But we were getting that way, especially with Ramadan and Hari Raya on the way.  It would be simplistic to blame increasing infections entirely on Ramadan and Hari Raya.    A lack of self-discipline and civic-consciouness is common to most Malaysians..

Yesterday we had our three-monthly appointment with the spouse's Consultant.  He looked a bit wan, not like his usual breezy self.   He has been the spouse's doctor for nearly 13 years, ever since we partly-settled in Kuala Lumpur

He told us, to our horror, that almost a month ago, he and his wife had been hospitalized for 6 days because they were diagnosed as Covid positive.  They are in the clear now.

Our first question, how did they pick this up?

Four generations of his family had gone to an air-conditioned restaurant to celebrate his wife's birthday and after they got home his wife began to show the early symptoms of Covid-19.  The authorities set all the wheels of treatment and  tracing in motion.    The infection was traced to six of the workers and the restaurant was closed for six days.    And all the other customers were traced and checked.    Kudos I think, to our Health Ministry for their brisk and efficent action.

I suggest we remember, this Hari Raya, such civil servants in the Ministry, the frontliners in the Hospitals, the clinical technicians, our ambulance drivers and our policeman for their dedication and commitment.    And especially for not "just sleeping and eating" - a brickbat often thrown at them by some of our enterprising and hardworking (and tax-paying) fellow-Malaysians.

But I have this one nagging and frightful concern.  Our consultant has seen hundreds, perhaps thousands, of patients in his hospital since the Covid 19 pandemic began early last year and he was quite unscathed by the virus    It took a birthday dinner at a local restaurant during the conditional MCO to bring on the infection.

It might never have happened, if the restaurant management had kept a simple check on its workers - and made sure that they were clean and Covid negative.

All it requires is a sense of personal and social responsibility to our fellow rakyat.

The absence of this is why MCO3 is back again.  We were asking for it!!