Wake up AsH. Get a hold of yourself. You've been besotted with 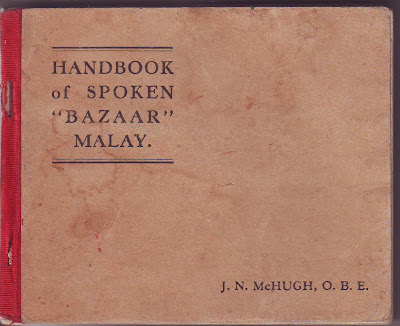 since you've been dis-eased.

This was given to me by Ru and Lesley some years ago. 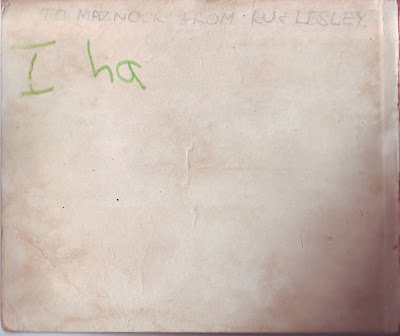 They were the spouse's former students

(thank you for the photo Irene)who went on a tour of South East Asia after graduation. This handbook was given to them by a relative and we spent many hours laughing at the contents. I also found it useful when I wanted the spouse to get on with his chores! I would command "SEE-ap MA-kan. SA-poo LAN-ty. CHOO-chee BY-by" and other useful sentences to get men working.

Ru the Radical added this to the glossary. 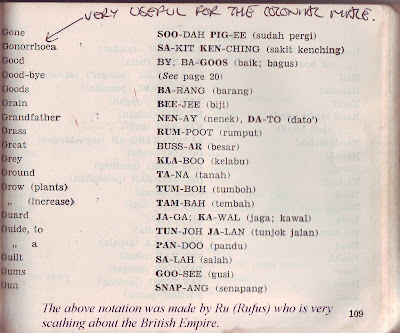 And this was found on the inside back cover. 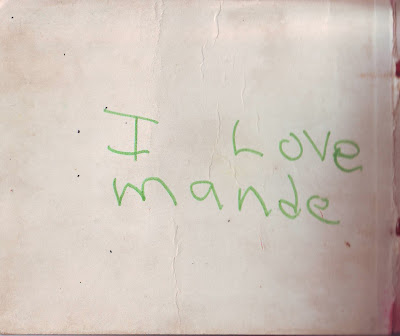 And we all love you too, dear Mande, who ever and where ever you are.

TRANSLATION INTO BAZAAR or BIZARRE ENGLISH of the above:

It has been two weeks, very much sick. Got no fever, hot or cold. But head aches and also cough, cough a lot. Head so heavy like iron.
Today, feel little good.
But can only write easy stuff to make people laugh - those crazy enough to read this blog.
Help!
Now, this Malay woman very tired and vacant in the head. I am yawning.Must go sleep.

ON COMMANDS : Get the meal ready. Sweep the floor. Clean it carefully. Chop chop!
Posted by anak si-hamid at Sunday, August 29, 2010 4 comments:

As if of one mind, we looked at each other and the message was - we must find out what this child was doing here at this time of night. We got him to our table, saw his book of donation tickets for a school-orphanage and noticed that he had sold only 3 tickets. So these five Singaporeans, an Australian, a Brit and two Malaysians bought up the remaining tickets. He wanted to give us a CD - that was what the $10 ringgit was for. We asked him to keep it instead.

Just before he left, Oi Bek (a Singaporean) said to him in her best Malay, "Jaga duit ini baik-baik, jangan nanti hilang." as she pressed into his hand a couple of red notes saying, "Ini untuk makan awak, ya?" Translation: Look after this money carefully, do not lose it. This is for you, to get some food.

After that, you could say we should be looking for a halo around each other's heads; but we were feeling lumps in our throats and trying to hold back a tear or two because this loving child should be under a safe roof somewhere, doing his studies or playing with his pet cat. Why is he here?

After the girls left on Sunday I took out one of the tickets.

Out of curiosity I decided to google this Pusat Tahfiz Amal(PTA). As I clicked from one item to another my heart sank deeper and deeper. I got into several blogs describing encounters with students from PTA selling posters, calendars and CDs all over the Peninsula especially in Kuala Lumpur and Shah Alam - and even as far as Sabah! Most of the bloggers were concerned about firstly, the safety of these children who ranged from 9-15 years old; secondly, was the PTA a front for some other nefarious activities? I also came across newspaper reports but let me itemise the nitty gritty.

1. On 29 December 2006, five children were killed and three were injured in an accident which involved the children's PTA van and a stationary vehicle along the North-South Highway near Sungkai, Perak. They were on their way 'home' to Kedah after a 'Donation Drive'.

2. Shahriza Abdullah of Utusan Malaysia reported on 31 December the Chief Minister of Kedah Datuk Seri Mahdzir Khalid as saying that the relevant authorities like Jabatan Kemajuan Islam Malaysia (JAKIM) and the police should carry out a thorough investigation and to issue directives for immediate action.

3. Malaysia Today on 20 January 2008 recorded an official letter of complaint from Sameer Khan bin Shajehan Khan regarding the mismanagement of orphans in PTA to the Ministry of Women, Family and Community Development.

4. Opat Rattanachot of Utusan Malaysia , reporting from Sungai Petani on 7 January 2008 wrote about some students aged between 8-12 and in school in uniforms asking for donations from the public. He spoke to one of them who explained that they were doing this to help finance their PTA who had given them a home, food and education.

5. Blogger Shahrul Azmi (http://shahrulazmi.blogspot.com ) posted on 19 August 2009 another encounter with students from PTA. When he contacted by phone Majlis Agama Islam Kedah (MAIK) he was told PTA had closed. When he asked for official documentation he was told to leave his number for someone to speak to him.

He then made another call to Jabatan Agama Islam Selangor (JAIS). He managed to locate the bureaucrat who told him amongst other things, that JAIS "don't give any permission to Pusat Tahfiz Amal on collecting donation." and "JAIS cannot do anything coz there is no enactment allowing them to take action." He then advised the blogger to report the matter to the police. The blogger felt that that was his (the bureaucrat's ) job. And rightly so!

IT HAS BEEN ALMOST FOUR YEARS SINCE THE TRAGIC ACCIDENT THAT KILLED FIVE INNOCENT YOUNG CHILDREN FROM PTA. NOTHING HAS CHANGED.

This Ramadan, the well-heeled and well-off will once again look forward to breaking their fast at Ramadan Buffets at the many Restaurants and Hotels in all the main cities and towns where they're quite happy to stump out from $28 - $75 per head for the privilege of Iftar away from home. As they glide from table to table stacking up their plateful of grub, they can rest assured that the comestibles are absolutely halal.. I have seen on TV the religious bureaucrats checking the hotels' kitchens, refrigerators and store rooms to ensure the halal-ness of the food and they have also issued a list for the punters to scrutinise! 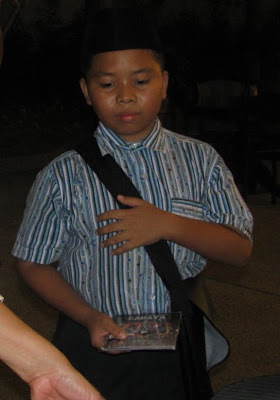 and others like him shall never ever have to walk the streets, night or day, touting for donation-sales for their school-orphanage.

These dismal shadows, if left unchecked will evolve into a cancer, not only for PTA. These children and all other oppressed, abused, and poverty-stricken children need a safety net. Malaysia is not a poor country and Malaysians are generous people.

(The words 'fondling their own self-esteem" are borrowed from John Pilger.) 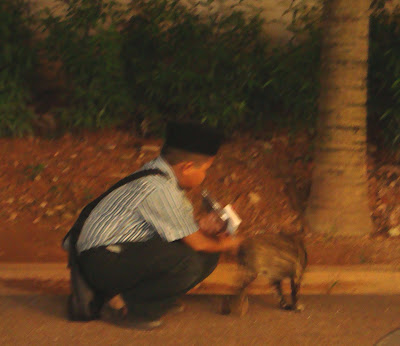 This touching scene was taken on the night of the Rainbow Band Reunion Dinner two weeks ago.

We could not help but notice this sweet child spending a good ten minutes or so gently stroking and playing with this stray cat. It was so obvious they loved each other's company and we all felt such a rush of joy and hope in watching this beautiful encounter between two innocents.

I wish I could leave the story here. But there's a lot more.

I've been wanting to complete this story for weeks because the dismal shadows behind this tender picture have been tearing at my conscience.

But I've been laid low by racking coughs and a head that feels like it's been caught in a tight vice. I have not had it this bad for years.

I will get it done as soon as I can get my phlegmy brain to move from back to front or inside out? It's not a new story. It had been in the papers and blogs for a couple of years.

You knew about it, didn't you Din? Thank you for keeping us in ignorance and giving us those moments of pleasure with that lovely child and his tortoiseshell cat.

He is forever and ever a little angel and I pray he will have a happy life which can also include a cat.

Escape from Being "Deep-eyed in Gore"

It had been a traumatic week in Penang. I might write about the gory details - but not tonight.

Instead I prefer to share the contents of this book dated 1936.

It's nostalgia, it's about the way we were (or perhaps my father's generation), it's about learning the colonial language and the methodology of those days.

But for me, I love the pictures and how they imitate scenes from English textbooks and landscapes. As for the colour illustrations, the almost sepia-like features give a touch of time and dignity to simple scenes.

According to this Primer : "Before beginning this book, which deals with the commonest of the phonograms, the children should have had abundant practice in reading regular words containing those sounds. The teacher should provide this by means of large reading cards prepared as they are needed and pinned to the Blackboard. Even at this early stage she should take care to avoid sentences which arouse no interest". Blackboard ?? The teacher is assumed to be a 'she' - of the loving and caring kind.

Here's my choice from this special book which had been viciously attacked by silver fish and book worms. But it's still precious. 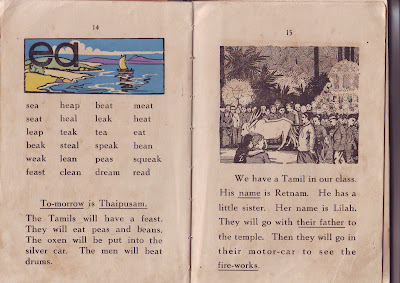 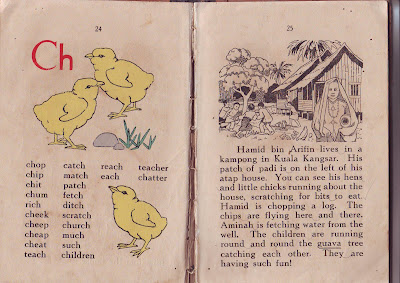 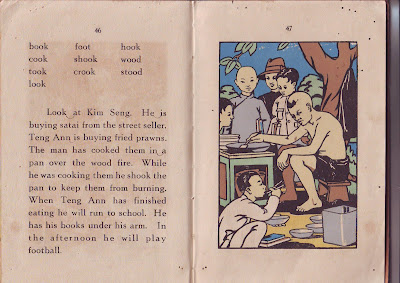 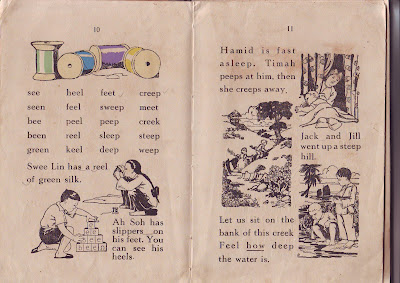 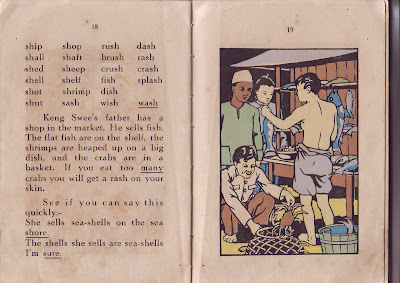 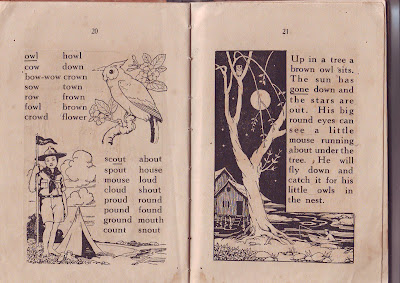 The last two are my favourites. Finally,

SELAMAT BERPUASA TO ALL from AsH of yore. 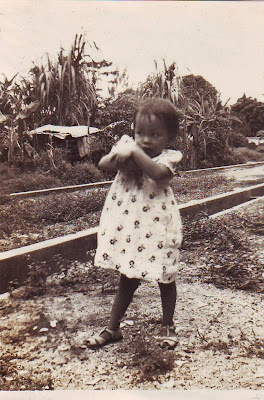