My celebrated Settee and Yuwrajh's pop-in

We  met him last about 5 (?) years ago in London.  Since then we have made several contacts via email as he was ambling and moving  between London, New York and Singapore.

A few days ago we received this email.

We replied and then received this reply.

Two days ago, Yuwrajh arrived.  He had walked all the way from the Railway Station (about 15 minutes walk) to get to No. 43, just too early by almost three-quarters of an hour.  With his usual wicked humour the spouse told Yuwrajh he was too early, so could he please leave and then return at the right time.  I just had to thump him (the spouse, not Yuwrajh) and he backed off in defeat.  Woman power yeah!!!

Through the door, there came familiar laughter
I saw your face and heard you call my name.
Oh my friend we're older but no wiser,
For in our hearts the dreams are still the same.


Yuwrajh stayed over for just one night but we had a lot to catch up on - on old and new - on ups and downs - on here and there.  We ended the day with a marathon chinwag from 9 pm to 2.30 in the morning and this continued the next day until his departure.

I walked him to the Railway Station at 2.30 pm on that sunny, lovely summer's day.  I waved him good-bye as he sets off on his life and dreams - to where ever it takes him.

We hope to meet again InsyaAllah, in December this year in Kuala Lumpur and this time he can re-visit the old settee ( a lot of our conversation revolved around that venerable piece of furniture) and sit and lounge on it like so many people have done for many many years.

Abah bought that settee, second hand,  from a Eurasion neighbour when we were living at Kampung Chantek in 1947.  It had travelled with the family from Kampung Chantek to Pasir Panjang Road, then to Jalan Mas Kuning, Jalan Giam (Johor Baru), Boon Lay, Batu Pahat and finally to Setiawangsa.  I have been the Settee's caretaker for a long time and I hope the grandson for whom it had been destined will cherish it when I am busy pushing up daisies.

The Saga of the Settee

Yuwrajh, thank you for your company, for finding the time to catch up on your ole Miss Hamid, the wicked witch from Jurong Secondary School.

You have given me two wonderful days to make up for all the harrowing daze (no, it's not a spelling mistake) from October 2017 to 20 May 2018.

The Day of the Lickspittles

Assalamualeikum Malaysia. Za-o-an, Vanakkam, Good morning Malaysia.   Hope I got all that correct.

The UMNO circus has folded up and a new one is taking its place.

Like the Emperor in the nursery tale, Malaysia has got on new clothes.  A new Party, a new Government and administration but the same ruling class.  Only the makeup and costumes have changed.

So, move over Barisan or to be more precise UMNO.   The Party's over.


There has been a revolution, an incredible coup led by a nonagenarian, one who had once held that power before for 22 years under the aegis of the Party he defeated..  This is indeed a record in Malaysia and in the world!  Malaysia and the man himself - the new Prime Minister Dr Mahathir - can take pride in that.

The new administration shall commence with a big celebration and a public holiday on Thursday, Friday and the extension into the weekend is such a deserving reward.

Malaysians can now look forward to a promised lower cost of living, life with subsidies intact, life without the abominable GST. In 100 days, you can fill up your trolley with all the supermarket goodies (as can be seen in the video above) without making a big hole in your wallet.  Then you can jump into your car and drive home in peace because the subsidy for petrol is back again.  It will all be cheap, cheep, cheep, like life for Singaporeans shopping in JayBee.  Lucky lot these Malaysians.  No wonder the British Press are so disapproving of us.

I do wish David Cameron or Tony Blair would make a a U-turn, co-habit with and lead the Labour Party ( for Cameron) and Conservative Party (for Blair) and rescue us from VAT and and rising costs.

VAT (or GST)  at 10% was first introduced in 1973.  People squeal whenever the Government puts up the VAT.  But it is a handy and safe way (for political parties) of raising revenue, better than raising taxes, especially Income tax.

Paying VAT for your purchases in UK  has become like air mandi.  Paying the earth (literally and metaphorically) for energy, which includes petrol (for your vehicle) and gas (for your cooking and heating)  has become part and parcel of living and loving and laughing and loathing in UK.  Yesterday I had to stump out this  20% Vat for my Ink, and the same amount for shopping at a Charity Shop like British Heart Foundation. 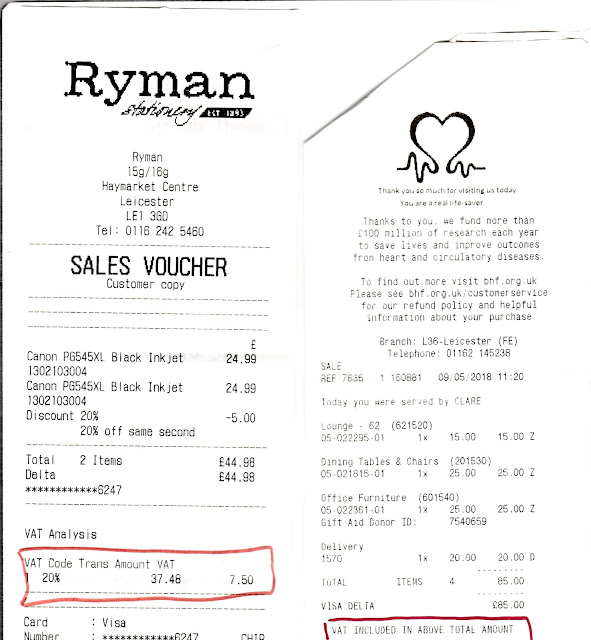 In these hard times, I hope the the new government will make a more strenuous effort to retrieve the money owed by the recipients of the NEP who I reckon reside in the highly urbanised states of Johor, Negri Sembilan, Melaka, Selangor, Perak and Penang.


Three days ago we had to deal with a crisis.  Osman (just recently retired roadsweeper), our good friend and saudara angkat  contacted us (with the help of our good neighbour, Zarina and Kenny) with the news that his son Hafiz was in a critical state in the Ipoh Hospital with just a 50-50 chance of survival.  He had been to the smaller hospital at Teluk Intan, had a diagnosis and then told to go home and 'recover'.  The next morning he collapsed and was rushed by ambulance to the hospital at Ipoh.  They live in Kampung Ayer Kuning, near Kampar.

Syukur Alhamdulillah, Hafiz is out of danger but still critical and in a coma in the ICU.  Why Man, I agonised.  His 16 year old daughter died of cancer that was not properly diagnosed which I reckoned has to do with being where they live.

Here in Britain they call it the post code lottery when it comes to proper health care. The quality of service you get from the NHS depends on where you live.

His wife Aisha passed away just a year ago.

In Malaysia we believe we are all equal.  There are some who believe they are not getting enough  'equality' and in  a country like Malaysia there is  space for them to make a lot of noise and clamour to demand more equality and freedom.  But as told in  Orwell's "Animal Farm" : 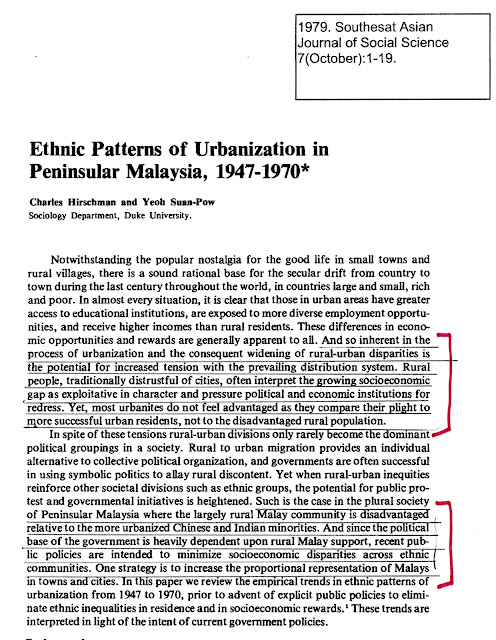 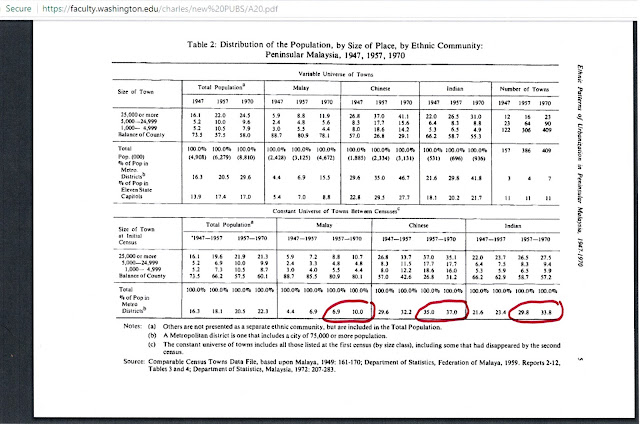 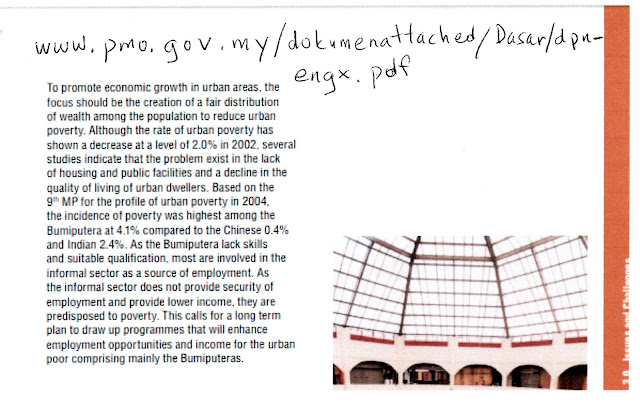 The road to Man's kampung from the main road was just a pot-holed laterite road which spewed dust and dirt whenever cars and motorbikes got on it.  There were of course no buses for that unprofitable  route, but even taxis refuse to drive into Kampung Ayer Kuning.  Man and Aisha would walk down that road whenever they balik kampung to see their children and family.  You see, they represent part of  that 4.1% poor Bumiputeras in the urban centre of Kuala Lumpur - migrating to the city to be wage-earners so as to build up a better life ( i.e having a cash income) for their two children and family in the kampung.  They lived for some time in Puchong and would leave their rented dwelling at 4.30-5 am so as to start work at Setiawangsa by 7 am.

Their kampung did not get a proper road until about 10-15 years ago, more than half a century after Merdeka inSemenanjung Tanah Melayu !

My Abah, a founder-member of UMNO in 1951 at Pasir Panjang Singapore always reminded us of our roots, of our Tong Pao, as the Chinese would describe it - of not turning into Kacang lupakan kulit - doing and giving what we can for those in need, to animals and humans of whatever shade and hue.

SHAME ON YOU UMNO for betraying the ideals and sacrifices of our forefathers, of those Malay gentlemen and women of long ago.  If UMNO does not learn anything from GE 14  and turn its house inside out and back to front, then they might as well make a U-turn and join the PH.  Sad to say, my people are extraordinarily adept at running with the hare and hunting with the hounds.


But Malaysia, you can stand proud today.  You had  a peaceful, well-fought election - something just as credible and maybe even more so than Trump's election.  Whatever The Guardian, The New York Times, The Times, The Daily Telegraph, The Washington Post and The Independent choose to write - the usual snide, derogatory, and self-righteous diatribe, borne of an inherent hostility towards this Muslim-Malay nation - we have shown dignity and style.  The Opposition won a clear majority and the outgoing Barisan demonstrated grace despite this momentous loss.  No tantrums after losing,  unlike the post GE 13 Elections.  No angry demonstrations like after Trump's triumph.  No tanks and army trucks roaming Putrajaya and the streets.