Caution:  There is a point to this long pictorial posting which you will discover towards the end.


2. What could be more  meticulous than this drawing?


3. What could be more  joyous than remembering :

......  and this image was prompted by this 1948 (?) photo of her brother Mustapha taking a walk with Macik Ayik at Kampung Chantek, Dunearn Road. 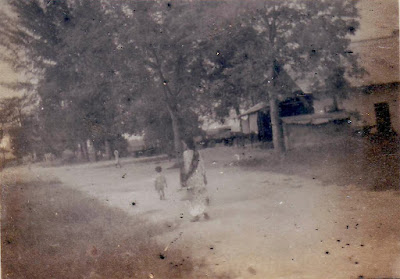 2.  Here is a tikar  in the making, from Fatimah's Kampung . 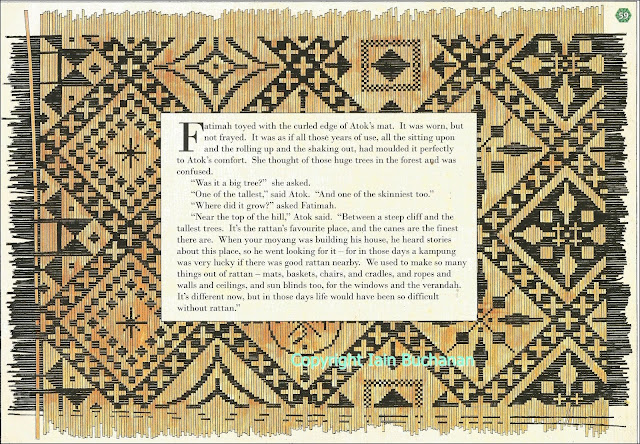 AsH had such fond memories of the tikar on the floor - whch was much more flexible and portable than a sofa bed.  " It was as if all those years of use, all the sitting upon and the rolling up and the shaking out, had moulded it perfectly to Atok's comfort."


3.  AsH was a tomboy - with breaks in between  - like putting on the school uniform, or for Hari Raya or family outings.  Nevertheless she treasured the plywood doll house that Abah made for his two little girls.  The spouse drew this doll house for Fatimah, which looked more posh and traditional. 
4. What could be more  unforgettable than Busu's wedding in the small town where I was born. Like  many Malays from the kampungs and small towns of Malaya in the 1950s, the opportunity for employment was not in the shops or industries in Kuala Lumpur or Penang or Ipoh or Seremban or Johor Baru.   Their best chance was to enrol in the Police or British Armed Forces. Here, they did not merely "square bash" on the Parade Square.  They learned a trade, depending on which unit they joined.  They acquired discipline and initiative and enterprise.  When I was teaching at Sekolah Menengah Yusof Ishak from the late 1960s, I could not help but notice how the children of these soldiers were far more hardworking and enthusiastic about learning..  Their turnout was always clean and smart, their homework was always submitted on time and they gave us teachers far less disciplinary problems.

Busu Kamaruddin bin Moin was one of these enterprising Malays from Selangor.  He enrolled in the RAF (Singapore) and with a steady and secure income he was able to give some financial help to his much-loved kakak, our Macik Munah and her family.  Her greatest joy was to see her  adik bongsu married.  Between them there was not much money to be had for Busu's big day.  Her cousins (all male, including my Abah) offered and gave some assistance but they were determined to make it on their own.  It was a simple and unforgettable wedding.  Busu was a quiet and sweet uncle.  Ma'Busu was a lively and loving aunt.  This photograph says it all for us and the extended family.


To commemorate this special event the spouse recreated the above photograph - by drawing it in  hundreds of thousands (perhaps around a million) black dots (to imitate pixels).  He was determined to be absolutely computer-free and this was the result.


5. What could be more  yummy than the finger-licking taste of durian from the kampung?


Abah's colleagues and students would come back from home trips to the kampung and we would be feted with our favourite durian, rambutan, mangosteen, ikan sepat from the sawah, tempoyak, kerdas and petai.  He would tell us stories about durian-hunting in the kampung and that inspired this drawing .....


6. What could be  a greater tribute to Allah's creation than to imitate the beauty and glory of the forest in these images? 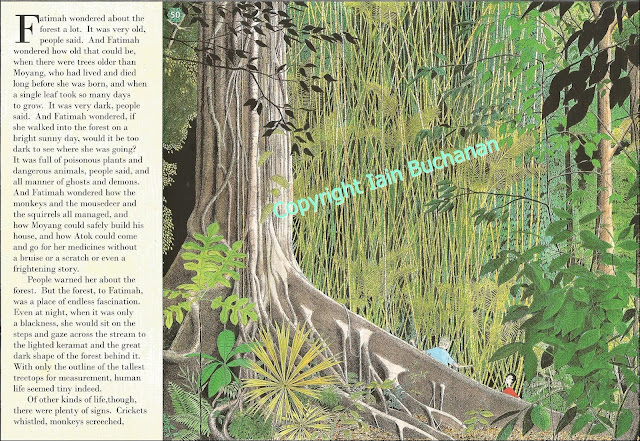 7. What could be more  devastating than to see this splendour  destroyed by man and his greed? 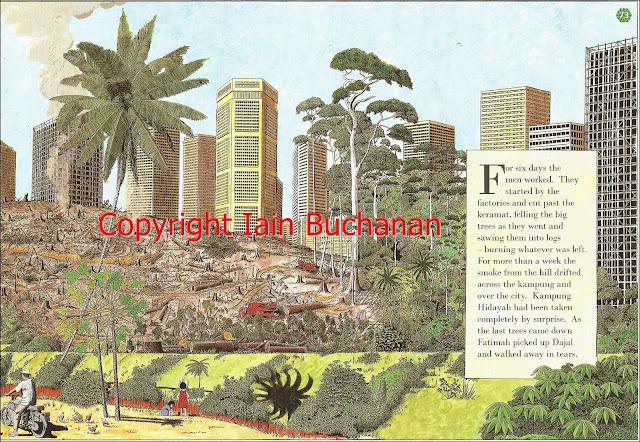 8. What could be more  graphic than this geographer's portrayal of the 'development' of his wife's tanah air through an LRT window?

9. What could be more  loving than one man's love for his Malay wife and her tanah air to set out on an 8-year labour of love to write an illustrated story of Fatimah's Kampung ? 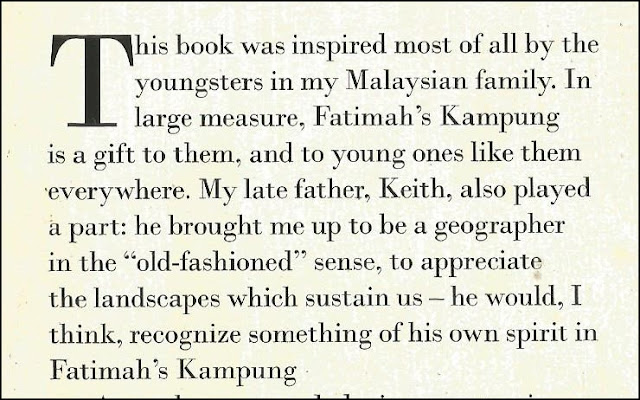 For my 70th birthday the spouse drew a series of pictures for his little tropical flower - my favourite, the bunga tahi ayam.   This one is the best. 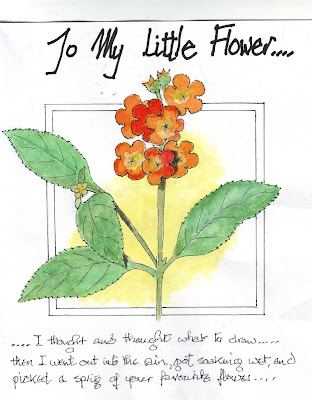 Today's posting by AsH is quite unusual.  Made up mainly of a series of  illustrations from her spouse's book (published in 2008) AND smothered with 'copyright Iain Buchanan' on each one, readers may be forgiven if they think proprietorial AsH is touting her husband's book.  Well, if I am publicising and hawking Fatimah's Kampung I should have done that years ago!

I merely desire to explain the learning, the research, the skills, the patience, commitment and especially the love that went into Fatimah's Kampung by Iain Buchanan - Ash's soulmate!

In a quaint and depressing way, this posting is to illustrate another piece of Malay Malady.  I am angry, I am ashamed, and I am sad when I have to face the extent to which a member of my bangsa has such cheek to pilfer someone else's toil and labour to earn a living and to profit from such an act of cheating.

My good friend and neighbour, Zarina puts it so neatly, " Kak, to our Malays, only arak and babi are haram!"

10. What could be more   despicable than this?


The above was plagiarised and purloined and corrupted into this 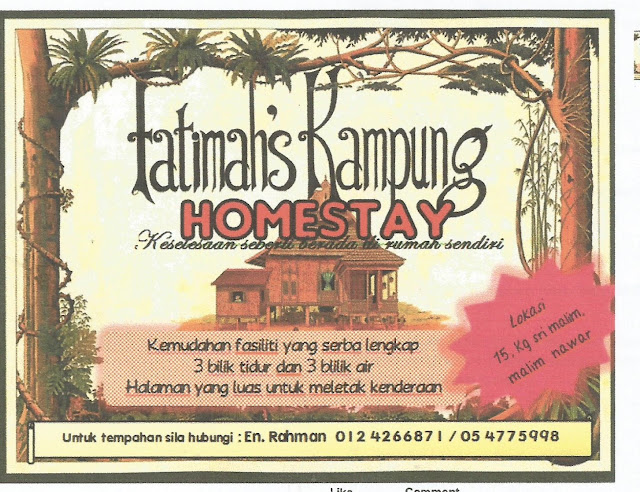 No wonder Information Technology is such a popular subject in Malaysia!

By the way, this business was given a leg-up in Utusan Malaysia February 2014. 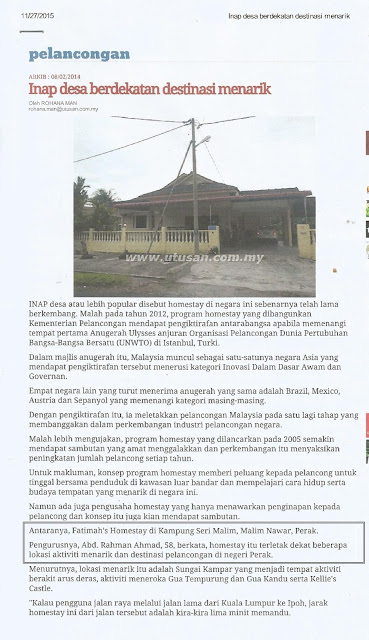 And now a song of apology and comfort from a Malay wife to her  Scottish-English husband.

When the corporeal parts and trappings of  the Malay-Muslim's garments,  physical appearance, titles, education, talent and wealth are removed, we all look anatomically the same - in the eyes of God, and to the worms that consume and recycle our earthly flesh.  Ashes to ashes, dust to dust, so to speak.

My people - kings and ministers, tycoons, paupers, CEOs, and Directors, managers and supervisors, taxi drivers, road sweepers,  soldiers, policemen, farmers and fishermen, should take a  look at the image below and try to realise that is what they all look like inside when all the flesh and blood turn to mush.

"Alas, poor Yorick.  I knew him well" said Hamlet when he picked up Yorick's skull at the graveyard.

If only I could express that same sentiment when I encounter - in the flesh - some of my fellow-Malay men and women.


After that brief euphoria in my last posting I find myself back in the pits of another Kafkaesque engagement with Malaiseian bureaucracy.

Just last week on Thursday in a certain government department, we had the bizarre privilege of encountering a government Pegawai  - a government servant - whose explanation of the convoluted workings of his department  was injected with repeats of  "Dengar!", "Dengar Sini!", "Dengar ya!" in a tone that you would use to a dog or a cretin; who very ostentatiously rolled his eyes and looked to Heaven when I started to explain myself; and who shared smirks with the female officer at the next counter - who broke out into giggles at our predicament.

But from last week's experience it seems to happen across the board.  Is it because Malay-Muslim females are somehow an inferior species?

Anne - my stepmother-in-law -  gave me this advice when I lamented about the racist abuses thrown at me in Leicester.  "Just visualize these sick people sitting on their toilet with their trousers draped around their feet!"

So, what vision do I create?   I reckon this pegawai to be in his early 30s,   Let me picture him as a snotty toddler wrapped in his kain lampin.  Thirty years ago, throw-away nappies like Pampers were not in vogue except for very select parts of the urban elite.  And thirty years ago, I had just finished my Masters and was embarking on a new life as a married and retired ex-teacher in Leicester.

And now, in a government office, he is being publicly rude to me in front of his female junior colleague.  I suppose I could be his grandmother's age and if he had been a Malay-Muslim Singaporean his emak and  bapak could have been one of my former students.

I guess I was so upset and too stunned to recite this bidalan to him.

But then what's the point?  Too many of our young(er) selfie-and-self-obsessed anak bangsa have lost the art, the sound and rhythm of their cultural background to modernisation, to arabisation, to occidentalisation and to nihilism.  The Lunchais are bobbing on their Labu-labu - long live the me-layu!

The Chinese maintain their tong pao ( of the same womb).  The Malays are divesting theirs into the tong sampah.