Notes from a Bookworm

It has been some time since my last posting.  I've been caught up with a big kemas-kemas of my collection of books.  March and April have been ingrained into my psyche - for embarking on a spring cleaning of  whatever looks the messiest and this time I have targeted my most favourite hobby -   my hoard of books.

It started with this - plonking the books from the shelves on to the floor ..... 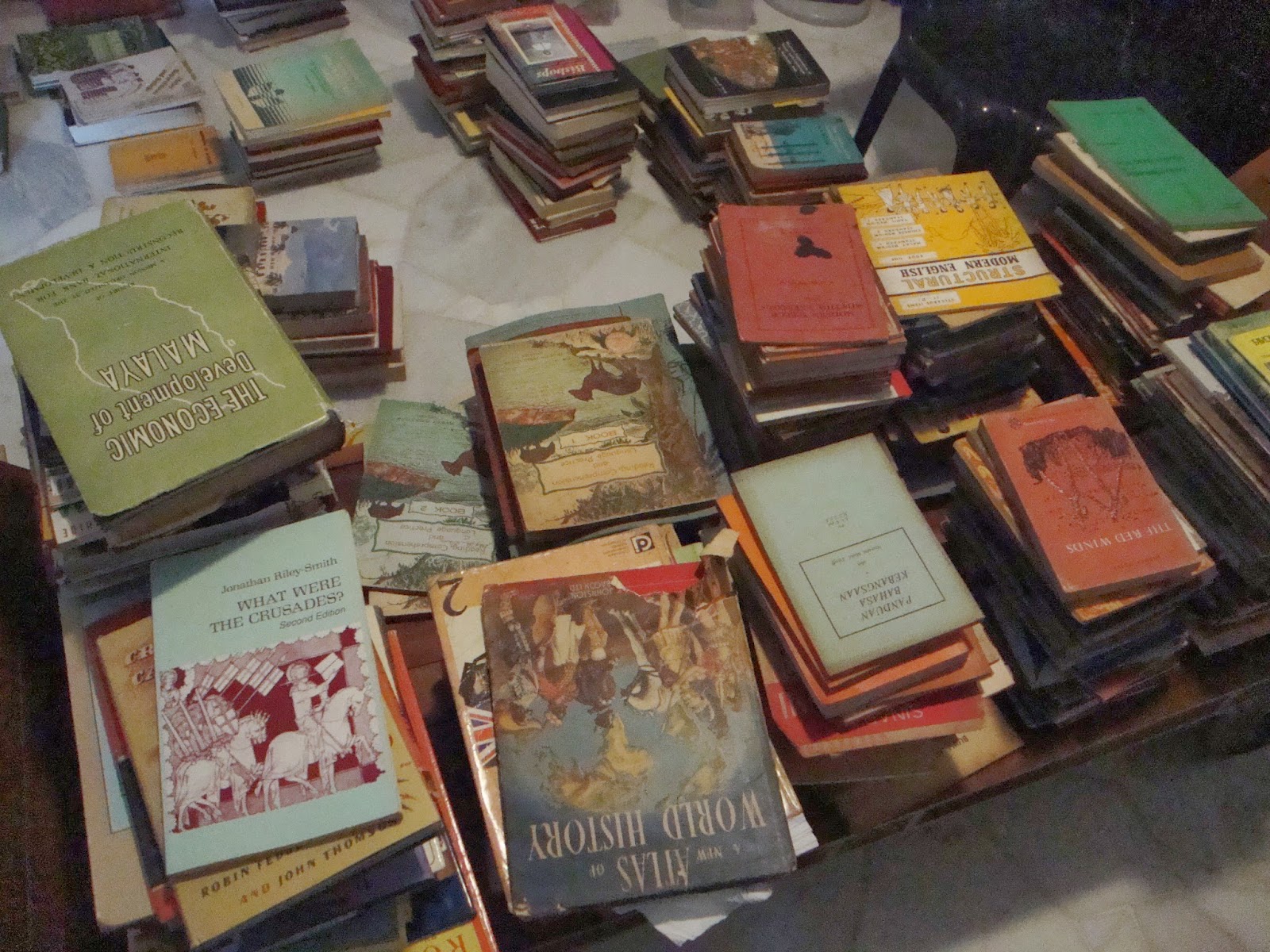 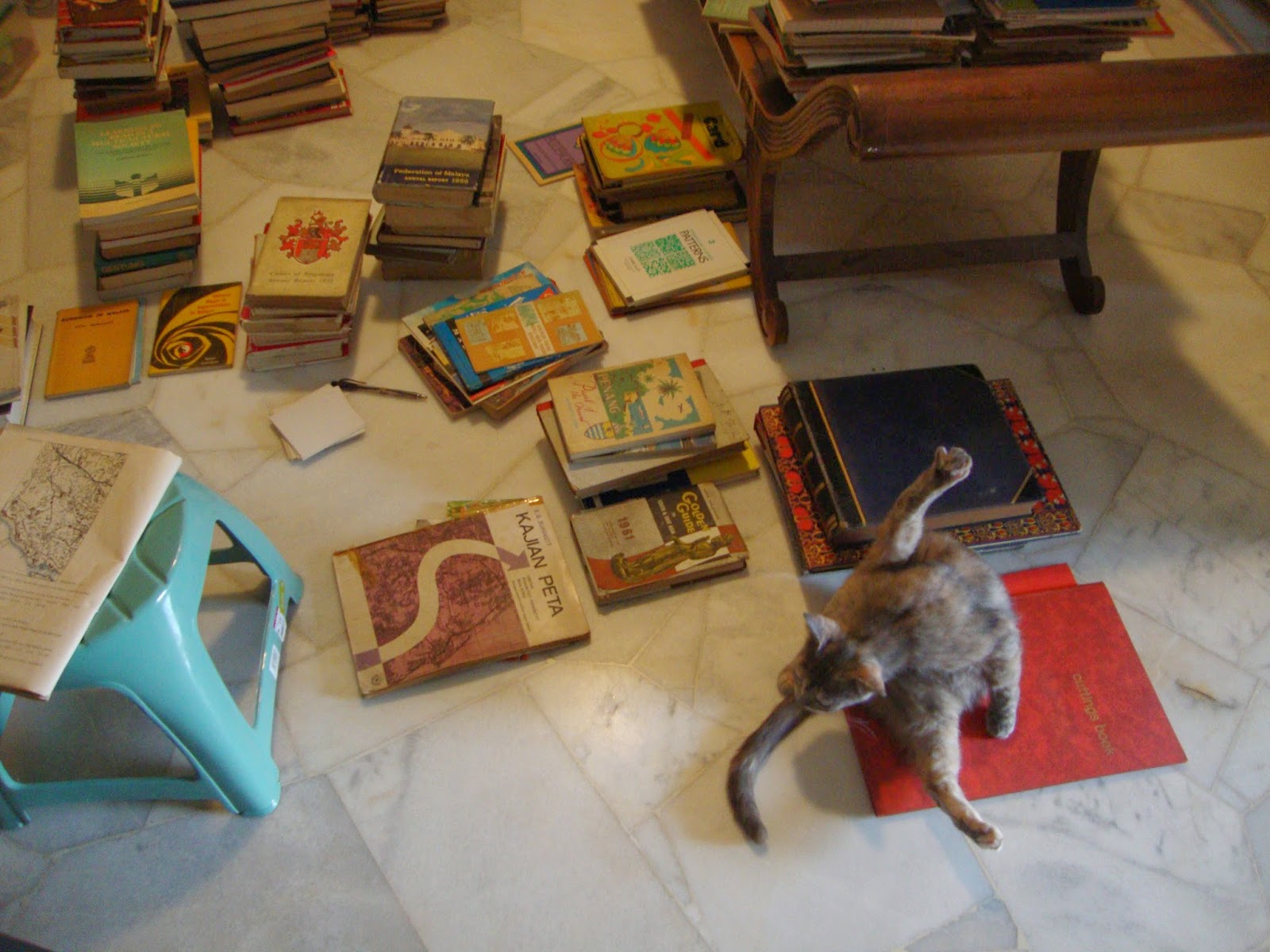 Between the two of us, we managed to empty some of  the bookworm's shelves. 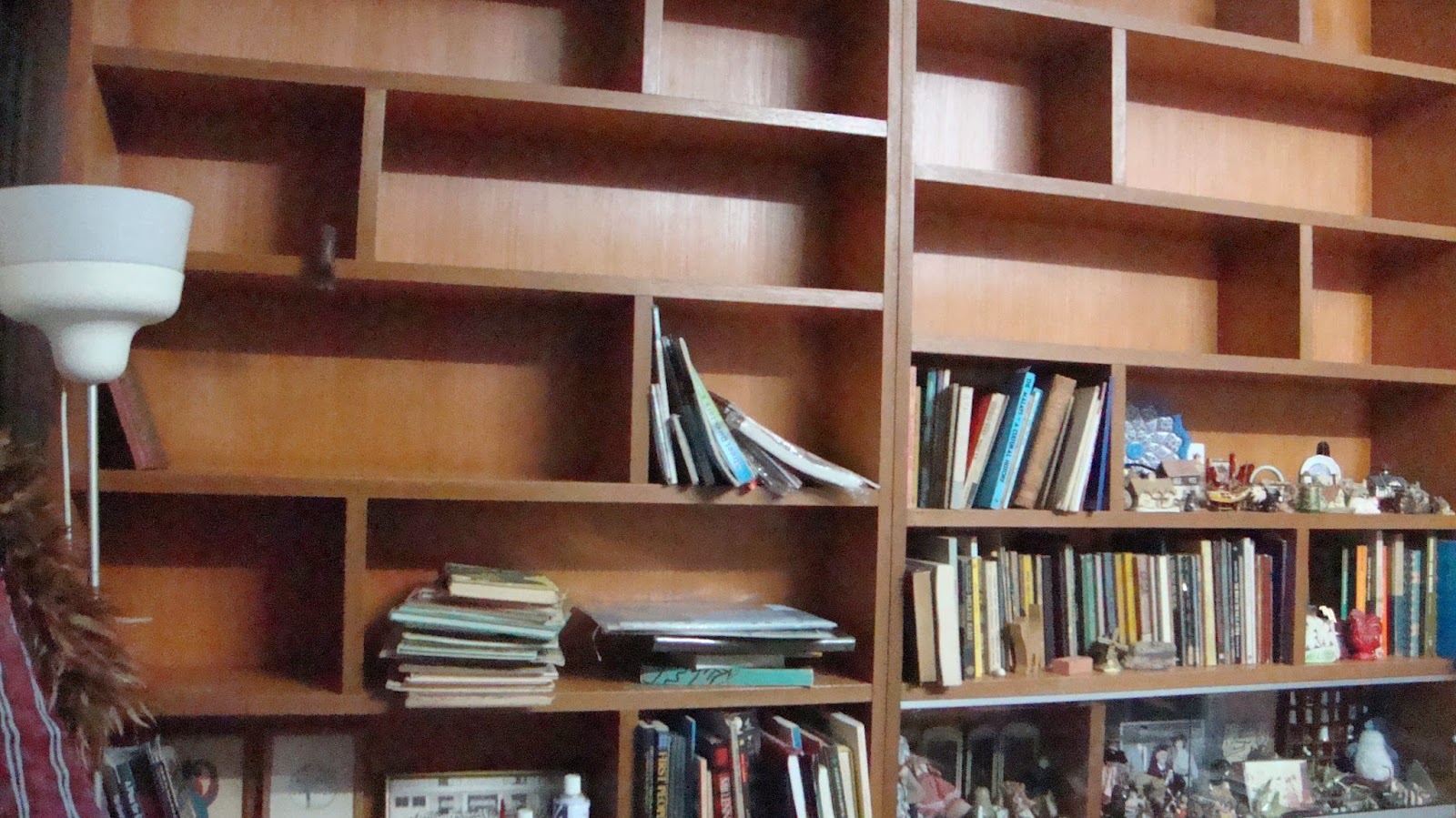 After nearly two weeks of slogging, this was the result. 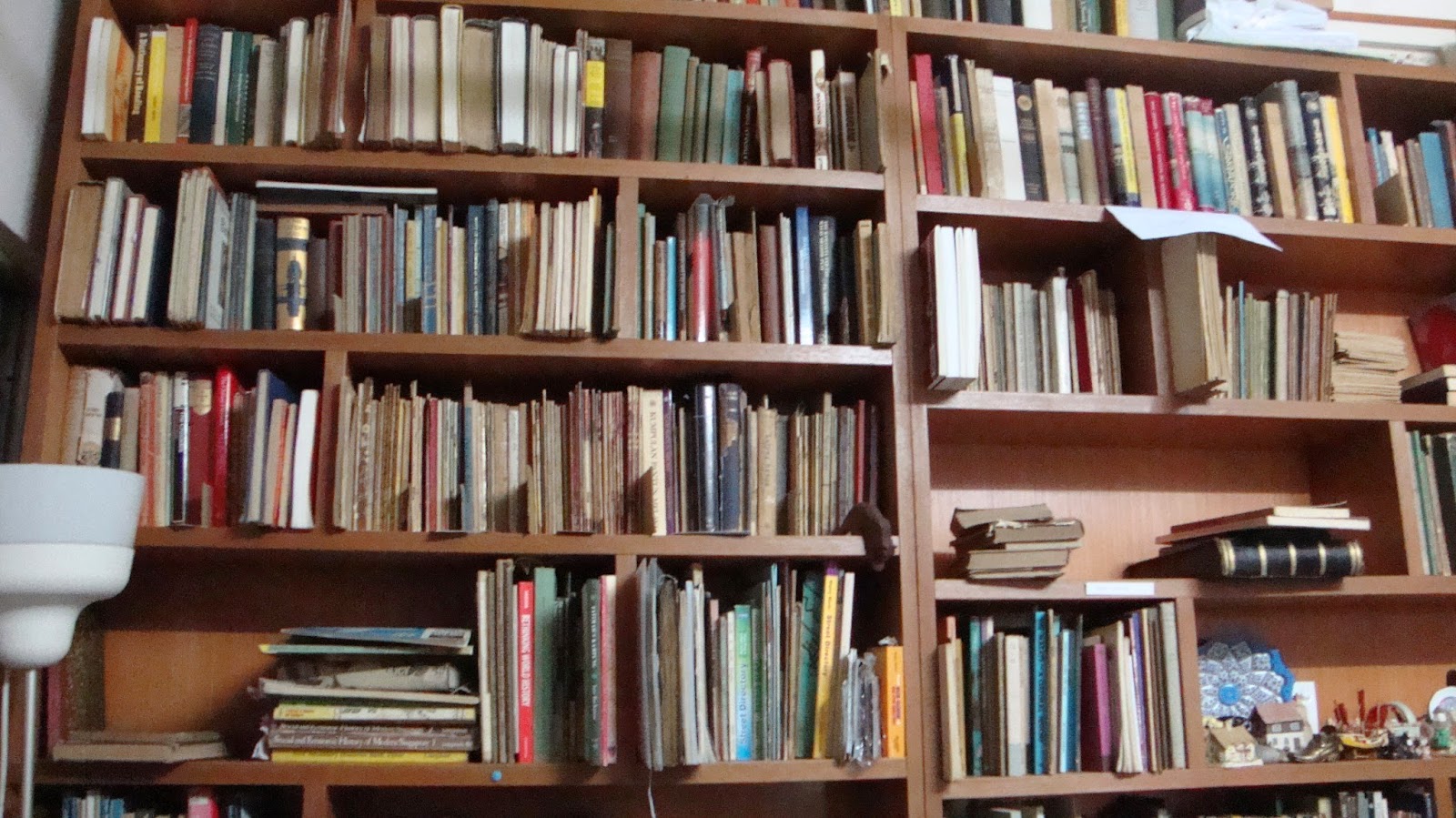 There's method in the madness seen above.  Top of the bill were the old geography, history, and language school textbooks - in both Malay and English - a fascinating insight into how we were taught  or brainwashed (?)  from the 1930s to the 1960s.  Next come the Annual Reports and Yearbooks.

However I am most pleased with this little collection.  It's not much to holler about  but I didn't realise I had more than one book on Hang Tuah. 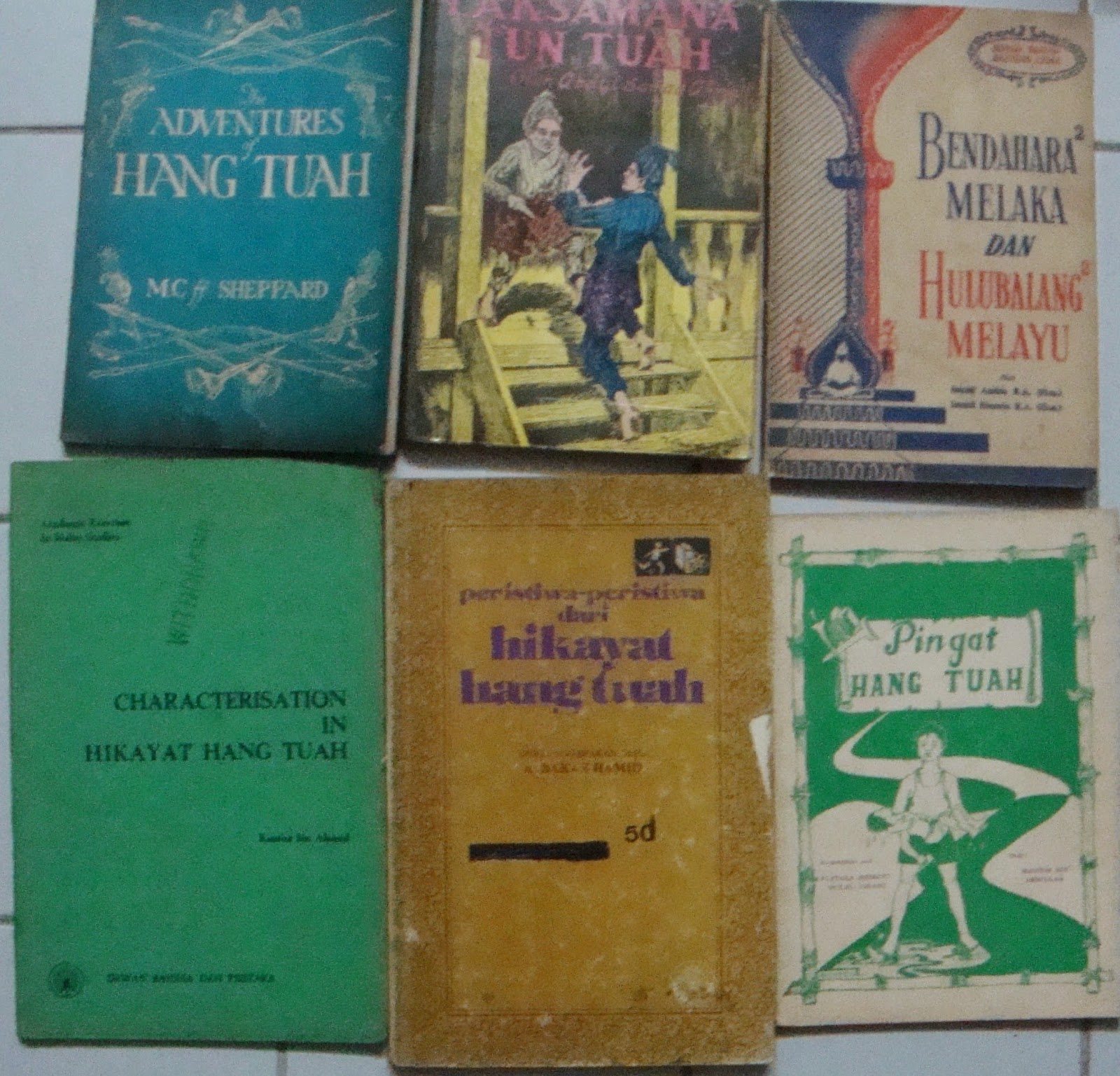 However I have to be be put against the wall for overlooking this particular book version of Hang Tuah. 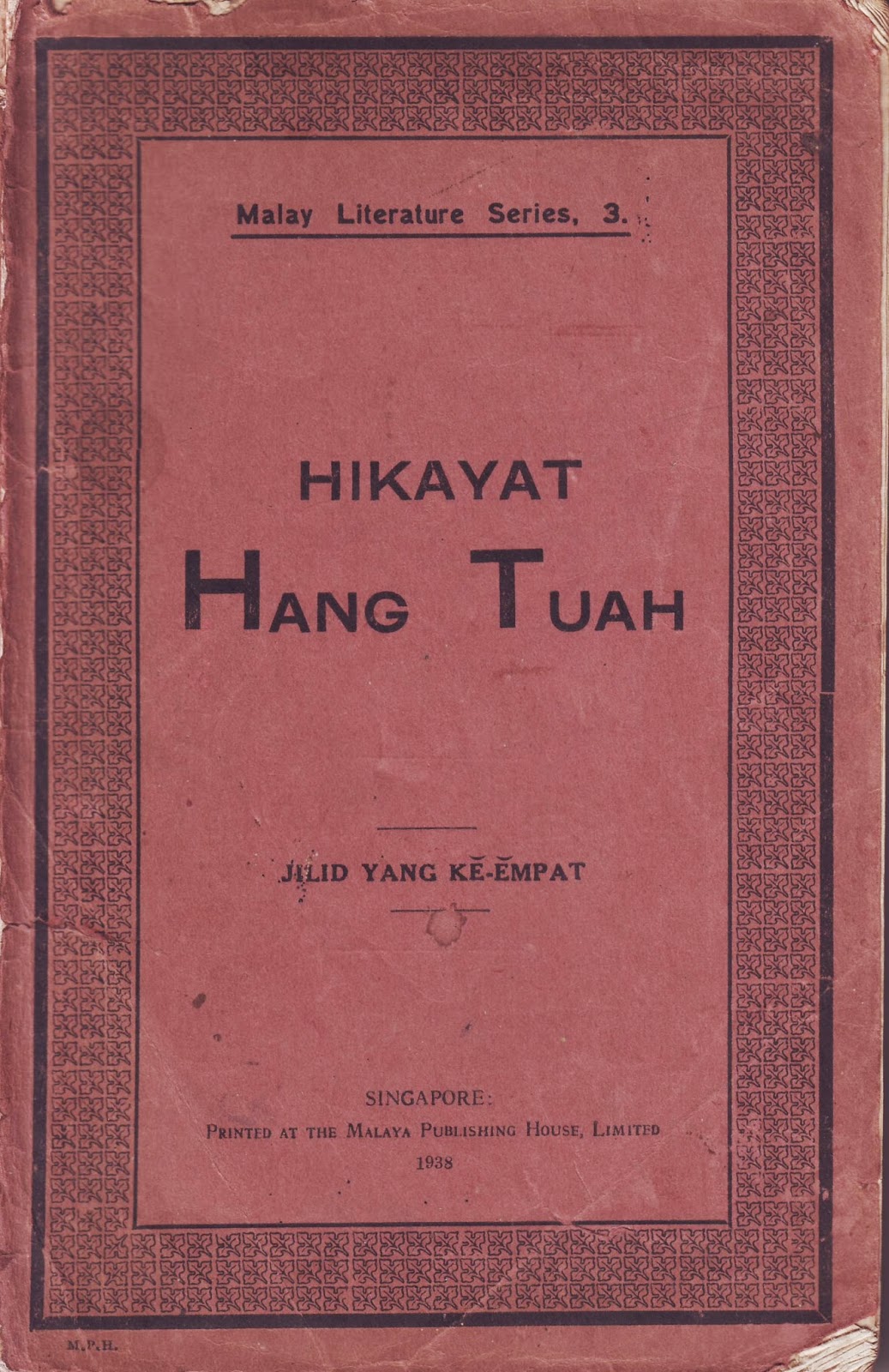 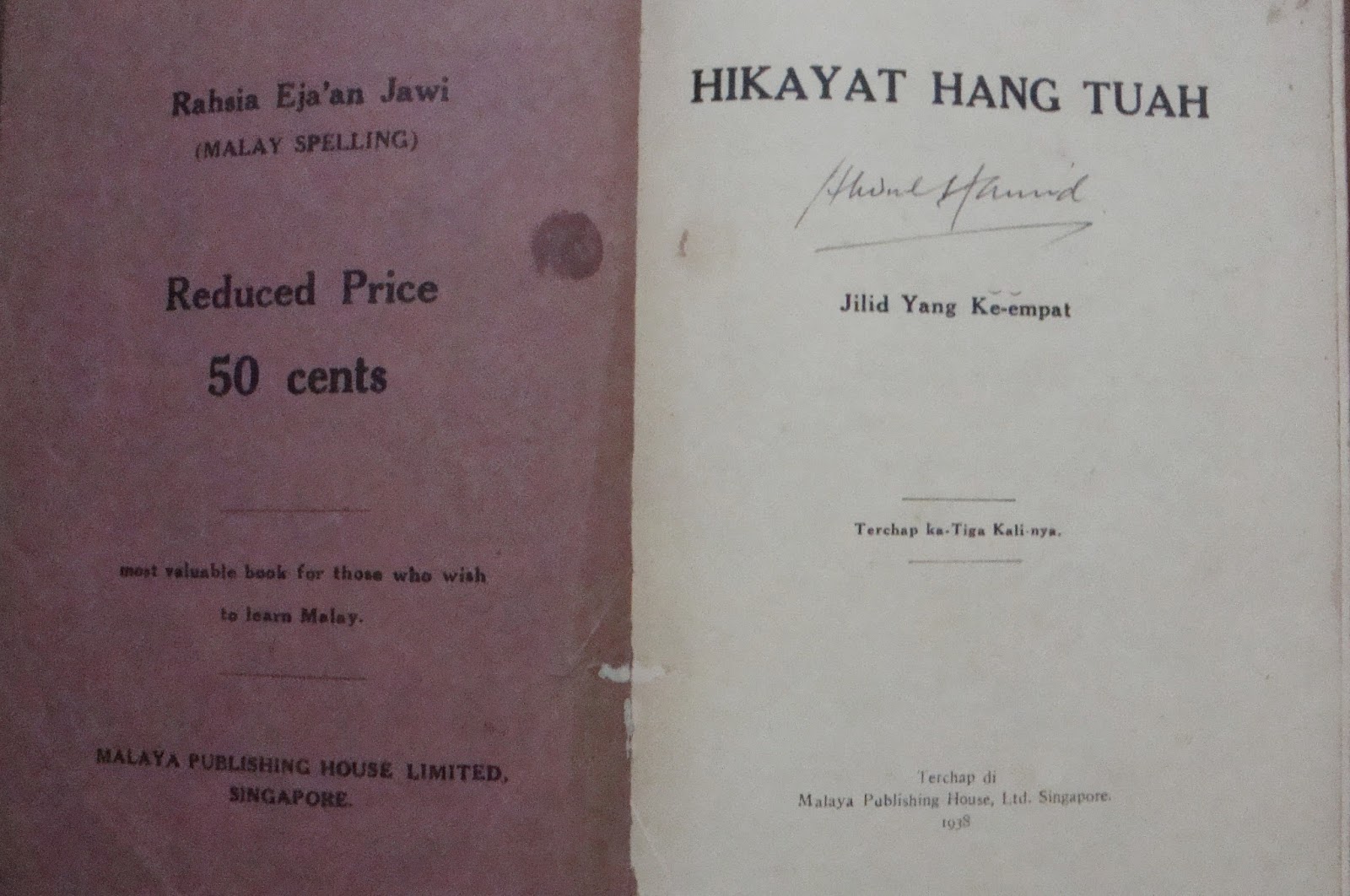 I have looked after this book ever since we left our kampung house in 1967 and I didn't know until just a few years back - until after I turned over the front cover - that this was Abah's book.   It was published by MPH in 1938 when he was still a bachelor of 28!  Shame on AnaksiHamid for her carelessness.

My best and quite precious books are these two JMBRAS publications - which I pinched from the spouse's bookshelf.  When he complained about this and other pilferings from his library, I claimed that this was part of the dowry he had to pay when he married me! 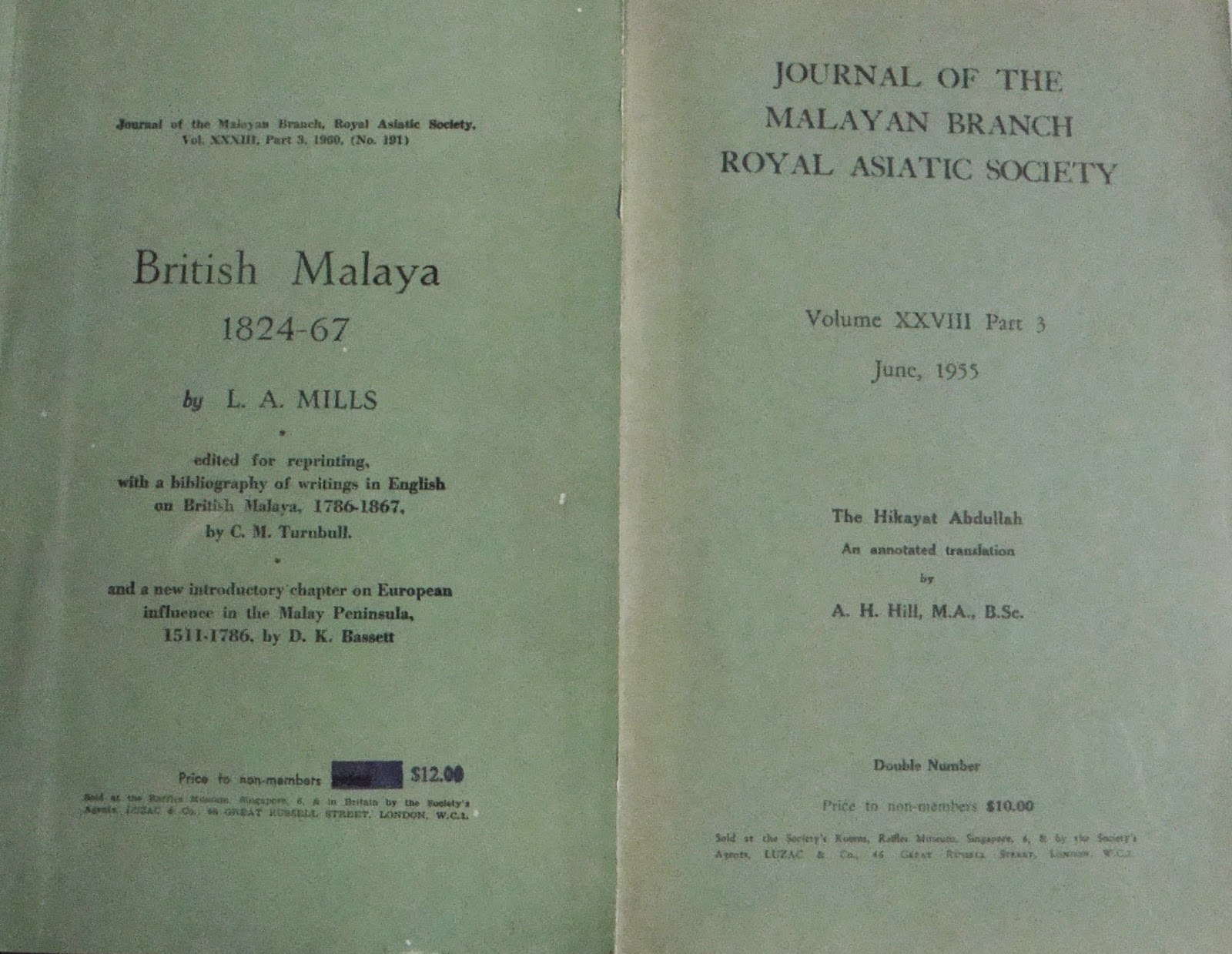 But a magpie like me, especially a geriatric one cannot resist looking out for books that bring back the flavour of happy childhood days.  Children today have their electronic toys to occupy them.  My generation used our fingers and thumbs to  leaf through books and to turn the pages - and of course we saved our parents a hefty electricity bill.  Comics and story books were our daily diet and even today,  I get no end of joy in touching and reading some remnants from days gone by. 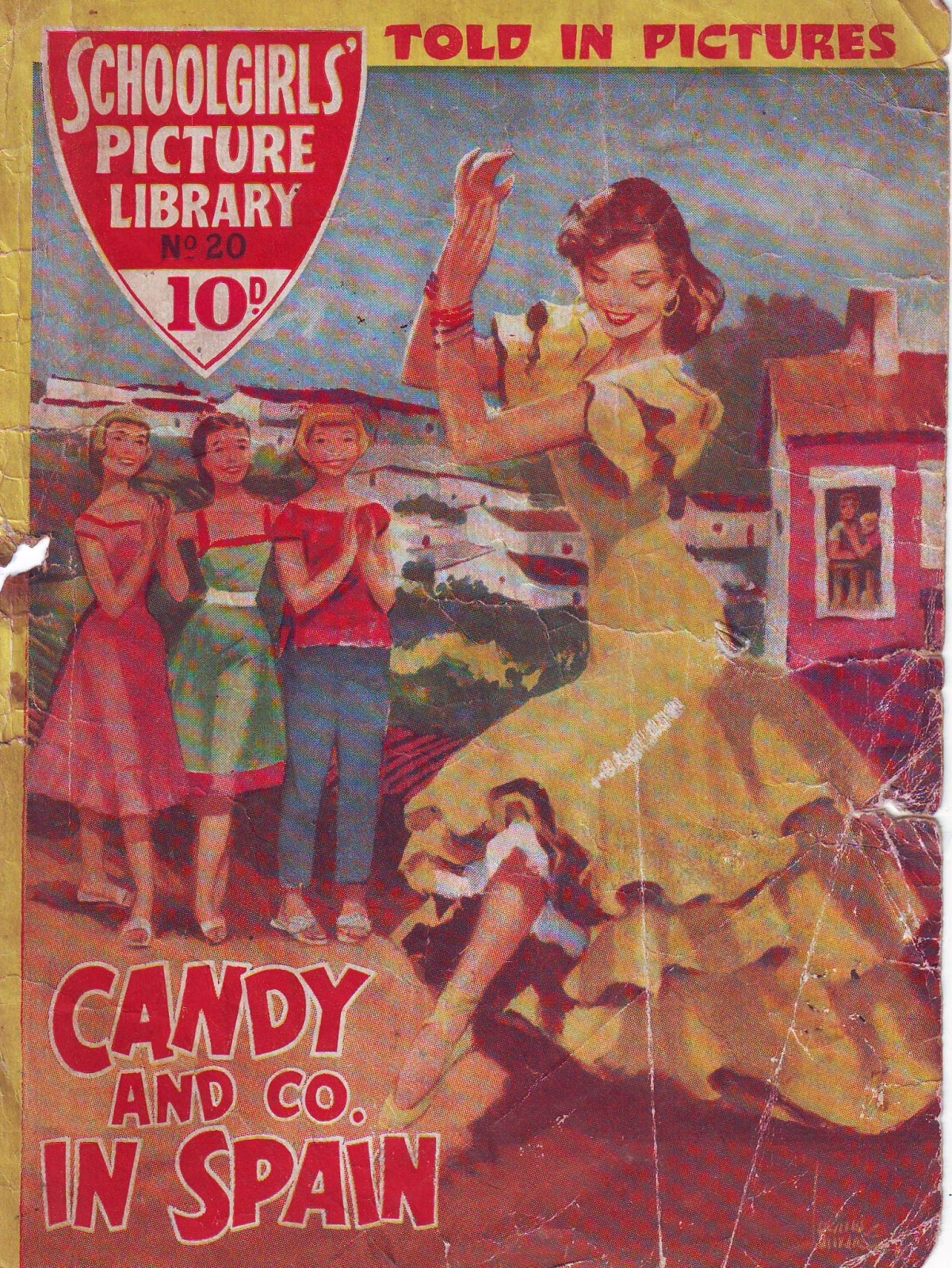 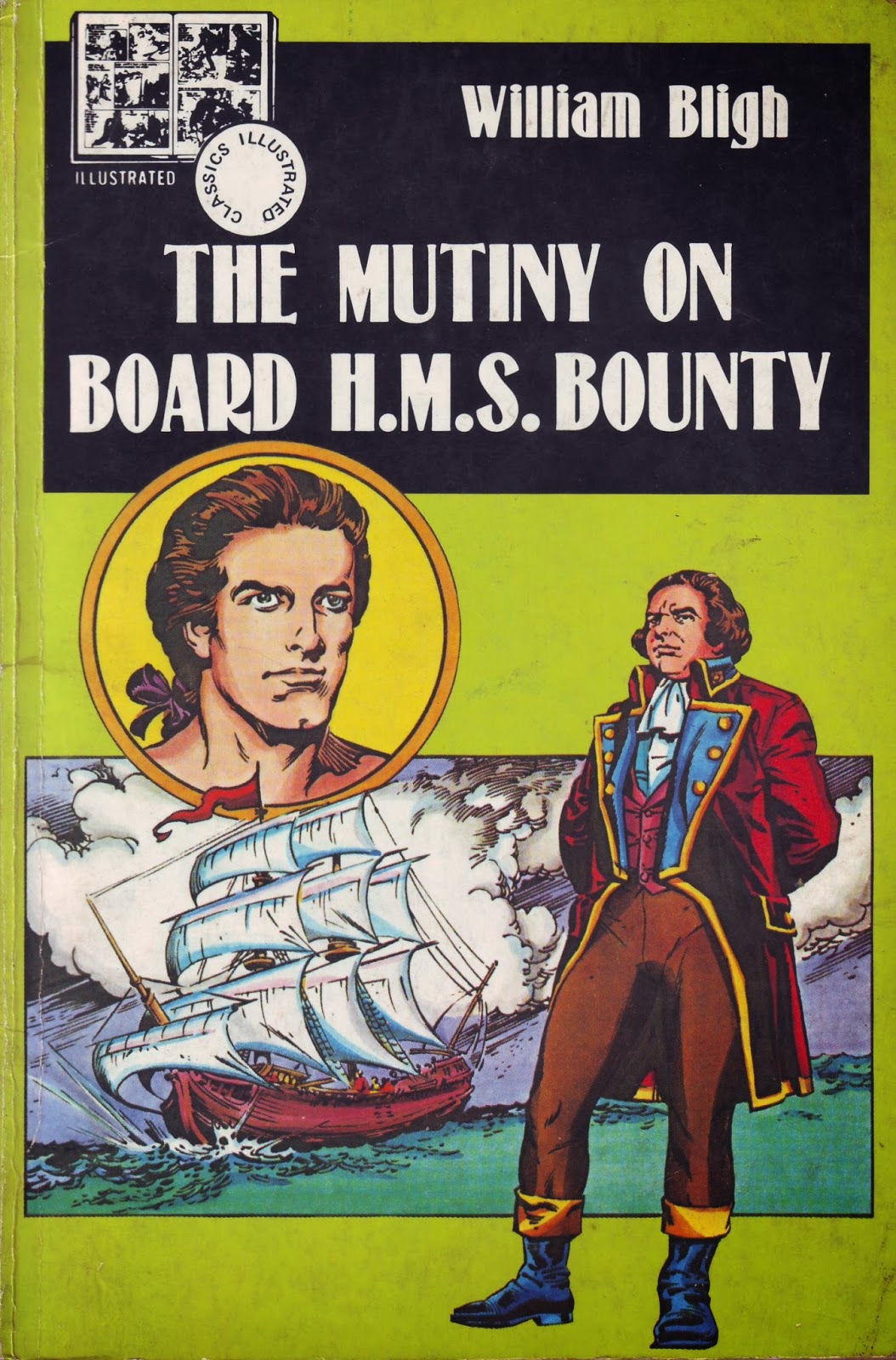 But my interests are not totally prehistoric.  I do enjoy some of the modern Children's Books, especially the pop-up books ..... 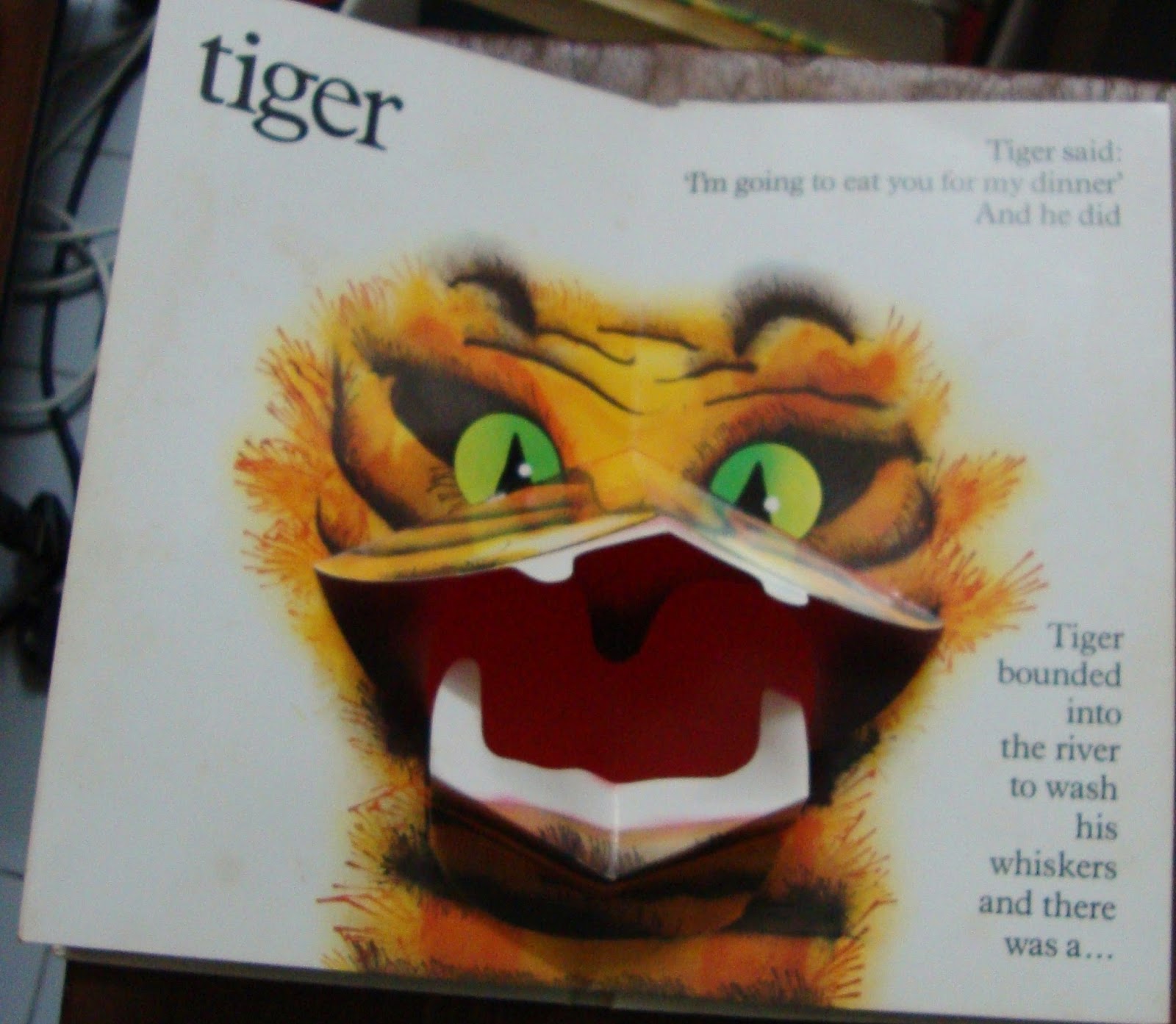 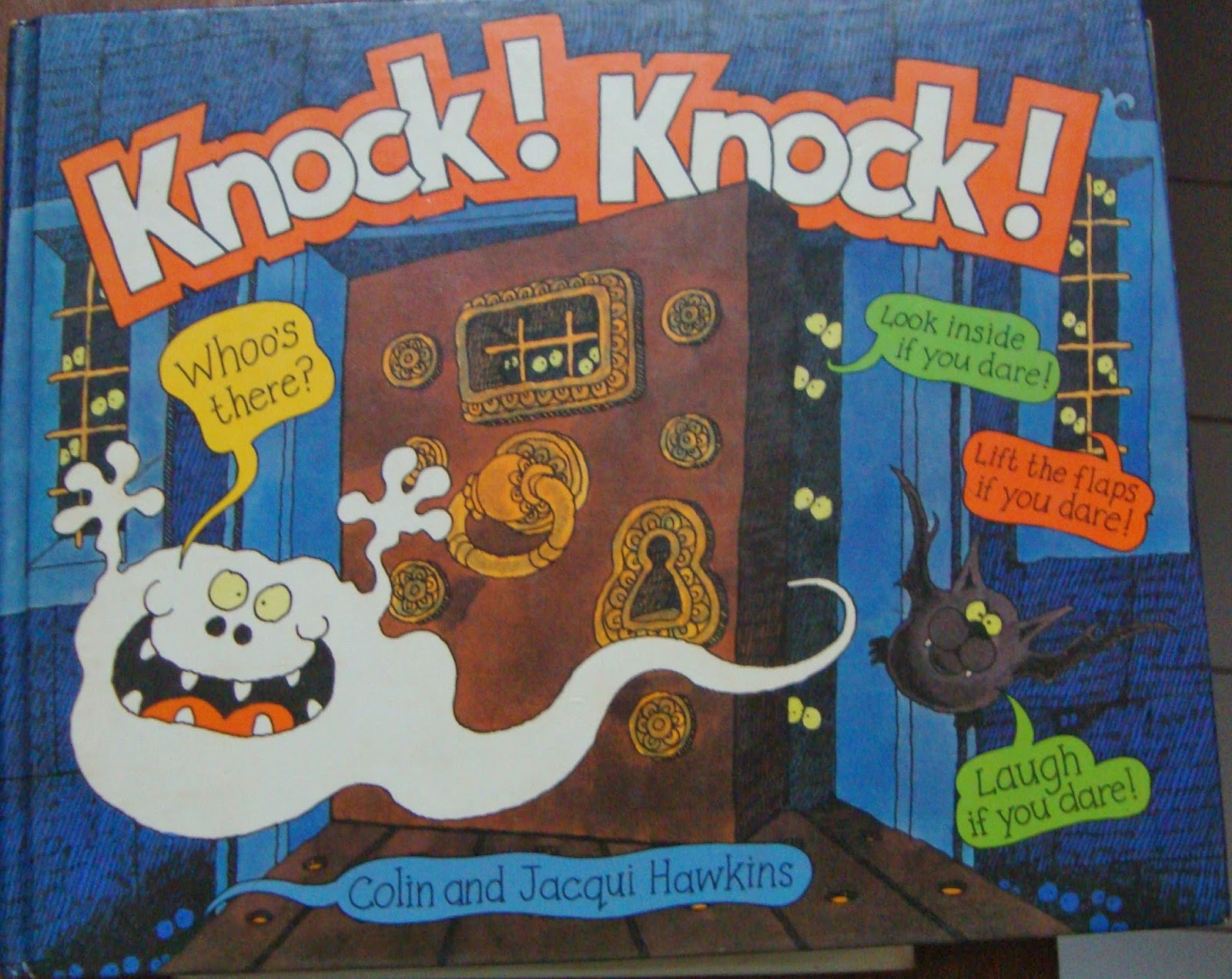 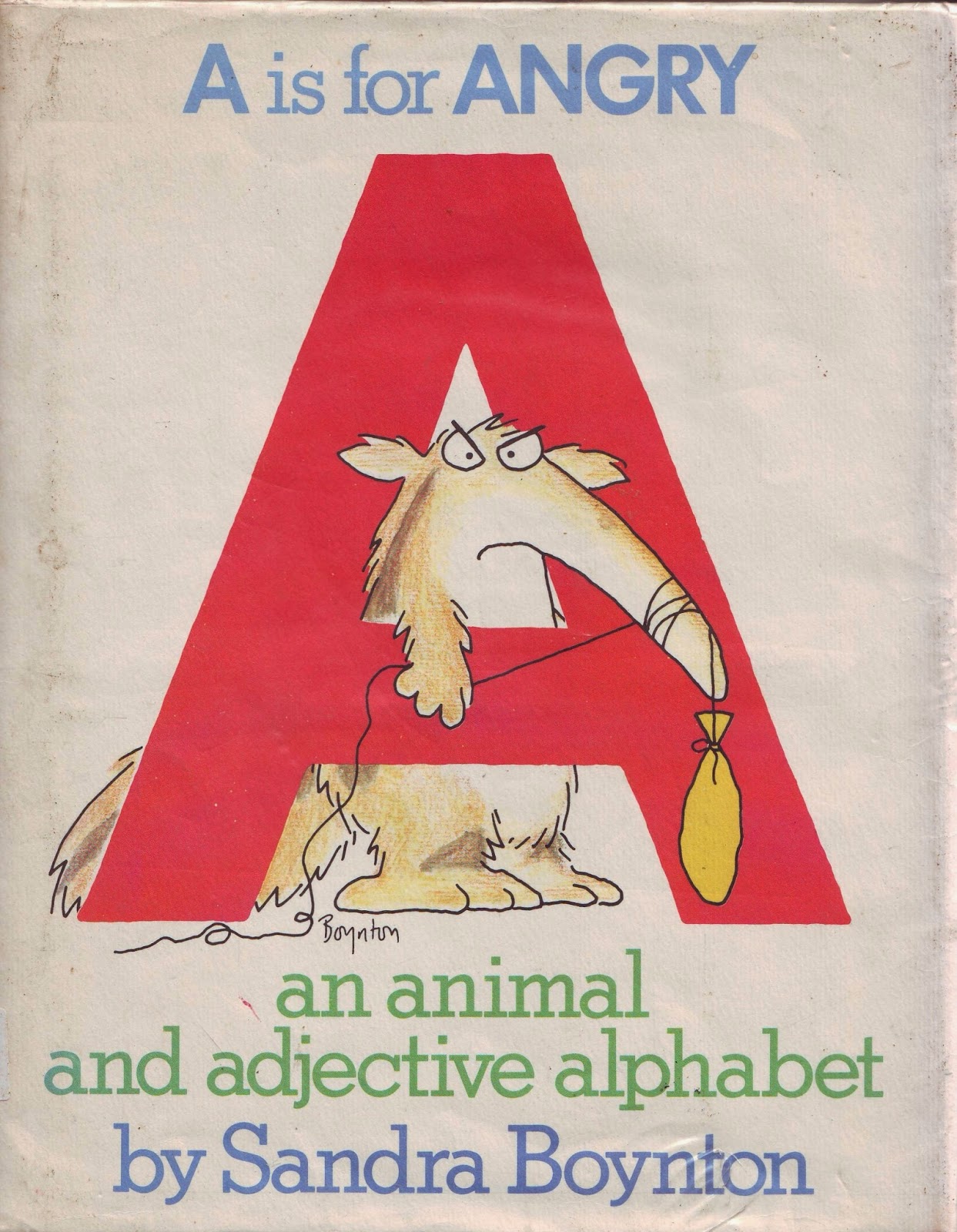 Right at the bottom of the book shelves I store the books that indicate the eclectic parts of me and the vinyls that keep my spirit in constant song. 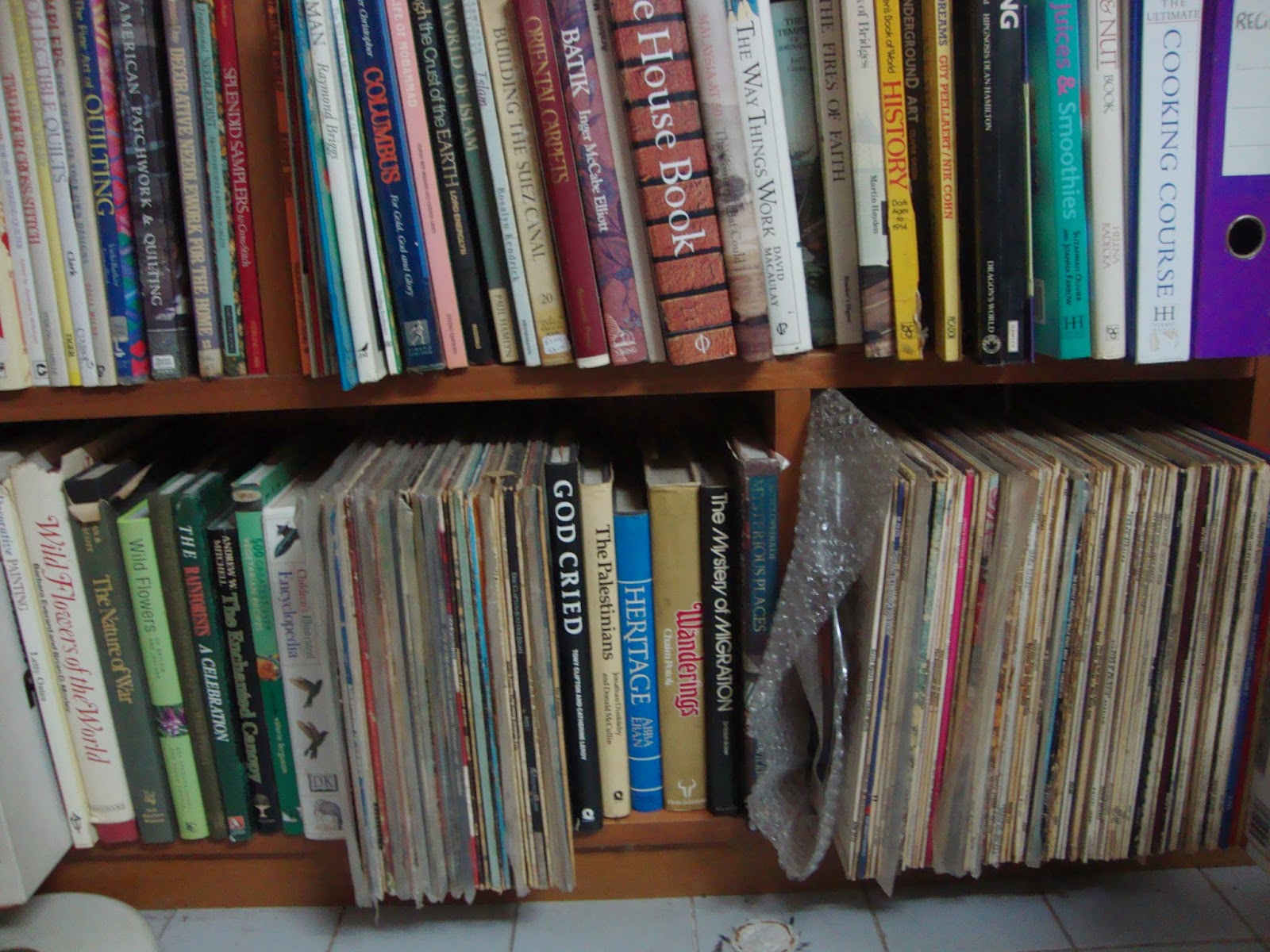 I  must stop here and end  in a sonnet.  In 1977 at Jurong Secondary School, I wrote this sonnet by Elizabeth Barrett Browning on the blackboard for my Sec. 4F English language students to read and analyze. Most language and literature teachers would think I was off my rocker to present them with this beautiful sonnet -  the kids from this industrial estate will just get bored and vexatious, I was told.
However these teenagers from Jurong and Boon Lay enjoyed it tremendously - the look in their eyes when they read it told me so.

Hence with this sonnet I express my love for Books.  Just change the word 'thee'  to 'my books'.  For this, I thank my father and my teachers. 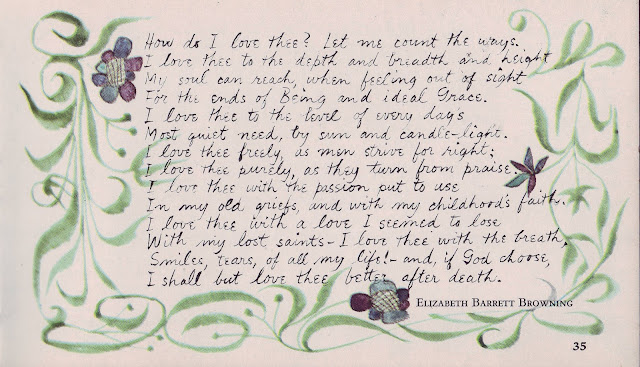 Living up to my indolent ancestors

Amongst other things, Frank Swettenham wrote  " His ( the Malay) main characteristic is an objection to continuous hard work ; the climate and the soil encourage him in the belief that life can be supported with little effort, and he accepts the facts".  ( Peoples of all Nations - Volume II : British Empire to Dahomey, edited by J.A. Hammerton, circa 1930 ).

It's wonderful to be back home in KL  despite the haze, the heat and the water rationing.  It's sunny and breezy, no chilblains, no cold bed and loads of betik and buah semangka.  But the brain  has been quite reluctant to get going and so I resorted to my usual escapade - rustling my cache of old books.  I thought it would be good  fun to  display some of  these illustrations from the 1930s about my ancestors'    "objection to work".


And here's another beautiful palm tree - but one not so useful to "more civilized peoples" :


These two palm trees bring me to this poem  about the Coconut tree and the Betel/Areca Nut tree from the "MPH Malayan Primer", 1932. 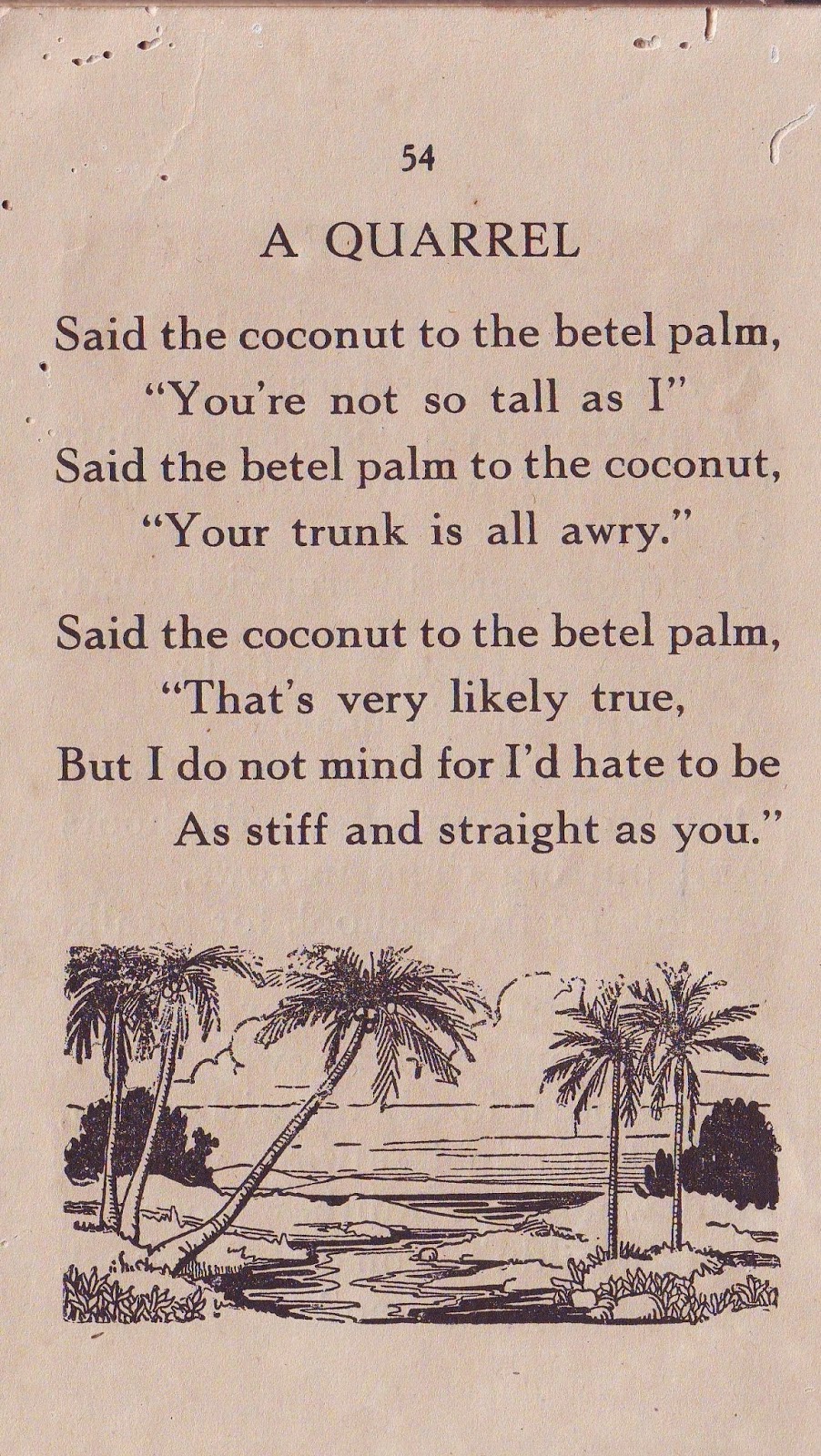 Although that poem was written for children, its message would do well for adults as well,  for politicians, academics, the clergy and all purveyors of  human rights.  For certain that will prevent hypocrisy and self-righteousness.

As for that beautiful material for our traditional furniture - the rattan :


My ancestors also got to work on cooking this - a sweet delight for all Malaysians and Singaporeans.

In India it's called jaggery  while the Malays name it as gula melaka or gula kabong.  It has a better flavour than processed white sugar and it's healthier too.   Wow, my ancestors were quite clever eh?

Malays were not involved in the "heavy duty" and highly remunerative economic activities like rubber plantations and tin mines and of course commerce.  But  they did participate in other occupations - the ones that were not as profitable.

For the benefit of modern  Malays who are more familiar with French fries and pizza and bread rolls, tapioca flour is used  for cakes and cookies,  as a thickening agent for food products and as a binder for pharmaceutical tablets.  It is also gluten-free.  For our ancestors and for some of us today, manioc or tapioca or ubi kayu gives us local delicacies like tapai and krepek.  For me, nothing beats boiled ubi kayu with sambal blacan  or gula melaka syrup for a mid-morning or mid-afternoon snack!!

Here's a little example of  Malays putting their toes into a bit of commerce.


If all the above indicate indolence, then commentators like Swettenham are as good as the monkey's uncle!


But this one image takes the cake.  Rice farming -  the Malays' traditional occupation  till today : which is also the most exhausting and backbreaking  livelihood -  was described as an indication of Malay sluggishness.

That's rich!   Isn't the global economy today creaking and collapsing because of the credit crunch and the banking crisis -  too much borrowing, not enough conservation and savings, and too much greed?  Why toil when you can make loadsofmoney by speculating and  gambling with other people's money?  Better still, unlike those  'indolent Malays', today's  "more industrious and more civilized people" can expect the government and the taxpayers to bail them out.

This is my favourite picture of my ancestors.


I particularly love the caption :

"The more insignificant of the trading craft are employed for this purpose, and on market days a perfect fleet of small vessels may be seen plying up the river bound for some convenient centre where they may discharge their ripe cargoes.  The craft used are chiefly dugouts, or light fishing boats - things so small and crazy that only an amphibious creature like the Malay would trust himself in them."

If our ancestors - like one of those entrepreneurs in the above picture - should turn up today and look at the condition of their descendants, they would probably shake their heads in despair.  They will see so much gain and achievement, but the semangat Melayu  has been ground into the dust.  An amphibious creature can survive on both water and land - that is why we call our homeland  Tanah Air.  A people who originate from such disparate environment should be able to straddle (with humility and dignity) the modern and traditional, the spiritual and material without shooting themselves in the foot and stabbing each other in the back.

A lovely song from another true blue anak Malaysia.