The last two years have been a roller coaster - for AsH and for her native country.     AsH has been like a drowning rabbit desperately pushing her head above water to get a breath of fresh air.  As for Malaysia the populace are drowning in a cesspool of dirty, opportunistic politics.

This year, to bring some cheer and hope to a despairing AsH and to her small garden forest, this septuagenarian Malay woman decided to fly (with technical advice from the English Scotsman spouse) Jalur Gemilang above our fence. 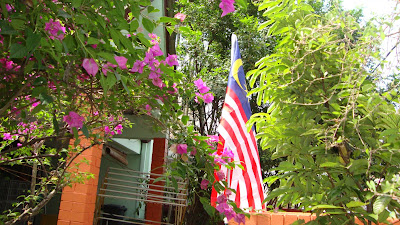 I'm well aware that it's so passe to demonstrate love for one's homeland.  After all, those in the know, those in the front line of political fashion, have gone global and now see themselves as citizens of the world - a world without borders where we are all equal, brothers and sisters of the same blood under different skins. Ho hum!  That sounds sweet and convenient for the global luvvies  who can cross borders without obstacles and sanctions - just a valid passport from a 'valid' country and wallets packed with credit cards and plastic financial statements.  Very unlike the status of Syrians, Libyans, Iraqis, Afghanis, North Africans, Palestinians, Mexicans and the poor of the world who suffer to get the crumbs of the global cake.

I'm aware that I could be accused of being one of the privileged but I am no globalised luvvie.
Teras terunjam, gubal melayang.  Ash's teras is solid and her gubal tidak akan melayang.


(Teras is the harder portion of a good timber tree, gubal is the sapwood, between the core and bark of the tree)

Today I wish to publicise  one of my favourite pictures of the native Malays of the Semenanjung, the so-called "indolent, unenterprising Malays". 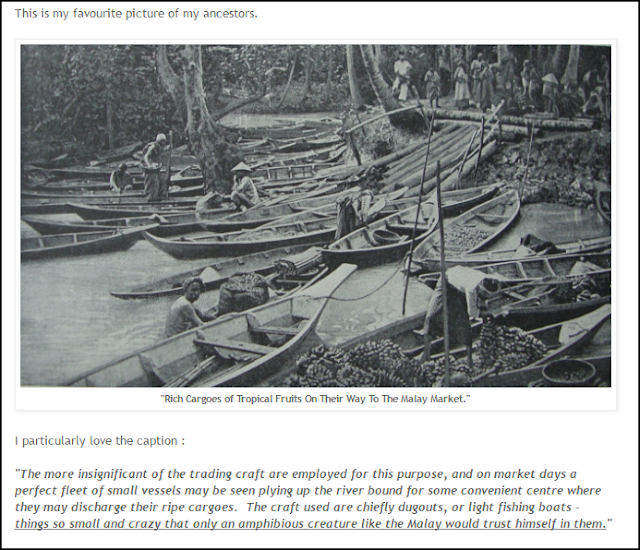 But that scrutiny of today's dysfunctional Malays has been ploughed and furrowed enough by me - an amphibious creature swaying in a "small and crazy" perahu.

Hence to remind me of my political DNA, I'm inserting these images for Merdeka 2016 just as a reminder - Bagai sirih pulang ke gagang. 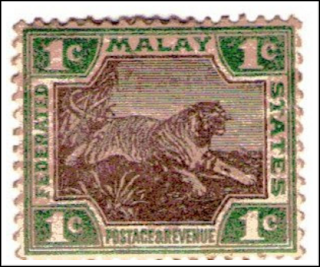 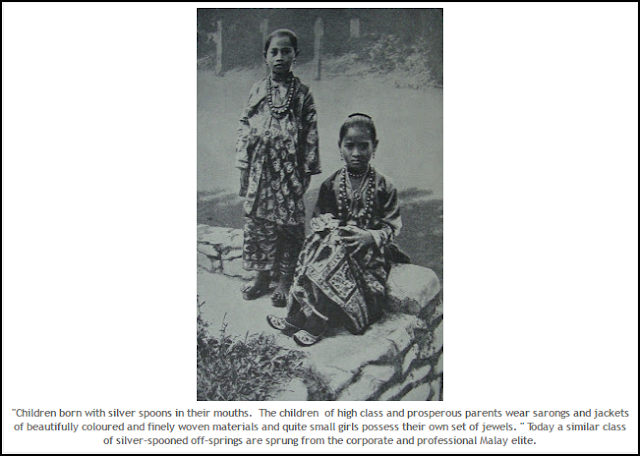 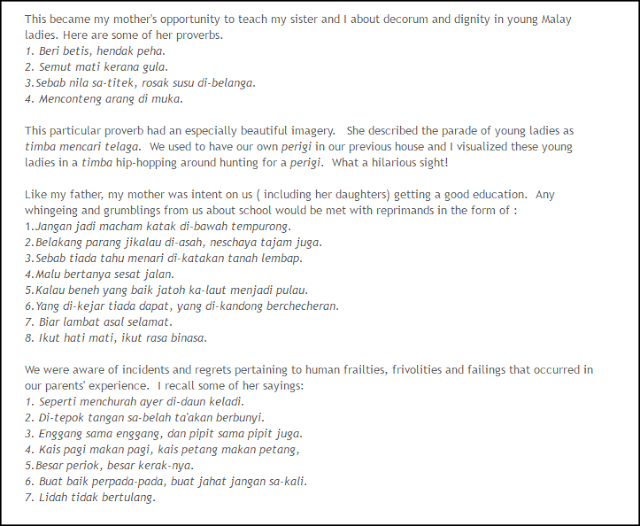 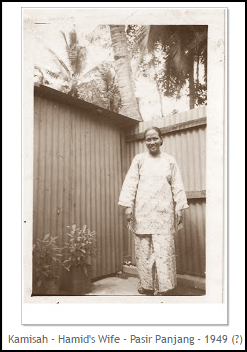 Life on a roller coaster makes one ponder the imponderables: of the "ifs" and "what ifs" of life.

What if I was a third or fourth generation Malay British National?

1. If a Malay from Malaysia and a Malay British citizen were competing for a medal in the Olympics or any international sports meet, I would not snort a racist disdain by saying it does not matter who's the winner as they are both Malays.

2.  I would not have the heart or the contemptuous cheek to mock my adopting country's traditional celebration by suggesting a cat or dog roast for Christmas dinner.

3. If , and it's a big "IF" - this Malay British National gets to be a member of the Bar Council I would not be so cocksure and presumptuous about peeling away bits and pieces of British law and its practices - in order to hobble the majority - even if my fellow British Malays make up the bulk of the Council. That's like living in cloud cuckoo land!

If I were a native Brit -

1.  I would not want to disown or play second fiddle to my Scottish, English, Welsh, Cornish, Irish identity for the singular description of being just British First.   Like these people do:

2.  I would not, as a practising Christian , declare " I am not British or Scottish or English or Welsh : I am  Christian."  ( I'm comparing this to to an encounter I had with a Malaysian academic who preferred to be identified as a Muslim and not a Malay. See " A little jaunt into escapism" - 9 August 2015)

3.  As I am British and a British Christian, it would never cross my mind to be prancing about in the   attire of the Land of Jesus Christ.  My speech and writing would not be peppered with Aramaic or Hebrew.   If my language has a word for it, I would use it.


If, as of the early 19th Century, the Semenanjung was ridden with poverty and civil wars, and the Malays migrated by the boat load to China, and I thus become a second or third or fourth generation Malay citizen of China :

1.  My Mandarin would be flawless and my ability to speak Malay would have virtually disappeared - just like the Malays in Colombo and Cape Town.  No way would Malays dare to ask for Malay language schools.  They would most likely be reprimanded with Yaushiu (bloody cheek!)  or Lu siau lang ah? (you people must be mad!) or Malaikwai tng chhu  (Malay devil, go home!)

(Sorry, AsH is only familiar with Singapore Hokkien!)

2.  We would respect the government.     Which would mean, of course, (as of 1949) that my fathers and grandfathers (some rich but mainly poor) would obediently brandish their Little Red Books to demonstrate their ardent loyalty to the People's Republic of China.  Also the opportunity to practise Islam would be circumscribed by the laws of the Republic as in Xinjiang today.

Next, what if my grandfathers and great-grandfathers were brought over to India from the Peninsula as coolies and convict coolies :

1,   I would be speaking  Hindi/Punjabi/Gujarati/Tamil  "macam air".  The 'baju kurung' and 'baju kebaya' will be extinct.  ( But what the heck?  These two forms of Malay attire are also suffering the same fate in present day Malaysia!)  There will be no sambal blacan, ikan masak asam pedas tempoyak  in our diet.

3. Most certainly Malay lawyers would not even smell the lush furnishing in the equivalent Indian Bar Council or bestow their opinions on the rest of India about the disgrace of the caste system, of bridging the obscene gap between the rich and the poor and the welfare of the indigenous Adivasis.   As for ownership of Airlines and Media Businesses - Podah.


What if my ancestors had migrated to Saudi Arabia or Egypt or Yemen, would they be as highly regarded and accepted even as high as the aristocracy and Royal circles as the Arabs  are in the Peninsula?

Five years ago, my former Malay Muslim male student from Singapore related an interesting business encounter in a Saudi Arabian Company.  He was blatantly ignored while Caucasians were given the gold star treatment.  When they finally deigned to talk to him, he asked them a simple question at the end of the conversation.  "Is your Kiblat in Paris or London or New York?"

Your Miss Hamid is so proud of you, kiddo!!


And at the end of my wonderings and wanderings on the rollercoaster:

On this 59th year of  Merdeka I hope for a happy, peaceful and united nation.  I avoid the word 'wealthy' because there is this tendency in human nature -

59 years ago, I watched my father's tears as he listened to the commentary on the lowering of the British flag and the raising of the Malayan flag.    He cried for two reasons.      At last his country was free.   But his tears were also because of his fear for the future - knowing the toxic and unsettling legacy of the British.

I have no tears, only disgust and anger at the shenanigans and duplicity of the people and leaders of my Abah's  Tanah Air,  my grandfather's Tanah Pusaka and my nenek-moyang's Nusantara.

So, will all you people, inside and outside of Malaysia please stop playing silly Sreggub with my little patch of God's earth??