(Musings from the Spouse, illustrated by AsH)

I am an old-fashioned lefty liberal.  At 76 years of age, I have clung all my adult life to a rag-bag of good intentions and easy theories, acquired mostly in the comfy sixties, about internationalism, socialism, multi-culturalism, and humanism.  Some of these ideas have been discarded by most of my world; others have been resurrected - usually in a modern, and barely recognizable, shape.

I have stuck to my guns.  I grew up in Africa (we had to leave South Africa because my father criticised apartheid); I married a Malay girl from Singapore/Malaysia, and my son is half-Chinese; I have good friends from a dozen cultures, four different religions, and four different races; and I enjoy music and food  from every continent.  I marched against apartheid in New Zealand, wrote against the Vietnam War in Singapore, and in London I marched against war in Palestine, Gaza, Bosnia and Iraq.

But nothing, absolutely nothing, prepared me for the Romanians.

Some said they were Roma; some said they were Muslims from Bosnia - because the women wore long skirts and scarves.    We noticed them begging in the streets - one woman, I remember, came up to me cradling a plastic doll wrapped in a shawl.  Then about five years ago, they started moving into our street.    Soon, there were five families along our stretch of road.  Perhaps these too were Roma, I thought: they were generally short and darker-skinned than most, and the women were all dressed alike - long skirts, scarves around their hair.

It was then the trouble started.  Children would come up to us demanding money.  The young woman next door came up to me asking for cigarettes.  At Halloween, we had Romanian children ringing our doorbell for "trick or treat" - the first time this had happened to us in the 40 years we'd lived in Leicester.  The doorbell would  be rung at all hours of the night - until we disconnected it - and footballs kept thumping against our front windows.  I was screamed at by one young boy when I asked him to stop kicking the ball at our house, and my wife had racist abuse hurled at her by two others.  Every evening, people young and old would gather outside our front window, and sit on our front steps, eating sunflower seeds and showering the pavement with the shucks.  And they never seemed to go to bed.

So the street manifestly suffered.  Within a couple of years, the corner house opposite us had all its ground floor windows boarded up.  Fly-tipping became a permanent feature: ransacked  (and pinched)  charity-shop bags of clothes, children's toys, old home appliances and packaging of new home appliances, bottles and drink cans, heaps of broken furniture, mountains of old carpet, paint tins, car parts, split bags of old food, and much else besides.  Further up the road, abandoned cars started appearing.

And this was all just in front of the house.  Through the living room walls we had a never-ending chorus of shouting people, thumping feet, and slamming doors - I pitied the landlord when he discovered the damage.  Some (though not all) Sundays we had religious services, complete with a speaker system, going for an hour or two.  When Pope Francis was inaugurated, a three-hour long service went on into the early morning.  Such occasional piety I don't mind - but when the pattern of behaviour is frequent and unrelenting ... then I do mind.

But what about the back of the house?  Presumably to extend the living space, our neighbours built a lean-to kitchen in the back yard, covering the entire yard with bitumen sheeting and plastic - and from this, on many a weekend, would come a clatter of pots and pans well into the early morning.  Perhaps, because of this al fresco kitchen, rats started to appear in our backyard.

But the real problem at the back was that our neighbours no longer had a shed for their clutter.  Gradually, our private access path took on the role.  Soon, we were unable to open our back gate to put out our wheelie bin.  We asked our neighbours to remove their rubbish: initially, they demanded we put out our bin through the entry of our other neighbour - which would have involved lifting it over the party wall; they eventually agreed to clear things, and we had access for two months.  Then the rubbish started to reappear.  We asked again.  The same thing happened once more.  We gave up.


That was almost four years ago.


But our problems at the rear of the house were not just about access.  From our neighbour's upstairs window we have had a shower of lighted cigarette butts, drink containers, paper tissues and Pampers thrown in our direction.  Over the years, hundreds of cigarette butts have landed in our yard - we only need a long hot summer and some dead leaves against our garden shed ......


And it's not only our immediate neighbour.  We have had three letters from the railway company demanding settlement of unpaid fares.  From the name, we know the Romanian culprit lives in number 57 - he gave our address to put the authorities off his scent.


Lest I be accused of picking on Romanians, let me say two things very clearly.  Firstly, I am reporting my experience of every single Romanian I have ever met.  So perhaps there are nice Romanians, and one day I will meet them.  Secondly, no, it's not just Romanians.  For some years, our next door neighbours were Polish.  They were noisy and arrogant.  One wanted to buy our car, and soon after we said it was not for sale all four tyres were slashed.  On another occasion, I watched the same neighbour bring an old TV set to the front of our house and throw it bodily onto our front step.  We were terrified.  There was a time, too, when a walk down Evington Road risked bumping into drunk and thuggish East Europeans who certainly seemed to be Polish: I was accosted four times by such people, all demanding money, in the space of a year.

So maybe it's just Eastern Europe.  And maybe Brexit is, for many people like me, an understandable gut reaction to foreign tyrants on our streets and in our midst.

The week before last, a Mercedes SUV tore round a corner onto our road and landed on top of a neighbour's parked car.   The time was 8.50 on a Sunday (19 May) morning; the driver was the teenage son of one of our Romanian neighbours, well over the alcohol limit.

Five days later, on a road we can see from the window, a gang of men attacked a house with iron bars, planks, and bricks, smashing all the doors and windows.    A video of the event appeared in the local paper.   Three Romanians were arrested.

The photographs and comments in blue are by courtesy of Mrs AsH Buchanan.

On Sunday 25 May came the denouement.

But, being the wise, cynical old fogies that we are, we are aware that  the problems of living in our neighbourhood will not improve.  Fortunately we are from the baby boomers generation - our days are limited.

For more whys and wherefores, read ...

This reminded me of an occasion when we were chatting with an Ayurvedic doctor in Bombay some time in 1981 and he said "Islam is a good religion, it's a shame about the Muslims". This statement was attributed to George Bernard Shaw but one cannot be too certain.

Then I remembered reading a quote by a Japanese convert : "I'm so glad I became a Muslim before I came to Malaysia".

While the ulamas are reminding us of  how we can multiply our pahala (with bonus plus plus) during Ramadan, it seems a good time to talk about the multiplication of our generosity and our appetite both worldly and non-worldly.

Take this article by Cheng Sim:

Muslim punters are titillated with  -

4.  But what can be more enticing in this holy month than this almost Bacchanalian (sans liquor) feast featuring 400 dishes and  10 live stations ( apa 'tu live station ?)! What is on offer?  You can plump for stuffed quail briyani, or asam pedas oxtail soup, grilled chicken and roasted goat! [Adult $188,  Child $98]

And here comes the hallmark of 21st century Malaysia.  You are always assured of CHOICES - in almost everything you want and do, anything goes!  Social media will allow you to frame, record and annotate your preferences, your very own wishes and desires.  (Where I come from, you take what's given to you - no 'yes' or 'no' or 'buts''.  I guess that's why Ash is so critical -  tak sporting, lah )

At the end of this Ramadan feature - you get to vote.

Old Malaysia, New Malaysia - the inhabitants seem to live in some kind of cloud cuckoo land.  They (especially our Muslim brethren) seem to have a blind spot and cocoon themselves from the dire reality of their fellow human beings outside of Malaysia - of their human rights to food and shelter and security.

Let's do some number crunching.  From last year's Islamic Relief Appeal for Ramadan ..... 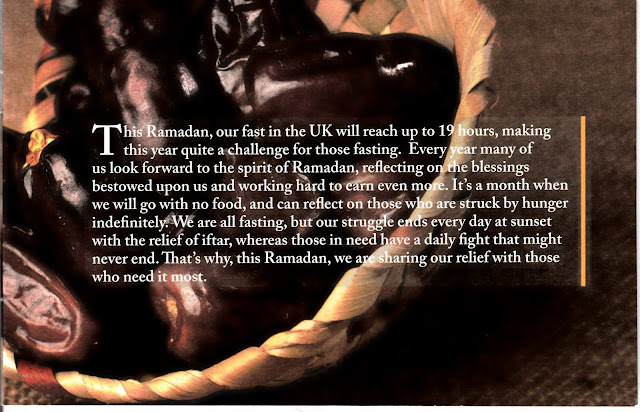 How much does an average Malaysian Muslim family of mother, father and four children spend for a single Buffet Buka Ramadan?

The providers and sustainers of Buffet Ramadan should choke on that comparison!

Furthermore, in fulfilling the Hajj, the fifth and final Pillar of Islam,  Muslims from Malaysia expend  ......

Islamic Relief, in its Appeal during Ramadan last year presented these needs and the costs involved.

Nearer home we have our own needy but we only tend to make a flying visitation during Ramadan and Hari Raya - there seems to be no inspiration for Muslim communities  and the Islamic bureaucracy to provide a long-term, continuous helping hand for their poor and disadvantaged.  "It's the Government's responsiblity" they say.

Just recently this story appeared in The Mole :

Perhaps this account may open up the minds and hearts and wallets and banking accounts of  Muslims in Malaysia especially for those intent on collecting "brownie points" in this holy month of Ramadan?


A few months ago, The Mole wrote a poignant story about a transit home for "aged" orphans who lost their founder Che Azrul Rozi Che Rozi who died at 35.   Che Azrul was a true practising Muslim who cared for his fellow humans  far, far above and beyond the ibadat-pahala-dosa syndrome.  He puts all our religious Ulamas and scholars, and all other Muslims (including AsH) to shame.

I looked up that story again : 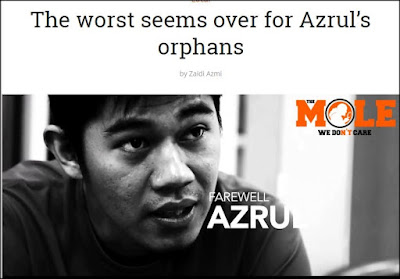 ........  and was pleased to know that with the help of  Wan Azizah, the Minister for Women, Family and Community,  they are now safe and sound and back on their feet.  Thank you  Zaidi Azmi for connecting us with what it should mean to be a Malay and a Muslim.

But being such a Malay and a Muslim is not only for Ramadan.   It is for all time and for others far beyond our kith and kind and kin.

Peace to all for this Ramadan.


Footfalls echo in the memory
Down the passage which we did not take
Towards the door we never opened
Into the rose-garden.  My words echo
Thus, in your mind.
But to what purpose
Disturbing the dust on a bowl of rose-leaves
I do not know.
Other echoes
Inhabit the garden.  Shall we follow?


The memory of Akim's passing ( 37 years ago) lives on much longer than the life he was given (33 years)  as a beloved son, brother and uncle in AsH's family.

He would have been 70 two days ago and today on the first of May, I recall this song that he used to play at our Boon Lay flat.  "Guess who cried come first of May."

Time present and time past
Are both perhaps present in time future,
And time future contained in time past.

It has been 37 years and I miss you still.