This will not do Malaysia.

14 January - Heavens forbid. An Emergency was announced by the Paramount Ruler.  We are seeing the death of democracy and freedom in this country. 👎 Bring out the black flag (and maybe the yellow T-Shirts?), get the Petitions going, 👊 especially if you see yourself as the Saviours (Hallelujah) and guardians  of the Rakyat's Free Spirit (hic! hic!) and especially as you are dedicated to bringing back the Mandate given by the People in 2018.

24 January 2021 - More wailing and wringing of hands, more gloating and self-righteousness.  WOT! it has been 11 days since the MCO and the cases are still skyrocketing , now hovering at 4,000.

This will not do!   We must petition for Parliament to return, challenge the legality of this minority, backdoor Government.  We shall show them how.

So this is our plan.

LET'S HAVE AN ELECTION.

LET'S ELECT A NEW GOVERNMENT FOR A NEW (SERIES 2) MALAYSIA.

LET'S HAVE ANOTHER SABAH-STYLE ELECTION AND EXTEND IT TO THE REST OF THE NATION - BRING THE 'SABAH VIRUS' TO MALAYA.  (Remember the speech made by the Sponsor of THE VIBES in September 2020 when he said, amongst other paeans of praises to Sabah, "Malaya has an infection and Sabah/Sarawak is the antibiotic we desperately need."!!)🙏

(Explanation for the young and deprived: When I started buying Iznogoud Comics in 1975, I never thought how apt it would be to the politics of my Tanah Air wef from 2019.

Here's the rallying cry of The Great Revoluton and Struggle of the Brave People of  Malaysian Malaysia.

And in the end, it will all come true, maybe in a few months' time, perhaps in a year, perhaps never?

But not before Covid 19 tears this nation into shreds (especially the Rakyat)   However the ambitious, rich and powerful will survive, a sort of  culling of the weak and inefficient and unenterprising,  indolent, lazy and pursuing a deficient value system.  (Now where have I heard that before - Charles Darwin??  Naahh! Darwin's more intellectual than that.)

That's enough frivolity AsH.  You are getting high on your Kopi Kampung!  Let's get back to basics, to please the chorus (sometimes raucous) of disapproval about Malaysia's Peformance in controlling Covid 19.  We are not doing enough to curtail Covid 19. But tell me which country has?

As I am fortunate enough to put  my feet up to rest in two cities, Kuala Lumpur (12 years) and Leicester (36 years), let me make a comparison of some salient features of these two countries that I call my home.

C'MON MALAYSIA, THIS IS NOT GOOD ENOUGH ESPECIALLY SINCE YOU RENEWED THE MCO AND IMPOSED THE EMERGENCY.  YOU ARE TRYING OUR PATIENCE!!!!  😡😡

Oh yes, must not forget this contribution by a Sabah researcher Dr Audrey Teh Yi Hui working in London who lamented " I'm from Malaysia where we don't have state health care and I've seen families bankrupted by medical bills."

.......  yesterday our dear friend in Leicester sent us this picture of their garden.

Jackie wrote : Yes, hope you're both ok, apart from homesick?  The Covid situation here is dire, Leicester hospitals struggling, and on the local radio they were saying they need more mortuary space.

Jackie is a retired SRN (State Registered Nurse) and Julia is still serving in Leicester's NHS.

To all the Frontliners in Leicester and Malaysia, keep up the splendid work.  We are rooting for you.

2020 - The Year the Planet lost its colour and reverted to black and white.

Paul Simon's "Kodachrome", like almost all of Simon and Garfunkel's songs, is quite poetic.  In this particular favourite of mine, Paul Simon writes "Kodachrome makes you think all the world's a sunny day".

Before Covid 19, we tend to view our world in gorgeous colours, there was no end to the pleasures and fun (with the aid of high technology) we could wreak on this planet despite the colour of blood in Gaza and Palestine, in Iraq (twice), Libya and Syria.  Of course, hunger and poverty and greed have no colours to titillate or anger us at all.

Although I have played this song umpteen times on my vinyls,  I realised this morning (after a brief lesson from the spouse) that Kodachrome does not refer to colour negative films, and the resulting  pictures that we get from clicking our non-digital cameras.  That is in fact Kodacolour.

Kodachrome is for slides , for producing positive transparencies.

In comparison to Kodachrome which "gives us the nice bright colours",  Paul Simon added this: "Everything looks worse in black and white".  But I still prefer the nostalgic black and white.

Here are some of my favourites from the spouse's black and white collection on Singapore. 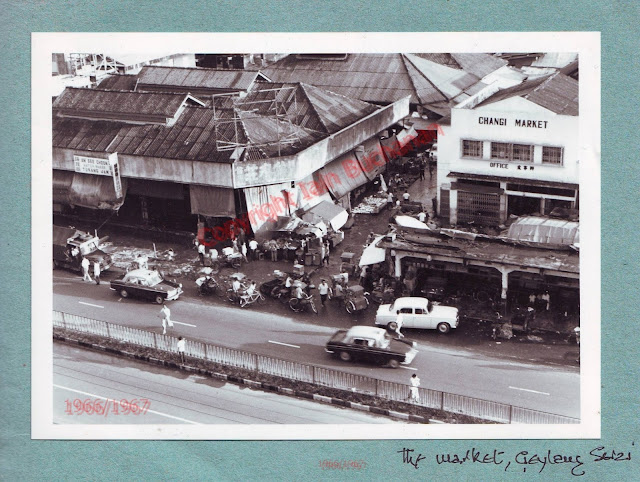 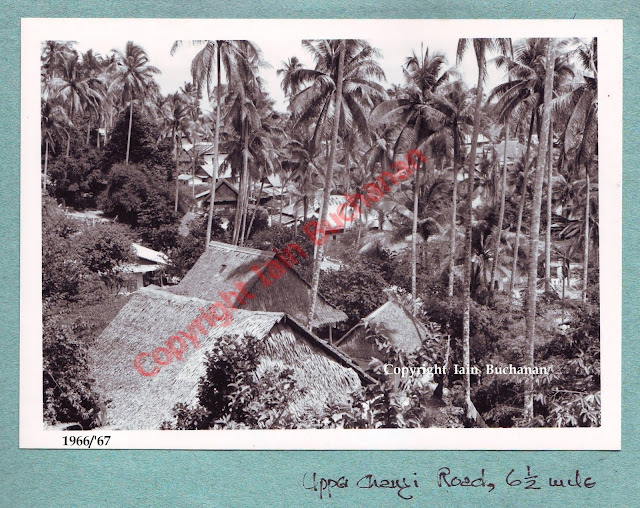 When things are seen in black and white, indeed they look grim and dreadful.  But like the photographs above they can be beautiful and honest.
Wawasan 2020 Malaysia, ridden with Covid 19 has wreaked havoc, grief and despair on almost every facet of our existence.  But we have also seen the exposure of the nascent and underlying frailty of a complacent and selfish people.
We are confronted day by day with the antics of our Rambo-like politicians, political parties and NGOs. The Kelentong elite amongst our intellectuals, our pontificators, media merchants and moghuls, bankers, movers and shakers of the economy  together with their Zougou and Barua  (lackeys/ running dogs) become more and more transparent just like the revelations of more and more new clusters of  positive Covid 19 cases.
Such telling times like 2020 can however bring a shaft of reality to remind us to be a little more cynical and critical about the great and good in our midst. Just a few weeks ago we were caught or rather captivated by this news.
https://www.scmp.com/week-asia/lifestyle-culture/article/3114478/dai-syeds-rape-and-sex-charge-test-god-malaysias
How could this be?  One of our very own home-grown Malay-Muslim preachers, bearing the very much vaunted and  respected title of "Syed"?  You would expect this of our Mat Rempit, our young, hedonistic and westernized liberal set, what my dear ole Emak would term as the "Kutu Embun".
Here are excerpts from the South China Morning Post.  The foreign press are really lapping it up: about this disgraceful blot on what they see as the smug and self-righteous Malay-Muslim landscape of Malaysia.

And when this is the response of the Minister in charge of Religious Affairs in the PM's Department to  the heinous (though still alleged) crime committed by a Muslim preacher; then the Ummah and the Muslim authorities should stop yelling Murtad when young Muslims turn away from Islam.  And when Islam is mocked and insulted by non-Muslims, they either have to take it on the chin or stop crying "Islamophobia"! 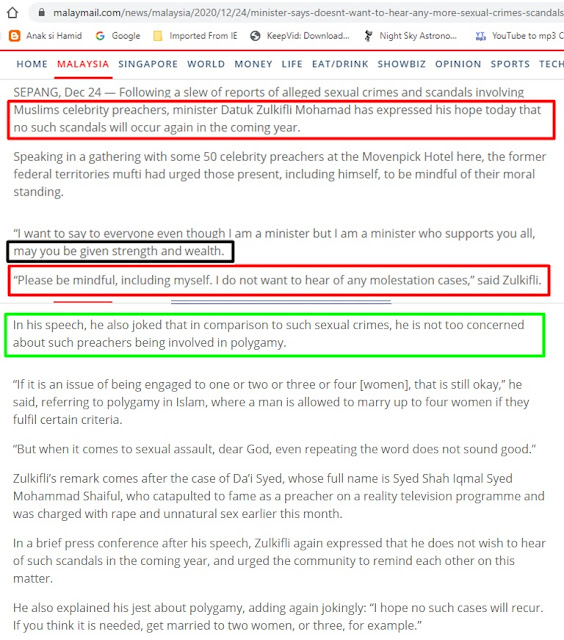 The gist of his regret(?), sorrow (?), concern (?)  revolves around
1. Now boys, don't do this molesting thing again, at least "in the coming year" - up to 2021 I reckon. "Please be mindful".  For whose sake? The molester or the victim?
2. As for polygamy, go ahead "if you think it is needed" - (nudge, nudge, wink, wink! If you know what I mean eh? if you know what I mean).
NB  The paragraph I have bordered in black suffers from a mistranslation and/or misrepresentation - "May you be given strength and wealth".  It is highly probable that what is translated as "wealth" actually means "murahkan rezeki" .  Wealth is "kekayaan, harta benda", as in material goods and fat wallets.  "Rezeki" is a combination of happiness and prosperity, in earning your bread and butter and to be lucky in money matters as well.
The writer of this article in the Malay Mail is Danial Dzulkifly.  ?????
Below, in Caption 1,  is an extract  from today's Utusan Malaysia which highlights the kind of action that our Islamic Bureaucrats should be involved with to counter such unreligious and immoral behaviour among our Muslim preachers.
If they can regulate a system to monitor and apprehend ordinary Muslims who don't keep the fast during Ramadan, those who commit khalwat, and those who frequent the houses of sin, why can't they find the will and the means to monitor, regulate, charge and punish the sexual predators in their own house?
Overpaid, overfed, overbearing, oversexed and over here.  That was how the Brits described the presence of American soldiers in Britain during the Second World War.
Well, Malay-Muslims now have their very own home grown "overs" who are now over here.  Harapkan pagar, pagar makan padi.  Such an apt Malay proverb.  Wish I could translate that into Arabic and English.
The above extract (Caption 1) came from an article in: 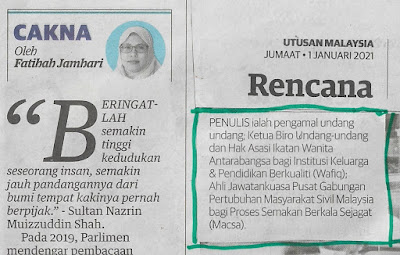 Also read :
https://www.malaymail.com/news/malaysia/2020/12/24/minister-says-doesnt-want-to-hear-any-more-sexual-crimes-scandals-involving/1934697
https://www.bharian.com.my/hiburan/selebriti/2020/12/768767/saya-tok-sey-dengar-cabul
======================================
How much blacker can 2020 be for Malay-Muslims in Malaysia?
Let the Malays screw the Malays.  Now that has been racheted up to : Let the Malay-Muslims screw their fellow Malay- Muslims.
In 1789 Marie Antoinette, wife of France's King Louis XVI said to the poor and hungry peasants who had no bread, "Let them eat cake".  Came the French Revolution and nearly the whole lot of the Monarchy and Aristocracy were guillotined.
Our Malay-Muslim version is  "Let them eat meat that has been passed off as halal"  - imported by a meat cartel who were supervised under the watchful eyes of Jakim, Veterinary Services Department, Malaysian Quarantine and Inspection Services Department, Customs Department  and  Port Police. 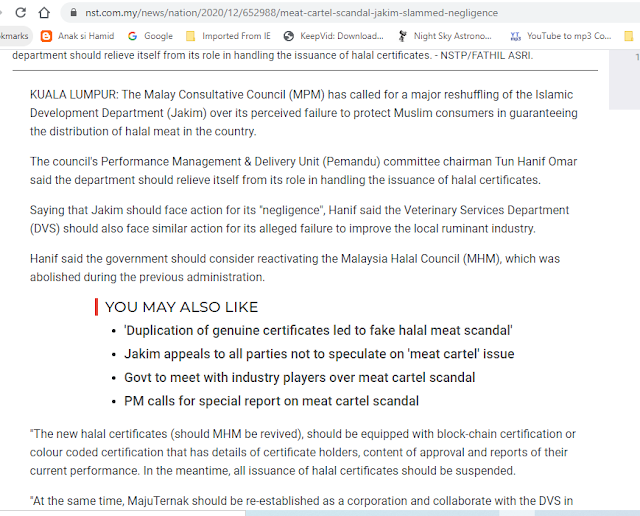 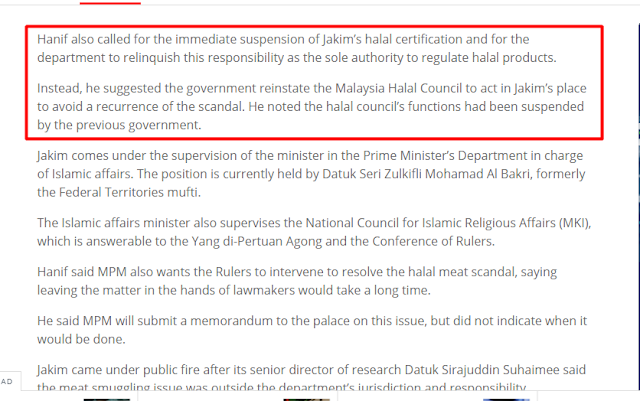 2020 reeks of the odour of hypocrisy, high-mindedness, devout righteousness, and so-called care for the Rakyat and the Ummah.  There is no vaccine to counter this sickness in our midst.  This is life in black and white in Malaysia.  It is a picture that is brutal and honest.
Malaysians, most of them, are not lacking in education.  But despite that, I fear they "cannot read" or they scorn "the writing on the wall".
I'm fortunate to have my photographs ( gifted by the spouse) in black and white, reminders of what is undoubtedly a  more innocent life and landscape that is not as sanctimonious, greedy and self-righteous as the last four decades.  I have not left my country.  My country has left me.
Last but not least.... 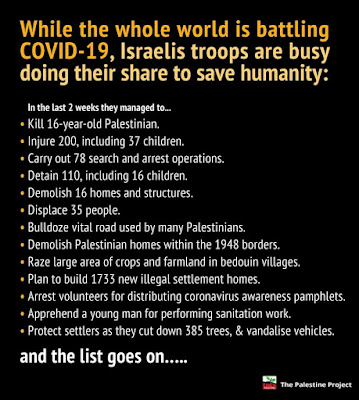