AsH was as usual sitting with Socks (our cat, not his foot apparel) on her lap, indolently passing away her time on a lazy CMCO day (a habit attributed frequently to my people).  She made the mistake of dumping Socks back on to the chair and proceeding to the laptop to catch up on the latest news.

Cor Blimey!!! (to be in tune with work and play on the second floor of a  London greenhouse).  I learned something new and devastating about my Tanah Air. 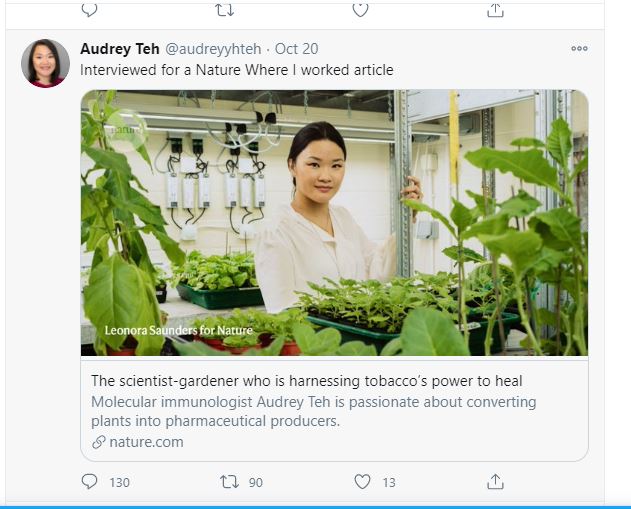 No "state health care"?  Is this about Malaysia 100-200 years ago?  Have we been downgraded into some kind of Banana Republic?  A "Republic" is probably in the line of sight of some Malaysians.  But 'Banana'?  Not when we have such well-heeled Anak Malaysia like .....

..... and of course the formidable entrepreneurs who became self-made billionaires.

How can any academic/writer/ journalist / researcher,  in his/her right mind think that a country like Malaysia - which can spawn and boast these self-made billionaires - be unable  to afford "state health care"?  I cannot seriously think of any country in the world that can be caught in such a dire predicament.

Malaysians however can be very proud of their Director General of Health Tan Sri Dr  Noor  Hisham bin Abdullah when he very quickly responded to Virginia Gewin's ignorant article on Malaysia's Scientist-gardener Dr Audrey Teh from St George's, University of London.

The DG and all his medical and non-medical staff in the Ministry of Health, have been and still are working their guts out during this Covid 19 pandemic especially in Dr Teh's home-state of Sabah. 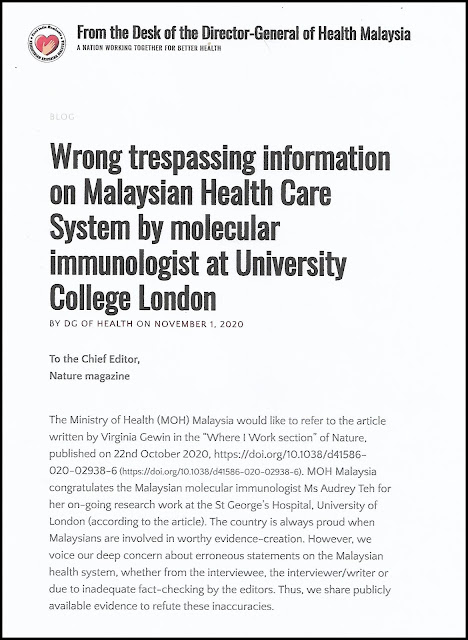 Hallelujah! There was a response from the writer of the article yesterday (4 November) which was posted on Dr Teh's Twitter.

But first here's a little look at the author Virginia Gewin.

Quite a telling quote by VG on what America has to do to survive: "It must relearn how to speak, and how to listen."   Ditto for you VG though I have to add one more for you, "how to be a responsible writer."

Here is Virginia Gewin's and Dr Audrey Teh's response to the Director-General's letter:

A clever tweak from THIS:

It doesn't seem like much of an apology or saying "we are sorry if we hurt.......",  but we shall take comfort in the meaning of the word "erroneously" which means "ideas or information are wrong  and based on facts that are not correct.
But the damage is done!!
I believe, if anyone or any publication makes the accusation that Singapore "does not have state health care" - they would be taken to the cleaners if no abject APOLOGY is given.
However I'm still a bit confused about this bit :
"It also overstated how some families have been affected and missstated Teh's affiliation."
1. What is "Teh's affiliation"?
2. What part of "Teh's affiliation" has been "misstated"  (made wrong or inaccurate).
I can only guess that maybe Dr Teh has no affiliation to Malaysia the country, that she is not a Malaysian citizen.  That she is only "from Sabah".   But what difference does that make?
Despite the "correction", we are still in the dark as to who, Gerwin or Teh, got their their information and their facts wrong ?
But maybe this is just a story as stated in the  'Updates and Corrections' - a kind of fiction?  Maybe not the tobacco part, but the piece regarding Malaysia and her non-existent "state health care."
One more point referred to in the "Correction" - about "health care not getting to certain parts of the country."  That is to be expected in a developing country where the terrain can be heavily forested and mountainous and the transport infrastructure is nothng like in the rural areas of the Lake District or the Cotswolds.
But as to being ruined by medical bills, that is possible if you opt for private medical care.  Whatever the private hospitals can offer, the Government Hospitals can do the same. Of course it won't be as quick as you mightwant or get in the private sector.  But you do  have an alternative without being "ruined by medical bills."
Let me add this observation of Malaysia's health care by an Anglo-Scot 'bumiputera' from Dr Audrey Teh's adopted neck of the woods.

The above 4 excerpts are from an email that DI Buchanan wrote to Dr Teh's Head of Department yesterday.
Finally (at last), from AsH to The Star :
I am quite amused that The Star's  Bernard Cheah reckons that Malaysians are (merely)upset by that article in Nature magazine. 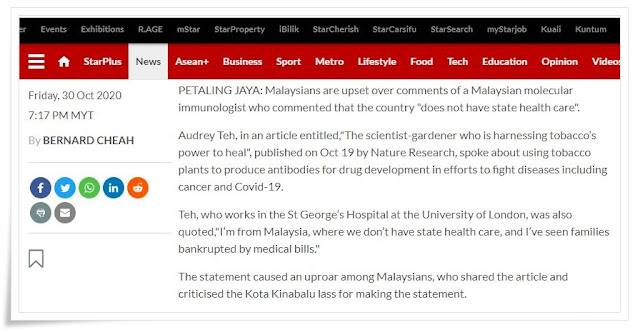 Now that is what I would describe as an 'understatement'!
There are so many other pertinent verbs to describe how we Malaysians feel.  To The Star, take your choice  from the list below. 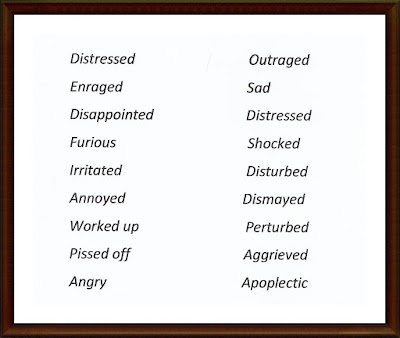 And I find it quite charming that Bernard Cheah regards Dr Audrey Teh Yi Hui as "the Kota Kinabalu lass".  Aww shucks... how nice.
Let's have a very British break with The Goons, a sort of  'Zen moment'.
PS I have not forgotten Part II of "Chiak Boh Liau".
Posted by anak si-hamid at Thursday, November 05, 2020

Msians made such a hoohaa over the crispy rendang.... but not for this one though. For some odd reason, certain groups of Msians living abroad are pretty fond of badmouthing Malaysia. Maybe, whats-her-face,doing her tobacco research, has not been or lived in the USA... now thats a country where ppl do get bankrupted by hospital bills. My late mum-in-law paid like 7k USD just for hearing aids.Luckily, shes covered by the US army veteran health insurance.

Our Malaysians do have a weird sense of priority.

There are a sort of Malaysians abroad that make a career of slagging off this country.
They seem to forget that it was this "corrupted, racist, prejudiced" country that enabled their ancestors to pile up loadsofmoney to enable their descendants to be moonlight westerners in USA, UK, New Zealand and Australia. Kacang lupakan kulit the whole jing-bang!!