It has been a long while since the last bicycle ride but the interval has been well spent.

I had dearly wished - during this stay in KL - to visit Lely and Macik Alimah  (Jai's mother) in Singapore.

We usually travel to Singapore on the Aeroline Bus from KL, across the Second Link to the Singapore Harbour Front - a journey which takes about 5 hours.  But this time, a spouse with an unviable back made such a journey impossible.  Then last week, my former student Din (aka Rockybru) came to the rescue and kindly provided me a door to door 'delivery' by car  from KL to Singapore and back.

Thank you Din for your 'korban' for your old teacher.

I spent all of Tuesday with Lely and kept her company while she was doing her 2 1/2 hours intensive therapy at St Luke's Hospital.  She will undergo another operation in February to remove the residual clot.  She has all our prayers but I know from watching her determined and relentless effort to get better, she will be just as positive and courageous when the time comes.  In the evening we had a get-together for mee rebus at Macik Alimah's flat at Boon Lay.

And thank you Jai, for ferrying us from Dover Road to Boon Lay and Jelapang Road.

After I got home on the Thursday, I had a chat about the Singapore trip with my neighbour Zarinah.  Then her youngest son,  little six-year-old Haiqal came up to me and asked, with a censorious fire in his voice, (quoted verbatim)  "Why did you leave Uncle alone at home?  That is impossible!"  (He meant 'unacceptable'.)

Dear oh dear, I'm being told off by this little tyke for being - in his eyes - an errant wife.  I did try to explain but I don't think he accepted  my reason.  And now, each time I nag the spouse he threatens to report me to Haiqal.

But never mind, when we're back in Leicester, Haiqal won't be able to protect him.

After Hari Raya, it was back to the routine of a thrice weekly trip to Tung Shin Hospital for the spouse's Orthopaedic Therapy and with fingers crossed and heart in mouth, he may just make it for the journey back to Leicester in two weeks' time.

I started this post intending to write another bicycle story.  But Haiqal's admonition of AsH had to be recorded to warn other wives to beware of getting on the wrong side of  little people like this MCP , meaning Macho Chili Padi.

Off to bed now,  and hoping I don't have nightmares of being hounded by a fiery two-legged chili padi.

Posted by anak si-hamid at Wednesday, October 31, 2012 No comments:

From my collection of old textbooks :

I never got this far in my Malay language lessons during Primary School - for reasons not known to us.  All in all I had only 2 years of  learning my mother-tongue.  However  in our wanderings from bookshop to bookshop in Singapore, Batu Pahat, Muar, Kajang, Kuala Kangsar and especially Penang I became quite obsessed with collecting school textbooks in Malay and English.  They are fascinating because they featured not only the education system pre-war and post -war, but the social and economic conditions of those times.

These books have travelled with us from Singapore/Penang to Leicester where they took up a good deal of our living space for 17 years before we brought them 'home' to Kuala Lumpur.  Whenever I get weary, coping with the twenty-first century,  I retreat to these books for a good dose of nostalgia for the good days of long ago.

This chapter from Latehan Bahasa Melayu got me going on a magic journey on bicycles. 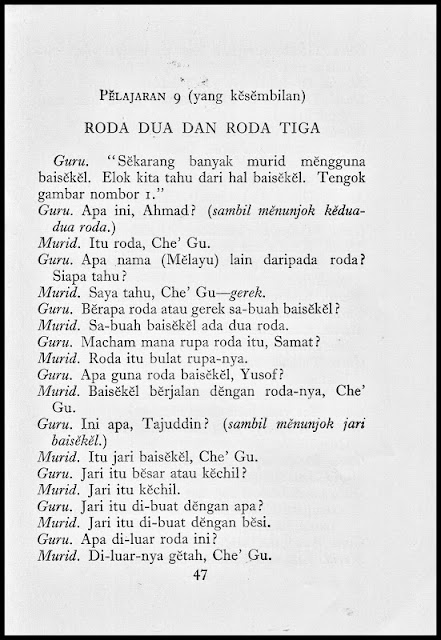 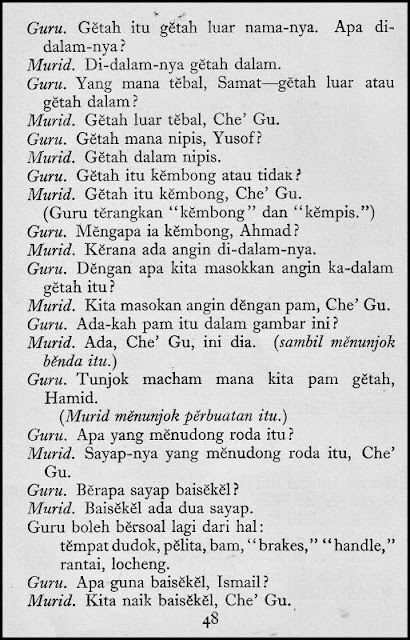 I have learned several new words from the above text.  Gerek is another word for roda (wheel), sayap refers to the mudguards, bam means the wooden handles of the bechak dua roda (rickshaw).  However 'brakes' and 'handle' remain as such, although the dictionary uses rem for brakes and a handle is also a pemegang or hendal  But this was after all,  the 1950s. 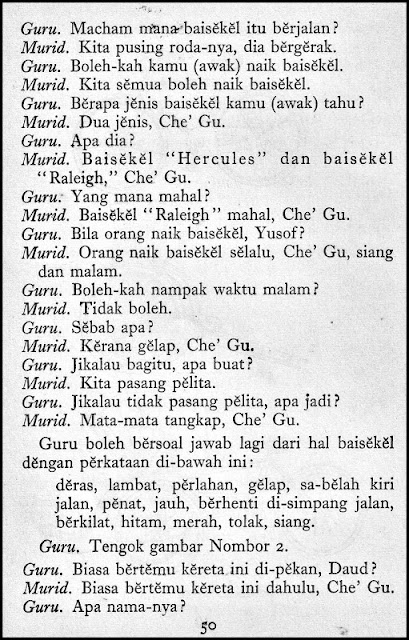 Page 50 is interesting because of the two bicycle brands mentioned - Raleigh and Hercules.  Of course the Raleigh is top of the range and in 1952 a loving father had to part with about $160 to keep his offspring quiet and active on a Raleigh.  As for the Hercules I was told by the spouse that the boneshaker bicycle he had been using was a Hercules!   Here it is with my own nameless bicycle and Fido (the cat) who made it a habit to use our bikes as a launching pad to get up and down the wall. 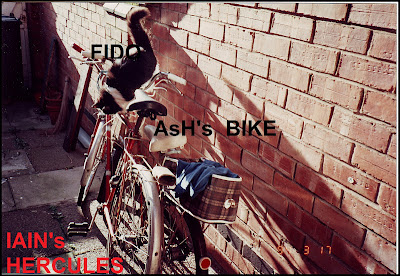 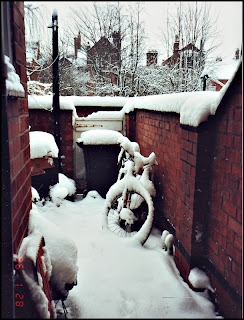 That little bike took me on umpteen little journeys to the market at the City Centre.  We took several sorties cycling in the posh parts of Leicester.  When we passed through the working class area, someone threw a stone at me simply because of my colour.  And there was the time when I was pushing my bicycle up a steep slope, and a mixed black and white little girl, aged about eleven yelled at me, "Chinkee, go home!"

As for that lovable little bicycle, Iain  lent it to this  little West Indian  girl when someone stole her bicycle while she was delivering the papers in our street.  Her father, much, much later, returned it to us but with the front wheel in a right sorry state. So there you are - "Neither a borrower nor a lender be."

I have always fancied a Raleigh.  The Rudge bicycle that my two brothers and I shared was our pride and joy.
I was always very happy when my mother asked me to get her kelapa parut from the one shop at the 4th milestone, or  small items of grocery that she had forgotten to buy, or post letters and cards at the 7th milestone Post Office.  I would immediately grab the Rudge away from either of my two brothers who were having too much fun with it - and soon I'd be cycling and flying away like a bird on the wing, so to speak.  (Also it gave me a chance to wave a hello to my heart-throbs, Ng Kian Ann and Ang Hock Kee as I cycled past their house.)

As for the Raleigh - sometime in 1993, when we left Penang after 2 years at USM,  my mother gave us a prezzie of $1,000 because she thought it would be useful for us back in Leicester.  Well, we bought two brand new Raleigh bicycles from Halfords.  Everytime we took to the road and cycled on the tracks alongside the Canal, stopping to pick blackberries along the wayside and resting for a picnic we think of mak and thanking her for this joy.

I brought  both bicycles back to KL with all our books and phonograph players and vinyls.  I had to dismantle them for packing and they remain still in parts because I can't get any shop to put them - like Humpty Dumpty -  together again.  This is all I could retrieve - the sayap. 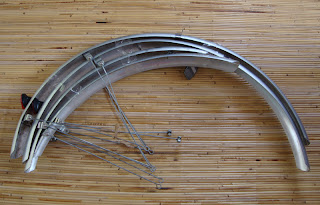 We have all owned or shared a bicycle in our time.  Two problems occur for any kid who desires a two-wheeler.  Firstly, you need to persuade your parents to buy you  one.  Then comes the most traumatic part - learning to ride it.  It causes you a lot of cuts and bumps and tears to the skin and trousers.  More dreadful is the humiliation of falling on and under and over your bike.  But after a great deal of physical and mental scars you eventually make it.  Best of all, you never forget how!

I'm back at my favourite activity -  rummaging through my collection of old school textbooks and discovering  how bicycles, both two-wheelers and three wheelers were very much a popular topic.  How different to today when children are more interested in luxury cars, Facebook and computer games. 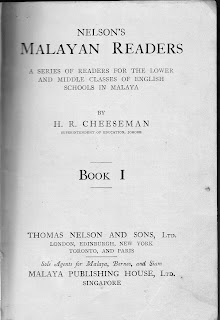 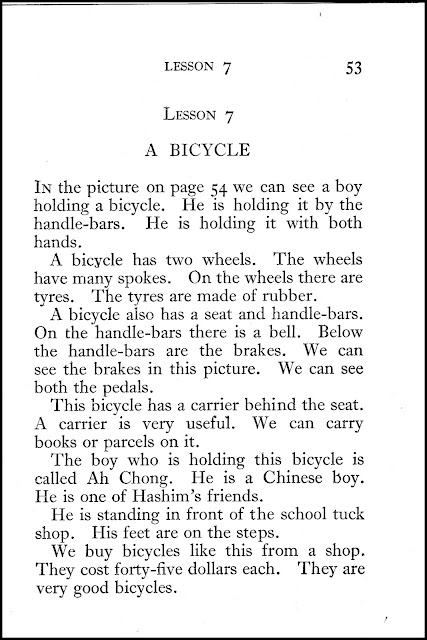 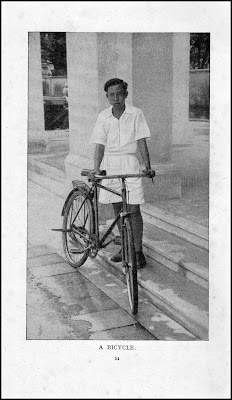 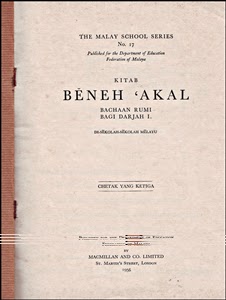 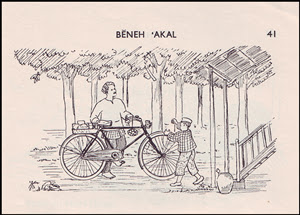 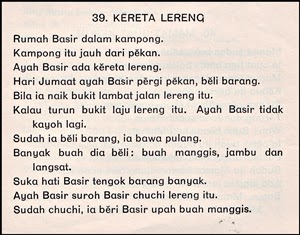 Ah Chong lives in the town and Basir is a kampung boy.  It seems that this two-wheeler, first invented by a man called Macmillan from Scotland held together the Chinese and the Malay and town and kampung.

What a shame that this tie is now broken.  Can you, today, imagine Ah Chong from the small town of Gemas and Basir from Kampung Tongkang Pechah  dressed up to the nines on their bicycle, looking like this? 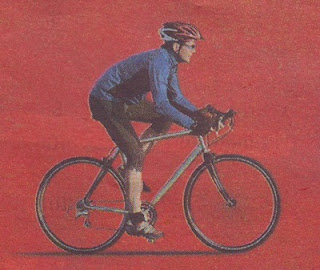 Posted by anak si-hamid at Wednesday, October 17, 2012 No comments:

The Postman for Lely

My Internet, which had been playing up for more than a week ever since TM Net supplied me with their Modem, completely gave up the ghost on late Friday, all of Saturday and Sunday and Monday.  It was only by Tuesday morning that I got the service I paid for.

I wanted to do this posting for Lely before she went for another MRI Scan and angiogram - which would determine the next step for her on-going post-stroke treatment to remove the remnant clot in the brain.  I know how searingly distressing it is for her when the 'wiring' for the angiogram moves up her body to end in the brain.

I can only imagine what this bright and active young woman had to cope with - 9 months (so far) of living with only half of her mobility. I want to bring back the smile to her face; to rejuvenate her zest for life and the world around her.  So Lely, better late than never eh?

I want to remind her about her happiest two weeks in New Zealand and to reassure her that such days and times will come again.   Hang on girl, don't allow these past 9 months to weaken you and bring you down.

To whet your appetite, here are some delicious instances of yum-yum times.


Take heart dear Lely, put on your sunshine hat and we shall take to the road again, soon, InsyaAllah.

Good night  maknyonya and dream of this night at Paekakariki.


And remember you have a big job to do for Darby and Joan - to light up our fire to keep us going. 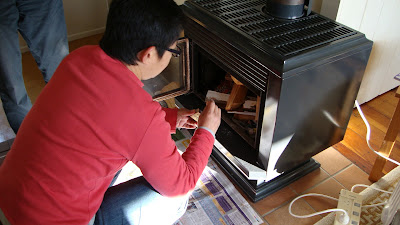