THEY CAME - THEY STAYED - THEY ATE 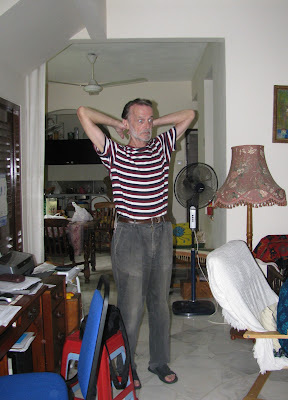 This was the stark look of fear when Lely, Ruqxana, Roy and Shyama turned up just before the witching hour on Friday 23 July.

After scrutinising their tent 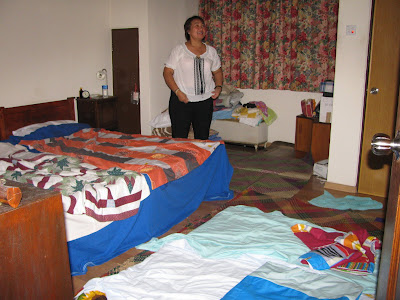 for bugs (organic and technical) and hidden cameras, they got to bed but not to sleep.

We all had tosay on Saturday morning except for our virus-ridden Ruq who could only partake of a lonely oats porridge breakfast. 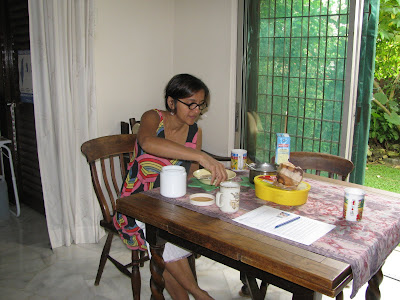 Oi Bek and Irene arrived late morning with my foldable bicycle (thank you!) and two more hungry mouths to feed. As they didn't feel like going out to eat, I managed to scrounge in the freezer and found a 6 months old (ha ha) box of frozen pasta sauce. So that was lunch served from freezer to stove to table. 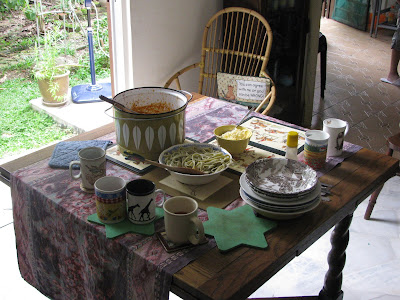 Ruq had to go to the clinic for antibiotics but her mates were there to give her moral support. 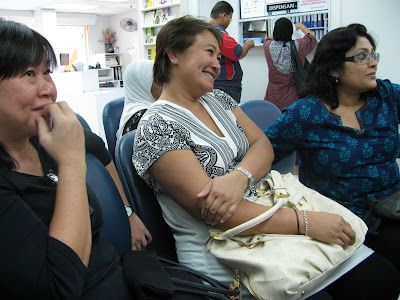 They then went on a hunting and gathering and shopping expedition to sort out dinner. 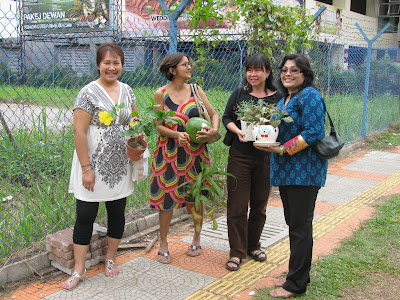 But they later realized only the watermelon was edible. All the rest of the greens had to be planted in our garden!

They are seen here prowling around our neighbourhood looking for firewood, leaves and edible fruits and branches to cook a green and uncorporatised dinner. 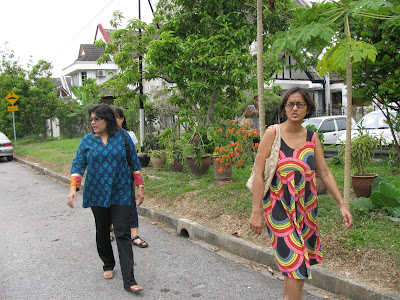 Fortunately they kept away from the neighbours' papayas and mangos because these Singaporeans could not recognise such fruit trees. (ha ha! Stop it. Don't hit me.)

Because Roy had not eaten sayur paku (ferns) for the past 30 years (it's not part of the Aussies' tucker), I cooked them this plateful 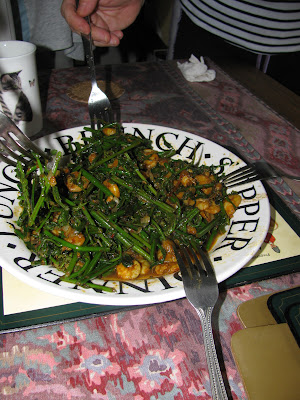 and they had it for tea time! They will eat anything at any odd time.

They had a whale of a time larking about in the garden. 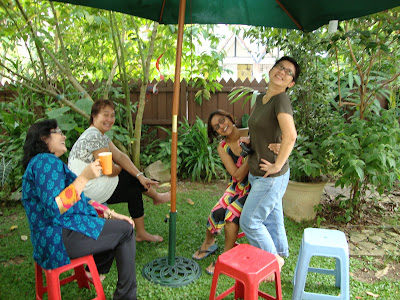 But Uncle and Teech were about ready to climb the walls and even thought of lacing this mob's food with 500 grams of Valium! 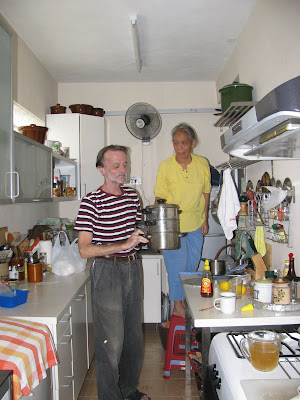 Uncle was in dire need of male company and he got a reprieve when sunnysideup turned up. 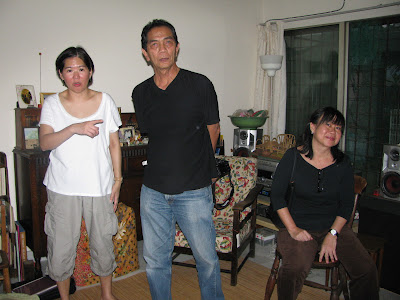 Oi Bek: How did he get in?
Sunnysideup: All these women? Is this heaven or hell?
Irene: I can give you Lucifer's room number - 0061!

More reinforcement came in the shape of Din 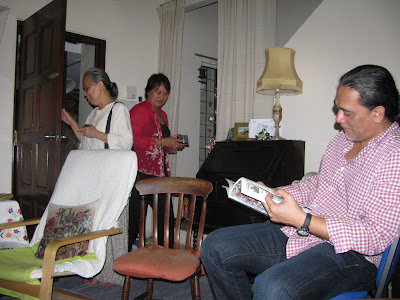 but he was too absorbed looking for incriminating evidence of his dastardly past in the old JSS School Magazine.

We decided to take a raincheck on the girls' offer of cooking dinner. Thank goodness! Before stepping out for the nearby restaurant Mus offered to take the obligatory group photograph. Could not decide which one to choose because they all looked awful. So I am posting both. 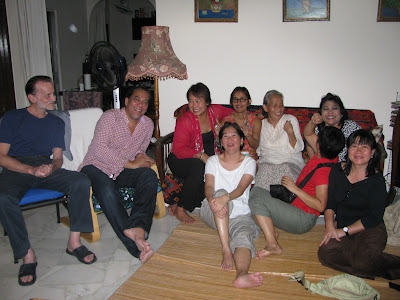 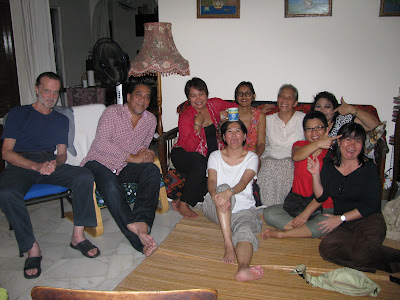 It was such a glorious evening sky when we left for dinner. 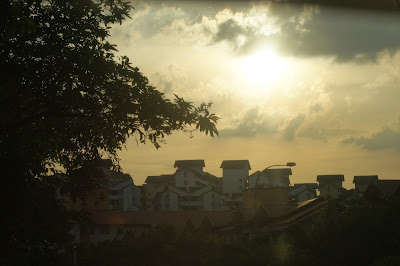 (Photo by courtesy of sunnysideup)

Sunnysideup, when comes to food we not so stupid one lah, lu jangan cari pasal..

AsH, i too love the first photo of Uncle hahaha.. Are there more coming ?

But wait...it didnt stop there with the makaning! While travelling in the train to the airport, we started feeling hungry again. The minute we touch down in Spore, apa lagi makan again
What better way to celebrate our friendship with food and more food

He still believes, like a good chappie should, that chappals must be worn at all times - even indoors.

Good to hear from you Mr Bojangles,

The Scotsman was advised by his late mother-in-law to always wear slippers on the 'lantai simen' (cement floor)
To my mum , any sort of non-wooden floor is cement floor.

Now that he suffers from arthritis, he understands why indoor chappals are necessary.

A Scots lady wrote the same sentence many years ago in my autograph. I thought it referred to something that smelled awful. Much later I was delighted to be told it meant 'Long may your chimney smoke'.

Thank you for reminding me of that saying.

ph's uncle hahaha is now an ouchouchouch - quite knackered this wednesday.

I love this post. You could write for TV, Auntie. Better than Spana Jaya ;-) ~ Daphne

I'm afraid my 'spana' will not berjaya.

I really enjoyed that pasta sauce.
I have been thinking about it now and then. It would be nice to have that pasta sauce again.. :) :)
Thanks very much for letting us hang out at your place,
luv, b

How are you? And how many times have you been at this Venue?