Insolence from a 4000 year-old Value System.


The barely 200 year old (dating from 1789) Semenanjung Tanah Melayu aka Malaya aka Malaysia  is made up of some of these peoples from Asia.

There are the natives, the bangsa Melayu or Malays of the Semenanjung,  the bangsa Cina  from China and bangsa India from the Indian sub-continent.  The last two groupings belong to two of the four great civilizations of the world - with a long pedigree behind them.  (Babylon and Egypt are the other two).

It is puzzling that the peoples of these two great civilizations should find themselves cast into the Malay Peninsula, this finger-like extension of the Asian continent. The Semenanjung, before the penetration by Christian Europeans was known as quite an inhospitable area of dark forests, muddy rivers, hot and humid climate and almost  uninhabited except for the coastlines,along the river-banks and estuaries where Malay chiefs and Sultans had set up their own territorial Sultanates sometimes in conjunction with other Malay chiefs and Sultans from the Southeast Asian Malay Archipelago.  This political and cultural setup was in many ways very similar to the beginnings of the history and culture of the countries that make up Europe today.

Who knows, if we had been given as much time and freedom from Colonisation as the European nations : the Malays of the Malay Archipelago could have 'developed' their  Archipelago politically and advance the existing trading and mercantile network between their various entities.  Perhaps like in the history of Europe, which was peppered with many infightings,  wars, deaths by assassinations, guillotines and being drawn and quartered, internecine squabbles, rapings and lootings and having an incorrigible King like Henry VIII of England who changed the country from Catholicism to Protestantism just so he could divorce his first wife;  the Nusantara might have gone through such a colourful tapestry of 'development' and nation building.


The Malays and their Sultans , their Admirals, Generals and merchant class could have had  a right old wild and gory romping history- just like the Europeans.  Alas they were denied the political and economic 'rite of passage' that other civilizations went through.  Because,  along came Western firepower, Capitalism and Christianity and the huge import of foreign workers to service the purpose of the Empire.  The Malays were  emasculated  into (so they claim) boring, lazy, indolent, untrustworthy, shameless people; and everything else you can throw at us, including the kitchen sink and our Value System!

The Malays they reckoned. should be left as padi farmers, fishermen, policemen and also cannon fodder to protect the Empire and later their Tanah Air.  Oops, I forgot.  When the Malays leave their cosy villages for the urban centres, they can be assured of vocations like becoming a driver, a  gardener, servants (but not chefs because you see, they have this particular aversion to the pig!) and if they can read and write, maybe they can be employed as peons and office boys and mailmen.

Just think what the EC is all about - to re-patch and unite the old warring nation states.  One feature, amongst others,  that member states are unhappy with is the freedom of movement of people across the borders within  the EC.  Wow, I thought.  They inflicted that licence (for people who are as different to the Malays like chalk and cheese) on to our part of the world and we have to live with the toxic consequences.

What is all this preamble about?  I wanted to set up a background scenario for what is happening to this Golden Chersonese, to the insolence  coming from the descendants of 4000 years of culture and civilization,  from those who in our peribahasa , 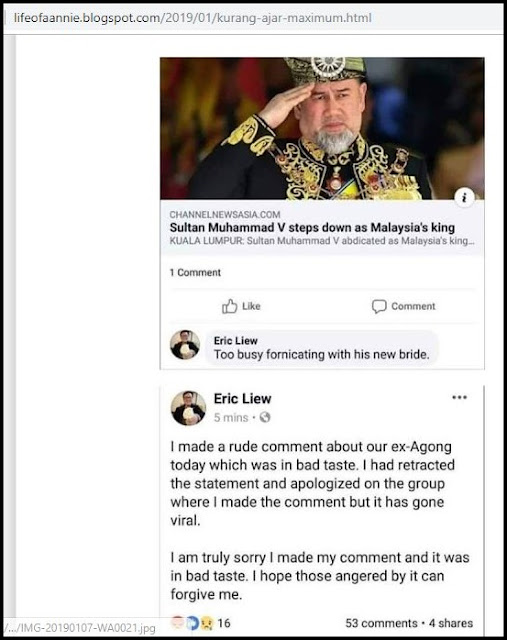 You did not just make "a rude comment".  Thank your lucky stars that you are in the land of DYMM  Yang di Pertuan Agong and not in Thailand. You have perhaps validated this version of the sayings of the great  Chinese philosopher Confucius.

The ultimate question is, "How did this multi-racial,multi-lingual, multi-religious democratic country foster the foment of such renegades?"

WHO LET THESE DOGS OUT?

The maps in colour are from A New Atlas of World History by W and A. K Johnston and  J W Bacon, 1956.  The one in black and white is from Wheatons Atlas of British and World History,1949.

really sick and tired of when we the malays defending our ways were called racist...but when you defend yours were call it your basic human right..