It never rains but it pours.

After the infection and the antibiotics, it was followed by a rash because of an allergy to the penicillin in the antibiotics! The treatment is worse than the ailment and so I have no choice but to give in - rashly and recklessly - to more drugs, to steroids and toxic chemicals. Scritch! Scratch!

The only antidote was to go fossicking in my junk room 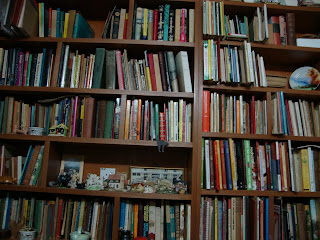 where I located these dictionaries made for the Empire's Sahibs.

Well, during the heyday of the British Empire, the 'vernacular' languages were also studied for specific purposes. Take this dictionary (1927) 'Cooly Tamil'. 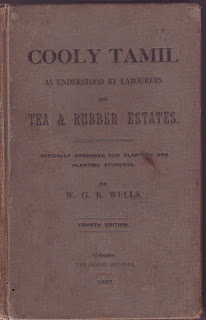 It was described as "Cooly Tamil as Understood by Labourers on Tea and Rubber Estates. Here's a sample page. 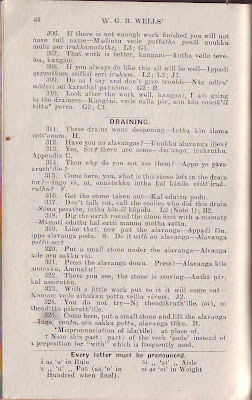 The Chinese language was somewhat spared this denigration because China under the Manchus, or the Kuomintang, or Mao Tse Tung and the present Government was a power to be reckoned with and the West cannot afford to patronise this Middle Kingdom. There is this book (1922) 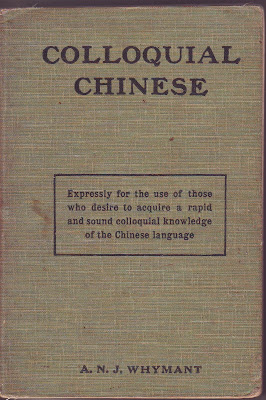 Who else would find this book useful but the Straits Settlements Police Force in their hunt for members of the Chinese Secret Societies?

In Malaya, guide books to the Malay language (just as in Tamil) took on the tone of a master to subordinate relationship. McHugh's 'Handbook of Spoken Bazaar Malay' (1945) dealt with

The 'Malay for Beginners' (1928) provided this interesting conversation. 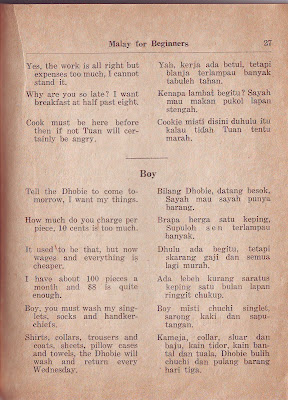 The Malay language was also used by the Tuan to communicate with the Chinese and Indians in Malaya. Besides that it was also used as the 'lingua franca' between the three non-white races in the Malay Peninsula. According to McHugh 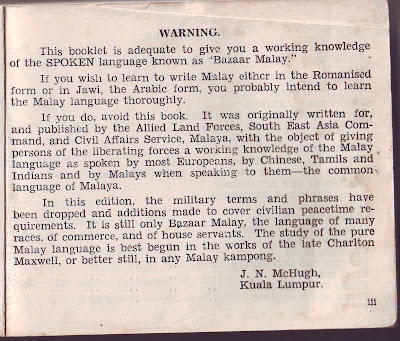 He also claimed "Bazaar Malay is a very easy language. This is a major reason for its widespread use by different races. A few simple rules only are required to speak it and to be understood by any of the Malay-speaking people peoples in Malaya, Sumatra and many parts of Java and the surrounding islands. It differs from good Malay, as spoken by Malays to each other ....avoids complicated grammatical forms and uses borrowed words."

As a result 'good Malay' became mongrelized and subverted by all because it was 'easy' and served the dubious function of Malaya's 'lingua franca'.

No one was more aware of this than Munshi Abdullah in 'Kesah Pelayaran Abdullah'. He wrote this in 1886. 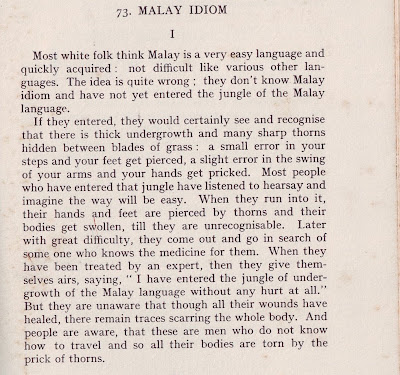 AsH and rash - they rhyme..

Shall AsH with the rash scratch your eyes out? Meow!!!!

Hahaha! Go on Ash scratch her eyes out! Hope you're feeling better soon and be ready for your trip!
Wow, all those books and dictionary still looks good, you took care of them very well! Oh yeah, Selamat menyambut Aidil Fitri
Maaf Zahir dan Batin!

Shall do that now that I have your support.
Selamat Hari Raya to you too dear girl - you know we will be just next door in NZ.

Tamil must be pretty 'cool' at that time ya !heheheh

Does that connect with Daddy Cool, Cool Cat and Cool it baby?

Your blog is inspiring. Your collections of old Malaya books are equally inspiring and intriguing. Will be great if you can blog more on your collections. Take care.