"This is a moment to seize. The kaleidoscope has been shaken. The pieces are in flux. Soon they will settle again. Before they do let us re-order this world around us."
Speech by Tony Blair when he was Prime Minister of Britain to the Labour Party Conference in October 2001 just after September 11.

The dust has not settled on the triumph of the Catholic Herald. The High Court's decision does not solve the problem. Is their decision safe or politic or popular or right? There are facts and facts and there are also interpretations. I taught my students - when I was teaching Critical Reading at USM - that one should not just look at the words but to also scrutinize the underlying concepts and assumptions. For example, in a recent report by CNN, they described Malaysia as "predominantly Muslim but multi-racial." Note the different weight in meaning when you describe Malaysia as " multi-racial but predominantly Muslim." It all depends on what you want to stress - the multiracial makeup or the 60% Muslims.
And so I ask once again - WHY? 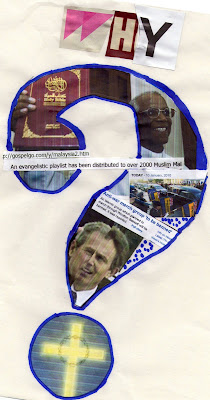 Over and over again - from Francis Fukuyama to the neo-cons in USA and Britain to the fearful Islamophobes in Europe - the War on Terror has been invoked as window dressing to keep out the 'barbarians at the gate". George W. Bush's reference to the Crusades when he embarked on the invasion of Iraq is no slip of the tongue or fault of the mind. Despite all these justifications, these nations are responsible for the deaths of hundreds of thousands of people in the Islamic nations of Iraq and Afghanistan. The victims have been labelled the perpetrators. Welcome to the New World Order of the Christian Millenium! 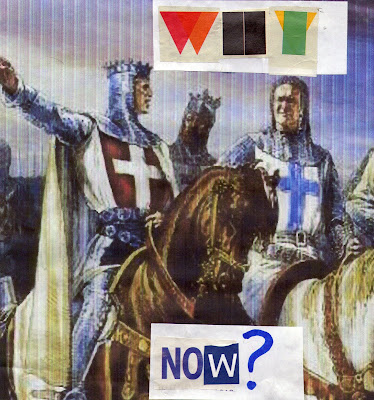 The timing is ripe and right.

And now after the triumph of the Herald, the consequences are to be expected. "I told you so." And another voice behind the curtain smiles and says "I know so!!"
Newton's First Law of Motion states: "A body remains at rest or moves in a straight line (at a constant velocity) unless acted upon by a net outside force."

Let us take a lesson from this Chinese proverb. "Now that the bird is on the shoulder, don't allow it to nest in your hair."
One day there may be an insistence on using the Arabic/Muslim 'Isa' instead of Jesus Christ? But there's already Yesus Kristus. Perhaps Luke, Matthew and John?- although it has already been indigenized to Lukas, Matius and Yohanes. Will Mother Mary sound better as Emak Mariam for these punters? And in the Lord's Prayer - will they use 'Bapa' or 'Ayah' or 'Abah' or 'Papa' for "Our Father......" Then there's the word/name 'Andrew'. Can this be 'Malayrised' or Arabized? It's a trifle difficult because it's not a biblical name - it's origin is Greek meaning "Manly".

Perhaps " multi-racial but predominantly Muslim" Malaysia should take the same road as their neighbours Indonesia and Thailand and indigenize the names of all non-Malay/Muslim citizens. After all, what's in a name???

Still, the best cherry has already been picked.