GOOSEY GOOSEY GANDER - whither shall you wander?


When the shark bites with his teeth dear,
Scarlet billows start to spread.
Fancy gloves though, wears old Macheath dear.
So there's never, never a trace of red.

WELCOME 2010!! Here we go again - the same nasty , extremist Muslims threatening our peace and security. What with the Christmas Day Nigerian bomber, the Somalian attacker of the famous Danish cartoonist and now the UK Muslims protesting against the War (ungrateful wretched Muslims all of them, biting the hand that feeds them etc. etc.), we don't need an oracle to tell us what the rest of 2010 will be like. Let's ignore the Israeli ..... no sorry, I mean IDF (Israeli Defence Force) attacks on tunnels in Gaza. As for the rising number of deaths in Pakistan, Afghanistan and Iraq - it's their own fault- they brought it upon themselves - after all our (the nice guys, the West) attempts to give them freedom and democracy.
But hey, here's a piece of good news. No, it can't be true - not from that Muslim (the indigenous majority) Malaysia.

SAUCE FOR THE GANDER
I found this posting "Malaysia's Allah" in rocky'sbru December 31 2009. 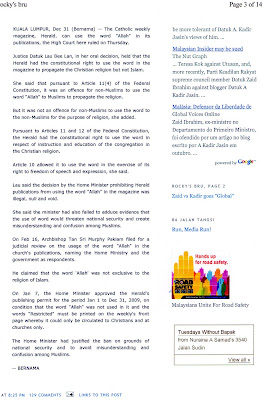 This BERNAMA report is taken from http://rockybru.com.my/. My reproduction is awful. Please click the image for a better read.


BUT THERE'S NO SAUCE FOR THE GOOSE
Check this
Read the above report from the Daily Mail - "Outrage as Islamic extremists vow to march through streets of Wootton Bassett" to learn more.
"Islam4UK - which calls itself a "platform " for extremist movement al-Muhajiroun - plans to parade through Wootton Bassett, in Wiltshire, in the coming weeks. The group's website says the event...."not in memory of the occupying and merciless British military" but of the Muslims....."murdered in the name of democracy and freedom"."

Ex-mayor of WB says, "We are a Christian country and a traditional old English market town who honour our Queen and country."

This Goose is cooked because of "significant community concern" (from tonight's Channel 4 News). We'll just have to wait and see.
Like Rocky who has been feeling under the weather, 2010 is beginning to make me sick.
Posted by anak si-hamid at Saturday, January 02, 2010

regardless of how dismal things look on the worldfront, would still like to wish you and yr hub a wonderful 2010!

My dear mekyam,
Lovely to hear from you. It does look grim but nowt can keep me down. There are still trees to be shaken.
Thanks for the greeting and the same heartfelt wishes to you and your loved ones from the two diddies.