My Rummage Case - Part 3. OUR DAVID

In this whole wide world David makes the best cuppa tea and Yorkshire pudding. Here he is with his best friend Oscar. 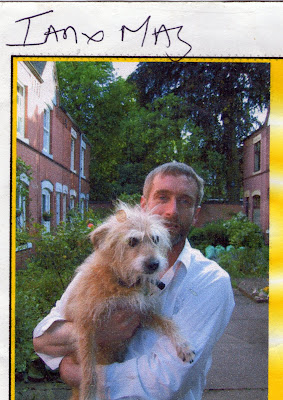 Sadly Oscar died over a year ago and we know David misses his pooch very much. Every morning Oscar would get his bowl of tea from David - we also have the same privilege - a cup of tea in bed - whenever we stayed over at his flat in London. And here is a picture of David and Oscar taking a walk in the park - specially drawn by his mate Iain. 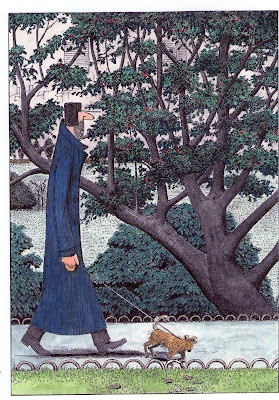 David was our best friend and neighbour when we were all living at Oxford Avenue. He was a brilliant gardener and in summer and autumn he would deck my kitchen with potatoes, runner beans, cabbage and onions from his allotment. I would reciprocate by cooking him all sorts of exotic Malaysian food like spicy roast chicken and vegetable or chicken curry. His top favourite was my vegetarian samosa. In summer when our front door was usually wide open I can expect to see him standing there, sniffing the air, putting on his sad face and yelling "Maznoor, I'm hungry!" We used to nickname him 'the bottomless pit'. Oh, those were such happy days.

David is always ready to lend a helping hand to anyone in the Avenue - almost like the Avenue's general factotum and good samaritan. Eva, our neighbour, who was born in the Avenue in 1912 simply adored him. He never failed to weed and tidy up Eva's garden every spring. David who is about 8-9 years younger than us was brought up to be an old-fashioned English gentleman. If he saw Eva or myself or any of the ladies from Oxford Avenue with a bag of shopping, he will take if off our hands and deliver it to our front door. There was a time when we were waiting for our taxi to take us to the bus station where we would get the coach to Heathrow. The taxi was late - we were in a near panic. So David picked up both our suitcases and carried it to the taxi which was about half a block away.

It was a sad day for us when David and Oscar moved to London in 2001 because of his job. Before he left he gave us his grandmother's sideboard which is now happily ensconced in our house in KL. 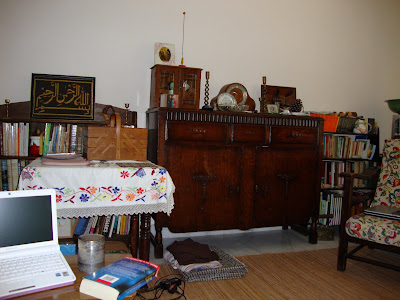 We tried to persuade David to visit us in KL but after eight years as a steward with British Airways, he had had enough of flying. We try to visit him whenever we're back here but 2009 has not been a good year for travelling to London. But we must admit we always baulk at going to the Capital - too noisy and overcrowded.
Of course it is de rigeur for me to provide 'meals on wheels' for big, hungry and appreciative David. I know - it's just cupboard love.
This is a picture of us catching up with David at the park because he wasn't at his flat. Little Oscar was desperate for his walk! 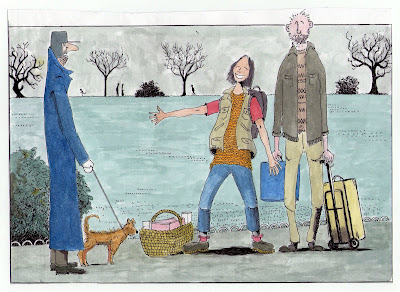 When this cold spell is over, we hope to catch up with dear old David for loads and loads of cuppas of tea. But he will never see this posting because he hates computers. Silly Boy!
I think I'll put him back into my Rummage Case.
Posted by anak si-hamid at Tuesday, January 26, 2010

I love those drawings!
Hi, I've been a reader of your blog for quite awhile. Your entries are a joy.
The drawings are amazing.

i just love the drawings and Oscar's so adorable.

jooli,
Thank you for popping in. I love writing - something I hated to do when I was in school.
The drawings are by my weird, nutty spouse. You can see how he caricatures himself as a nerd - although if he really was one he would have been chucked into the woodpile years ago.
I have recently been told by my niece Maria that her 12 year old son Ariff looks in now and then to read the 'content' and to check his vocabulary. The teacher in me feels quite chuffed!


ph,
You know dear girl - years ago, when we first got to know David, we thought of matchmaking you and David!!! You would love him.
But you were nowhere to be found.

Such fun and enjoyable writing and such accurate drawing ! Simply amazing - really !

sunnysideup,
Thank you. You are biased because the nerdy artist is your bro-in-law. I think George Rollmop is more fun.

Thank you for the thought but at that time i was busy loving someone else..

I love your entry =)

Ms Chaya,
Thank you. Glad you like it. I enjoyed writing it too.

Auntie Teech, i know your "kaypohness" was meant in a good and kind way.

Can he make creme brulee ?

I WONDER WHAT GEORGE HAS TO SAY ABOUT THIS ARTIST ! ON SECOND THOUGHT, I DON'T WANT TO KNOW CAUSE I'M AFRAID OF THE POSITIVE SUPERLATIVES HE MIGHT USE - AS HE SURELY WOULD !!!

PH: creme bulee??? go kachau Le Chef' Singapor Ruq. A great cup of tea (and served in bed too!) is not to be sneered at.

ASH: me thinks like you, Your David will be v good for Le Nonya. :)

trust all is well, luv, b