Ilyas and Emir and the Archbishop

Got a much needed ray of sunshine when Abang Long, my brother-in law, sent me this photograph of his "Cucu No. 8 and 9" on their first day at school. 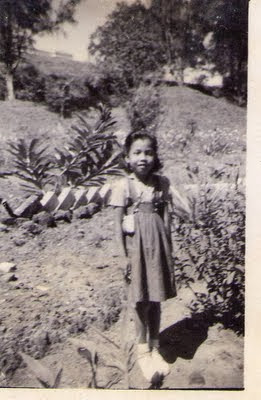 Maznah first went to St Anthony's Girls' School  (top photo) when we were living at Kampung Chantek, Dunearn Road. The family then moved to Kampung Abu Kassim at Pasir Panjang Road and she had to have a change of uniform for Pasir Panjang English School.

Though Tok Wan looked like a frightened rabbit during her first year in school, her grandsons are full of smiles and confidence.  Could it be because they are wearing long pants and not just shorts?  In the old days long trousers were only for the big boys in secondary school  (except for Jurong Secondary School, Singapore).  Little squirts in primary school were only allowed shorts!  But then little boys (and big ones) are good at hiding their fears and their mischief.  They may look like butter won't melt in  their mouths but they do have a remarkable, innate talent for driving you up the wall and round the bend.

It wasn't too long ago when they were just two little nuisances and a pain in the ears!

Thank you Bang Long (and Maria) for keeping me in the loop - and for giving me a kickstart to get on with writing.  Most of the time for the past few weeks my head had been feeling  like this spinning carousel at Leicester City Centre.

I put it down to these series of medication (not the book though) - three so far - for a geriatric blogger with a dodgy pulse rate. 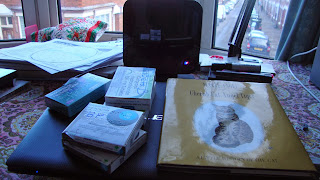 On the other hand, the fatigue and breathlessness could be due to a deficiency of sunshine, blacan and sambal pedas petai/ikan bilis?

Elyas, his old man Nadzim, his big brother Ariff, and Emir are privileged to have attended  St. John's Institution or Sekolah  Kebangsaan St. John, one of the oldest schools in Malaysia which was opened by the La Salle Brothers in 1904.  For more information, check   http://malaysiafactbook.com/St._John's_Institution,_Kuala_Lumpur

This Catholic missionary institution has developed in tandem with the country's post-Independence education policy designating  itself as Sekolah Kebangsaan St. John without the letters 'Ç' and 'T' in brackets.  In 1969 St John took pride in organising the annual English and Bahasa Malaysia public speaking competition.  "Public speaking became part of the English and Bahasa Malaysia curriculum and was compulsory for all students".  St. John maintained its Christian heritage and autonomy in management even though it has become very popular with non-Christian students and their parents - making it a multi-ethnic and multi-religious Sekolah Kebangsaan.  "Though the school land is owned by the Roman Catholic Church .....  much of the school funding is received from the Government of Malaysia".

In May 2010 it was declared a National Heritage Site by the Ministry of Culture, Arts and Heritage.  It was one of the first schools to be recognised as a Cluster School of Excellence where it was granted autonomy in   'administration and adequate funding to excel in specialised fields such as academic, sports and extra-curricular activities".  St. John can be proud of two other aspects of their CV.  They provide for visually-impaired students who attend normal classes like the other students.  They are taught by specialist teachers and given extra tuition by student-volunteers.  Also this school is blessed with generous contributions from former students and other benefactors together with a dedicated Staff and PIBG.  If only other Sekolah Kebangsaan in the country could replicate the dedication and standard  of Sekolah Kebangsaan St. John.

Like any other parents, Maria and Nadzim, Hidayah and Faiz - the parents of Ilyas and Emir respectively - wanted a school where their children could thrive and grow - in  Bahasa  Malaysia and English -  in both the academic and non-academic spheres.  Their other priority is that their children should study and grow up with other  (non-Malay) Malaysian children.  In the classroom, in the canteen, in the playing fields, their children together with others who make up the Malaysian rakyat,  will get the opportunity to work as a team, to quarrel and bicker as children do, to share and compete, to laugh and cry together and most important of all - despite their differences in skin and faith - they will  learn to respect - and not to just tolerate - one another

And so I was quite distressed when I read this in The Malaysian Insider on Christianity's most holy day.

Here's an extract with the most telling parts marked in green ...... 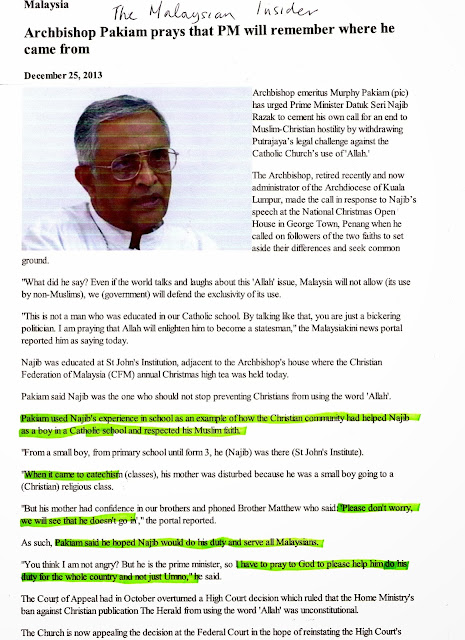 And so it came to pass that on one Christmas Day, a day for "peace on earth and goodwill to all men", Archbisop Emeritus Murphy Packiam  decreed that .......

Is this payback time because a Muslim boy studied in a Catholic school?  What about non-Muslims who live and prosper in a Malay-Muslim Semenanjung and Southeast Asia?   In fact, Catholic and Protestant/Anglican/ Methodist Missionary schools, vernacular Chinese and Tamil schools  have thrived much more than Malay schools from the time of the invasion of the Malacca Sultanate by  the Catholic Alfonso de Albuqurque in the early part of the 16th century - through Dutch and especially British Imperialism and right up to 1957.  With such generous support and handouts from the Colonial Government it is rather the  Christian Mission schools who should show gratitude to the  natives for letting the Christian white overlords to act as they please in the Semenanjung for their benefit.

What can I say?  Big deal!  For this semi-divine favour, should Tun Rahah be obliged to instruct her PM son to forego his responsibilities to the rest of the country and give  Archbishop Packiam  his perceived "pound of flesh".   It seems that the Prime Minister of Malaysia owes him ( and his cronies) a helluva debt!  Does that also include all the Malay-Muslim children, past and present, who attended Catholic and other Christian schools?

O mighty Caesar! dost thou lie so low?
Are all thy conquests, glories, triumphs, spoils
Shrunk to this little measure?     (Shakespeare : Julius Caesar , III. i. Ib.148 )

But I do believe that this school where my father's great-grandchildren will spend the next 12-15 years of their lives does not subscribe to the same ethos as the good Archbishop.

However I think we should also consider another aspect of the Malaysian Insider's title, "... that the PM will remember where he came from".  It is crucial that we must not forget to remember how we got to be Malaysians and how we got to be where we are now - and that includes Prime Ministers and Archbishops.

This song by that true-blue anak Malaysia Andre Goh,  has accompanied me (via a cassette tape) wherever I wandered away from my shores.  It kept me company when I was in Brunei, as an anak dagang mencari rezeki di negeri orang, as a student in London, Colchester and Leicester and as the spouse of Donald Iain Buchanan in Leicester.

And so for Emir and Ilyas,  one day, perhaps in the 2060s when you will reach my age, you will remember to hold dear your family and especially the two lines above.

Interesting. According to the Archbishop Emeritus, Najib "should not stop preventing Christians from using the word Állah'.

If that is so, Archbishop Emeritus, what's your problem?

A picture speaks a thousand words, but i must say, thank god , that the picture is also silent literally.

(Sometimes I wish that people do not politicise everything, or at least leave the education out of it ...)

Nevertheless, Tok Ngah and Tok Iain , you are welcome to join us in school!

Exactly!! As usual the devil (perhaps the Bish would be more familiar with that than the Malaysian Insider) is in the details.

Thank you George Rollmop for pointing that out.

Thank you Mom and Mak Uda,

Who needs a picture when you can have them live!! Help! Can you please take them back home with you?

Thank you Ilyas and Emir. Some years ago we had lunch at your school canteen - the food was nice - but the company, the noisy sweaty kids (like you two) were ...... help!!! again.

Thank you. You can always depend on Shakespeare to highlight hypocrisy and self-righteousness.

"It wasn't too long ago when they were just two little nuisances and a pain in the ears!"

Keep them locked up when we get back!

Yes it ws our hopes that when we enroll the children in St Johns and Convent Bukit Nanas that our children would be able to mix with the other races, and accept and respect others in their own childish innocent way.

Ariff was in Year 1 in 2004. There was still some sporadic numbers of chinese and indians.

Ilyas is in Year 1 this year, 10 years after. We can't find any chinese in his class , and i don't think there was any in the other class. And this morning during school assembly, to detect a chinese kid is like looking for a dinosaur now, an extinct breed!

This is bad. For our children and so on and so forth. This is a time bomb...

And St John's is a Missionary school, not some sink Sekolah Kebangsaan in some small town!

Well someone has to look into the matter to check on the Where, the Why and the How.

Salams dear,
Hope you and yours are healthy and happy.Thought you might like to have a look at this video.Cara maksalleh tarik orang guna psychology sikit-sikit, and before you know it, you are hooked. No offence against maksalleh as my other half is one too but this is their modern day crusade

Thank you for the YouTube connection. I shall look it up tomorrow - it's midnight now.

This 'crusade' has been going on for as far as I can remember. I fear our people in charge, both secular and religious have been caught napping far too often - too concerned with getting a place in heaven and /or making a heaven here on earth.