For the last ten days, the weather has been a wee bit chilly and insalubrious for a geriatric tropical flower like AsH.  I decided to do something unchallenging like tidying up the folders in My Document and My Pictures. But then the Brixton slavery case hit the headlines and when it was revealed that one of these women 'slaves' was a 69 year old Malaysian it became more interesting than reading 'Fictionalized History: Initiating Changes in the Malaysian Identitity' by Sim Chee Cheang.  And when the identity of the the Malaysian turned out to be Siti Aishah Bakar you could have knocked me down with a feather.  Here is someone the post-modernists would describe as a  'Malay-Muslim Woman Subaltern' who, for over 30 years, had lived a life in a 'Maoist' Collective in London with an agenda of subverting the  'authority and hegemony' of the existing power structure. (I do enjoy playing the post-modernist lingo!)  I am curious as to how our post-modernist critics, crypto-Marxists, liberal intellectuals and academics in the Talking Salons and Ivory Towers in Singapore and Malaysia will interpret this phenomenon.  I suppose one can expect a flood of papers, treatises, seminars  from our radicals and liberals and (male and female) feminists in the near future!

I have however  discovered two articles.  One is by Maria Begum from the Malaysia Chronicle: BIG SLAP FOR MALAYSIA : Siti Aishah REFUSES to return, STANDS by her Maoist mates. the words indicated in capital letters are the author's.   The other is  "Forgiving Siti Aishah'  by Jeswan Kaur of FMT news.  Both of them are  plying the same tired argument purveyed by  the cult-like Friends and Fans (FAF) of Lim Chin Peng - that this Malay, this member of the "Supreme Race" was not to be punished, that she is allowed to come home while the ashes of their Supreme Freedom Fighter was denied re-entry into the Peninsula's soil,  etc etc.  I think they are getting their  "knickers in a twist" -  when they chose to interpret this tragic-comical  'Singaporean-Malaysian Collective' in terms of their self-serving racial politics.

The CONTEXT - that is what I always get back to.

Anak Md Deris in her comment on my previous posting, asked me if I knew anything about Siti Aishah as we were born in 1944 and were in London at about the same time.  Actually Siti Aishah came to do her degree in London in 1968.  In that year I was into my second year of teaching at Yusof Ishak Secondary School  and I did not pursue my postgraduate studies in London University till 1974.  What we had in common other than 1944 was our  urban Malay-Muslim background.  We were both single,  English educated, and had the privilege of a tertiary education.  That was all.

London in the 1960s and 70s was awash with revolutionary student activities and activists belonging to groups of Marxists, Marxist-Leninists, Trotskyites, Stalinists,  International Socialists, International Marxist Group (of Tariq Ali)  Communists and Maoists.  This was also the time of the Civil Rights Movement in the USA.  Also the Imperialists'  involvements in the Vietnam War were at its most ferocious and bloody.( USA ended its presence in 1975).  Anti-war protests in London, organised by the young revolutionaries was particularly regular and well-attended.  However another battle of resistance by Palestinians against Israeli Occupation remained somewhat invisible, even after the 1967 Six day War.  In fact Yasser Arafat's PLO was formed in 1964.

As for Britain, the 1970s were marked by industrial strikes by coal miners in 1972 (under the Conservative Government)  and a variety of other minor strikes.  I remembered the 'bread' strike in 1975 when all the shelves in the shops were emptied of bread.  There were also frequent and unannounced strikes on the London Underground and buses.  I recalled a group of students coming to our lecture room in 1975 asking us to leave the room and join their protest.  This was at the Institute of Education, Malet Street. There were about nine of us but we ignored their call.

In comparison to university students today, British university undergrads then were living the life of Larry.  They were given very generous student grants.  They could stop and start and change  their courses as they pleased without suffering any financial penalty.  During University vacations they were well taken care of by registering for the dole.  This was a grand time to be young and radical.


My father organized for me a college in the East.
But I went to California, the sun-shine and the beach.
My parents and lecturers could never understand,
Why I gave it up for music and the free electric band.

By the late 1960s the Communist Party of Great Britain  (CPGB)  was reckoned to be  too moderate by the young revolutionaries. Mao and Mao's China was regarded as the 'model for the socialist revolution'.  The 1966 Cultural Revolution in China  gave fire and spirit to these Maoist factions.  They were mainly small groups making inroads into student movements in the late 1960s.  Many were overseas students and according to Professor Steve Rayner of Oxford University they "refused to recognize the legitimacy of the state .... and maintained a hostile attitude towards the establishment and towards the rest of the far-left in Britain at that time.  Their ideology was profoundly detached from reality."

One of these 'Maoist' leaders, Aravindan Balakhrisnan  - who was arrested with his wife Chanda for holding the three women as slaves for 30 years - was reported to be a product of Raffles Institution, Singapore's pukka English school and an undergrad in Singapore University in 1960.  Some sources reported that he came to study at SOAS (School of Oriental and African Studies), London University in the 60s. 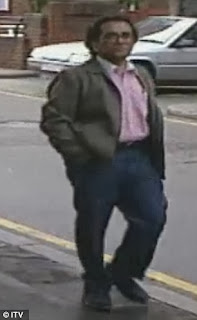 As for Siti Aishah , according to her sister, she came to Britain on a Commonwealth Scholarship to study surveying in 1968 and  was "attracted by an organisation called the Malaysian and Singaporean Students Forum which had a reputation as one of the more extremist Maoist groups operating in London."

Comrade Bala and his wife Chanda  organised many meetings and protests in the late 60s and early 70s - giving talks and distributing pamphlets in the streets and University Campuses.  Siti Aishah was so bowled over by Comrade Bala's charisma and ideology that she broke her engagement and steered her loyalty towards Chairman Ara or Comrade Bala.  She eventually moved in permanently with Comrade Bala's cell, turning her back on her family and dedicated her life to the Revolution

In 1974 Balakrishnan  broke away from the  CPGB and set up the Maoist splinter group WIMLMZT or Workers' Institute of Marxism-Leninism-Mao Zedong Thought.  On Mao's death in 1976 the group erected a Mao Tse Tung Memorial Centre at 140 Acre Lane Brixton.  In 1978 the Centre was raided by the police and as a result, some students who had overstayed their visas were deported.  In the same year, Balakrishnan's cell, together with Siti Aishah and others went 'underground'.


By the 1980s Balakrishnan's  WIMLMZT went off the screen. They were regarded as non-violent and were simply maintaining a low profile, waiting for the Great Victory.   And in some ways the Maoism of the group is irrelevant: their key features are those of a cult rather than those of a Leninist party.  ( Lurdan  writes .... 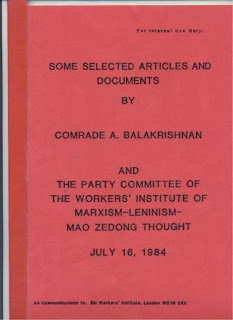 "Looking at their writings now they seem to exhibit all the indicators of a classic millenarian sect based on an apparently literal belief in the immanence of global revolution.")

It is far from unprecedented to find people attracted to an individual who promises them a way to change the world  and add meaning to their own lives.  They are then encouraged to gradually increase their commitment to the group's activities. so that eventually it monopolises their time and their thinking.  This appalling example warns us all of the need to retain our ability to think for ourselves, and never to imagine that any one person or small group has all the answers to our problems.   -  Dennis Tourish, Professor of Leadership at the School of Management, Royal Holloway, University of London.

Oh my god...thanks so much Kak AsH for writing about this. So interesting... please write more... I am eagerly waiting for the next episode...
I keep thinking, way back in the 60s or 70s, not many people in Malaya/Malaysia had the opportunity to go to University. What more a woman, and to London some more.
This Aishah fellow must be really creme de la creme.
How this super bright girl can be "conned" into the "cult" and remained loyal even after 30 years on self-made subversive confinement, really beats me.
How does she supports herself all these years? Dont tell me she receives the social welfare/food stamps from the very same master she determinely wants to destroy? What an irony.
Please quickly write more...its burning inside me...:)

Thank you Mdm. Very interesting. Full of facts I never knew before. None of the newspapers here had such details as you hv written. Superb journalism!

UMNO Media should consider AsH working with that "lifestyle" chap..as an advisor.

Looking for more postings from a superb writer.

Thank you. As you can see I got caught up with another posting.

It's fascinating how the mind, even a 'brilliant'one can be easily brainwashed.

There is always a lot more to the news than meets the eye.

Glad you found the posting useful.

I'm flattered by your confidence in me. But I always keep away from political parties and political ideology. They're not my cup of tea.

And thank you for the compliment. Actually a lot of people can write, and as for the Malays - like I wrote in my posting in Atap Genting, Atap Rumbia - they have to buckle down to defending their 'maruah', in English.