Three days ago I discovered more old books in the back-shed.  I think this house has to be fumigated - against all sorts of ancient things, including the two inhabitants.

This is the piece de resistance  : 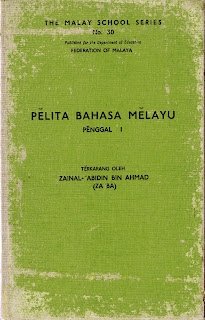 It's a cloth bound PELITA BAHASA MELAYU by Za'ba from 1954 - though it's damaged from weathering and from being munched by moths and silver fish.  I love it for the "e-tanda" script, and for the last paragraph of the Introduction. 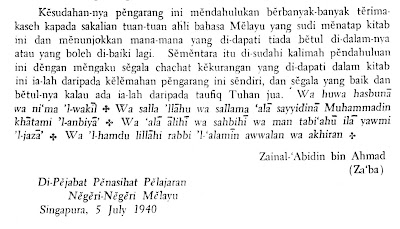 This illustrates so well the humility of the man and the scholar - and especially the gracefulness of his expression. 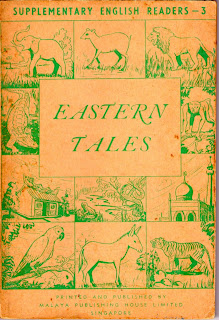 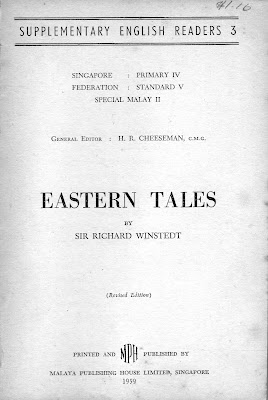 White Bird! White Bird!  Why are you so thin?
Of course I am thin.  For the fish won't rise.
Fish! Fish! Why won't you rise?
How can I rise when the grass on the bank is so long?
Grass! Grass!  Why are you so long?
Of course I am long.  For the cows won't eat me.
Cow! Cow!  Eat the grass!
How can i eat it, when my stomach aches?
Stomach! Stomach!  Why do you ache?
Because the rice is not cooked.
Rice! Rice! Why aren't you cooked?
Because the wood for the fire is wet.
Fire-wood! Fire-wood!  Why are you wet?
I am wet because of the rain.
Rain! Rain!  Why do you wet the wood for the fire?
Of course I wet it, when frog calls for me.
Frog! Frog!  Why do you call for the rain?
Because a snake wants to eat me.
Snake! Snake!  Why do you want to eat poor frog?
Because he is my proper food.


This was Winstedt's translation of the original Malay poem for children that we all treasure and love. 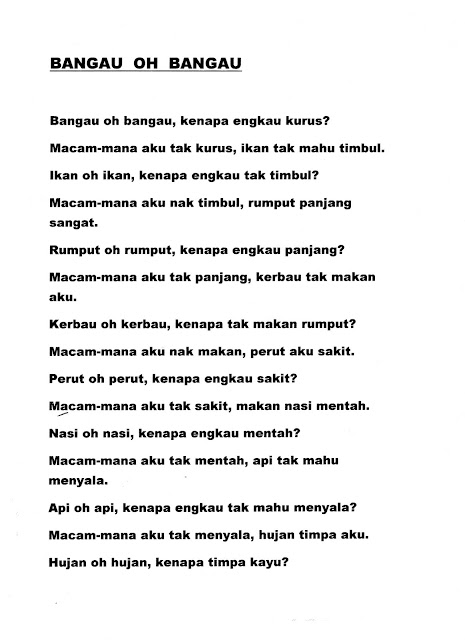 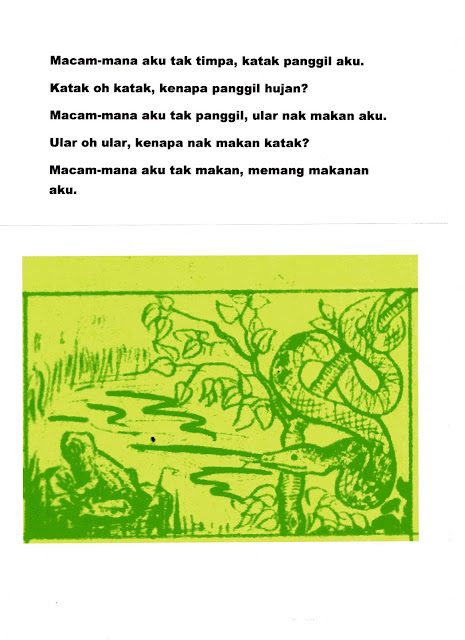 It's a catchy, lively poem and song with a distinct galloping rhythm.  The words are simple and the familiar and homely imagery are of a riverside world, of farmers and fishermen.

It is made for dramatisation and allows for a large cast of participants - ideal for a classroom.  If only we could know who the writer is.  But this is typical of our traditional Malay poets, pantun writers and composers of   "lagu lagu Melayu Asli" .  Their names and fame were inconsequential to them.  Ownership, patents and copyrights were not part of their world.

But as in most traditional songs and poems, there is always a moral and a lesson tucked away in the lines.  We can simply absorb them as a happy ditty or discover important depths and meaning in the allegory. At one level this song could be about the food chain and the cycle of  life.  At its most basic it could refer to the food chain in a grassland environment where the animals at the top rarely become a meal for any other animal.  For example, humans, eagles and lions belong to this category. Below them are the snakes and they gobble up the mice.  Mice are at the bottom and they consume the plants and grains.  These last are considered as the producers because they make their own food by photosynthesis.

But I somehow don't think the writer of this song had such a structure in mind  -  about a natural order of consumption and survival.

At every level, our animal cast of characters are in the mess they are in because they are passing on the buck about their dilemma and inaction.  The Bangau blames the Fish, the Fish reproaches the Grass, the Grass puts the onus on the Kerbau who then points the finger (or rather the hoof) at a component of himself - his Stomach!  Don't look at me says the Stomach - what do you expect if you stuff me with uncooked Rice?  Naturally a weak flame will not make the Rice edible but the Firewood was drenched by the Rain which was called upon by the Frog.  It's a long chain of blame, shifting culpability, copping out, victimhood and even cowardice.

It all boils down to the Frog who turns to the rain because he dare not, or lacks the will to confront his adversary and opposition - the Snake.

And in the end the last and happiest actor in this drama is the Snake who arrogantly declares, "Why question me for scaring and eating the frog?  It is my right - frogs mean food!"

It is only the arrogance of power.  And it is an attitude we humans excel in.  Think of the plight of Palestine!  Think of what happened to the vastness of Africa, the spaces of the Americas and Australia, India, and the promises of  bountiful trade in the Malay Archipelago.  The powerful said, "They needed us - the Judaeo-Christian Order - to develop them.  It's their fault for rolling over and letting us walk all over them.  After all, we are the superior caste of humans, we come from the top of the food chain with our religion, weapons, money and culture!"

I think the person who wrote this ditty of the Bangau could prophesy the present lament of the Malays.  They have been too self-serving, too lackadaisical, irresponsible and there is no sense of accountability in the powerful and privileged.  Too many are and have been sucked into a somnolent torpor now that the belly and the pockets are plump.

To reverse this apathy and to recover his dignity, the Bangau has to move to another river to catch his fish but he should also be accountable to the other birds and wildlife that inhabit that river.  The Frog has to take more responsibility to search for and fulfil his need for water - like getting his mates together to dig a well, or wells under the Jambu tree.  As for the Kerbau  he should be more disciplined about not wasting food, be sensible about his diet and cutting back on sugar, fatty food and fast food.

It will not be easy -  but it's better than just creating a song and dance about the Bangau's woes.  Bangau Oh Bangau may be seen as a delightful children's song but there is a lot to learn from our unknown muse.

This video is closest to my memory of Bangau oh Bangau  -  no Disney-like animation and razzmatazz!

Glad to find like minded people. Finally someone else likes whats underneath the surface of 'O Bangau'.
Wrote a play on it and some thought it too flippant to have such serious innunendos.

How wonderful to find a kindred spirit Good for you for attempting to do something about your belief!

But do not despair. There will always be many, too many I fear who do not want their complacency challenged and happy to remain like the bangau and the frog.

You keep on being the eagle. And by the way, there are far fewer eagles than snakes in the animal kingdom.

Assalamualaikum! My name is Mahariz and I currently run the Facebook page for Taman Tun Dr Ismail in KL. At the moment, we are trying to do a lil' photo album of sorts of the tokoh2 negara including Zaaba, and the photo of the green book (Pelita Bahasa Melayu) would be a perfect addition. If I can have your kind permission to use the image, I would be most grateful. You will be credited as the owner of the photo of course!

Of course you can use the image of Zaaba's book and for such a good use.

And thank you for asking.