Two days ago, Jailani made a weekend trip from Singapore for a Hari Raya visit to  'recharge and rejuvenate' himself, so he wrote.  But it had the same impact on Darby and Joan as well.

We took him for a spin around the kampung at Paya Jaras Hilir, Sungai Buloh and he had this to say.

On the whole, it was a short but meaningful trip. The visit to the Sungai Buloh kampong was a throw back to the days of living and growing up in 'Pasir Panjang batu enam tiga suku ' - the difference is I am now the on looker, the outsider looking at the kampong dwellers from the eyes of a Singapore Malay urbanite,  a far, far cry from the innocent child, who was clueless that one day his very own kampong life will eventually be taken away from him. So I too wonder how much longer can the kampong folks  at Sungai Buloh withstand the pressure of city life that is fast knocking on their doors.

Singapore Malays of my and Jai's generation still recall the poignant joy of  kampung life in PPS  (Pre-PAP  Singapore).   Chinatown is still standing and thriving.  Serangoon Road or Little India survives to tell many a tale.  Kampung Melayu and other Malay settlements on the East Coast and West Coast have  been obliterated  ( like Kampung Fatimah) or tarted into high-rise HDB flats and farcical 'theme parks'.  Although there's nothing new in this 'cleansing' - the British in the 1820s shunted the Malay settlers along the Singapore River to Telok Blangah - the PAP more or less knocked  the nails into the coffin.

But of course we still have the pretty  pictures to remind Singaporeans of 'the way we were'  in their Heritage Industry - like looking at extinct dodos and dinosaurs.  Here are some of these pictures.  They are taken from the Jurong Town Council Calendar and not from an expensive Heritage Coffee-Table Book. 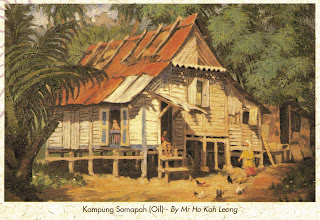 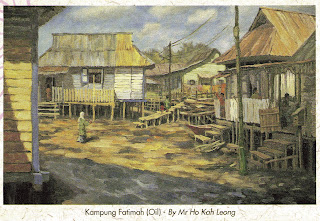 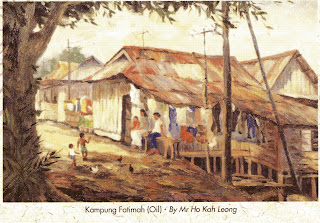 The artist Mr Ho Kah Leong was the MP for Boon Lay in the 1970s/1980s.  Kampung Fatimah has been transmogrified into the ramparts of Fortress Singapore at Woodlands.  My dad used to take us fishing at Kampung Fatimah!

Jai used to live at Pasir Panjang 6 and 3/4 ms while we had our roots at the 5 and 1/4 ms.  Just think of this Jai, you were just a twinkle in your dad's eye when I was taking my School Certificate Examination. You have caught up with us in Boon Lay, Penang, Leicester and Kuala Lumpur.  And it has been a privilege to watch you grow and mature into the kind of person that any parent or teacher can be proud of.  (See posting 8 November 2010 http://anaksihamid.blogspot.com/2010/11/jailani-abu-bakar.html)

Come back soon (to where ever we are) to share our thoughts about the possessed and dispossessed over mugs of Iain's teh tarik and my chocolate cake.
Posted by anak si-hamid at Tuesday, September 06, 2011

This posting brought tears to my eyes. The way we were.

And Singapore's history starts with Raffles? [I stand corrected on this one]

May I have permission to reproduce this posting on my blog, please? [With link and credits of course].

Jai looked very bright and handsome in the old photo.

And Salam Hari Raya to you too.

Of course you can use this blog. I am myself touched that you can feel the grief in my post.

Indeed the PAP and Eurocentric historians all say it was Raffles 'wot did it'!

It suits the agenda of the West and the racial politics of the PAP.

Look ph, I'll send you the recipe so you don not have to come here for chocolate cake.

Uncle would be so pleased!!

Nice pictures/paintings you have there.. Oh you are in Paya Jaras!

Oh yes, my paternal grandfather had his house at Paya Jaras. I keep on going back to try to locate the house.

But alas!!! The modern world has demolished the old.