This being Dhul-Hijjah, the month of Hajj,  I would like to narrate the story of a man who went on the Hajj last year.

Jailani was introduced to us by Yuwrajh (posting of 21 March 2010) some time around  1990.  Whenever we came back to Singapore Jai would visit us in the Boon Lay flat.  From after Isyak to 1am we would spend  all that time talking and discussing local and world politics, the Malays in Singapore,  the Palestinians and Salman Rushdie too!  It took some time before we three could find a way to negotiate our differences about most issues.  Jai was young, bright, idealistic and hopeful.  We were just two jaded and cynical ex-academics.  But we managed to find a common ground and developed a deep respect and affection for one another.

Jai read a lot and read widely.  His sharp and analytical mind and his flair for writing impressed us very much.  He worked himself to the bone  because he believed in the tenets of his profession.  For a young man, he  practised what is now a forgotten principle, a  work ethic - that one should give of  one's best  so as to deserve a  blessed  rezeki .  We would go as far as to describe him as a perfectionist who could not tolerate mediocrity in his work and his endeavours.  But he had the utmost patience in dealing with his students.

We knew how stifling and depressing a teaching institution can be for someone like Jai.  After much persuasion he enrolled in Glasgow University School of Media Studies in 1994.  In Singapore, if you want to go overseas to further your studies you have to pay your own way and beg and borrow  if necessary to secure your own funding.  Despite that obstacle, with the help of his mother who was a firm believer in the power of education,  Jai completed his Masters degree in 1995.

Jai was not born with a silver or even a plastic spoon in his mouth.  From his early schooldays  he helped his mother to supplement the family income  by selling  Malay kuih  which she had made, to workers at the  building sites of  Jurong Industrial Estate which - in the late 60s and 70s - were  just starting to be developed.  At night he often studied under the street lamps in Boon Lay Housing Estate and when the library at the Community Centre was opened he found a more congenial  place to study for his 'O' and 'A' Levels.

He is a Singapore Malay through and through, belonging to Singapore's First People - perhaps even from the line of the inhabitants of   "Pu Luo-Chung"  or Pulau Ujung.  Jai cannot claim any relatives from Malacca or Johor or Java or Bawean or Sumatra.

His maternal and paternal grandparents and their predecessors were from the Southern Islands of Singapore.  Today all these islanders or Orang Pulau  have been moved or evicted(?) into high-rise flats on the mainland.  Perhaps an example of the Little Diaspora?  When I started teaching in 1967, most of my students were from these islands. Read http://anaksihamid.blogspot.com/2008/12/my-lovely-island-kids-shame-about.html
Also Read http://anaksihamid.blogspot.com/2008/11/how-we-laughed-away-hours.html

In the years after Glasgow, Jai  kept faith with himself and his causes.  He remains the pillar of his family and they could not have asked for a better son, brother and uncle.  His generosity  stretches beyond his kin to the needy - humans or birds and animals wherever he sees them - in Singapore or Malaysia or Indonesia,

Last year Jai went on his pilgrimage to Mecca..  Because of what he saw during his Umrah  three years ago, he took a risk and decided  to include a bag of dried cat food in his luggage when he went on  the Hajj. 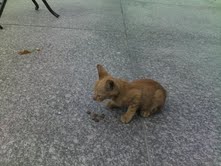 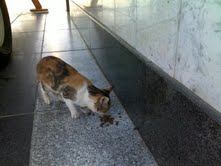 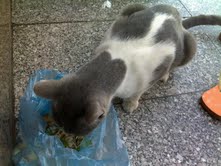 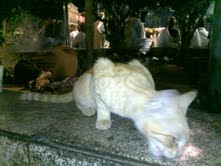 Seen above are the recipients of  his kindness.

.
To  ignorant mortals like us,  Jai's pilgrimage is so complete.  He had woven together his practice of Islam  with  his compassion for Allah's creatures - for the stray cats in Mecca. 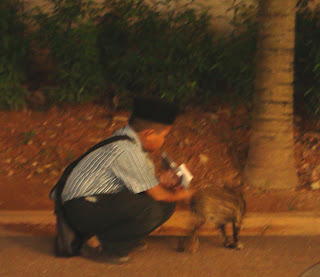 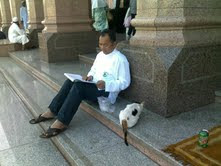 Bless you Jai for being you and revitalising our hope in human nature.
Posted by anak si-hamid at Monday, November 08, 2010

you brought me to tears...


My guess is that Jai was brought up by a caring n wise mother.The people around him showered him with lots of love,good character n morality.

Thank you for sharing.

This is a wonderful posting, especially about Jai and the cats in Mecca.

Deeply touched by this story. Wish we could have more Jais around, then all the stray cats would never ever have to go hungry. I have great admiration for people who sincerely love animals, strays in particular.

Salam and thank you wawa,

Indeed Jai's mother is a very strong-willed and determined lady.

She made sure her son became a 'cikgu' and a cikgu in an English school.

The hand that rocks the cradle rules the world.

Sometimes or rather most of the time, society picks and elevates very unsatisfactory heroes and heroines.

We need more of the giving kind who care for both man and beast.

Thank you for your thoughts.

Yes ph. That's what you and Jai and Rukh and Roy and Irene have in common.

A love and practical compassion for God's creatures.

A good man is hard to come by nowadays. They just don't 'make' them like they used to...

Too true. Too true.

Puan, thank you for sharing the story of Jai. I love it!

I'm glad you liked the posting. We do need stories of good kind people now and then - in a world rife with selfishness and self-righteousness.

I can’t thank you enough for the story of myself that is so beautifully narrated. We all have so many milestones in our life; one of the most meaningful moments in my life has to be the meeting I had with you at the Boon Lay flat sometime in 1990. Since then, my world view has never been the same. You’ve opened up my perspectives of life beyond my expectations, armed me with knowledge that no textbooks can provide and most importantly, give me love and affection only very special friends are capable of.

I hope and pray that the little boy in the posting will one day have the good fortune of meeting someone or some people who can teach, guide and love him the way both of you have done for me. It’s important to have good mentors, the voices of inspiration that give us the guidance and assurance as we struggle through with many hurdles in life.

Be rest assured that you’re always in my doa.

You have always been kind and gracious.

Iain and I thank you.

See you soon - for mee rebus and lontong.

This piece brought tears to my eyes. My twin sister used to have a tupperware full of cat food in her car and she would feed any strays that crossed her path. Out of those strays, I have adopted three. People say "kucing akan berzikir kalau kita sedekah makanan". I hope so. My twin passed away on 7/11/2010. Al-Fatihah.

Thank you. It saddens me to hear of your loss.
I also lost my youngest brother - gone too soon, years ago. He too loved our cats Suzie and Kookie.

I am sure your late twin has found some peace together with her grateful cats.

Time will heal, somewhat. But do transfer your love to some deserving animals -they will give you much comfort.

Al Fatihah for your dear sister.

Dear AsH,
It's a blessing to have met you and continue to learn so much from your experiences.
Jai's story is inspirational.
Like Jai said,
"It’s important to have good mentors, the voices of inspiration that give us the guidance and assurance as we struggle through with many hurdles in life."
I pray that my children especially would find good mentors too.