Post-election times are always confusing.     But this post-GE 14 era has been especially chaotic.  It's had more than its fair share of drama, deceit, intrigue, opportunism, spite, self-delusion, conspiracy, malfeasance, and egregious egotism.  Enough nouns, I think, to explain why this country had to have three Prime Ministers in the span of three years!

When we write the history of Malaysia during this period, the main  reference point will not be the short premiership of PM so-and-so - compared to other so-and-sos who achieved 5 years, 10 years or 22 years.   It will be why were there three PMs in three years?

Just how did we get this many and this far?

The transition from 7th to 8th PM was initiated by the resignation of the 7th PM.     But the shift from 8th to 9th is a different cup of tea entirely.   It's a real Shakespearean tragi-comedy.     Just consider the facts.    The 8th PM's term of office was utterly unique.    And it was utterly unique for two reasons above all.    Firstly, its entire span coincided with the worst pandemic, the worst health emergency, that this country has ever seen (indeed, it's been one of the worst in global history).   Secondly, while the administration (including the Civil Service) were working flat out to uphold the balance between Life and Livelihood ( perhaps the 7th PM  could have  done better?) - the entire Parliamentary Opposition and their enthralled promoters were looking in the opposite direction.      They were set almost completely on shuffling the chairs - on "regime change".    Why?   Because No 8 had upset their apple cart by moving into the slot left wide open by the departure of No. 7.

So the campaign for the "Return of the Rakyat's Mandate" was set in  motion.   What followed was a time-wasting parade of tantalising manoeuvres and slick silly slogans like "we have the numbers", and self-righteous grumbles that the Emergency was only there to keep a desperate teetering backdoor government in power (with the connivance, of course, of YDP Agong - according to the closet and card-carrying Malaysian Republicans).  Then came the "Failed Government" or Kerajaan Gagal  offensive, inspired by the stigma of  "Failed State"thrown at Malaysia by Bloomberg's favourite Ozzie Daniel Moss, and  (not to be outdone) Al Jazeera's characterisation of Malaysia's Covid 19 performance as a "Mini India".

In the midst of all this came the Indian (or "Delta") Variant.     Don't talk about India - even the most "democratic" and most "highly developed" western nations could not keep the Indian Delta Variant at bay.

The long-suffering Rakyat watched this Punch and Judy Show going on and wondered "is this democracy"?  The numbers afflicted and dying and dead  because of Covd 19 kept on rising.  So while the Rakyat 'burned', the Neros in our political circus 'fiddled' with  personal ambition and dubious numbers.   Once again, the nation was on the brink of  disaster due to the working wonders of democracy.

But then suddenly there was light.    The 8th PM, acting according to the Constitution, submitted his resignation.   So did the entire Cabinet.    At last - and for the only time in this mess of silly shenanigans - I could feel proud of my country, proud that we had the political confidence and principles to act like a proper Parliamentary democracy.     And remember, children, when you read your history books: this is the nation condemned by liberals (local, imported and international) as being  dominated by extremist, racist Muslim Malays.  What say Daniel Moss/Bloomberg and Al Jazeera?

Teras terunjam, gubal melayang - the core of the tree is fixed deep in the ground, but the sapwood is blown away.

On Friday last week the Rakyat waited with bated breath for the new  9th PM of Malaysia.  What was new??

Kera lotong terlalu makan, tupai di julai timpa perasan. When the monkeys eat too much, the squirrels on the lower branches have to suffer for it - Covid 19 or no Covid 19.

1. It resulted in the return of UMNO which the unholy allianceof Mahathir, Anwar/Keadilan and DAP  fought tooth and nail to overthrow in May 2018.  Indeed they succeeded.  They had a "good run" and they savoured the  sweetness of power. But then they botched it in February 2020.

They tried it again in August 2021.  When the 8th PM offered an olive branch of  a unity government and reforms (the ones they'd demanded) it was rejected outright because they could smell the  blood of victory wafting into their camp.  This was to be Anwar's/ Keadilan's and DAP's coup de grace.

2.  The Republicans now look to the Monarchy in the hope that the latter can be used to fit their agenda.   The liberals in Keadilan, DAP, Amanah and Pejuang - and other Pakatan Harapan's comrades in East Malaysia, as well as those outside the fold of the political parties - were not sweet on the Monarchy.  They would like to have it shackled or abolished altogether.

So I was quite bemused when I read this. 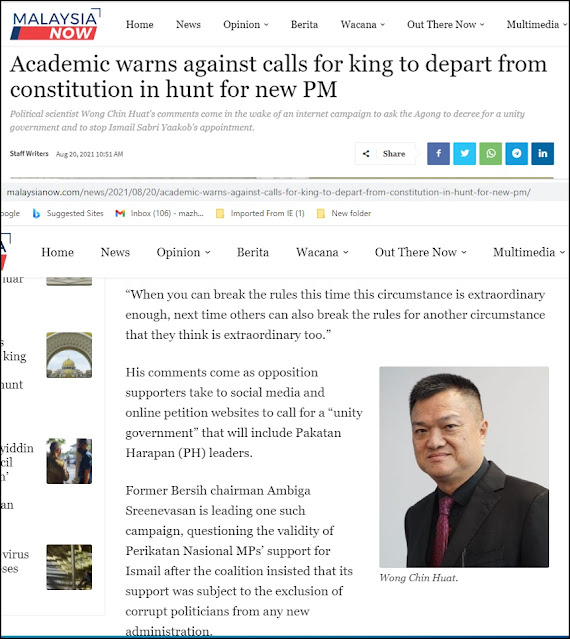 Politicians in Malaysia  are veterans of the art of "sauce for the goose is not for the gander" - of hypocrisy and self-righteousness.

More so when I looked at the comment by Kadir Jasin.   Oh, how they give themselves away, that bevy of self-regarding acolytes that cling to the coat-tails of each and every political leader/party.

Furthermore, do we, can we  - looking at the gross inequality, injustice and inconsistencies around us, here in Malaysia or everywhere else - believe that people reap what they sow?

As for the reapers and sowers I believe Pakatan Harapan and their allies take the cake when the post of Premiership and a glorious comeback evaded them once again.   Failed Opposition!  Pembangkang Gagal!

Iznogoud (created by Goscinny and Tabary) is one of my very favourite comic-book characters.  He has an indefatigable spirit in pursuing his lifelong ambition to be "Caliph instead of the Caliph". 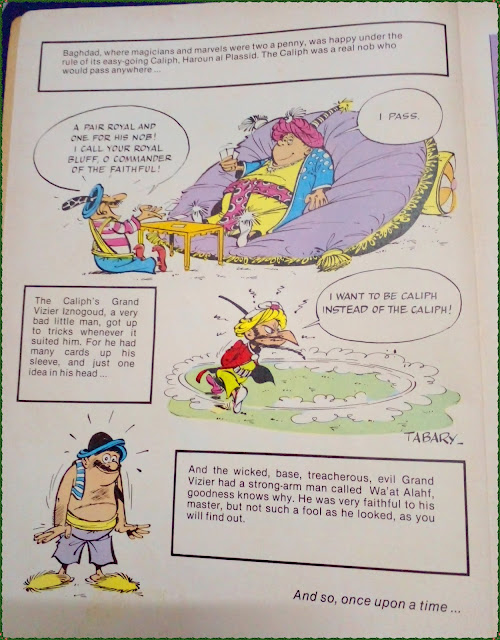 Malaysia has more than its share of "Iznogouds".        Think of the shenanigans over the past few years.  Now think of the latest grumbling from the East Malaysian state of Sabah. 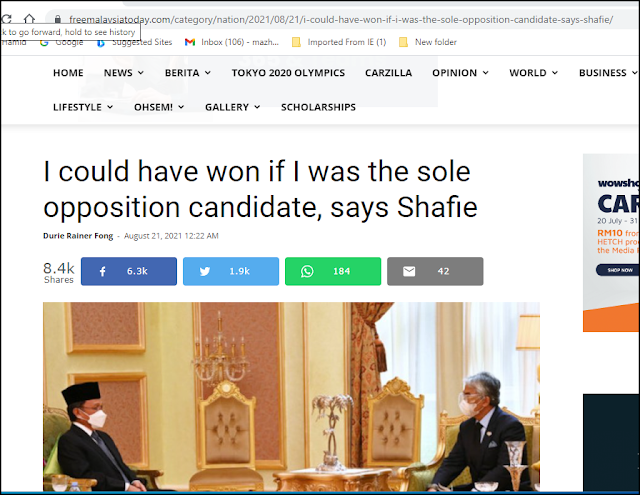 Which reminds me of the occasion of the launching of The Vibes on 20 September 2020 at Kota Kinabalu when their Sponsor expressed that lofty sentiment that "Malaya [ so glad to be called by our own name instead of that nondescript West Malaysia, Peninsular Malaysia ] has an infection and Sabah and Sarawak has the antibiotic we desperately need. .....  The thing about Sabah is that it's not judgemental."

By the way the global Medical Establishment have been warning us about antibiotic resistance - it fails to work if we overuse it.

This is the third time I read this post. Write more frequent, please.

It feels MalaySian to read balanced opinion. I am not sure what happens to Kadir Jasin and Ahiruddin Atan. I don't enjoy reading them anymore. But I think Malaysia has had an overdose of antibiotic for sometime. Maybe only vaccine will work this time hehe.

I have thought that Muhyiddin Yassin did a fair job with the handling of this pandemic and the agony it brings and I don't believe his kerajaan has gagal. It was the sifat dendam dan iri hati orang Melayu that brought him down.

I heartily agree with your views in Parag. 2 but especially with Parag. 3.

As for dendam and iri hati, these are classic signifiers of our Malays and Ivan Illich's quote rings true for the plight of our Tanah Pusaka.