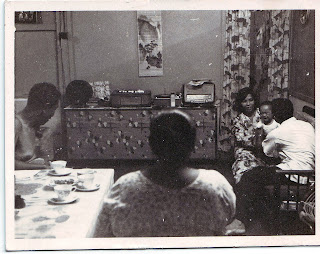 This is the sitting room of 691, Pasir Panjang Road. On the right is my sister and brother-in-law with their first born. My mak has her back to the camera and my abah is to the left.

In the background can be seen (from left to right) the humungous Philips taperecorder, the Garrard record player and the Erres transitor radio. Absolute State of the Art.

And in the old days, during the 60s, we used to serve drinks in cups and saucers. Not just sloppy mugs.

As for the calendar, it's what we get for free from Kedai Hoe Huat, our kedai runcit (grocery shop).

As for that settee (on the right), I still have it right here , where I have my afternoon kip, as pensioners need to do so that they can learn to do more scams, ooops, scans.

Bonjour ma petite, (you know my French is almost zilch, just a few kind words. Monsieur can do a better job).

Caroline and I used to work in the same factory in Leicester and this young girl and this elderly lady have shared many happy hours and many not-so -happy times. But we became good friends and have been so for the last 3-4 years even after I stopped working and Caroline moved on to several other jobs.
She came many times to our house for lunch (and you do love my tomato soup and sardine pastry don't you?) Every time she comes over , Caroline asks for permission to smoke and we will open the kitchen door and she will have her rolled up cig in the backyard. Each time we also nag her to quit smoking and we do know she tries tres, tres hard.

Caroline has become our 'anak angkat' (adopted child). And she's a bright young woman who had to stop her baccalaureate because of illness. But she's a brave and beautiful child!!!

Caroline, in your e-mail you sound hurt by life's experience and you "wonder what love is." I worry that you may give up on love - please don't -because you have so much in you that's sweet and wonderful.

So, I thought I'd send you this song on my blog. Sorry it's in Engleesh, knowing how you feel about them. But it's a lovely OLD song (1934) like Maizie and Monsieur. So, I have included the lyrics.

Love is the sweetest thing
What else on earth could ever bring?
Such happiness to everything
As Love's old story.

Love is the strangest thing
No song of birds upon the wing
Shall in our hearts more sweetly sing
Than Love's old story.

Whatever hearts may desire
Whatever life may send
This is the tale that never will tire
This is the song without end.

Love is the strongest thing
The oldest, yet the latest thing.
I only hope that fate may bring.
Love's story to you.

A tout a l'heure

How We Laughed Away The Hours (CsH)


I spent the last 6 days in Singapore with my nieces, Mariam and Hannah and stayed as usual with Jai, a friend of my former student and who has been for the last 20 or so years a warm and dear companion to me and my spouse. Jai and his family are what I would describe as the indigenous Malays of Singapore. They were from the Southern Islands , a mini archipelago of small islands located to the south-east of Singapore. They consist of Pulau Merlimau, Pulau Seraya, Pulau Ayer Merbau, Pulau Bakau, Pulau Sakra, Pulau Ayer Chawan and Pulau Pesek. Don't even try to look for them on the map because they have been "integrated' into Jurong Island after being used for target practice by the SAF for years.

When I started teaching in 1967, I was made the form teacher and teacher of the lower forms in Yusof Ishak Secondary School even though as a graduate teacher I should be teaching the upper forms. The senior (in age ) teachers decided for their own reasons to keep me in the lower rungs .If I had been a 'bin' instead of a 'binte'it would have been a different scenario.

But I was grateful that I had the chance to teach and take pastoral care of these youngsters who came from the Southern Islands. They would leave their island kampung as early as 5 in the morning to take the sampan to Jardine Steps and then an almost an hour's journey by bus to get to school. It took me some time to realise why they sometimes turned up late for school, or why after about an hour of lessons, they looked sleepy and found it difficult to concentrate. One day, I ticked off one of the boys for failing to submit his Mathematics exercise book. Being the usual tyrant teacher (you can ask Rocky) I came down hard on him and had the poor soul in tears. Then one of his friends intervened and said "Cikgu, buku dia jatoh dalam laut - angin kuat , sampan dekat-dekat tebalek" (Teacher, his books fell into the sea because the sea was rough and the sampan almost capsized ). On hearing that, I wished the earth would open and swallow me up. From that day on I learned to listen and learn from them. I became their bouncer to protect them from the Teacher in charge of the Prefects because they were constantly harassed for arriving late to school, for not tucking in their shirts/blouses, for skirts/shorts that were not of the same hue as the standard school colours. I made a number of enemies for 'looking' out for them. With another sympathetic teacher, Che'gu Ayesha Bevee ,we did out darndest to get them to survive the system, but they were too poor, too unmotivated and too tired however much they tried. Some teachers get apples from their students but I take pride in being given a leafy -looking orange coral by one of my boys. They are all natural divers!. When I tire of teaching such tired minds and bodies; I visualise them moving gracefully in the blue waters surrounding their islands, free and beautiful spirits. They don't deserve to be trapped in the classroom. Of all the minds I have taught, my island kids have a special place in my heart.

That brings me back to Jai, the kampung boy from Tanjung Keling who used to study under the street lights of his housing estate . Today he teaches media studies at various colleges in Singapore after a self-financed Masters Degree from Glasgow University. Mariam said "If Uncle Jai had been a Malaysian, he would be a Professor by now." Never mind Jai, what you are doing in your home patch is just as honourable as a title in a University. You do not need the window dressing to be appreciated.

Going back to Singapore is like visiting a house that is bereft of its garden, it's furniture, curtains, and clutter - all the paraphernalia that makes up a home. This time I also learned about the death of Mansor Sukaimi, just a year older than me. We were all kids from Pasir Panjang Road, we all knew one another even though we were in different schools. Mansor was a high flyer, good-looking, a sportsman and brainy too. I think half of all the girls at Pasir Panjang - Malays, Chinese and Indians and Eurasians were in love with him. But at that time my heart was set on the Eurasian boy who took the same bus as me from Telok Blangah Road. Alas it was love from afar, and we could not find the courage to speak to each other. But he always made sure he sat in the seat just behind me or if the bus is crowded, he would stand next to my seat . Young love sighh !!

Mansor paid a price for being outspoken as an MP but he made good despite his problems. People from Pasir Panjang are tough and as youngsters would say today, cool and brill. My condolences to Zaiton and his family. The Pasir Panjang we grew up in doesn't exist anymore. It has become a road for container godowns, the sea has disappeared, the hills are occupied.

But the dreams we had are still the same.


And Mary Hopkins' "Those were the days, my friend" begins to sound like an epitaph.


Just thought I'd post this song ; mainly to make people green with envy, because I have a similar record player that plays 78s, 45s and 33s. I also have a collection of Malay, English and Hindi records or vinyls. And my family thinks we're both a couple of fruit cakes that live in the past.

It's been a long hiatus. Am now back in KL leaving behind a beautiful, golden autumn - leaves drifting to the ground in Victoria Park but not enough as yet for leaves-scrunching walks. I do miss the seasons even though it's not as cold as it used to be. The cycle of spring, summer, autumn and winter not only gives a regularity to your life pattern but it allows you to move from expectations to hopes. In the depth of a cold winter when your nose, albeit a flat one, freezes; when the bed is cold for the first half hour and your frozen feet make your spouse yell when you accidentally or sometimes wickedly kick his legs ; you cannot wait for spring. When spring comes, your heart sings with the freshness and the colours and the cheery light. The first flower you look for is the snowdrop. My late neighbour Eva had them in her front garden and I wait in eagerness for it to bloom each year. I think of the 'baby' snowdrop in the frozen ground and how it knows just when to rear its head upwards to tell the world there's hope, for spring is just round the corner. When Shah, my brother's boy, was just a little toddler living in Hull where his dad was studying, it was the sight of the snowdrop that helped him to recover from his asthma. When he started kindergarten, he would get home late because he had been picking wild spring flowers for his mum, like the daisies and buttercups. Years later, when he was 17/18 ??, he came to stay with us for his Easter break from University and he could still remember the crocus, daffodils, pansies, violets and many others. Childhood memories and knowledge; you never lose them.

But here in KL, the achingly-beautiful call of the azan brings a similar sense of hope and peace. We have been having so much rain lately, lovely and loud and brave !!. The lightning especially, cuts a line across the sky and we just love to sit and and stare, but sometimes we feel guilty when we think of the motorcyclists and pedestrians who have to travel in that heavy downpour.

Our stay this time is also for undertaking disconcerting family duties. The graves of my father and brother in Singapore are now going through the process of exhumation. They will be reburied with several others in a smaller plot. It has to be done because there isn't enough space for burial gardens in Singapore. But we will so miss the visits to each plot where the little shrubs that my late mother planted have kept going for all these years. How fortunate are the people of Malaysia, where graves , including the larger plots for non-Muslims are left untouched.

It's good to be back in my neck of the woods, but I do miss my other home . And I do feel lost "between two shores".
Posted by anak si-hamid at Sunday, November 09, 2008 7 comments: