May the First - A Laboured Day (CsH)

A few days ago I received a request from my nephew Mahzan, one of the two who hounded me into starting this blog. 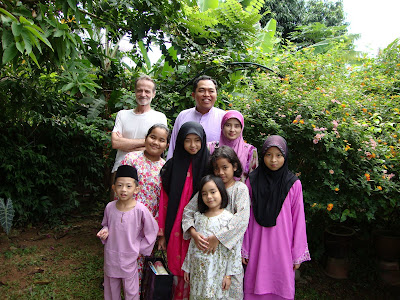 Only three of those little horrors in the picture are his. The prettiest one next to him is his long-suffering wife, Sabrina. This photograph was taken during last year's Hari Raya in the Scots (sort of) Uncle's garden.

He asked if I could indicate a kind of signpost in my archives so that he and his children can recognise and read a family-related posting. Okay 'Zan, I know you're dreadfully tied up with work so I can only devise this DIY system. I have added (CsH) to all the relevant postings. That has taken up a great deal of my time which I could better spend in snoozing and watching the grass grow.

And by the way, I have also prepared a set of questions for each of the family postings - to be answered by you and your brood. If you have any problems, consult your nephew Ariff. He has read some of my scribblings.

And here's a musical signpost from AsH.

There are numerous lyrics for this well-known traditional Welsh folk song. This is the one I learned in school. And thank you Din, for the acronym.

The ash grove how graceful, how plainly 'tis speaking
The wind through it playing has language for me.
Whenever the light through its branches is breaking,
A host of kind faces is gazing at me.
The friends from my chilhood again are before me
Each step brings a memory as freely I roam.
With soft whispers laden the leaves rustle o'er me
The ash grove, the ash grove alone is my home.
Posted by anak si-hamid at Saturday, May 01, 2010

Watching the grass grow.. mmm I should spend sometime at this new sport.. thanks for sharing

Wan Sharif,
Thank you.
I think you're too young for this hobby. You're needed to be a mover and shaker - shake a couple of apples/jambu from the trees.