School Books I Have Known (CsH) 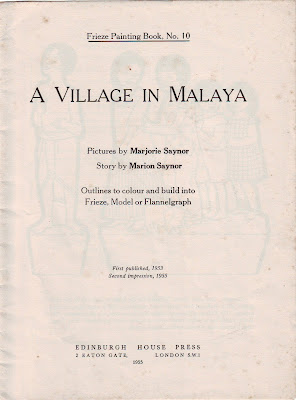 "A Village in Malaya" by Marion Saynor is about Kim Tong's family who live in a resettled village sometime during the early 1950s.


It was 8 years after the Second World War. The young Elizabeth had just been crowned Queen of her homeland and of the Empire. The Communist Insurgency was at its height. I still remember those times when we were travelling by car to visit relatives in Kuala Lumpur. We could not bring too much food with us and we were constantly stopped at Police checkpoints. I also recall seeing soldiers (Malay and British) patrolling the hills and roadside in Johore.

And this is how they described and categorised us!!! 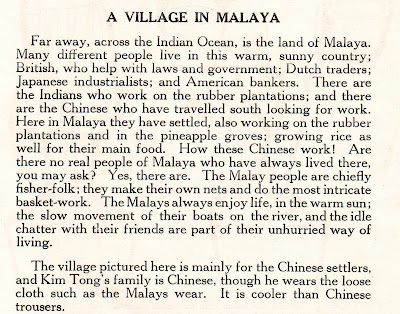 "How these Chinese work!" The 'real people of Malaya' are the Malays who "always enjoy life in the warm sun, the slow movement of their boats on the river and the idle chatter with their friends are part of their unhurried way of living".

It's clear to them the Malays have the life of Larry and so if they are not as rich as the Chinese they only have themselves to blame. This reminds me of the bumiputra British bleating about the unfair competition from the immigrant Indians who keep their shops open for longer hours, for 7 days of the week, thus knocking them out of business.

But the Malays do have one talent as Kim Tong (according to the missionaries) discovered.

Thank goodness for that!


But look who's here? It's a white missionary nurse with her Chinese helper. 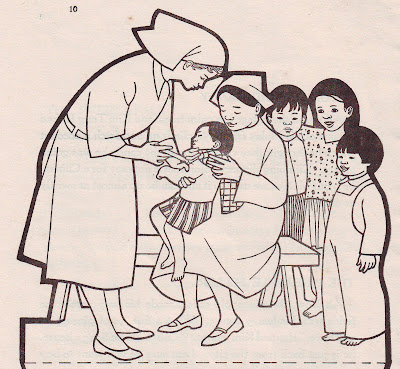 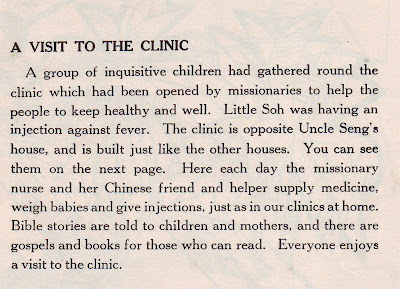 The above text says it all. The clinic provided medical care for the body as well as salvation for the soul in the form of the Bible and Bible stories. It's a BOGOF like they say in Leicester. Buy One Get One Free!

During the 1950s, after the Communist Revolution of 1949, the missionaries were kicked out of China. To fulfil their mission they recamped in Singapore and Malaya - with the blessings of the British Colonial Government - to 'assist' in building up medical facilities and education in their SE Asian colonies.

Wong and Hong in 1971 wrote , "Religion was the motivational spirit behind the various Christian missionary bodies in their endeavours to open and maintain schools in Malaya, Singapore, Sarawak and Sabah".

Although their contacts were mainly with Chinese Buddhists and Indian Hindus they did manage to sneak into Malay space.

Is it Mrs Romlee or Mrs Rom Lee (not likely, I think). Or is it Mrs Ramlee (a Malay name) - but with a son named Baby Chu? Very, very perplexing.

Anyway in Marion Saynor's book this is what a Chinese lady, Mrs Ming looked like. 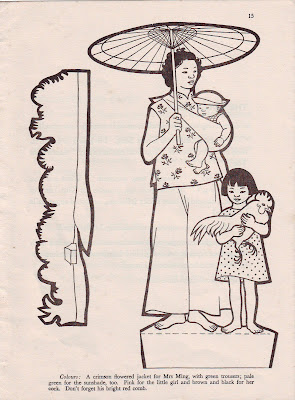 And here is our Mrs Romlee. 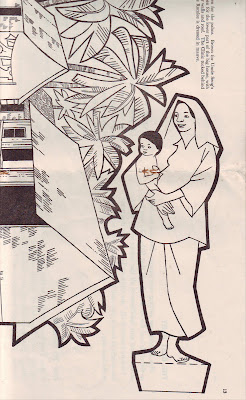 It's amazing how such a simple and simplistic book can elucidate the workings and tactics of the soul-snatchers then.

Today it has become more corporatised and hi-tech. The Malaysia for Jesus website has this to announce. They now have an "evangelistic playlist ..... distributed to over 2,000 Muslim Malay students. About fifty additional young people receive it daily. There are gospel recordings and powerful testimonies from converted Muslims. Portions of the Malay Bible are available".

My niece at Universiti Malaya was duped into one of these gatherings.

Nice entry, as always laced with good info/data/history..
I remembered getting free "Plain Truth" way back in late 60's, I do not remember how I became a subsriber but I did use the book to improve my English.
I was lucky enough to know some of the so called truth are far from truth.

Wan Sharif,
Thank you. Oh yes I do remember "Plain Truth". You can get it free sometimes at the Airport or some bookshops. But do you remember Gideon's Bible which canbe found in most hotel rooms?

You have certainly put the PT to good use!
Do wish our kids could do the same with the Evangelists' propaganda instead of getting sucked in.

I love this. Better than Old Lob on his farm.

Is that a Haji's ketayap Mrs Romlee's baby is wearing, or is it just his head of hair? They must all be children of Kandang Kerbau.

PS Herbert W Armstrong, man of the Plain Truth. Full of Armageddon- drenched stories. He always signed his editorials with an elaborate flourish. That's all I can remember.

PS my word verification is 'ingat'.

Dear AG,
But I love Old Lob especially Mr Grumps and Miss Tibs.
Indeed Baby Chu looks like he's wearing the ketayap or maybe the Chinese skull cap.
'Oh what a tangled web we weave, when first we practise to deceive'.

Well,well. Isn't it lucky you idle slippery-tree climbing people had us whiteys to sort you out? Te he!

Are you following the Pauline Hanson debacle at present? Blimey!

In a few months' time I'll come and sort you out - let's have a tree climbing competitition.
Creak, creak help!!

Yes, I remember "Plain Truth" delivered to my granddad's house. I liked the stories and the kind of English they used. I was in Malacca High School back then.

Precisely after being exposed to these types of 'news' that makes me despise fox news in later life.

Eric Payne,
Thank you for your contribution. When you think of the content of today's newspapers which is mainly sensationalised rubbish - Plain Truth and Readers Digest are well written. Yes, sometimes the stories are interesting but we need to be a tad critical of the hidden message and agenda.

Dear Eric Payne,
Thank you again. We, especially our young, have to learn to read between the lines, to search for the covert messages in both the print and electronic media.