The Industrial Revolution and 'Modernisation' have wreaked havoc on our environment. We abuse our forests, our wild life, our fellow-beings in the jungles, villages and cities. We pollute the oceans, rivers and lakes and the atmosphere because of our rapacious greed and conspicuous consumption.

During the time that I have lived in this country I have read tracts and seen documentaries that put the blame for environmental degradation on the 'loss' of the rainforests in Malaysia and Indonesia. Brazil gets the same stick but the condemnation is not as vociferous and damning. Of course the favourite demon today is China, the big new kid on the block, for her irresponsibility in contributing to the globe's greenhouse gases. China is after all, only copying what the West had achieved on their road to unbridled capitalism for the last couple of centuries. It seems that Western nations and their environmentalists are living up to the proverb of "Don't do as I do, do what I say".

People in the West especially, are now urged to go green or at least be seen to be green. Recycling is their latest 'hurrah' word. They are encouraged to 'do their bit' for the environment. Didn't they know that the poor in India, Indonesia, the Philippines and other poverty-stricken parts of the world have been 'recycling' for yonks when they dig and delve in their country's rubbish dumps? In Leicester for instance, recycling your clothes is suddenly an act of green faith for the good of the environment. It also has the added effect of assuaging your guilt and massaging your ego. 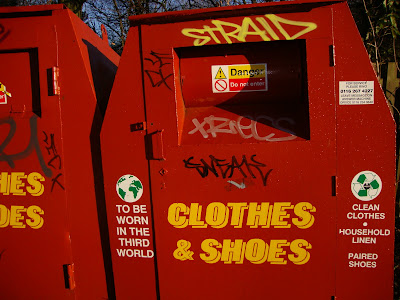 But hang on a moment. Besides the other rampant polluters of China and South East Asia, have we been told enough about the home-grown offenders? For example, the blue-eyed Sheikhs running Canada's 'unconventional' oil fields in Athabasca, Alberta, an area as large as Florida? 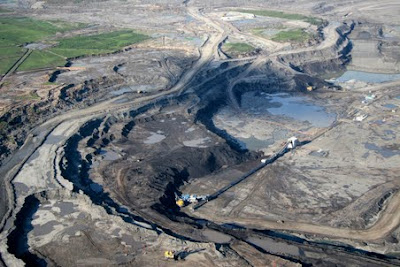 This industry of digging up tar sands or sand saturated with oil is helping to solve America's oil needs for the next century and to reduce dependency on the 'unstable' Middle East. The USA imports 20 percent of its oil from Canada and half of it comes from tar sand. For good reasons this energy source is also known as 'dirty oil'.

Firstly, two tons of earth and sand are dug up to extract just one barrel of oil. Each day, this strip mining burns up 1.3 billion cubic feet of natural gas which is enough to heat up 6 million Canadian homes.

Secondly, 2-4 barrels of water are required to make one barrel of oil. This does untold damage to Athabasca's watershed. It contaminates the water supply and the toxic tailings threaten fish and wildlife downstream. Despite attempts at recycling it still poses a threat to the supply of water for non-industrial purposes.

Next, just like the plight of the tropical rainforests, the extraction of this 'dirty oil' endangers the boreal forest and its eco-system. The survival of the black bear, caribou, moose and migratory birds are at dire risk just like the orang-utan and other wildlife in the forests of Borneo. (It is a shame that mooses and the caribou don't look as cuddly as the orang-utan.) One can say that the health, livelihood and culture of the Canadian tribes like the First Nations and the Metis are as threatened as the Penans and other tribal groups in the tropical rainforests of South East Asia and South America.

As to the release of greenhouse gases, it has been reckoned that by 2011 the Athabasca oil industry will burn up enough gas to release annually 80 million tons of CO2 into the atmosphere. It produces more CO2 emission than all of New Zealand! And yet we hear very little of this but plenty of criticisms about the palm oil and bio-fuel industry of the tropics. Even Britain's favourite shopkeeper, Marks and Spencer has taken up cudgels against palm oil in its biscuit labels. (see http://rockybru.com.my 25 January 2010) It's all part of a design to be 'whiter than white' and to demonstrate their credentials as a kosher-green Store. Where is their conscience when they dumped 5,000 textile jobs in William Baird and Daks-Simpson in Britain (1999) so that they can buy their supplies from cheaper manufacturers overseas? Think of the CO2 emission in transporting these M&S products from source to shops.

On 11 November 2008 Greenpeace activists blocked the shipment of palm oil from leaving Dumai in Indonesia. If they have not already demonstrated their disgust with strip mining activities in Canada, I would like to see them blocking the transport of dirty oil into the United States. May I be so daring as to suggest that our Malaysian TV3 which produces some splendid local documentaries should embark on the same ecological mission and document "The Blue-eyed Sheikhs of Athabasca" - just like all those finger-wagging western documentaries on Malaysia and Indonesia.

We have a Malay saying. "We do not notice the gangrene on our chest but we are able to point at the germs across the river".
We are all culpable and capable of damaging our environment but only the powerful and the rich do it much better - and they get away with it too!

waaah, u suggested that.. Karam Sigh Waliah do some expose about this...

There are two main problems here !

1. The Western PR and Propaganda machinary far out-beats the Asian's ( if there is any from the East )

2. Our own Asians ( especially the youngsters) are too damn gullible ! They'll swallow everything and anything thrown at themby the West !

There was a time when Dr Mahathir mentioned that there should be another news agency to represent the other side of the world other than AP, Reuters and so on----that old man had already seen through these holier-than-thou people !!!

Thank you Helas. I do hope some younger mind could take up this expose. BUT


I cannot help but agree totally with sunnysideup's assessment. Our Asians, not just the Malays are so naive, too lazy and too wannabe-the-mat-sallehs. And they were not even born in the colonial period!! Thanks SSup.

To sum-up what's happening around us( sorry to be crass) - they, the irresponsible and greedy so-called human are shitting at their own dinner table.

Thank you for your comment. Don't apologise for your words for I feel the same. I really, really despise their hypocrisy and double standards.

they really have some nerve to point fingers at asians and latin america when their backyards hide the most atrocious assaults on the planet.

aside from their own sneaky mining and forgotten deforestations of europe and north america, there are all those bombings the us and her allies did and are still doing.

when i was still doing 9-5, one of our board members was one of nasa's astronauts. he once showed us slides he took while orbiting the earth. as we circumnavigated the earth and saw the globe getting further and further from his vantage, he pointed to a huge dirty grey and red patch blocking a whole swath of land mass like an angry boil on the otherwise serene spacescape. he told us the hideous thing we're looking at was the atmosphere above iraq during gw1.

imagine between gw1 and the ultimate savagery of gw2, the daily bombings never stopped. and they hypocritically fret about climate change and all the earthquakes and tsunamis we're looking at now. given the earth's complex and interconnected ecosphere, i've no doubt we're now reaping what they sowed.

p.s. i too absolutely agree with sunnysideup's assessment.

Mekyam,
I love your fire. Your comments should be read by more than just the readers on this blog.
You can get rid of Blair and Bush but the culture and policy of the self-righteous and toxic West will not change.
Only our intelligentsia/academics/media can rock the boat - but they're all too cosy and happy with the system.

Ash, Thank for this informative post.
If you do not mind I would like to refer to/use info from this post as I am in oil business..
Since they control the media, the west has the means to manipulate to their advantage