A Tale of Two Tanks - China and Palestine (CsH) 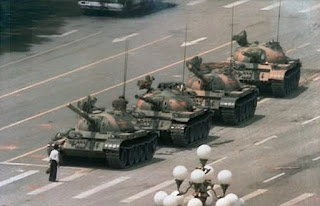 Tonight the Western media is celebrating the eve of the anniversary of the 1989 military crackdown on Chinese dissidents at Tiananmen Square. The photo above has been wheeled out again and again as symbolic of the repression committed by a non-western country against the spirit and practice of democracy - western style.

But do give this picture of a brave Palestinian boy throwing stones at an Israeli tank during the latter's incursion (?), attack (?) on May 19 2003 at Beit Hanoun in the northern Gaza Strip a good look. Remember what happened to Gaza 5 years later? Shall the media remember to commemorate this photo 17 years from now? Already the horrific pictures of a bloodied Gaza are suffering a kind of amnesiac attack.
Twenty years from now, I will have departed this earth . But I hope my nieces and nephews, and their children will not forget to remember this great injustice committed by the Judaeo-Christian culture. Democracy, anyone ?? 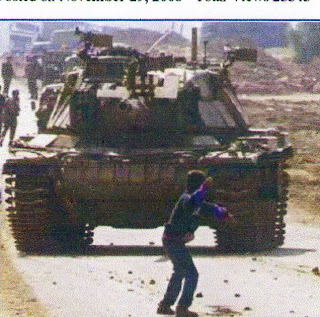 Hi Mak Ngah,
We will make sure you are still writing in this blog 20 years from now..

I wish the bloody west could explain the differences (if any) between the two photos !

Hello Zan, Are you lot planning to feed me monkey brain? They say it's good for longevity. I prefer it masak gulai with cili padi.

Indeed Mus,
Now the American President is going around wooing the Muslims - beware of such men bearing gifts. And anyway the Muslims in the Middle East don't really care a damn for Palestine. They all have their own selfish agenda. I hate to say this, but most of the Muslim leadership (both political and especially clerical) are only interested in halal and haram, dosa and pahala; and other mental acrobatics like how many angels can be found on a pinhead.