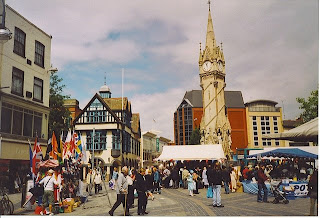 We heard this song played by a violinist sited near the Clock Tower. The whole square echoed with this wistful tune - really beautiful.

Today was a funny ole day for Darby and Joan (devoted old married couple). On the spur of the moment we made a detour from getting a loaf of bread at the local Co-op to doing a walkabout to the City Centre.
We decided on doing something naughty, especially at our age - like having CHIPS for lunch. My eye as usual was bigger than my mouth and I thought of buying a small bag of chips (£1.10)for myself. But sensible Darby says 'no' and so we shared a big bag of chips (£1.45) instead. We sat down on a bench not far from the market - under a tree that is now almost covered with summer leaves - and as we dipped into the bag of chips we observed the folks walking around us. They were mainly pensioners, women out doing the marketing. Not too many male pensioners because the law of averages work against them surviving their wives. Or maybe they preferred to stay at home.
Also there were many young women pushing prams and I reckoned that four out of ten were smoking. In my mind I was thinking about something I read yesterday : about how Britain's former PM David Lloyd George said in 1919 that Britain should be made a country "fit for heroes". He must have been thinking about the millions of young men slaughtered in that mother of all European Tribal Wars - the First World War
(1914-1918). After the Second World War, another European Tribal War that engulfed the rest of the world, Britain was blessed with the Welfare State which promised a cradle-to-grave security.
However, when I look at the feckless young and the dismemberment of family and family values, and the near demise of the work ethic, I would despair if this were my youngsters and my country. There aren't sufficient young people to provide the funding needed to maintain the welfare state. This country is top heavy - there are too many pensioners compared to the economically active younger generation. The pensioners of today have contributed from their taxes and national insurance to support their parents' generation but their own maintenance now cannot be guaranteed. There is simply not enough money in the pot. To make it worse, the Recession means almost 3 million unemployed, and few or no jobs for school leavers and graduates. I do feel sad for the English.
But, as we were walking to the bus stop - we bumped into two dear friends, Dorothy and Anne (see my posting of March 21). We were given the most wonderful news. After her operation Dot was given a clean bill of health - she's in real good nick!!! Hurray!!! To celebrate, I'm cooking them a slapdash (Anne laughed at that word - she preferred slapup) meal this Sunday.
This news made it a lovely day.
Posted by anak si-hamid at Thursday, June 18, 2009

so that's your idea of being naughty - a bag of chips. We had strawberries and lots of double cream. Now, that is being naughty. and on top of that, we played scrabble. And he let me win. The last time he let me win was before we got married.

You'd better watch it, Kak Teh. He's got some ulterior motive. the prawn lurking behind the stone.

It's a shame but strawberries make me windy buurrp.

Oh, dont i know it, and I fell for it everytime! At our age, a triple letter score is enough excitement to make me reach for the ventolin.