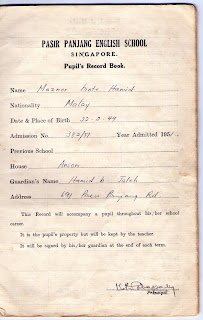 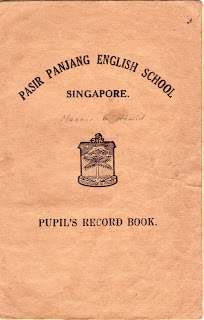 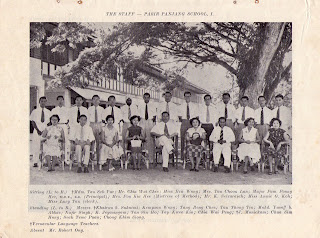 Mrs Tan is seated, fourth from the left. Isn't she gorgeous?

Remember your first day at school? Lucky me - I had two first days in 1951.


Sometime in January 1951, my dad enrolled me at Sekolah Melayu Pasir Panjang (Pasir Panjang Malay School), somewhere at 6 milestone Pasir Panjang Road. It was a homely little school, a school by the seaside - consisting of one longish building with 6-7 classes. There was a separate little store on the side. The schoolyard was snug and cosy, a mini field of grass tucked between the school building and the sea. During break time almost all the kids rushed to the edge of the playground to stare longingly at the shimmering sea. I can still remember it was high tide then.


In the classroom I sat on this chair which was attached to the desk and on that desk I recalled my first lesson. I wrote my first letters in Jawi : alif, ba, ta using white chalk on the desk itself. To this day I don't know what the desk was made of but I remember how we could easily erase our writing from the desk


On that first day, I wore a scarf. It wasn't because my dad was a strict orthodox Muslim. You see, my hair was just beginning to sprout and without that exquisite 1950s scarf my head looked like a porcupine! Of course I received a lot of odd and quizzical stares but that was all. Little children were not so mean and cruel in those days.


Why the camouflage? This much I can recall. I had measles and just as the spots were beginning to shrivel I had run out to play in the rain. Well, the measles recurred with a vengeance. This part was related by my sister. She said my temperature soared so high they had to strip me and wrap me up in layers of banana leaves . Remember this was in the very early fifties. She saw the leaves curling up and turning brown because of this hot little totty! But I survived and because the pistules had spread all over, my head had to be shaved and it left me as bald as a coot! Hence the scarf.


"Selamat Pagi Che'gu" were my very first words on my first day. There was no apprehension or nervousness, just a sense of being grown up at last! ( I prefer the spelling Che'gu because it spells what it means, Che Guru. I guess I'm just old-fashioned and stubborn ).


But the very next day I was chanting "Good Morning Teacher". For I had now moved to another school. I now found myself at Pasir Panjang English School, located at Yew Siang Road, which was much nearer to our house at Kampung Abu Kassim. This time I was wearing the school uniform made up of a light blue blouse and a dark blue pinafore. I could not remember my school bag but that symbol of schooldom, the blackboard, was a proud accessory. In a way the blackboard meant you had arrived - you were now a schoolgirl, not just a snotty kid with nothing to do but sit at home, helping with horrible domestic chores and minding your little bratty brothers. But , it also marked you as a greenhorn, a new kid on the block. So, after a few weeks the blackboard ceased to be a badge of adulthood because you stood out as the runt in the school.


The blackboard was actually a board painted green on one side so that you could scribble on it with chalk. I loved drawing with the coloured chalk and my mother made sure I used it to the very last millimetre. However, one day, on my way home alone, from school I was chased by a dog. In terror I dropped my blackboard and after I retrieved it, I noticed one corner was chipped.


I received no sympathy from my mum and got an earful of chastisement from her. Another blackboard was out of the question and I had to live the rest of my Primary One days with a chipped blackboard and a dented pride.


And so for the second time Abah had to enrol me into another school, this time an English primary school. I remembered clutching his hand as we approached PPES. It was so, so much bigger than my one-day-school. The school building was cream and green in colour and about 5 times larger. It was double-storeyed, with huge staircases, big glass windows and a large tuck-shop. The school field was huge; you could put in it 3-4 football fields. As for that field, it became a place of fun and games for my brother Mus. He and his rascal sidekick Jeevan - when they were about 10 - used to raid the caretaker's garden at the edge of the field and stuffed themselves with roasted tapioca. As to his other antics at PPES I shall leave it to my scally-wag brother to recall.


This time I was really scared and when my dad left me to go back to work, I got misty-eyed as I waved him good-bye. BUT I was not like the other kids whose mums draped themselves at the class windows to make sure their offspring were fine. I remembered one girl who cried each time her mother disappeared from view.


I knew not a single word in English . My very first lesson was a nursery rhyme.


Jack be nimble, Jack be quick,
Jack jumped over the candlestick.
I hadn't the foggiest idea what it was all about. But we all enjoyed jumping when we got to the last line. My classmate who sat next to me was a boy named Tan Aik Chuan. We smiled shyly at each other and he gave me a present of his pencil. But it was a short affair because I discovered Geow Chwee Him who seemed a nicer boy. Oh, I was a hussy!! But I want to mention here Chia Tzu Tit - crippled, because one of his legs was shorter than the other and to compensate, one of his shoes had to have a very thick sole. Tzu Tit did his utmost to keep up with our pace during class assembly and we all made sure that he did not overstrain himself. Tzu Tit was a kind and helpful soul. We all would go to him whenever we had a problem with Arithmetic and he was always very obliging. The last I heard of him was he became a nuclear physics Professor in some American university - he deserved it.


Last but not least was my Primary One Class Teacher Mrs Tan Choon Lan - such an elegant lady in her cheongsam. She taught all four of Abdul Hamid's children when they were in Primary One. Mrs Tan was a warm and caring teacher, not in the touchy-feely way as with teachers in England. For she had the tough job of teaching in English to kids for whom English might as well be a language from another planet; but she was patience itself and she never ever made us think we were stupid or slow. She made us feel very secure, such a pre-requisite for learning. I don't think I will ever forget that picture of her bending over so delicately in her cheongsam just to help one of her pupils tie up his shoe lace. I believe if there were more Mrs Tan Choon Lans in the teaching profession, a lot more kids would not have fallen by the wayside.


Mrs Tan may be the first but not the last in this series of wonderful teachers at PPES. There were Mr Chong Khim Siong, Mr. Kempson Wong and Mr Chia Wai Chee. I owe them a lot. They were strict, at times funny but always committed to their pupils and their profession. When I became a teacher in 1967, they were my models. I hope that I have been able to light that same fire for learning in my students as they have done for me.

I have been a silent reader of your blog for some months now.

Thanks for sharing your experiences and viewpoints.

I believe I have had the fortune of having met you and your husband, aeons ago. We were mutually introduced by a former student of yours, Jailani, after the conclusion of a ghazal show in Singapore. I remember being told not to call you Miss Hamid, but Kak Maznor.

I am particularly struck by your comment that the student must feel secure in order to be able to learn. As a teacher (now), I do try harf to make my students, who are from China, Myanmar and Sri Lanka, to feel comfortable and feel that they are able to master the subject.

Dear Jasmani,
What a lovely surprise and thanks for the comment.
I suppose it was easier for me when I was teaching our own kids. You have a tougher task with foreign students because their cultural background are all so different and the injection of humour and jokes (which help so much in breaking the ice, so to speak ) into your lectures would be nigh impossible.
But they have to feel that they can trust you to guide them in achieving their objectives which may be altruistic or utilitarian.
Nevertheless one teaches to enlighten but nowadays it has all become so commercial. One teacher was told by his student ; "I pay money for this course." In other words he wants his money's worth - just what that is, is anyone's guess. I hope your teaching experience is not too blighted by crass merchandising.
Good Luck and Salam