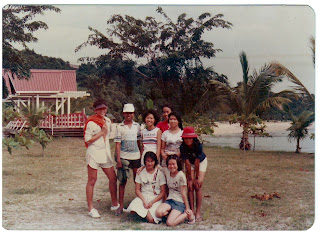 Just 8 of the many lovely kids I taught at JSS.
From the Left: Din, Yuwrajh, Lely, Ben, Oi Bek, Rojiah.
Front: Rohayah, Irene


There were no class photographs for Jurong Secondary School's School Magazine. Instead individual photographs of the students were used for each class. It was a relief for the teachers too because you do get weary of having your mug shots taken with tetchy teenagers.

I decided to post the above photograph for two reasons. That lot above were/are such a fitting example of what Singaporeans and Malaysians should be - just like my schooldays of many years ago. They are made up of 2 Peranakans, 2 Chinese, 2 Malays, 1 Indian and one of Bangla Deshi origin. Amongst themselves they speak and curse and swear in English, Malay, Hokkien and smatterings of Mandarin. They tease each other using terms which we would describe today as racist. They are frequently in and out of each other's homes - which are made up of flats in Jurong Town. So you do not really need a kampung atmosphere to bond in a relationship and friendship that can be found only in Singapore and Malaysia. And as I mentioned in a previous posting, JSS is a Chinese medium and English medium school and such a medley of kids could only come from the English stream. I use the word 'medley' because when kids of different hues get together they make very good music. Secondly, I chose this photograph just to annoy them with memories of their wild and woolly days.


What made JSS special? Because I had spent a year away from teaching, I did not feel so jaded and depressed about getting back to work. But that trip abroad also gave me a different perspective about kids and teaching kids. They need room to express themselves and they want us to trust them, albeit a little in the first instance. But I still keep faith to the old adage: start by being firm and loosen the leash later.

It was sometime during my first week in the school when this 'rejuvenated ' teacher met her first challenge. I was on my way to the Teachers' Common Room (isn't that an old-fashioned term) when I saw a little commotion in one of the classrooms. There was a bunch of 14 year old boys pushing something into the class cupboard. I put my head in and asked them if there was a problem. They were startled and as a result several boys 'fell' out of the cupboard, the littlest of them was the first one to descend and I still remember his name : Suhaimi. The puzzled (not angry) look on my face made one of them explain : "We are trying to find out how many (boys) can be stored in the cupboard." This rascal and his accomplice are in the photograph above.

What did I do? The normal thing is to round them up and call in the Discipline Teacher. I just told them, " Be careful". When I got back to the TCR, I broke out in laughter at the antics of these scallawags. They've got spirit I said. But some of the teachers frowned and said I should have sent them to the Principal's Office. Only one teacher shared my glee. She's KT Lim who became my special friend and colleague in that school. I found it strange that the ones who disapproved were younger than KT and I !!

This was a foreboding of times to come.

We had such a wonderful time during that trip.

Bek's not looking quite happy in the photo. Hmm..wonder what's Ben doing behind her ???

Din has got nice legs...

Any news, anyone with regards to Mr Durgude ?

Just got in touch with Irene through facebook...Really made my day !

Do we really look that skinny all those years ago?

What else have you got in store Miss Hamid? Anyway i can vet through before being exposed online?


This is getting rather scary...and emotional.
We were all so innocent ( well almost,anyway)and looking back at the photos makes you wonder what you have done with your life,the what if's and what not's...

Dear SIE.
What else have I got?
Just wait - just you wait!!!

No, have no fear Ben - what I blog is kosher, very kosher. But you must come here to look at my collection of photos - stuff I'm keeping for blackmail, for when our pension diminishes.

It's the past that builds us up - and you lot have done pretty well - no ifs and no buts. I get scared too when I look at those photos - what have I done to deserve this??

As for PH and Syukri,

Will you please behave? Remember, others are watching.

Aren't you scared of Uncle?

Anyone have the photo of THE swimming pool incident ?

Tanjung Jara, at 2037hrs where we saw something in the pool?

ohhh...another thing, Rocky and me had an encounter with a ghost during that trip.

I am sure the ghost had the same reaction when it encountered you and Din.

You two have a penchant for getting into trouble. Thank goodness one is in KL and the other is in Jakarta.

i have nice legs if you want to check them out ... but this boy din doesn't look like me at all. could not have been me.

you guys will have a hard time trying to prove in court that rocky was indeed din.

how come oi bek, lely and ben look the same as before, eh? you guys, er, hardly grew up! heh.

as for the pool in tanjung jara, i deny. guys, i am a respected and revered citizen of malaysia, president of the national press club, and a blogger .. i could not have been anywhere near the said pool.

Din, i will check out your kaki the next time i see you.

For heaven's sake - you lot are just the same as 32 years ago !!
Again why me?
All I wanted to do was to write about how people of different shades and hues can get on so beautifully together, that you people are the supreme example of what it means to be Singaporeans/Malaysians.
SIGH !!! I give up. But never mind, you're all still cun and cheeky - you make this little old lady happy and proud.

I've spent the entire day browsing this blog for updates. All my activities are on freeze....

I'm camping here all the way to pre-empt any unwanted surprises!

The last two days is filled up with 30 over years of emotions. So much to say and don't know where to start.

Funny how you think that none of your friends change through the years until you see a very old picture. I think Din is the one that has changed the most!

SIE and PH and Din,

Wah! you lot are obsessed with legs lah.

What about the brains - too terrified to discover there ain't nothing there eh? A big vacant lot between the ears he he!!

Okey dokey see you lot in Singapore on Friday, just some of
you only. I can only take a few of you at a time.

i have SiFu's tea to take care of the stomach :)