The Ramblings of a Malay Malcontent - Part 2


We Malays were told by by Sir Vidiadhar Surajprasad Naipaul (Sir Vidia) in his book Among the Believers (1981) that "Malays dressed as Arabs but formal Malay clothing of tunic and trousers were copied from the Chinese. The velvet cap is Indian." This book is also littered with umpteen derogatory and insulting statements about Malays, Muslims and Malaysia. The above quotation is in fact very mild and very tame.
Sir Vidhia is bravely carrying the torch of the imperious literary tradition of mocking and making fun of others of darker hues. However it is difficult to comprehend why a descendant of indentured Indian coolies, born in Trinidad should write such condescending and snide remarks about a people whose colour is no darker than his. Or could it be because of his pathological dislike of Muslims - a hangover from his pukka education in England? Still we have to acknowledge his skills as a story teller, a travel writer and a wordsmith.

Following are some old postcards to illustrate why we are what we have become, whether we are Chinese, Indians or Malays. Especially in the case of the bumiputeras the perception of Westerners has not changed. Even non-westerners are now joining the game of bashing up
the Malays in Malaysia be it in non-fiction or fiction. 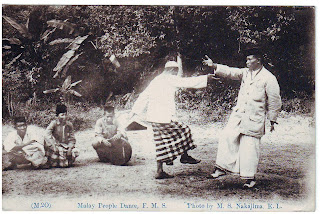 Here we are dancing our time away in our sarong and songkok and haji hat, nothing original according to Sir Vidia.
The message behind the card says " These are Malays dancing. It looks as if they were doing the Highland fling. " So we're a chip off the old Scottish block eh! 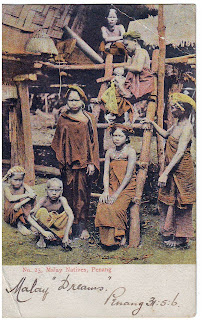 These little Malay women need civilizing and emancipation. Can you see how miserable they look? A good dose of literature from the stables of Sir Vidia would really light up their life and they'll be sharing their angst with the rest of the world about how they resent and loathe being Malays, especially the female variety. 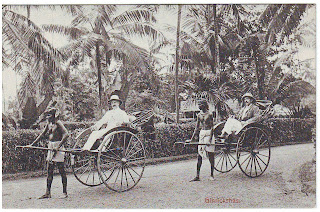 This is a postcard of Ceylon showing how the masters of the Empire keep the natives occupied besides sending them to the sticks like Malaysia and Trinidad as coolies.
These victims of the Raj have every right to sue the Great White Mother and perhaps Sir Vidia could lend a helping hand. 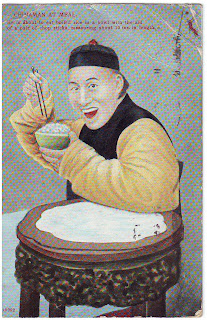 This postcard was published by Yee Wo Shing, Dealer in Postcards, Stamps and Novels, 7 Canton Road, Kowloon.
This is a rare picture of the Chinese enjoying himself because we are always told that we should emulate them in their work ethics and work habit and contribute to the wealth of our country.

Now that we can see some errors of our ways, here are a couple of Christmas and New Year Greeting Cards circa late 50s or early 60s. I bought them from a bookshop in Muar about 22 years ago. 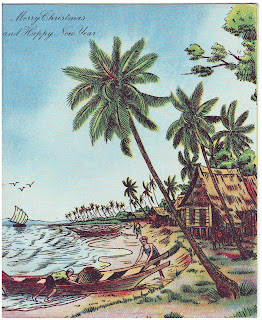 This is lovely idyllic Malaysia where you can see the Malay fisherman pulling in his boat. They live in cute little kampung houses where life is peaceful and easy. 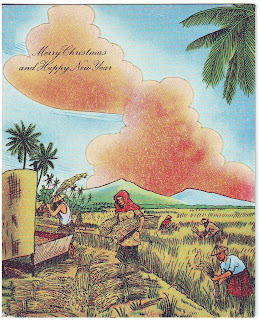 The Malays prefer to grow padi instead of working in the rubber estates and tin mines.
They do not participate in the cash-crop economy because they do not like to work far from their home and they are contented with the ethos of kais pagi makan pagi kais petang makan petang , a subsistence kind of existence which of course makes no contribution to the GNP.

Well, these greeting cards tell us what kind of economic activities are suitable for us. But then, after Independence we wanted better and became doctors, lawyers, engineers, accountants and bankers although we do have our share of crooks and charlatans. What upstarts ! This achievement has nothing to do with them working hard and using their brains and making sacrifices like all parents do. It's because of the NEP and in the process they discriminate against and impoverish the other 40% (?) of the population.


The Beatles put it very nicely : You're thinking of me the same old way. You were above me, but not today.

That's all folks. And I apologize for the messy layout.
Posted by anak si-hamid at Sunday, January 04, 2009

loves your write up. i will keep track of it plus make use of it too as record in my blog too.

Yes Mak Ngah... Malays are becoming bloggers too (and really good at it!).
Geez, thanks for popping by at my blog!

you would be a terrific source for actual experience at being discriminated upon. your life experience in singapore, studying and teaching and helping out bumiputeras should inspire others. it does to to me. thank you.
with warmest regards/sakmongkol

Yes, it's hard indeed to shed the image of the Lazy Natives no matter how hard we work and how much we have achieved.

I have immersing myself in G.E.D Lewis's Out in the east - and indeed, although he was too much of a gentleman to spell it out loud -complacency is the word associated with Malays.
Hope you can find the book.

am i wrong to say that the colonial masters subtlely & consistently try to impose/sell their culture & belief/religion in their Solomon Grundy as well coconut tree christmas cards??
Its either a very very bad joke or, I take this more as an insult to our faith. If its true they had the intention to change the religion/beliefs of our forefathers & this has not been highlighted before....its not too late for the 'protector of M'sia's official religion' to demand an apology from the Brits.

Trivial? I don't think so in the light of a bible in malay. 20 years down the road our grandkids will be cursing us for not making a stand in this.

This is brilliant ! I dun know if it's subtlety, cynicism or satire.
The message here is only limited by one's imagination !
Is it a case of 'whoever eats the cilli will feel the hotness ". heheh

it's hard to fight stereotyping. the only known way is to counter the negative images with positive ones.

the unfortunate part is for every positive image achieved or earned by some, there are many who seem to help, either unwittingly or otherwise, give credence to the negative stereotypes.

most satisfying will be to do an ivanna trump ["don't get mad, get even!"], but it'll never be possible if some of us are hellbent on being our own worst enemy. :D

p.s. my first intro to naipaul was "a house for mr biswas". i put him right up there with tagore, achebe, fugard, soyinka et al until i read an account of his visit to malaysia [probably by nst then columnist rehman rashid] where he came across as a arrogant "more white than the white" pr*ck. "among the believers" is gathering dust somewhere on my bookshelves, unfinished.