The Ramblings of a Malay Malcontent (retired and retiring) - Part 1 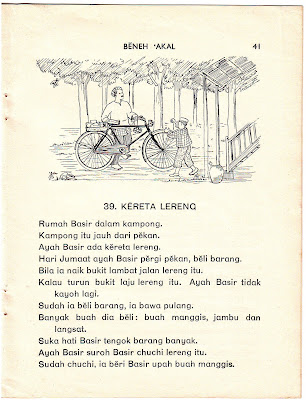 This was scanned from my Pasir Panjang Primary School textbook titled Kitab Beneh Akal, published 1956 ( First Edition 1928 ) for The Department of Education, Federation of Malaya by Macmillan And Co. Limited, St Martin's Street , London. That should place me somewhere in the Mesozoic Era together with the dinosaurs! The kereta lereng is a bicycle - what do the Brits know in those days?


Thank you Kamikazepilze for this lovely song. Look out for the lady standing by the roadside with a baby in her arms at the part of "Badan pipis macam keropok...". That lady is Jai's grandmother (see my posting 28 November) and this whole scene was done in Kampong Tanjong Keling, Singapore. Thanks to P. Ramlee, the lost landscapes of Singapore are preserved in his movies. That's all that's left to us.

But we must be grateful because under Pax Britannica Malay society was preserved under the protectorate system. In fact in my Singapore Identity Card of 1956, I was registered as a BPP (British Protected Person) because I was born in Selangor. I still have that document. Also the feudal society was perpetuated. We , the noble savage needed to be preserved in our kampung, growing rice, vegetables, weaving baskets and mats and denied the education that the nobility and the immigrants in the urban areas were privileged to. Although now and then we have this strange desire to go amok, wielding parangs and sticks and threatening the the right of everybody else to make loadsa money. I suppose the Gulf Wars must be the Mother of all Amoks though the motives are a tat different - they are denying the poor Iraqis the
right to their own money.

Today the Malays have their SUVs, air-conditioned houses, English wallpaper lining their rooms, Queen Anne and crystal crockery, Portmeirion plates that cost RM 130 each, I am told. But this is just bread and circus - because the Malays are still bonded to the liturgy of the past : The Malay is not industrious... they are an indolent, contented, thriftless unambitious.... The Chinese who are the mainstay of the commerce of the country are the most numerous of the foreigners. They are engaged in every kind of trade and business, and monopolise the tin mining industry. This is an extract from " A School Geography of the Malay Peninsula" by G.W. Hepponstall, late Assistant Master, Victoria Institution, printed at The Methodist Publishing House, 1911.

Victor Purcell wrote this for a self governing Malaya.

...........Yet time serves wherein you may redeem
Your banished honours, and restore yourselves,

but this also serves as a cautionary statement for the Malays and their future generations.

To my young commentator, Putrajaya-afath, I hope you approve of this posting.

Ms Hamid, I know a Malay who must have read that description of Malays, (although he told me that it was in some encyclopaedia, where Malays were described as complacent), bought a bike and started on a journey around the world. This was in late 1950's. He documented a lot interesting events along the way. He wanted to prove that malays are not as described. Alas when he got to London , met a gal, got married, got into trouble with the law.

Coming back to the Japs on bicycle, the Brits didnt believe that they were going to cycle all the way to take over Malaya. Some years ago, I met some POW's who spoke of their disbelief. One of them was of course the junior Percival.

i have been waiting for you to write something such as this piece. you seem to me as a person who can write on certain issues very objectively and comes across as someone writing sincerely. in particular, the evolution of malay society is Singapore from a first hand observation has always intrested me.

and of course, your style of writing reminds me the English teacher of the old school.
with warmest regards/sakmongkol

i think when we read those condescending things that were written about the malays by the colonialists, we could respond in one of these ways:

- accept its untruth and make it a self-fulfilling prophesy

- dismiss it and carry on with the cards God deals us and let the chips fall where they may.

p.s. it was really neat listening to p. ramlee's "mencece" while reading this entry. i replayed the "badan pipis macam keropok" part to see jai's aunt.

Hello again Kak Teh, would love to hear your account of the POW's experience.
My Pa'Uda was taken to work on the Thailand Railway and he was never the same after that.

To SakmongkolAK47, I still have the letters my father wrote to me and I used to say he writes in the crisp old-fashioned way. Like nowadays, youngsters do not say 'thanks' but 'cheers'. Does it matter as long as the sentiment is there?

Dear Mekyam, you're a THINKER and I like that.
My response to contempt is to mock it and play a game of tit for tat. Don't get mad, get even.

Nostalgia is like an opiate...soothing us when all around we see mayhem and materialism.
But doesn't everyone long for such 'simple' times? When loved ones and places were still around and childhood wonder hadn't given way to jaded cynicisms. Unless one has a heart of stone.

I've always enjoyed P Ramlee movies sometimes for the messages conveyed, but more as time machines taking one back then to when...

I also marvel at how much effort must have gone into the making of these gems when movie technology was rudimentary more so in this country of indolent and complacent natives. Just look at the overhead mencheche shots that give us a helicopter view of the scenes passing by. Don't you wonder how it was done? Using a lorry, crane, superimposed. Fantastic.

Keep the posts coming. And don't be too hard on your teacher-selves for the mess left behind. I believe the usual suspects are most loath to owning up as they continue on their depredations.

Ms Hamid, I had written about the POW's experience in the blog. It was based on the 60th anniversary when Singapore fell into the hands of the Japanese.
Anyway, do you know more about yr Pak Uda's experience?
During a conference some years ago I met this scholar who managed to get hold of jottings of one Malay POW who worked on the Death Railway. He did a study of that and I think will publish his thesis. Very interesting indeed. I have the paper somewhere and if you are interested and will try to look through my chaotic library.

Thanks for the info Kak Teh. Would love to read the account of the Malay POW. But my poor Pa'Uda made no record and what we knew is just what we could glean from his sister my Ma'Cik Munah.

See what we lose when we marginalise our our elderly? We are too fond of the ethos that the old should be treated like an old Koran - still to be respected but cannot be read anymore. If we keep on doing so we do it at our peril.

As far as I remember , when I was a kid, we use to roll a bicycle wheel (minus the spokes) in front of us, then we used a stick of about 80 cm., to push the wheel by lining it on the groove of the wheel . This is done as as we slow-jogged behind the wheel.

That game is called (if I am not mistaken) 'main lereng)