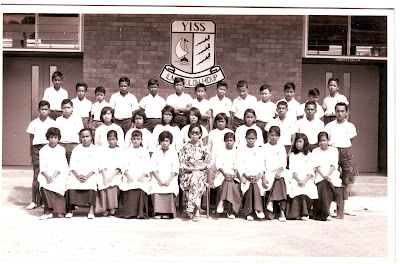 My Lovely Island Kids; Shame about the Teacher

So happy I found this photograph. There are 4 Chinese kids in the picture. One lass is standing just behind me. Her elder brother is at the right end of the same row. The third one is in the back row , just under the letter 'p'. The lad to his left with the head bent became a professional diver, working in Australia with his elder brother and the 4th Chinese pupil is to the left of the afore-mentioned. I often wonder about what they are doing now - has life been difficult for them? I hope not for they deserve more than the well-heeled and obnoxious middle class snobs I used to teach at Anglo-Chinese Junior College.

I disliked having my photograph taken because I always end up looking like a nerd! But I remembered one lecturer in Sultan Hassanal Bolkiah Teachers' Training College in Brunei who insisted that only her left profile be photographed because that is her best side. For me , the back of my head will do!!

P.S. That settee in the earlier photograph was bought by my abah, second hand, from his Eurasian neighbor sometime in 1946. It had moved seven times, including journeys to Johor Baru, Batu Pahat and now happily ensconced in Kuala Lumpur. Three generations of kids have jumped up and down on it or fell asleep on it, including umpteen numbers of cats. Even Rocky had rested on it.

My spouse and I, we are indefatigable magpies. Watch this space to view our collection of junk.
Posted by anak si-hamid at Wednesday, December 03, 2008

looks like you're really getting the hang of this scanning thing. ;D

enjoyed both this and the earlier entries. the b&w pictures too. as someone commented, the one of your parents' living room does look like something that came from a p. ramlee movie set.

Ms Hamid, I would certainly love to see your collection of what you called junk. I bet they are your treasures.

Hahaha, I think the only people to get the backs of their heads in photos are the musical conductors!

Do you get invited by former students to attend school reunions? That's a great way to honour former teachers.

Hello, Queen of the House,
I like that bit about the musical conductors - lucky people!

No, strangely enough, they have not organised any reunions. But a number of them still keep in touch with me. In fact one is turning up this morning from Singapore to spend the weekend and Hari Raya Haji with us.

BTW< why are you designated as Queen of the House?? I have a plate on my wall which says : 'THIS KITCHEN IS CLOSED DUE TO SICKNESS. I'M SICK OF COOKING"

Ms Hamid ... I chose the name QOTH not because I love housework. It's just that most of the time I get to lord over all of them at home, mwahahaha!! Actually, it was my son who proclaimed me the Queen of the house (oh ya, he loves his mama so much ... nothing less than the Queen title for his mum!)