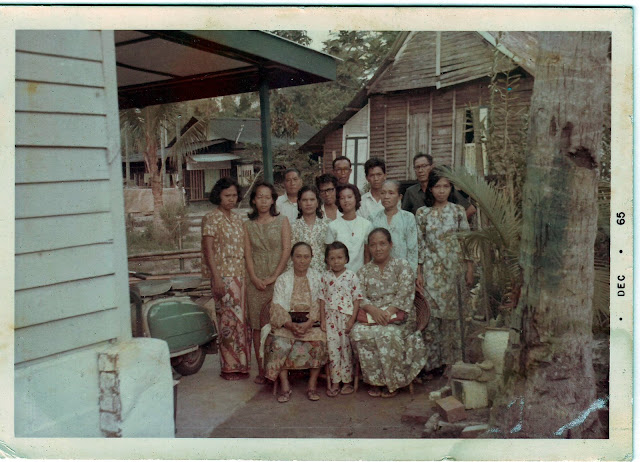 
Also in the photograph, to the left is Mus's Lambretta, his magnificent fire-horse.If only that scooter could talk.

Mamak Kassim passed away on Sunday 28 May 2006 at the age of 93. He was the last one of my father's generation - the last for me, of the great Malay gentlemen. Pa'Tua Majid, Ayah Long Mahmud, Pa'Busu Kamarudin. Pa'Uda Shariff and of course my dad (he was called Pa'Anjang because of his height, although they were all tall men) were a breed of Malay men brought up with a unique mixture of Malay dignity and grace, flavoured with upright colonial style.

Born at the turn of the 20th century, they were western educated, schooled at Victoria Institution, although they had a sound Malay education at primary school. Ayah Long and Pa'Tua succeeded in getting their Cambridge Senior School Certificate - must have been quite an achievement for two boys from Setapak brought up by grandparents who came from Sumatra in the latter part of the 19th century. Their grandparents would be in the category of working class folks. My great-grandfather used to accompany the British map surveyors who were drawing up topographical maps of the Malay Peninsula. In fact Mamak followed his footsteps because he ended up drafting maps in the Land Survey Department.

As for my dad, all he got was a Junior School Certificate before he became a qualified Sanitary Health Inspector. Years later when I was chatting with Mamak (he was 90 then), he volunteered the information that "Hamid was very bright, the brightest among all of us. But he was too playful. He used to spend a lot of time with his favourite teacher, Mr. Lim who tried to guide him into pushing himself to do his best." This sounds too familiar to my ears. In all my teaching years, especially while teaching in Malay Secondary Schools and English Secondary Schools in Singapore, I encountered quite a number of pupils who in themselves were intelligent but could not realise their full potential. It's possibly due to the shortcomings of an educational system that gives no space for bright imaginative minds or because of family circumstances. For Abah, it was a combination of both.

Abah's mother died when he was about 6 months old, when she was still breastfeeding him. Naturally he was taken away from his dad who lived in Kuala Selangor and moved in with his maternal grandparents. At that time, his aunt was also breastfeeding a baby and so he had a share. The other baby was Ma'cik Munah, who became his 'saudara se-susu' (literally of one-milk relative ). She remained my dad's very loyal and kind sister right to the end of his life.

She could always turn to Abang Hamid (big brother Hamid) when she needed to and she was also close to my mother who she called Kakak (big sister) even though my mum was almost 12 years younger. Ma'cik Munah said to my mum. "Kalau ipar baik semua boleh baik". (If the in-law is good then all relationships will be well ), Other than my mother's eldest sister Wak Deng, Ma'cik Munah was the gentlest, kindest soul I know. She had a very difficult and troubled life but she remained patient and kind, almost saintly. I last saw her when we both went to Abah's grave just a day after his burial. We read the Fatihah and Surah Yassin together for her Abang Hamid. I'm tearful now, thinking of her, and regret so very much that I did not keep in touch with her. My siblings and I did try during the last 10 years or so but we met several dead ends. She passed away about 3 years ago.

Back to the Malay gentlemen. Though they had an English education ( my dad talked about their schoolmaster, not schoolteacher, who wore his robe and mortarboard in class ), their Malayness was never adulterated or diluted. They were never westernized or deracinated like the present younger generation Malays who ironically grew up in a Merdeka country, were given Malay education throughout primary and secondary school together with a strong Islamic ethos, but instead turned into moonlight Westerners or moonlight Arabs!

Malays in Malaysia have their acknowledged heroes, like the sasterawan, journalists, editors, politicians, novelists and artists and so on. There were however, the unmentioned heroes, men who were not rich enough, gifted enough, men with little influence and connections and power to design the rules and structure for the construction of a free Malaya. But these were the foot soldiers, who provided the backbone and infrastructure and kept the system and the transition running smooth, from being a land of British possession to a free nation.

These English/Malay educated Malays, in their quiet steadfast way guided their homeland through a difficult period for any newly independent and developing country. They worked in the Government departments, keeping the wheels of bureaucracy moving. Pa'Tua was in the Education Department, Ayah Long was the Chief Clerk in the District Office in Klang and Mamak was in the Land Survey Department in Kuala Lumpur while Pa'Busu joined the RAF and then transferred to TUDM.

What epitaph shall we give to men like these - and there must be thousands of them?

As their family, we keep their memory alive, we pass on their stories to the future generation. Isn't that so, Mahzan? No one wants to dramatise these plodders but their contribution speaks for itself.

Ms Hamid, yes i remember many malay men from my father's generation, those like you mentioned here. There was Pak Mail town planner, daruih EO, there's a Mat Poreh ( forest officer) and many more unmentioned heroes who worked with my father at the small district office. and i know at least two gentlemen, complete with 'mafla' and hat.
Someone should start gathering information from their relatives and write something.

Ms Hamid, i love your entries so much so that I have to leave a comment although this is the first time I am doing it. The old photo reminds me of arwah abah, arwah mak and her 13 siblings (Some are already arwah as well). Except for my mom who chose to marry arwah abah and became Malaysian citizen, her other siblings still reside in Singapore until now. Imagine the offsprings... I remember our kampung house in Clemente (if I am not mistaken), huge fish ponds, my arwah Pak Ngah's collection of beautiful birds, ayam serama etc. Your mom looks almost exactly like my arwah grandma. Sadly, although I am only 42 this year, your excellent memory has put me to shame...and my so far pathetic effort to trace my huge family back in Singapore, except for a few, is downright embarassing...but you inspire me and there are still hopes...tq Ms Hamid

Hello Kak Teh, I love your 'mafla' and hat. That's what Abah insist I must have for my first trip abroad. Perhaps we could all compile lots of memories of our parents and their peer group and call it "Invisible Heroes"


Dear Angsaputih,
There's always a first time. I didn't dare do this until I was 64! So there's hope for you.
I do remember the kampungs at Clementi. Someone used to tether an elephant under a shed along that road or perhaps it was before your time.
Anyway thanks for the comment and keep trying.

The image of a kampung just doesn't tie in with my impression of modern-day Singapore. Pardon my ignorance, tapi ada lagi ke kampung kat Singapore? Of course, my images of a Singaporean kampung come only from the old P Ramlee movies.

Tumpang lalu ... Kak Teh, Pak Mail Town Planner sounds macam familiar, I am trying to recall where I heard it before.

I get a strange nostalgic experience reading thru this sharing.

It is like living the P.Ramlee era in an English version.

I know I'm reading English words but I could feel the kampung environment - the warm acceptance, the simple life, the gentle teasings and mostly the carefree days I remember when I was just a kid.

Thanks for this revisit.

I read Rockybru and found you!

Looking at the picture you posted reminded me of my family in Singapore; sadly, I've lost contact with them (after my mom moved on, we 'just' did not make any contact anymore).

I was told my granddad came to Singapore from Malacca as a policeman. They stayed in Kampung Ubi. I believe Kampung Ubi is no more now. I also had an uncle who lived in Teluk Blagah. He passed away; I don't know what happened to my cousins, etc.

Too bad, how much I like how 'efficient' things are in Singapore, I hate what they can do to make you miserable. Had a nasty experience once when I was sent to Singapore for a training: they treat us (my colleague and I), the hotel where we stayed, like sh*t, and as if we are Ah Bengs from Lubok Cina, without money to stay in a nice hotel (a tourist area); or is it because we are Malays from Malaysia? The reception lady kept on insisting that we put in cash deposit (mind you the hotel was booked by my company) for the duration of our stay there. They also asked whether we were from Brunei!

My scooter. Took me round really. To Belvedere School in Tanglin Road for half a day, then off to Teachers’s Training College at Patterson Hill for the other half. Then rush home in the evening to Pasir Panjang Road, and sneaked out again at night for other activities. Yes—that scooter has seen a lot. Damn glad it couldn’t talk. Remember the time when after lectures I couldnb’t find my scooter. I was panicky until I was told that it safely parked --- on the third floor of one of the buildings in the College. Had a helluva a time riding it along the corridor and even worse bringing it down the stairs to the ground floor. Thanks to my mates ! @!#@$@%$@

The kampong house. Seeing the corner of the house, half brick wall, the veranda/porch roof, God—it reminds me of how all of us build that house with blood , sweat and tears – with not a single from any outsiders – because Abah said ‘We can do it “ Let me put it in points : (Oh sorry for invading your space Nor )

• The old house was already ‘lopsided’ and always badly affected by the frequent flood.
• The old roof was in a bad condition with various leak spots during the rain
• Abah---using his ingenuity, deviced a system whereby we use a car jack to replace all the main pillar of the house. I remember how the villagers used to give snide remarks whenever they saw our family working working on the house.
• When they saw the new house taking shape –that shut them up.
• How Mak used the spade to mix cement in the morning so that when Abah got back in the afternoon, we would start cementing the floor.
• How I had to scoop sand from the river at the back, spread them and dry them
• Ours was the first house with half bricks wall and metal window frame.
• Yes—Abah was the brain and Mak (bless her also) was the supervisor – supervising the workers (us that is) because I remember being really told of by her for coming home late to help
• I remember Abah fell from the ladder – quite hard –must have been 2 meters high --- and we all laughed --- until you went to Abah and told us in exact words (really-I remember them) – “ Stop it all of you “ (that included Mak ) (‘ini bukan laughing matter! ‘
• That may well be the first sign of his heart ailment….

Anyway this is long enough. Sorry for creeping into your blog space.

Salam . Your blog is awesome. I am waiting what is the next article from you since your story gave me an extraordinary atmosphere even im just 22 years old .