A few days ago someone asked why AsH has been silent.  Thank you for asking!
Well, AsH is still alive but not kicking.   For the past 7/8 weeks the spouse and I have shared a litany of health problems.  Firstly there was the spouse's dengue, which was reasonably remedied despite the discomfort and anxiety.  But that's how the stoic Scotsman views his ailments, even his cancer.  Doesn't believe in crying in his (Kaliber) beer over such details of ill-health - "must not grumble, others suffer worse than us".
As if to test his resilience, we both tested Positive for Covid 19, about a few days later.  The self-quarantine, the daily reports to My Sejahtera and after seven days, the negative test allowed us to heave a sigh of relief.  We celebrated with our favourite Lontong breakfast at  Seri Talam Cat Cafe, Taman Sri Rampai, with Nasi Lemak bungkus for lunch and kuih Tepung Bungkus for elevenses.
But no, there was no happy ending to this dastardly Covid virus, especially for the Belacan Malay wife of the Wild Scotsman.   She'd developed a constant racking dry cough which went on all day and night causing bronchitis and sleepless nights.  This, they say, is part of the Long Covid scenario.   Comforting to know it has a name! The general advice given was plenty of rest and plenty of water.   That didn't work.  I turned to my very capable and competent Traditional (Herbal) Chinese Medicine, Prof. Liu Xiao Hang at Tung Shin Hospital.

I marvel at the skills of Prof Liu in applying his knowledge of thousands of years of traditional Chinese medicine.  What seems to be a simple act of taking your pulse provides him with much of the information for diagnosing your ailment..  Through my haze of endless coughing, weariness and aches I watch him holding my pulse and considering the message it gives him for deciding on the treatment for an "infection" that has baffled the Western medical establishment since Covid began plaguing the planet.
I watch him thinking hard, looking at his computer at a long, long list in his herbal pharmacy before he decides on what herbs to choose.  He does not prescribe a week's or a fortnight's series of the  same medication.  The first prescription he gives is for three days only.   There are 3 more 5-day prescriptions.   Now it is a 7-day prescription.    Each prescription is totally different from the other, and consists of at least fifteen, sometimes twenty, different herbs.    And each prescription is chosen specifically for the patient according to the state of the patient's health and symptoms on that day.     You could say it is a personal prescription for AsH, according to what Prof Liu can read from her pulse, her eyes, her tongue, and what she says.     It's all too mind-boggling for me to absorb, Long Covid or no Long Covid!!
But Prof Liu will also utilise what Western medicine can offer: he sent me for an X-Ray because he was worried about the lungs.  Over less than weeks, he sorted out the bronchitis and the cough which meant I can stop having to sleep (when I can get a chance in-between the racking coughs) sitting up.
Just last week, he started AsH on his prescription to alleviate another feature of Long Covid - the loss of appetite, extreme fatigue and listlessness.  As I left he smiled, patted my shoulder and said, "Do not worry.  You are getting better."  (I know so.  Slowly and surely I can see chinks of light at the end of the tunnel.  Not the the huge bright light of an approaching train!)
A tough old bird like me does not cry.  But I do wish I could override the norms of our Asian Culture and give Prof Liu a humongous hug.
Professor Liu

Thank you ever so much.
Despite a brain that is still foggy and dense (which I know Prof Liu will be clearing up in time), I write this posting to record my deepest appreciation (BUDI YANG TIDAK TERHINGGA) to two men who  have kept me company and  boosted my spirit through these last few months.  There's Prof Liu.
Next - the other knight in shining armour who took over the reins of minding the house, the cats and the cantankerous (because she's fed-up of being ill) wife .   Other than his allocated (by AsH) tasks of being the Beverage manager, dish-washer, lunch provider, binning-the-rubbish expert and driver; he took over all of Ash's jobs like the laundry and the cooking.  He made sure his crabby wife (who was losing her appetite) ate up what he had so lovingly prepared in the kitchen.  He was rolling out baked beans on toast, chicken carcass stew - our favourite because of the flavour of the boney carcass, baked beans on toast, macaroni cheese, my mother's recipe for sardines  (Sardin Cap Ayam) cooked in lashings of onions, red and green chilis and lemon juice, grilled chili cheese-on-toast, baked beans on toast, corned beef fried with cabbage, red and green chillies, loads of onions served with mash and hot rice ...very irresistible, and digging deep into the freezer for my cache of home-made soups, frozen apple pie, frozen banana cake and Dalcha and ...... baked beans on toast. But there was the evening when I thought I had better stop feeling sorry for myself and AsH decided to fry chunky chips (not the flimsy French fries) which had been parboiled earlier.  We left no chips unturned - somehow my appetite for chips was left intact.    A week later, we decided to indulge ourselves and splurged on Students' Union staple food - chips, eggs, fried tomatoes and baked beans.  Methinks that was a necessary complement to Prof Liu's herbs.
This year,  he is officially an octogenarian and AsH is just 2 years behind him.    What follows next me duck, is to thank you for looking after me, especially all that driving through KL's horrible traffic to get to Tung Shin - sometimes up to 3 times a week,  but especially for travelling and sharing that "less travelled road" (Robert Frost's phrase) with me since the 1980s.
In the beginning : there were two nerds.
We were as different as chalk and cheese or more aptly, as nasi lemak and fish 'n' chips.
The most unlikely couple are we!  Being the parsimonious Scot and the prudent quarter-Chinese, quarter-Bawean, quarter-Minang, quarter-Melayu jati Malay, they realized that two can live as cheaply as one.  They decided to set up house and built an erratic, eccentric, adventurous and bewilderingly happy life together -  as Darby and Joan and like two peas in a pod. 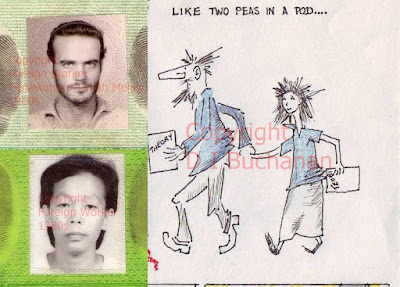 We were both brought up in families that had one thing in common.  Our respective parents were not afraid of pulling up stakes, crossing borders and oceans (in the case of Iain's family) to forge a different life for their families in places far away from their familiar homes.  The two of us could not deny what was in our blood.  Before we got hitched, we sought and experienced "hidup berdagang di negri orang" or in today's parlance, as foreign workers.  In the 1960s he went to Persekutuan Tanah Melayu (as recorded in his green Identity card) to teach in UM and I ventured into Brunei to teach at Sultan Hassanal Bolkiah Teachers Training College. during the late 1970s.
We were as snug as two bugs in a rug in our little abode at Oxford Avenue, Leicester.

He "escaped" from decades of a mind-sapping academic career at University in the late 1980s and began a new life growing our vegetables in his allotment, drawing his illustrated book  Fatimah's Kampung and fossicking for books in the second-hand and charity shops with his wife tagging along quite happily in this alien (for a Singaporean) past-time.  He gave her free rein to do whatever she fancied, like wandering around in Leicester's charity shops, second hand-book shops on her own, delving into the fascinating world of part-time employment in factories, a plant nursery, Leicester Royal Infirmary and making new friends among her working class mates.  Oh, she also enjoyed cooking and sewing.  These were all the things she wanted to do after nearly 2 decades of earning her crust as a teacher.  I have had enough of teaching, teachers and bureaucrats in a profession which I think was losing its main objectives of teaching and guiding the young.
But most of all, we enjoyed some great walkabouts - not as typical tourists but as students trying to learn from and of other cultures.
But we learned a lot from visiting India, four times for the spouse and twice for me.
But nearer home, we entered London only for the purpose of supporting causes close to our hearts that still matter to us today.  We walked for Palestine, for the two Intifada and Bosnia.  We also marched twice against the war in Iraq and  against President Bush's state visit to UK at the height of the invasion of Iraq in 2003.
But our happiest walkabouts were in Northumberland - the ones we shared with Peggy, a good friend and guide,  a loving, lovely and adventurous  Aunt/Aunt-in-law.  She was that way too with our friends (local) and my former students and relatives from Singapore.  She was always so welcoming, a warm  and generous hostess.  She often gives her departing guests presents of her home-made jam.  Bless you dear Peggy.
The biggest wandering of all for us was the semi-move to Kuala Lumpur in 2007.
The main reasons for the move were to be nearer to our families in Malaysia and New Zealand.  But it was heart-rending to part with dear friends and Peggy.  She passed away at the age of 83 but we were there to be with her towards the end and to see to her last journey to be with all her beloved dogs.
Living in KL was a bag of mixed blessings.  Some were painful for it removed a lot of scales from our eyes.  But we are mostly thankful, for here in Kuala Lumpur we could stretch our thoughts and writing and it also gave us the best health care (at Tung Shin) - care that we could never receive in Leicester.
However I believe in searching for the good things that life can offer.
Seek and you shall find.  Amongst other things, we discovered this at Sri Rampai, close to where we live.
However, this is the most beautiful sight I've ever seen - and I discovered it in Malaysia!
But, we do miss our kampungs where we came from.
Oh what it was like to be young and happy-go-lucky.

A really nice story.
Keep it up.