64 years ago on August 31 1957, in our kampung house at Pasir Panjang Road Singapore, we were listening to the radio.  When the Union Jack was lowered and the flag of Persekutuan Tanah Melayu was raised, I saw the pride and glow on my Abah's face which said, "At last my country is free".  But then the tears began to flow - they were not tears of joy because he said very sombrely, "What will happen to my people?"

Abah, today at 3 pm. 16 August 2021, your daughter cried as she listened to Prime Minister Muhyiddin tendering his resignation.

They were not tears at the demise  of a mainly Malay-led Government that had to attend to a pandemic (a trauma that this country has never seen before) but they were bringing us close to the light at the end of a dark, dark tunnel.

My tears are like yours in 1957.  What will happen to my people, and not just Malays?

We spiked the Malayan Union, we recovered from the Japanese Occupation, we beat the Malayan Communist Party insurrection, we learned and re-booted ourself after May 13.  But we were beaten by greed, envy, lust for power, pride and bodoh-sombong of our fellow Malays.  For me the one courageous voice of sanity came from Tony Pua.  I may not agree with his politics but he has the spirit and the honesty to be able to reconcile his political affiliations, which are in opposition to the Government, with the needs and priorities of his country.

Here's a simple story with a moral message from my old Malay school textbook. 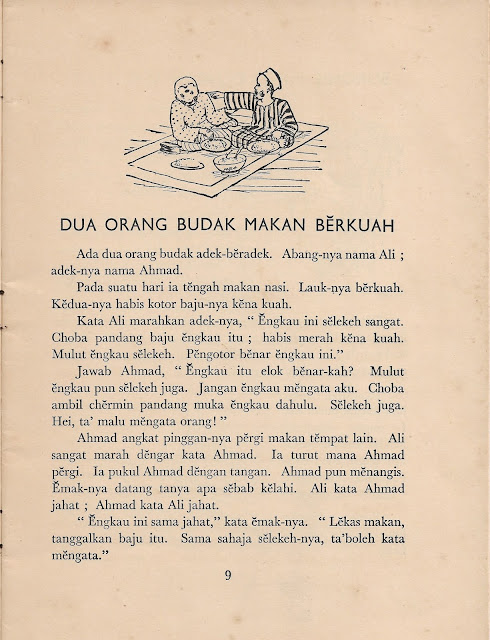 But the Malays I fear do not have an emak and abah to guide and discipline them.

"Lekas makan, tanggalkan baju itu. "  I doubt that our Malay leaders and leadership will dare to do that. Their hands are so filthy, like Lady Macbeth's hands ; and nothing will ever wipe it clean.

Abah, this is what we Malays look like today.

All the King's horses and all the King's men will not put the Humpty Dumpty Malays together again ..........  perhaps only after the worms have had enough of them.

Our tears are futile.