As for the picture on the right and the caption below, it came from an article in a magazine of picures of children and their quotes which I had cut and pasted into a Scrapbook that I kept during my years of teaching in Brunei from 1978-1984.


If there wasn't any love there would be madness.


In 1983 I took the first of my two trips to India, accompanying the spouse on his research work during his sabbatical.
I was not prepared for the poverty that existed in India.  More so when one noticed the obscene gap between the rich and the poor.  The poverty that surrounded me was quite overpowering and so despairing that you almost lose your sense of humanity.  When a group of child-beggars gathered around me at Bombay's Victoria Terminal ...... 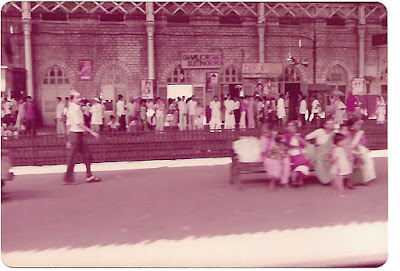 with their big doleful eyes saying, "help me, I need food", I broke down and yelled,
"Go to Rajiv Gandhi!" He was then the PM of India.

That was my breaking point after being constantly confronted and assailed by the poor, especially the children and women on the streets of Bombay.

Got back to my job in Brunei, and I just had to take a picture of this billboard along Jalan Gadong on my way to Maktab Perguruan Sultan Hassanal Bolkiah.


When I got home to my flat at Anggerek Desa, the very next day, I wrote this poem which took me just about ten minutes to write.


With the odour of shameless poverty in India still reeking in my psyche, I wrote of  "the hungry Child (who) dissipates into an echoing hunger and craves for carrion's share".  In my memory I recalled a scene at a railway platform of a comfortable-looking Indian resident throwing his unfinished bhaji to a beggar squatting at the side of the wall.  The beggar grabbed the leftover.  It was like throwing rejected food at a stray dog!

Abah would get us the Straits Times Annual every year.  One picture from the early 1960s (I think) stuck in my mind for years, that of an exhausted, weary and weather-beaten fisherman from Dungun with his catch, which I think could provide just one meal for  his family and a liitle more which his wife could turn into kropok to bring in some cash.  I finally managed to get to Dungun in 2019 and from what I observed in that fishing town, I reckon the children of that fisherman have done quite well in the space of 59 years.  But of course, the Malaysians on the 'multiracial' West Coast and especially the urbanites,  have progressed by leaps and bounds in comparison to the Malays on the East Coast.

Today, the child who wrote that little quote about love and madness ......

........ might think the world has become a lunatic asylum.  Or maybe not.  Maybe it's just a cynical and pesimistic AsH who has seen too much and been too long on the road.

But something wonderful was in store for AsH.

When I started blogging in 2008, I encountered several like-minded spirits, good souls like Ros and her daughter Catharsis aka Dorah.  Early this year we met up with Dorah and just a month ago we had the pleasure of the company of her Mak and Abah, Ros and Kadir.  Dorah has been like a guardian angel, and a lady-knight in shining armour for us during the Covid 19 MCO.  But after several months of knowing her she has turned into our "me duck" ( a term of endearment used by the good folks of Leicester).  As a result I think she is going quackers hoo hoo!


On Sunday 20 August, Ros and Kadir and Dorah took the two geriatrics for a Malay breakfast at Nasi Lemak Tanglin followed by a stopover at Tugu Negara. We are not one for monumental structures but I must say it was quite breath-taking.

I just wish Abah and his mates, the LEP (Local Enlisted Personnel) in the RAMC or Royal Army Medical Corp of the British Army could have seen it too.  That generation sacrificed a lot before, during and after the Communist Insurrection from 1948-1960.


And so, we got home to Setiawangsa to partake of hot lemon tea brewed by a genuine English bloke. 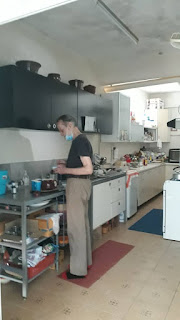 We had a warm cosy tea-chat  on the verandah facing Iain's garden. 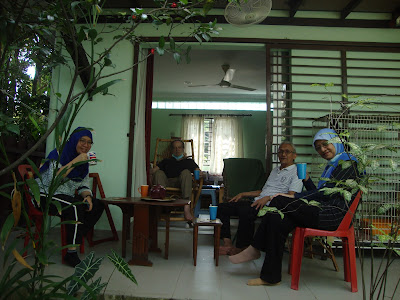 He was quite chuffed about how Ros and especially Kadir, were the only guests we had who really appreciated his "wild garden",  a habitat for birds, toads, tree shrews, butterflies and our nerdy cats.

But Dorah landed herself in hot soup/tea :

She had nicked Uncle Iain's personal Union Jack mug!! Even AsH has to ask his special permission just to clean that tea-stained mug.  One day that mug might be classified as racist because of the (late Empire's) flag.  After all the BBC have banned quite recently the lyrics of "Land of Hope and Glory" and "Rule Brittania" for the Last Night of the Proms.

On that day, thanks to Ros and Kadir and Dorah we savoured the meaning of that quote.

Merdeka and Freedom would be futile if we cannot translate it into friendship, sharing and respect for one another and the values that each one of us hold dear.

Here is a fitting image to end this posting.

With the Tugu Negara behind you, my generation is passing on the baton to you and your generation of kindred spirit to preserve and protect what your forefathers and foremothers have sacrificed and upheld for their future generation. 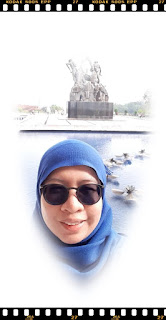