On September the 9th, I was ridden with regret.
https://anaksihamid.blogspot.com/2019/09/im-so-sorry.html


But by October 29 my cup runneth over - because finally I met my former Primary School teacher, Mr Kempson Wong from Pasir Panjang English School, Singapore - face to face.  He was my class teacher from 64 years ago (1955) when I was just 11 years old.    It was not the last time I saw him - I met him briefly in 1968, by which time I was a young adult, a teacher, just like him.

He was a fantastic, unforgettable teacher, and in 2012 - having not seen him for 44 years - I wrote a posting for him.
http://anaksihamid.blogspot.com/2012/09/remembering-mr-kempson-wong.html

Seven years later, the fates were kind to me.    I met up with Mr Kempson Wong once again - and this time I met his lovely wife Catherine too.


She not only gave me a bottle of her absolutely divine Almond Florentine biscuits.  I also took home with me the recipe and the special Florentine flour.    Iain and I are still squabbling over who has had more Florentines than the other.  Thank you so much Catherine.

My ex-teacher is so lucky (and so happy) to have Catherine as his soul mate - a finer couple would be very hard to find.  When I got back to Kuala Lumpur from Singapore I wrote him a message;
"When Iain and I grow up we want to be just like you!"

Because of "circumstances beyond his control" Iain was unable to enter Singapore to meet my former teacher.  In his place I passed on a gift of his book  "Fatimah's Kampung" to this exceptional teacher of mine.

Here's something I managed to cobble together to celebrate my reunion with Mr Kempson Wong - something for our family album.

At 85 years of age, Mr Kempson Wong still plays tennis twice a week.  His voice is just as strong as it was in 1955.  His walk is just as straight and sturdy.   And there is still that twinkle in his eye.

He was my teacher 64 long years ago - but I remember his classes like they were yesterday.    He is indeed hard to live up to.   They just don't make people like him any more.

But I discovered something new about him.  He plays the piano - and he does it so beautifully.  It was something he decided to learn when he retired from his profession.   I shall never forget my ex-teacher's serenade to celebrate our meeting.

I asked him to play for me "The Ash Grove" .  Then he followed it with this.

I wished I could have recorded his version but I guess the original song will have to do.

After he had ended the repertoire, he stood up, looked at me and smiled and sang :

"My memories of love will be of you."

What else could  I do but collapse in tears.  Thank you Sir.  I always knew you were special.  I shall treasure this morning  to the end of  my  days. 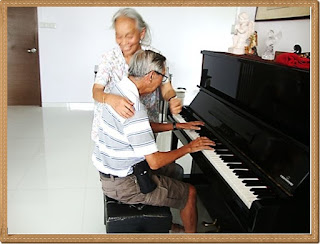 The dream begins with a teacher who believes in you, who tugs and pushes and leads you to the next plateau, sometimes poking you with a sharp stick called truth.  (Dan Rather)
Posted by anak si-hamid at Monday, November 04, 2019