He must have seen me lingering by the classroom door where he was teaching  and he said out loud for all to hear,  "Maznoor, you've heard this story before.  Now get back to your class."  When Mr Wong gives you an order, you jump!

He was fierce, and one look from him would have us shivering with fear.  It was a cheeky habit for us to lean back and wobble on two legs of the chair.  For doing that, Mr. Kempson Wong would parade us in front of the class - and make us stand there balanced on one leg.  "You shall do what you did to your chair, using only half of what you've been given."  And I was the only girl to be put on parade.

But he was a great narrator of stories.  Our English lessons included 'story telling'.  Mr Kempson Wong would  sit on the chair, with all of us kids seated on the floor in front of him, and he would tell us a story without having to refer to a book at all. He did it so well, modulating his voice - the volume, the inflections, the pace and the pitch - according to the tenor of the tale.  His eyes and arms and hands and shoulders would move with the mood of the story.  He had us glued to the floor,  all eyes gazing in attentive rapture at his face.  What a teacher!

Our favourites were the stories from Greek mythology.  And the story of 'Jason and the Golden Fleece' had me skulking to Mr. Wong's next class just to hear him telling it all over again.  What a nut-case!

He was strict, he was fair and he made us push ourselves to the limit - especially for Arithmetic.

Besides being my class teacher he was also in charge of my House, Keppel House.  I used to tag along behind him like a happy puppy during House Practice.

In the autumn/winter of one's years we tend to look back on our springs and summers with nostalgic joy.
My one regret was my failure to say thank you to teachers like Mr. Kempson Wong, Mr. Chia Wai Chee, Mr. Chong Khim Siong, and Mrs. Tan Choon Lan.    In 1968, during my second year of teaching I went to Kaki Bukit Secondary School (if my memory serves me well) for a meeting.     I entered the Teachers' Common Room and there he was, Mr. Kempson Wong, right there in front of me!  We looked at each other, stunned.    And what did he do?

He waggled his finger at me - just like the time he shoo-ed me to get back to my class - and  in his unforgettable crisp and powerful voice, he said,  "You are Maznoor! What are you doing here?"  The smile on his face was full of pride, just to see his ex-pupil from long ago.  I must have beamed like the bright morning sun - just to see my teacher again.

Like a magpie I treasure the memorabilia from days in Pasir Panjang English School.  And here, from my Record Book is  Mr. Kempson Wong's  notations on 11 year old Maznor bte Hamid when she was in Primary IV 1955. 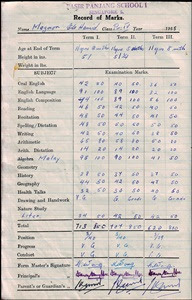 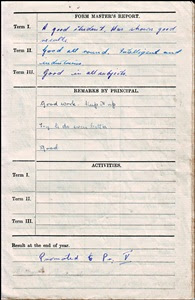 What a lovely reminiscence, of days when teachers were teachers, not salaried workers, and when there was no racial divide.

Your comment is apt and so telling. Teachers in those days were not just professionals but caring and loving for the young ones in their care, whatever their colour.

I was educated by such teachers and I would like to think that I have done the same for those who went through my classrooms.

so the real name of this nom de plume of anak si Hamid is finally out in the open. You were in Spore?and a female at it too..I was In Spore too and thanks to late Tun Razak who saw that there is no future for Malays in Spore offered us to come back to Tanah Melayu. How very right he was and I am forever grateful

Beautiful story Ash :) I am one of the lucky ones to have you as my teacher. To Sir With Love sums it up, thank you

For more details about this Malay Fe(male) Maverick, do look up my posting "An Island and a Peninsula", October 2009.

All Malaysians should be grateful to be where and what they are.

Thank you for stopping by.

I think we're both lucky to have known each other.

After all, only last year you did a great job of pruning our bougainvillea bush. You are thus forgiven for all your past mischief

Never a wall between us and the teachers then....
hahahaha...wearing a uniform then makes you a an Avenger of those days....
Chia Wai Chee...he never failed to remind me what a good student I was before my sister went to secondary school.....my answer ? ...used to give him a " dunno' look...hahahaha

Love that sentence "never a wall between us and the teachers".

They were first class teachers and Mr Chia Wai Chee was one of them. Remember how we paired him with Miss Anne Koh? Oh, those were the days AND the Teachers.

Hello! Loved reading your blog :) I just moved to Pasir Panjang, with a view overlooking the former Pasir Panjang English School. Wanted to learn more about the history of the school and this area, and enjoyed reading your articles on 1950s life in Pasir Panjang. Thank you for memoralising it all! Looking forward to reading more articles, stay unapologetically spunky!

What a nice comment on my beloved Pasir Panjang.

Enjoy the school and it's ambience. If you get a chance, walk up the magnificient wooden staircase to the upstairs where the Principal's Office was!

You must be living up on the hill just behind the school. You lucky devil!

But no, it would break my heart to watch the desolation and obliteration of my childhood.

Look out some evening and you might see the ghost of a scruffy kampung girl swinging like mad on the swing.

Chin, you have yourself a good life in my Pasir Panjang world.