My favourite past time is rummaging through my collection of old school text books.  This particular book has always been my favourite because I actually used it during my limited Malay Language lessons at Pasir Panjang English School. 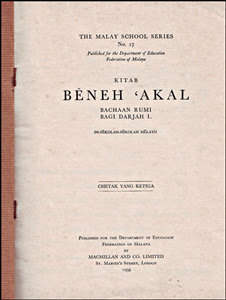 You see, it's not just a Buku  but a  Kitab.  Buku has many attributes  It can be a joint of the ankle (buku lali) or the finger (buku jari).  There's also buku benang, buku bicara, berbuku and so on.  But a Kitab has only one meaning : a religious book, a piece of Scripture.  Hence reading and learning of a non-religious nature is also a sacred task.  Furthermore, it wasn't just Kitab with a number attached to it.  It had been given the poetic name of Kitab Beneh Akal.

The  word akal is rarely heard or used nowadays.  Fikiran seems to be the choice.  More and more in our schools and daily life, thinking is not allowed.  Schoolchildren especially  and  adults as well, are guided, lectured, advised, compelled - and they call that learning!

Akal invokes intelligence.   Akal requires understanding, common sense, discretion, and reasoning power - all of which separate man from beast.  But I find this attribute most meaningful.  Akal also means gumption.  And gumption is the ability and determination to decide what needs to be done and to do it.

"Innocence of Muslims" is just another deliberate act of provocation by the Islamophobes.  The video has been circulating since July and publicised to coincide with 9/11.   Again, Muslims jumped at the bait -this time thrown in by  a cock-eyed Coptic - Christian  fanatic from California.  There are innumerable hate videos and writings against Islam and Muslims on the Internet.  If each time,  Muslims  react by going on to the streets and yelling and burning flags, all it does is damage Islam's  dignity.

Malaysia has  a well-off and well-heeled Ummah in comparison to many other Muslim countries.  Young Malaysian Muslims who have been educated at home and also overseas  (at the Rakyat's expense) -  stretching from North America to Europe and Egypt and Jordan and Yemen and Russia and Australia and New Zealand - should be tapping into and utilising their Akal to respond to and to counter not only these silly videos, but also the much more challenging and mischievous diatribes from Western Academics and the Western Media like Tom Holland's and Channel 4's "Islam: The Untold Story".  This of course is hard work, involving a long and quiet slogging and will not attract any glamour or publicity from the Media.

This is what Gumption aka Akal is all about.

If Malaysian Muslims can only react as Pak Torot and can't even agree on which road direction to take for their demonstration; then indeed  this statement is justified.   "Islam is a great religion, it's a shame about the Muslims."