: Saying Sorry from a star


The spoken language , in its various intonations,  will immediately signal to you the nature and sincerity of a statement.

For instance, after committing an error you can respond orally with

However, any form of written text is a bit more complex to dissect, to tweak out the hidden deception and half-truths - to look beyond the denotations of language to the connotation.  And of course the insertion and placing  of images in the text and layout of any print and electronic media  can be used as a subtle and clever type of innuendo and insinuation.

The Star for example, which prides itself on being ..... 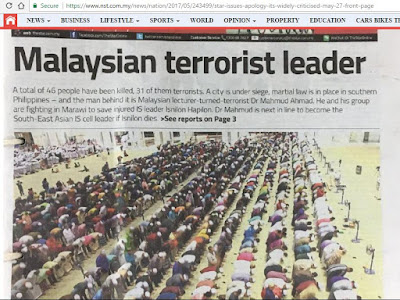 It could only lead to the inevitable anger and disgust from the Malay-Muslims ( the bumiputra and 61.3 percent of the population).  Conflating terrorism with an image of Muslims at prayer is quite unforgivable and cannot be anything else but mischievous.  The management and editors at all levels of authority in The Star cannot claim that it's due to ignorance or an innocent 'coincidence'.

The pathetic and self-serving apology that followed made matters worse.

And so, after that headline and the limp apology, can we declare "Three strikes and you're out!!" ? 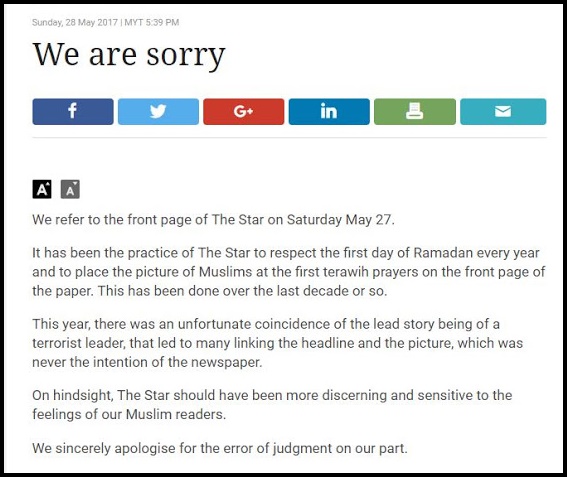 How pathetic is this sorry state of an 'explanation' ?

Paragraph 3:   Nobody but a cretin would not link the message and intent of the headline and the picture.  Do the powers-that-be in The Star think so little of the Malaysian public's ability to assess the carelessness and callousness of the design of that front page?  You don't need a degree to recognize the malice, whether it's intended or not.


Paragraph 4:   "The Star should be more discerning and sensitive to the feelings of our Muslim readers".

What an unfortunate oversight!  Or was it?

Would some of  The Star's readers be irate if this collage  appears on the front page of  "Malaysia's No 1 Local English  News Portal".

Notes for the above  Combi-Image


Here's an extract from the third image at the bottom.

" The urban areas - especially the capital Kuala Lumpur ......... George Town, Malacca and Petaling Jaya enjoy a quality of living very similar to that in developed countries.

However incomes are still distributed unevenly. For instance the wealthiest 20% of Malaysians control 53.8 per cent of the wealth while the poorest 60 per cent  of the population controls just 21.3 per cent. ..............  Disparities exist along both geographic and ethnic lines.  In general, the Chinese population, which traditionally lived in urban areas and been involved in small and medium-sized businesses or employed in various industries has had higher incomes than the Malays,who often live in small towns and villages and were traditionally engaged in agriculture. .......... Peninsular Malaysia, where the majority of the population lives, has much higher standards of living compared to East Malaysia."

Being discerning and respectful of  people's sensitivities has always been a commendable trait in this country that gave shelter and sustenance to those who came to her shores for the last 250 years.   But standards of respect for our differences have fallen drastically - thanks to the Internet, Twitter and Facebook which allow neanderthals and cowards to flaunt their bigotry and double standards.

I recall these recriminatory words from Dato Seri Wong Chun Wai, Group Chief Editor of The Star in his column when he challenged the rantings of a Malay racist group.


In the fourth paragraph of his column, Dato Seri Wong wrote " Obviously, it needs to be reminded that under the definition of sedition and seditious tendency in our legislation, anything uttered which upsets a group of people along racial or religious lines is seditious.  The term may be broad but that's how it goes, people. "

Exactly!  That's how it goes  Malaysians!!   Especially when and if you believe that "you belong to Malaysia" and not the proprietorial  "Malaysia belongs to us/me".

1.  A few days ago I came across this article in The Guardian which complements the issues that arose from The Star's  'unfortunate coincidence' of May 27.  Extracts from the article  will do a better job at making a comparative analysis of  the journalistic style of The New York Times and The Star.

Worse than a frontpage that puts a terrorist news headline next to a Ramadhan prayer photo are terrorist attacks in Ramadhan.