The setting:  the year is 2054 somewhere in the suburb of Bruceville, just 120 km southeast of the little town of Kangawoombaroo in a secluded outback of Australia.  A little boy is sitting on his grandpa's lap  'flicking' through the old man's  album on the computer.  Grandpa (GP), who lives in Wankerton, was staying over for the weekend to spend quality time with his eight year old grandson (GS).

GP (pointing at a picture) .... And there's your Grandad in Malaysia in 2016, protesting at them chopping down trees.     ( He often went there to collect the evidence).

GP   No, it's nothing interesting  (as he clicked off the photo).  Hey stop that!  ( when GS clicked back to the photo). 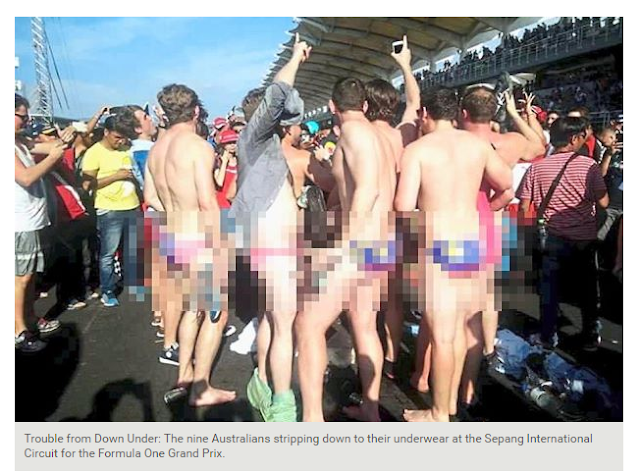 GS  Hey this is cooooll !!  Which of those arses ... ouch! (GP smacks the boy for using the a-word) is yours?  Daddy told me how you went to Malaysia to watch the Formula One Grand Prix.....    But he never told me about this!  Wait till I show this picture to my mates in school. Crikey!    I can tell them what a brave hero my Grandpa was in his younger days!!      Who are the others?

GS:  But Daddy told me one of your mates then was an adviser to the Minister of Defence Industries.      Was he one of them?   Wow, if only our Cabinet Ministers today had the same cheek.

GP   Hmm, yes... hmmhh  (feeling and looking pink with embarrassment, like the nude pinky skins in the photo ).   Look skipper, let's look at another (as he clicks to an image of a Malaysian crowd)

GS   Granddad Granddad!  These people look shocked - but some seem to be yelling and screaming with joy!  Are they going doo-lally over the Grand Prix - or are they just delirious to see us in our underpants?  (clicks to next picture)

.... And hey!  You got a picture of the newspaper story too!    But I think their newspaper made a mistake calling them undies.  Undies are only for girls.  Or were you and your mates wearing girly underwear?    Ha ha ha, what a scream!    You really have the guts man, just like our ancestors who cleared the forests and chased out the Abos.  (Abo is an offensive term referrring to the Australian Aborigines)

Just thought of something grandpa - it's quite funny.  If you reverse the u and  n in undies, you get the word nudies  (as he rolled  around in rollicking mirth on grandpa's lap)

GP   Get off me, you silly b..... r.  You are becoming more and more obscene and rude.  You have no respect for people.  (GP stormed away in anger and disgust).

GS   Yeah grandpa, guess where I got this from (as he tripped away singing 'grandpa's undies, grandpa's a nudie, grandpas's pinky butty).


NB  I do apologise to the apes on our planet for humankind's  abuse of the word 'apeman'.
Posted by anak si-hamid at Wednesday, October 05, 2016

'Budgie smugglers' are swimming trunks. However look at the words carefully. A budgie is a SMALL Australian bird, pretty sometimes but nothing to show off. 'Smugglers" are self-explanatory - you want to hide it if it is a small bird!

Most local newspapers (and some politicians) are quite immature - those guys (also immature) stripped down to their swimming trunks - so what. They get millions of dollars of publicity because some people said they took offence.