When Haron bin Mohammed from Muar/Batu Pahat  married my sister Maznah in 1965, my Mak instructed us to refer to him as Abang Long, shortened to  Bang Long because my sister is the anak sulung, the first born.  He is the only "Abang" we have in our family.

As for Iain, he always refers to Haron, his brother-in-law, as "my abang from Batu Pahat" .  We were so at home in their Jalan Jengkeng house whenever we popped in from Leicester (from the mid Eighties to 2007) to spend time with my mother and the rest of the clan.
And in those days Bang Long's wife makes super-duper teh tarik!


But what really united the two families was gardening.    Just 2 days ago, in the e-mail, we  received this:

The spouse's grandiose plans of getting rich (in our dotage) rest completely on his date tree in our garden - which came from a date seed from 4 Ramadans ago, which was then sent to Bukit Mulia for my sister to nurse and nurture until it grew to half its present height.  (It just might produce dates before we reach our eighties.)

It's the same old ploy from both the Scot and the Muar man - to get the two sisters working in the kitchen ..... and they will then devour by the plate full, the capital and the profit - a typical case of AliJohnny enterprise - or maybe Ali-McJohnny ...

But back to Bang Long.   It's often said that a man (or woman) is made up of more than the sum of its parts.

I recall the first time I met this man -  who was to be my sister's husband - when he came to our kampung house at Pasir Panjang to meet his future father-in-law. I don't think I have ever seen such a nervous scaredy cat!  Even his voice trembled when he spoke to my Abah.

It all went fine and Haron bin Mohammed became a full-fledged member of Abdul Hamid's family.

From then on, most of the parts were made up of births and deaths and marriages and more births, sigh....

But that was not all.  For the two sisters and their lesser (?) better(?) halves there were several travels and adventures to share  - three times in England, in Scotland, in Wales and in Spain.

On that trip, Iain took us for a drive to Dervaig.  On the way, the car broke down (the wishbone snapped). He hitched a ride back to Tobermory to get a mechanic.  The three of us waited by the car and soon we were surrounded by Isle of Mull natives, all very suspicious of these strange outsiders hanging around a deserted road in the middle of nowhere.

They were natives of the four-legged variety  -  a flock of sheep - who kept on booing and baaing at the Haji and Hajah and the female Malay maverick.      Well, the spouse got back with a very kind garage owner, who welded the "wishbone"together so we could drive back onto the ferry and back to Oban for a proper repair.      And while we were waiting there, my dear sister scrumped some apples off a tree by the bridge.      (Kids in this part of the world used to "scrump" apples a lot - much to the anger of the owners!)

From Scotland the intrepid four continued their journey to visit Hadrian's Wall in Northumberland.  As our driver and guide was a typical Scot, he made sure we boarded at places where we could get our money's worth and that meant Youth Hostels.  We never grumbled about that - it's very sensible.  Sometimes we got to stay in grand old houses (the Loch Lomond youth hostel was a huge stately home that belonged to a Scottish tobacco baron) and in the most picturesque locations.  We did our own cooking and dined in lovely oldie-worldie rooms.  Remember the dining room at Oban Youth Hostel?  There was a table for 4, with a lovely view overlooking the sea.  We made the lads chope  (reserve) the table while the lasses got on with the cooking.  Very kiasu but it didn't work all of the time.  Some German tourists got there before we could.

But the piece de resistance of this trip (especially for Bang Long)    ....

We drove back and forth along this B road looking for the Hostel.  We kept on discovering the sign for the village Twice Brewed but no Once Brewed!  Tempers were getting frayed in the car - we were all trying to be the driver (except my diplomatic sister), while the driver himself was getting more and more agitated.

Well, while doing this posting, I discovered the reason - it all boils down to a peculiar English idiosyncrasy - the desire to keep foreigners confused.

So we can't blame the driver's sense of direction.

Back in Leicester, we got you working for your supper at Iain's allotment. 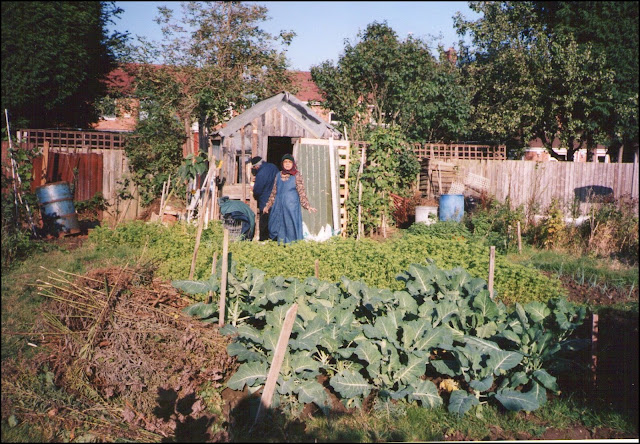 As you both were such keen gardeners, that morning gave you much more joy than shopping at the City Centre.  You both did plenty of digging: Maznah had the joy of lifting the freshest potatoes she's ever seen (the potatoes are just behind the broccoli in the picture).  But she had to contain Bang Long's desire to repair Iain's shed - he's a DIY fanatic.

I almost forgot : when the two of you participated in the 400,000 strong Anti-War Protest in London.  Remember when you both were resting with your placards at Piccadilly Circus?  You were surrounded by cameramen snapping your photographs - they were quite taken by this elderly Muslim couple who took the time and the effort to demonstrate their stand against the War on Iraq.  I guess there must be many pictures of you two somewhere in the ether. Aaah, two celebrities from Malaysia!!!


We had loads more adventures, like the salt in the tea instead of sugar and how we had to have the leftover nasi lemak from breakfast  for  dinner because someone forgot to pack the tin opener!!

But I shall leave all those other memories for you to share with your children and grandchildren.

Bang Long, at the beginning of  your eighth decade we want to jot down  how much you have achieved  in your time - to capture the total sum of this Muar man - not just the isolated parts.  You (and Maznah) were great parents.  A humble couple from humble beginnings, you were adamant that your children should not turn into kacang lupakan kulit.  Before Maria left for university in Liverpool, she was told  "Ingat, kau 'tu hanya anak cikgu", and she has kept true to your reminder.  When Mahzan, who was then ( late 1980s) a medical undergraduate at UM, went to the NUS Hospital to see to his Tok Mok, he noticed an old lady in pain and looking worried.  He went over to her bedside to console her and it helped her no end.

You brought them up to give of their best - for both this world and the hereafter.

They were always made aware that it was duit  rakyat that got them to where they are.

If there's any one image of you that we can recall with fondness, it is this.

I guess that's all I can say.  Many Happy Returns Bang Long from your two weird in-laws.

Thank you for sharing your time with us and for understanding and accepting our foibles and inadequacies.

I remember how you like Effendy.  This song was recorded many, many years ago from vinyl to cassette.  Three years ago I decided to transfer it to a video and here's my crummy handy work for you to enjoy and cry over.