The Mantle of Victimhood

Aren't humans ever so clever?  In this 21st century, we have made boundless progress in technology which, for instance, enables me to do what I'm doing now.  We can communicate ideas, emotions, thoughts, knowledge, insults, hatred, bigotry, hypocrisy, self-righteousness and ignorance simply by tapping on a keyboard or switching on to gadgets like TV and smartphones.  However this can become too overwhelming for a geriatric dinosaur like me.

It's coming to the end of 2015.  Here in the cold of Leicester, escaping the heat (political and religious) of my Motherland, I'm so glad to be in my 70s and not living my twenty or thirty something years.  I was talking to a young employee of HSBC in Leicester just last week.  A graduate, he considered himself lucky to have his present job even though the salary was pittance.  It was so low that he was not even 'eligible'  for paying back his study loan.  (You have to earn at least  GBP22,000 per annum before the debt-collector knocks on your door.)

I 'take off my hat' to those Malaysian  graduates who have ignored or reneged on paying back their study loans even though they're living and working in well paid cushy occupations.  What cheek!  ("Apa aku peduli!  After all the politicians are raking in duit haram."  What a pathetic, self-serving excuse!)

I was once told how the Chinese have to pay up all their debts before the advent of Chinese New Year otherwise it will bring sway or bad luck for the following year.  As for Malay-Muslims they are very strict and punctilious about paying up their Zakat and Fitrah - if only they could apply that  principle and stricture to settling their debts and other pecuniary responsibilities before Hari Raya Puasa!!

However for most parts of the world they are in line for a lot more sway coming their way and certainly Malaysia will not be spared.  But this has nothing to do with luck or superstition - it's simply greed, perfidy and more greed.

This being the day after Christmas, we get this extract from the Archbishop of Canterbury's Christmas message. 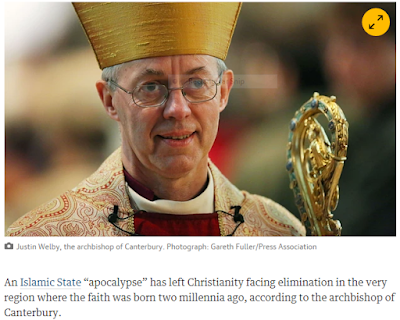 This fear of Isis and Islamic extremism and distress for the fate of Christians and Christianity (which has also recently echoed in Malaysia) have been bandied about for the last few years by Christian leaders, politicians and has even touched the heartstrings of HRH Prince Charles.

Apocalyptic suggestions like 'extinction',  'extermination' have been referred to by Christian pressure groups like the Catholic Charity Aid to the Church in Need.

Academics like Rupert Shortt write about 'Christianophobia' and he states that ''Exposing and combating the problem ought in my view to be political priorities across large areas of the world."


Claiming that Islam was a sect, the African nation of Angola becomes the first country to ban Islam, Muslims and has shut down the mosques in the country.

Concerning the ban, Angolan President Jose Eduardo dos Santos said Sunday : "this is the final end of Islamic influence in our country."

The above extract is taken from World Bulletin 3 September 2015.

And just for your information :

In addition, Angola is also a a rich hunting ground for Christian Evangelists.  For example, 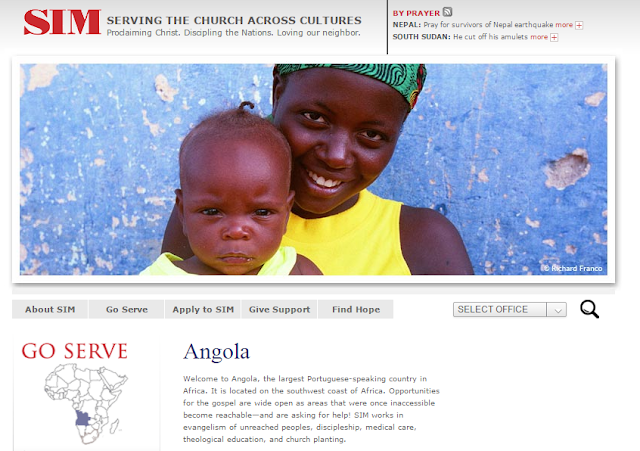 Such Christian enterprise in Angola and in many other countries and cultures of the planet should at least help reassure those Christianists suffering from "Christianophobia".

Let's flip the coin and consider this:

Firstly, included in the Archbishop's message was another by Britain's chief rabbi, Ephraim Mirvis 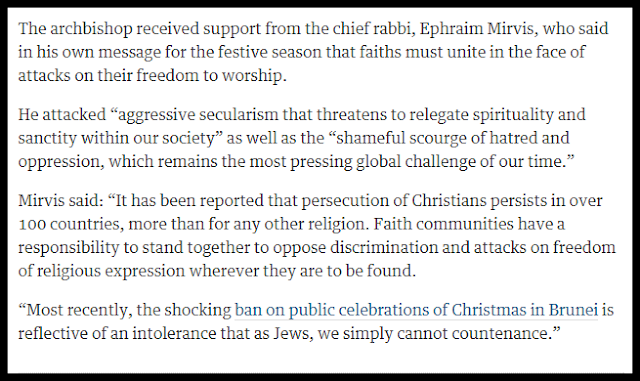 Chief Rabbi Mirvis somehow is quite incapable of seeing the elephant residing in his room.  That elephant is the Judaic-Zionist-Israeli occupation and tyranny in Palestine.  But then, the Christians, the secularists, the agnostics, the atheists, and the neo liberals are also culpable in that very selective oversight and blindness!

Secondly,  here is the gist of this article from Christian News on Christian Today 21 December 2015  by Jeremy Moodey .
Read : http://www.christiantoday.com/article/should.we.really.be.worrying.about.middle.east.christianity/74281.htm

This article outlines five facts to refute all that "doom and gloom".

No 1: It is an exaggeration to say that Middle East Christians face extinction.

No 2: Many more non-Christians than Christians face persecution in the Middle East.

No 3: There is nothing inevitable about Christian flight from the Middle East.

No 4: Islamic extremism is not the only threat to the Christian presence.  I'm quoting this for the benefit of the many ostriches with their heads buried in the sand.

....in historic Palestine, where Christians accounted for over 20 percent of the population in 1948 but now total less than two percent.  But this decline has had very little to do with Islamism.  Three years ago a CBS News report noted that the main reason for the decline was actually the political and economic hardship caused by 45 years of Israeli occupation of East Jerusalem and the West Bank.  Israel was so incensed that the Israeli Ambassador in Washington tried to have the show pulled from the airwaves.  Even in Gaza, controlled by Hamas, Palestinian Christians emigration is driven more by the trauma of Israel's eight-year blockade and regular bombardments than by Islamist government.


No 5: Middle East Christians themselves do not want favourable treatment. 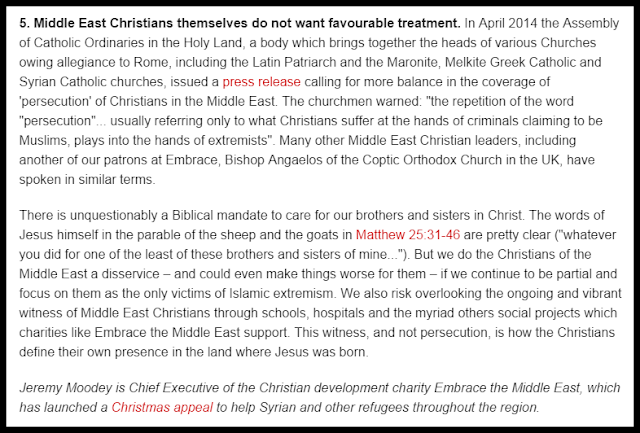 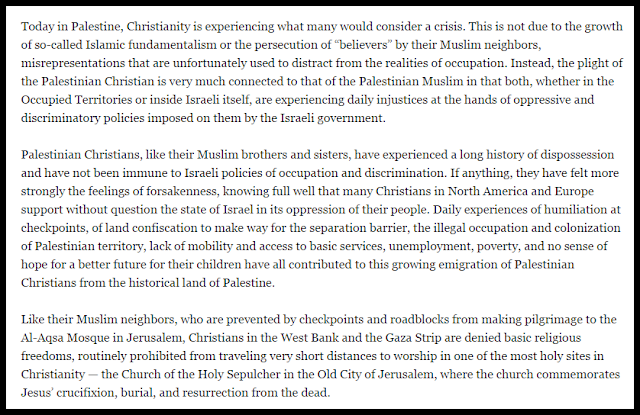 Fourthly, pick and mix your victims.

I've loved  and lived with cats for as long as I can remember.  Whenever they are caught  doing something wrong or stupid (like breaking a plate trying to pinch an extra dinner, or tripping over a shoe, or failing to make a successful jump from the fence) they very quickly recover their dignity by licking themselves and pretending their innocence.     And so for humans too.

Often, in terms of strategy, the best form of defence is not to protest but to attack.  But when one has been responsible for so many wars - the War on Terror, wars for regime change, wars for democracy and human rights (all conducted, implicitly or explicitly, with the blessings of the Religious Establishment) - then it's time to conjure a distraction and a makeover of the Judaeo-Christian image.  Instead of being regarded as the perpetrators .........

.......  why not turn the fox in the henhouse into a martyr.  Why not convert the guilty into victims?

Let us put on the Mantle of Victimhood.

Do enjoy this video clip from two of my favourite comedians - Harry Enfield and Kathy Burke.  You might be able to note the similarity with the strategy of the New Victims - with the grown-up Harrys of the world.

Fifthly, here's a picture gallery of some truths that have to be acknowledged. 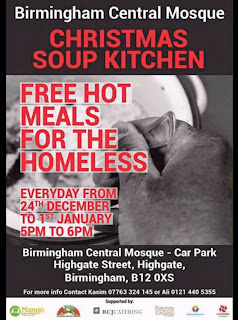 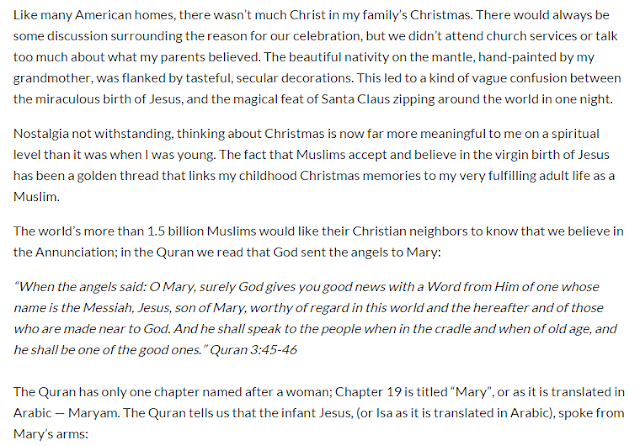 
9.  And, as for Donald Trump, the future(?) President of the USA, he is only articulating what has always been a covert attitude and practice towards Muslims and Islam in this WASP superpower. The reaction of the West is similar to that of the toddler Harry sans the pee in the pants.


Finally, as a septuagenarian Muslim with one foot in the grave, so to speak, I take heart from the Islam that is mentioned in Islamic Relief's global strategy, whose "values and teachings are provided by the revelations contained within the Quran and Prophetic example.  They are ikhlas (sincerity),  Ihsan (excellence),  Rahma (compassion), Adl (social justice), and Amana (custodianship)".

Here's  Vivaldi's piece to  remind me of the Winter of my Disaffection.


Or more realistically, the Yanks and ISIS and whatever else are basically godless politicians.

To believe otherwise is like believe that Najib and Zahid mean something Islamic when they speak of Islam and the unity of the ummah (translation: "please vote for us, O increasingly pissed-off Malay masses..."

Nothing to do with religion at all.