1.  1972/1973.  While going through my 'junk' in Leicester a few weeks ago, I found this poem in Sekolah Menengah Yusof Ishak's School Magazine. 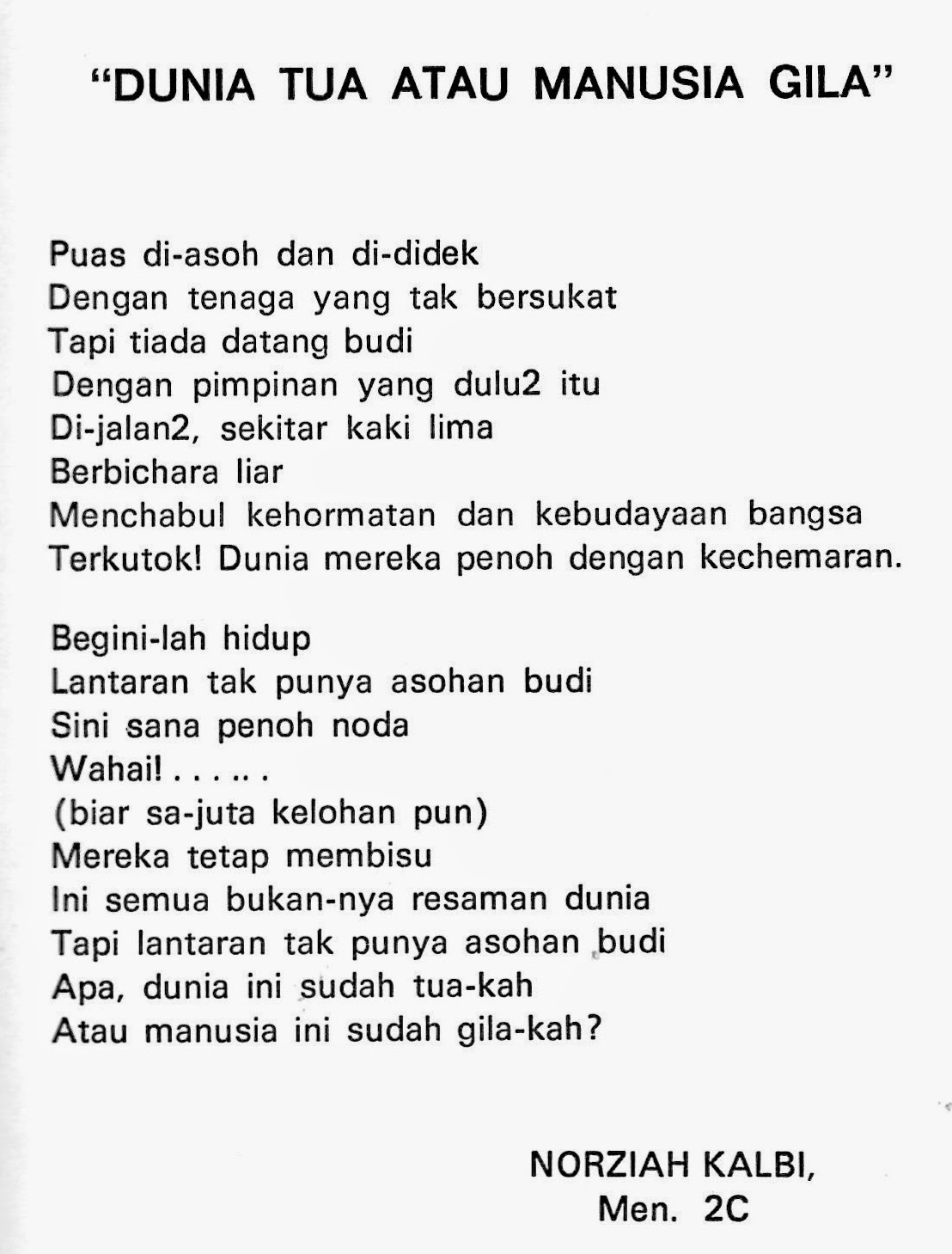 
Dr Mahathir's despondency over the Malays as  'knowing no shame' -  ( Read :  https://my.news.yahoo.com/dr-m-look-east-policy-faltered-malays-still-095400553.html ) has more to do with the near collapse of the old Malay values of  Budi.  As 14/15 year old Norziah had concluded - the Malays  " tak punya asohan budi".

Asohan Ugama has jumped by leaps and bounds since Norziah's teenage years.  Pilgrimages for Haj and Umrah proliferate.  Levels (though not necessarily standards) of education are claimed to be (nearly) world-class.  Universities and number of academics and  PhDs have mushroomed. But in the mad rush for more and more manna on earth and a place in heaven after earth, the Malays - unlike the Japanese - have not been true to their forefathers' and foremothers' wisdom and prescience.

My unschooled ( both religious and secular) mother brought us up on sayings from pantun pantun Melayu.

While we live to offer budi, we have to accept that:

But this stricture was drummed into us from childhood to adulthood. Buat baik berpada-pada.  Buat jahat jangan sekali.

Anyway, the absence of shame is not the monopoly of  Malays.  All other racial groups in Malaysia (or anyone one else in the world for that matter) are guilty of that - it all depends on how the nature of the 'shame' is displayed or disguised.

Furthermore these miscreants are located not only among the dregs of Malaysian society (like the Mat Rempit and petty thieves); they also thrive among the upper and middle echelons of the Civil Service, the educated professionals, the business tycoons and taukehs, the directors of multi-national companies, the politicians and political leaders and even among the religious bureaucracy.

And just look at the shenanigans going on in the land of the Mother of Parliament, in Britain.


2.  1961.  In 1961, at Crescent Girls' School, a group of Malay-medium students had to 'park' at our school because there weren't any Malay Secondary School in Singapore then. 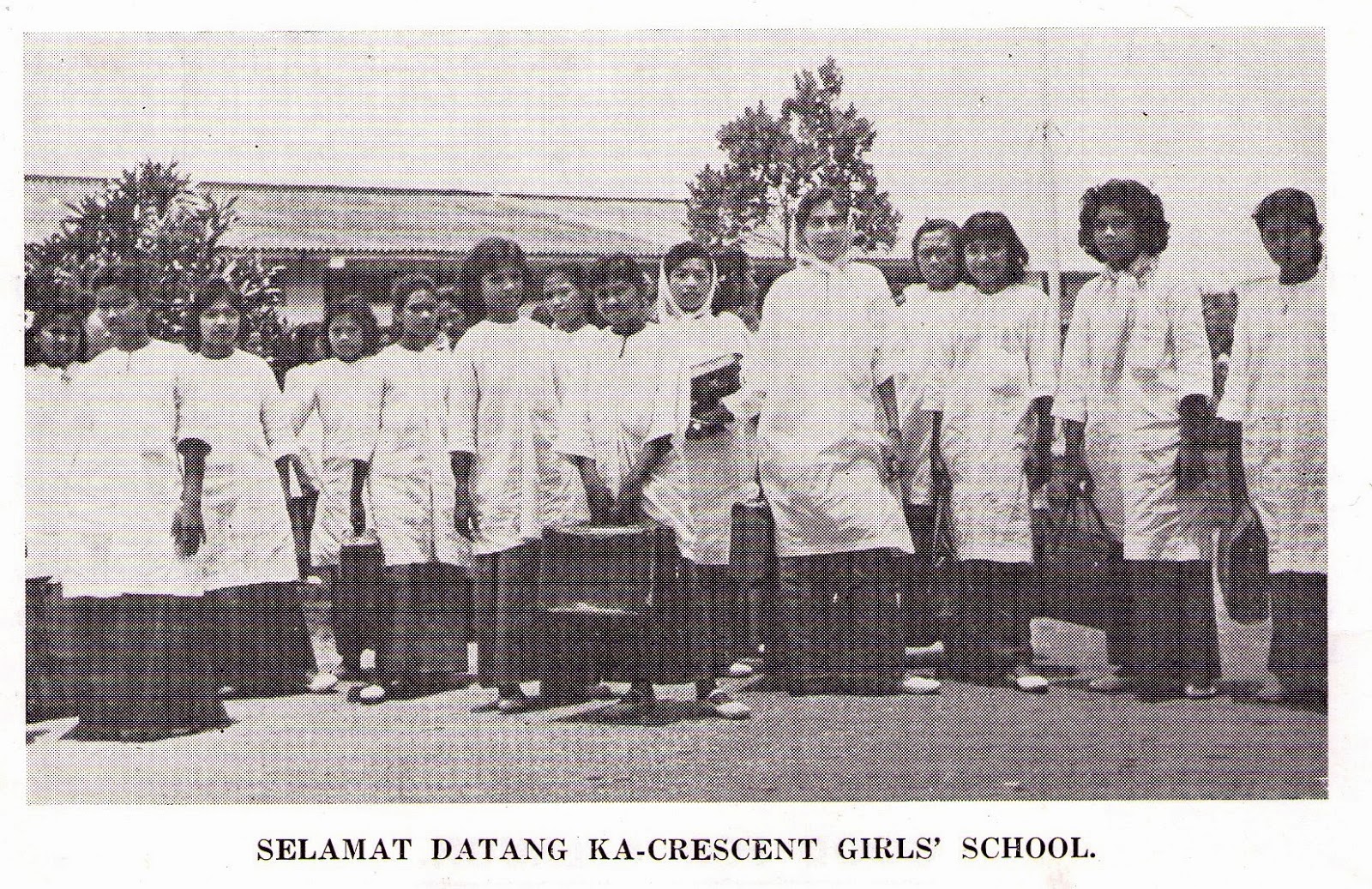 And this was one of their contributions ...... 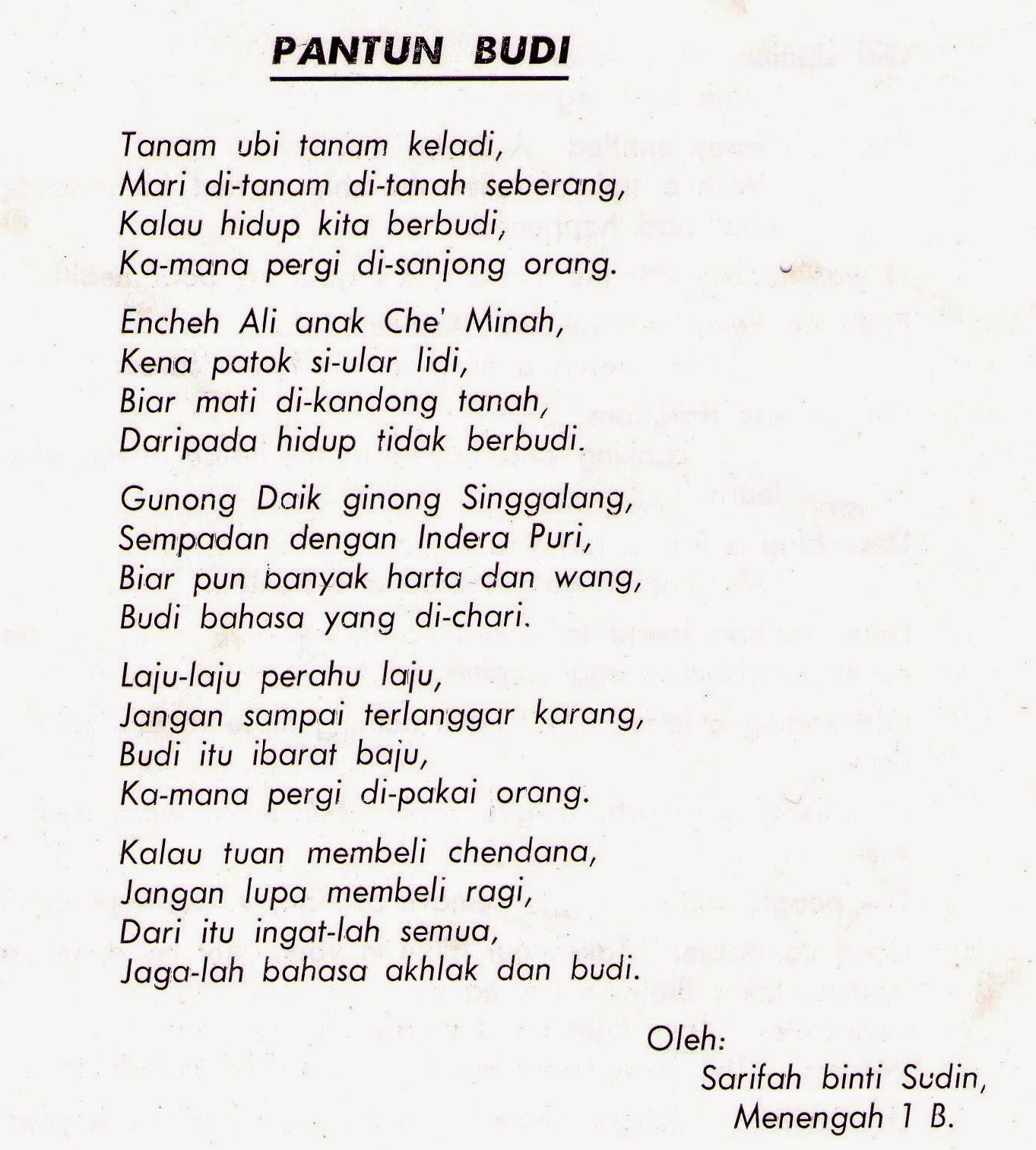 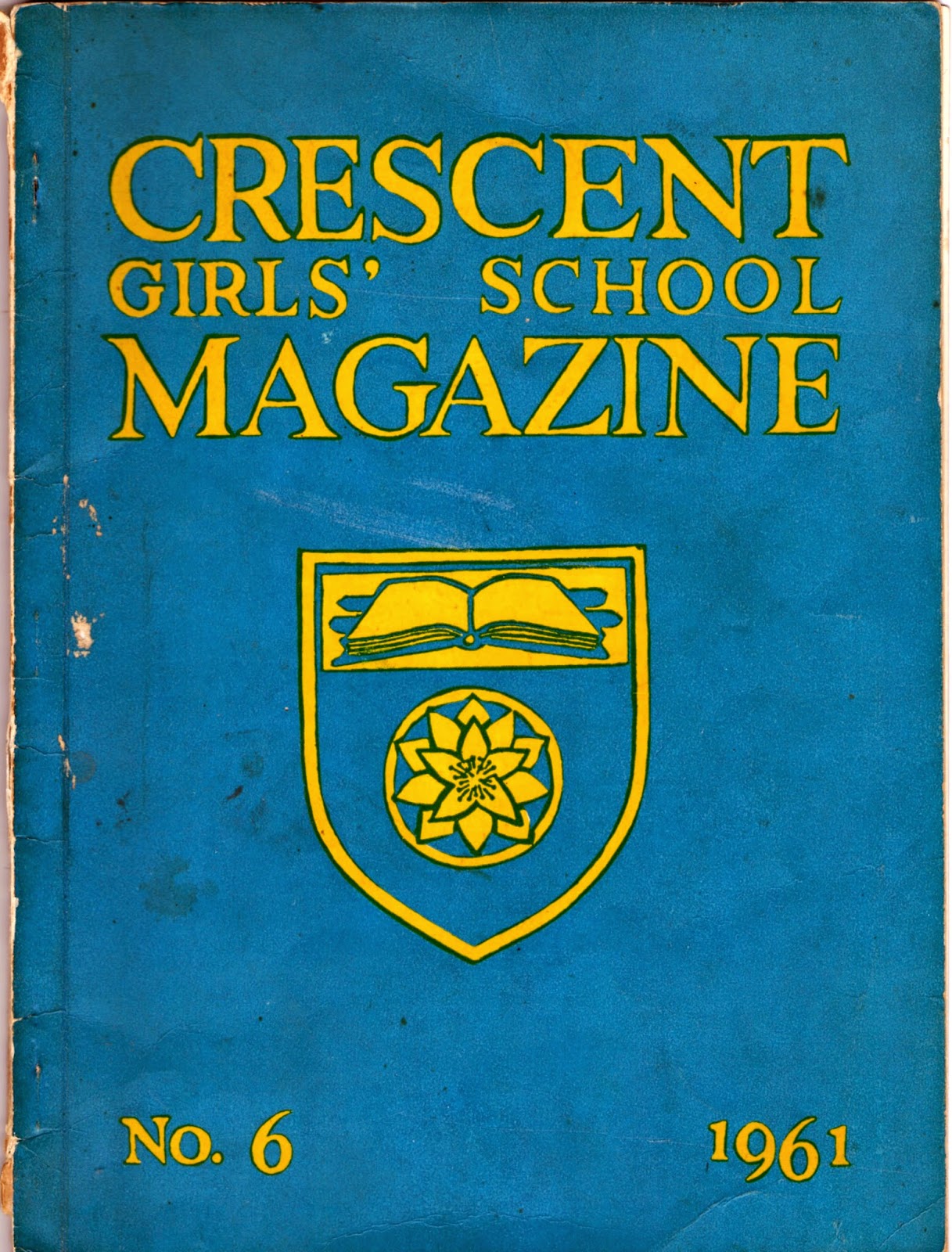 Here are some other aspects of  Malay  'ways and purpose' as related to budi.  There have been studies and dissertations written on Budi in Malay culture. For instance ....


The following aspects of 'Budi' are from my collection of dictionaries that hark back to the 1960s. 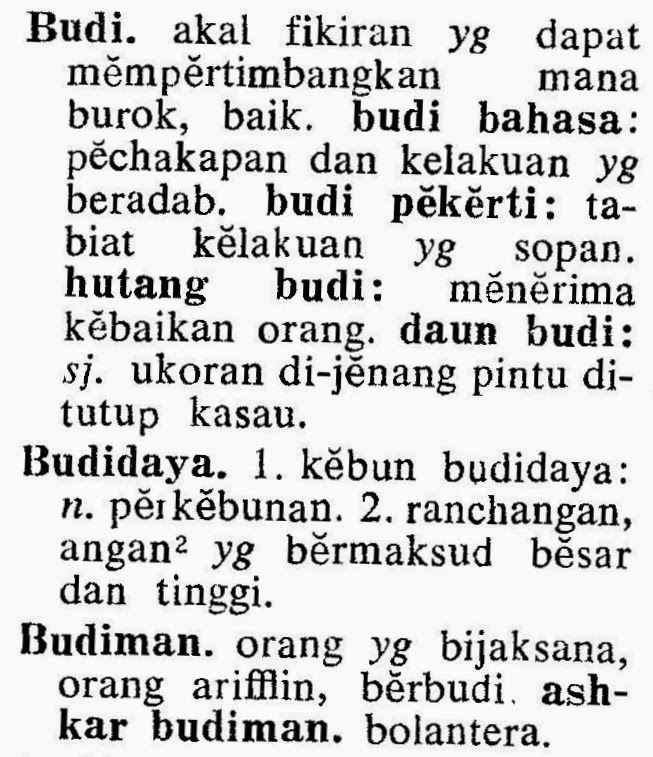 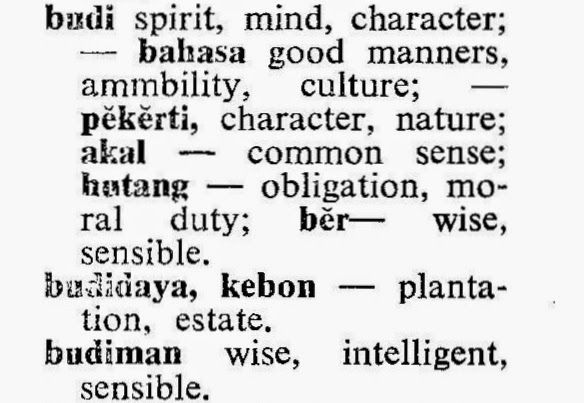 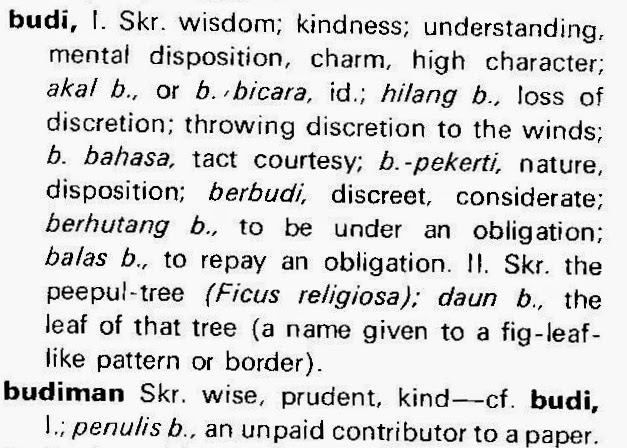 What is missing among present-day Malays is " bangsa Melayu yang budiman".

When in September 1982 my youngest brother Akim, passed away,  this  'manusia baik budi'  from Leicester was doing his fieldwork in a remote Adivasi village near Kashele, India.  He walked one mile to get the bus for an hour-long trip to the small town of Karjat.  This was followed by a two-hour train journey from Karjat to Bombay and from here he flew to Singapore to comfort my mother.  (Even today, he is petrified of  plane travel.)  After a day or so, he took another plane journey to Bandar Seri Begawan where I was working.

His was a comforting shoulder to cry on.


I taped this song "Serunai Malam" by the Sumatran singer Hasnah Tahar  (orkest Saiful Bahri) in 1983 from this album. 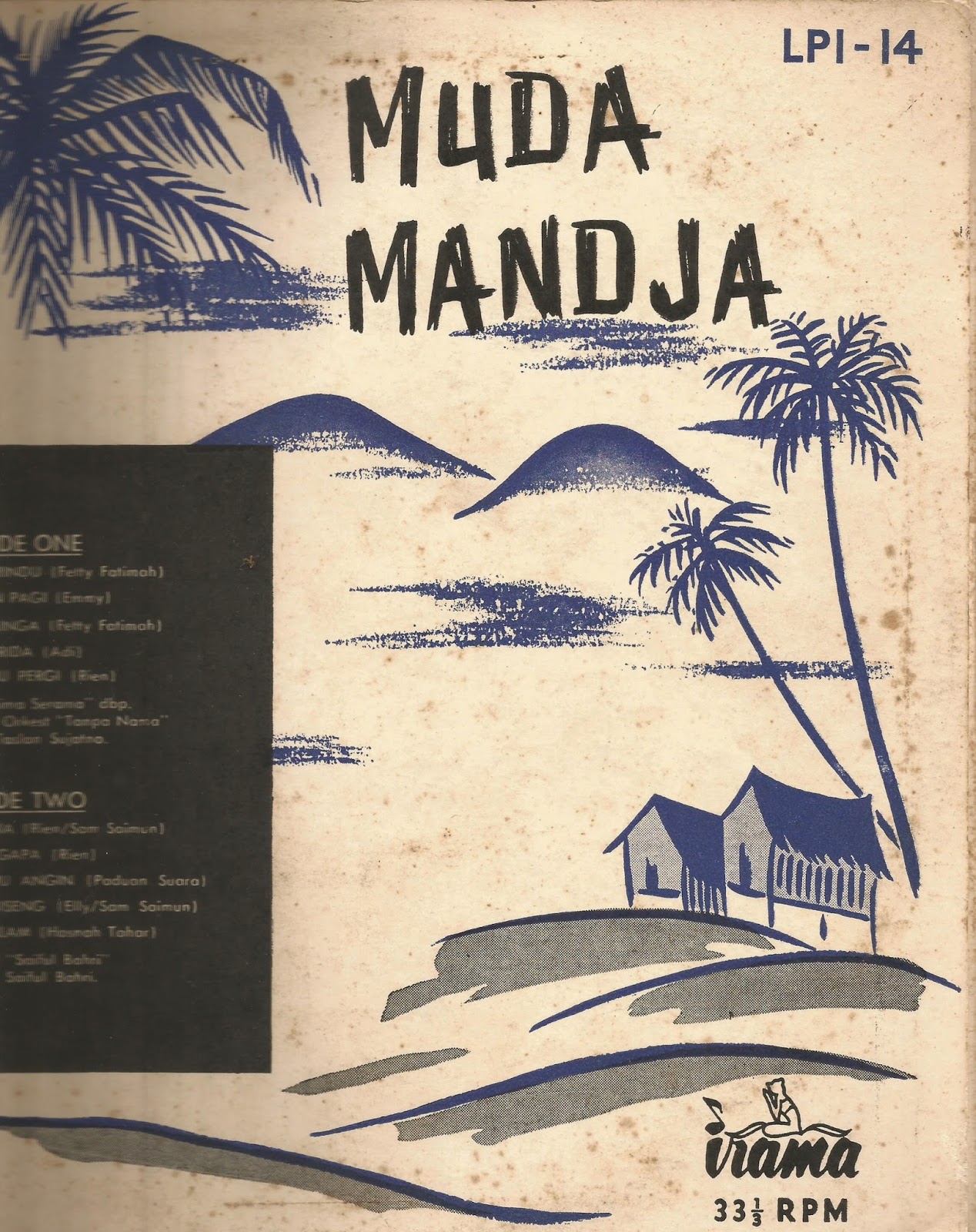 I treasured the cassette tape and in winter 2013 I sat down to load all of these songs from tape to cassette player and onto my own clumsy video.  In this way, I can keep on listening to them without causing wear and tear on the tapes and the Irama vinyl album.

These lines from "Serunai Malam'  sum up the relevance and significance of Budi for this Malay.

How enlightening...and nostalgic...especially the song...it has that indescribable nostalgia, especially when played with the background view of a typical British weather...those were the years...

Am delighted you enjoy the posting and 'Serunai Malam' in a British winter scene.

Hope you noticed the postman making his delivery?

Yes, I did notice the postman making his delivery...reminded me of my days at the Mgt Centre, Bradford U in 1993-97 with my family...btw, I bought the kg. story book for my kids few years back and they love it...take care & salam.

I like reading your postings and especially enjoy pictures of you and Uncle Ian. Such a lovely couple! I wish you both long healthy lives together. God bless

Salam and thank you Dhahran Sea,

You ARE a good observer. You know, Bradford is not that far from Leicester. One day you might want to see Bradford again - do drop by Leicester when you do.

Iain's happy that your children enjoyed Fatimah's Kampung - as you said earlier, those were the days.

Thank you for the very sweet comment and the kind wishes

As for those pictures of the Dopey Duo - leave them aside. Look at the flowers and leaves instead - ha ha!

Been away from reading blogs these past few days; thanks for the reply...I had one opportunity to revisit Bradford in 2001 while on a business trip...I also have a couple of friends who decided to make UK their home...Zulkifli Ahmad & Elias Hamdan...tried to convince my wife & children to revisit Bradford/UK earlier this year, but, alas, they are now newly "converts" of K-Pops and anything Korean, and ended up visiting Korea instead...will keep you & Iain in mind when I have the opportunity to visit UK again inshaaAllah...what's Iain's and your latest work/project nowadays?

Btw, been following your "Melayu Budiman" thread as well...almost an extinct species, I must say.