....And back to Zaidgeist's prescription for a better Malaysia!

One  of Zaidgeist's suggestions as to why Malaysia should tread in the footsteps of the Sifus and Mandarins south of  Selat Tebrau was:

Malaysia's corruption index would be low..

It cannot be denied that the level of  corruption in Malaysia is disgraceful, ranking 53rd out of 177 countries in the Corruption Perception Index (CPI) , 2013.

I recall taking a driving holiday in the Semenanjung in the early 1970s.   I was stopped by a policeman in Malacca,  who first asked me for my driving licence, then my passport/identity card, then my Car Insurance - all of which I happily provided.  He paused and then asked me where I was heading  and I mentioned Si Rusa Inn at Port Dickson.  He paused again looking a little uncomfortable.  Then I asked him "Ada masaalah lain, Inche?"  He gave us a wan smile and waved us on to continue our journey.  Apparently, he knew that we knew what he was waiting for.  I was told later by someone who knew the ropes that the policeman expected  some ringgit when I handed over my documents.  But I didn't know how the system worked and he could not or did not know how to bring himself to say,  "Saya mahu duit kopi!"  I guess my ignorance or my innocence saved me - and him too?

All countries, even the great and good, get sucked into the pit of corruption - ranging from the petty bakshish to large scale financial and political scandals.  Take a look at these 10 ways of lining one's nest as an MP. 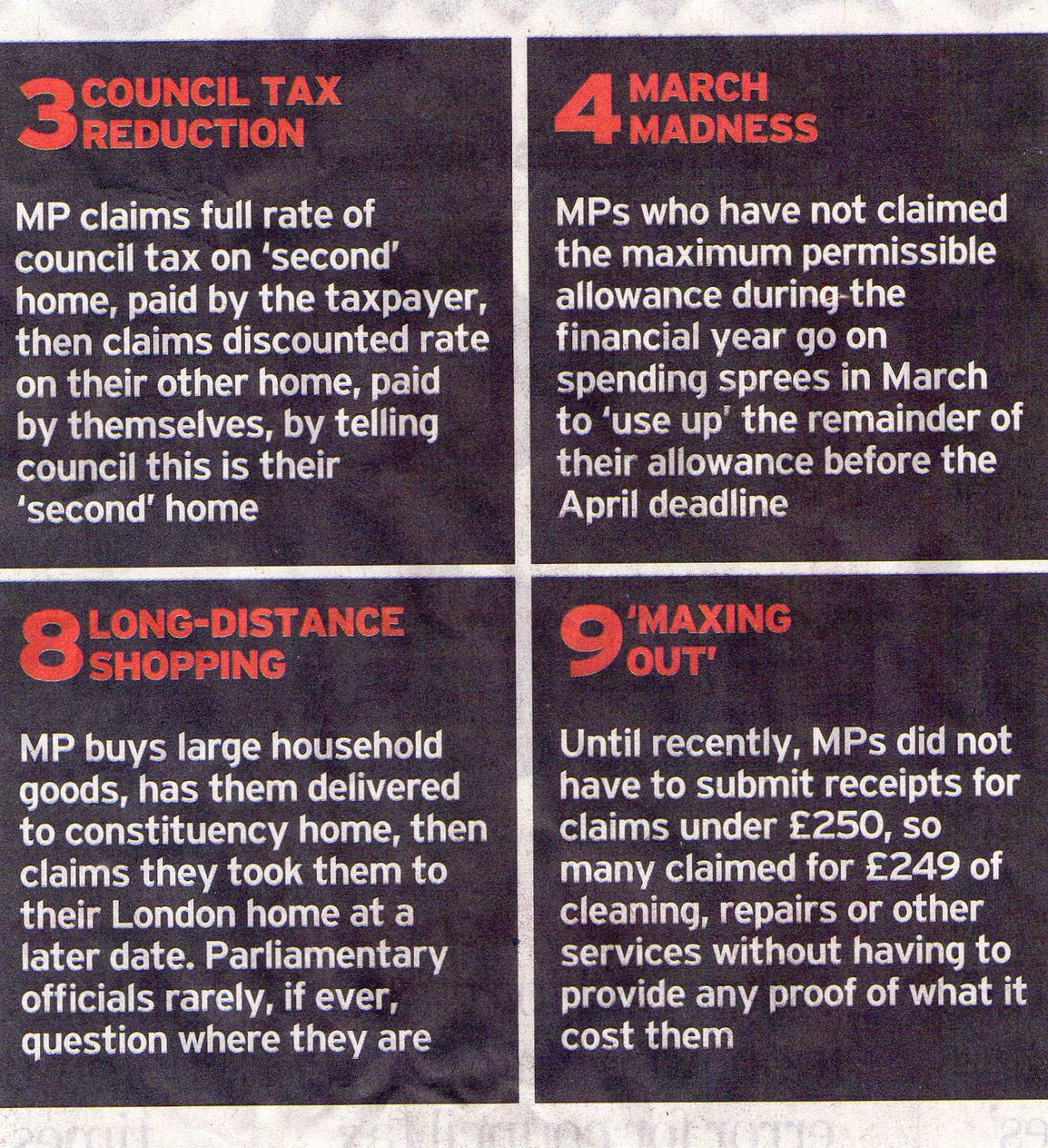 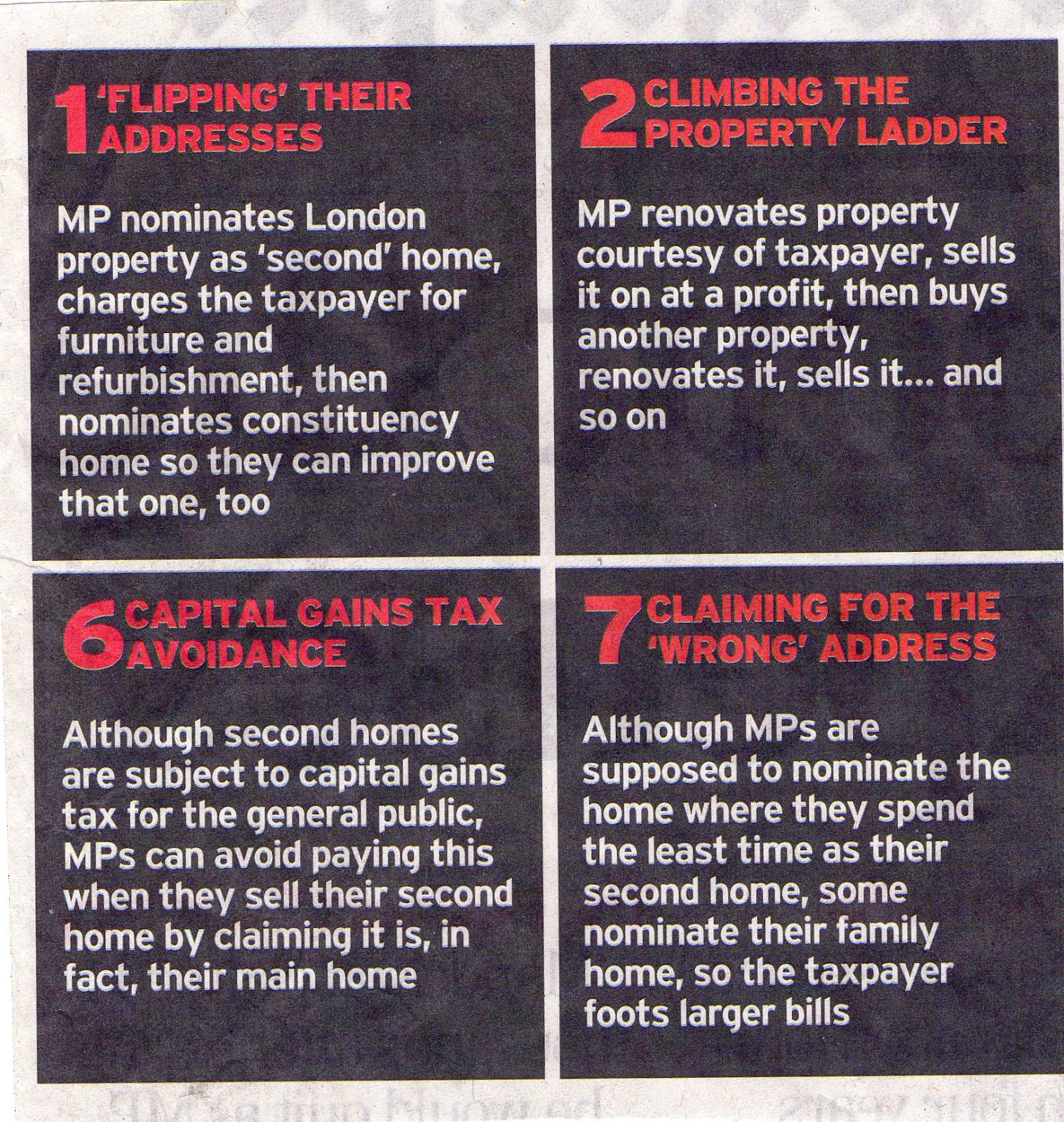 Where did the above large scale, long term corruption of MPs occur?  Is it in some Asian or Southeast Asian or African state?  Surprise, surprise!  It happened in the Mother of Parliaments - the British Parliament - and was exposed by the Daily Telegraph in May 2009.    And after all the hand-wringing, and excuses, and  'punishments' , it didn't stop: Tory Peer Lord Hanningfield, at the end of 2013 claimed an attendance allowance of GBP 300 for clocking in for just 21 minutes in the House of Lords.    And where is the UK on the Corruption Index?

That however is peanuts compared to the fat bonuses and pay-offs that the big banks dish out to their failed directors and CEOs in UK.

But back to Singapore.    Here's an extract from The Real Singapore (August 2012):

The recent spate of high-profile corruption cases involving senior civil servants and leaders of the establishment has set some Singaporeans questioning if Singapore is that 'clean'after all.
However, Law and Foreign Affairs Minister K. Shanmugam uses 'human nature' to deflect public concerns, saying that "corruption and falling to temptation are basic vices that have existed since time immemorial".

And here are some quotes from the Minister, taken from the above article.

1. "Like in all societies, and in Singapore as well, there have always been people who have been corrupt.  There will always be people who will be corrupt.
2. "There will be people who, whatever rules you put in, they will look to find a way around the rules and they will fall for temptation."
3. "There is no society in the world, in the past or the present, where every person is totally clean."

But I do know of someone who is 'totally clean'.  My brother knew a young Malay engineer who studied with him in England and came home to begin a job in a Government Department.  Every morning, this young man would find a bundle of money in an envelope on his table.   He knew this 'temptation' came from a contractor, who happened to be Chinese, and who wanted to get first choice in a planned project.  The young engineer sent the money back to him every time - to indicate this was not how he worked.  Some time later, he discovered a large deposit of money in his bank account.  He was terrified at the extent to which he could be framed for corruption.  He got the bank to return the money and resigned from his job to escape harassment from such bona fide businessmen.

Most of the time we punish the receiver of the bribe.  But the tempter, the seducer usually gets away.

The Real Singapore added:  Speaking at a National Day celebration dinner in Chong Pang on Saturday, Mr Shanmugam said that Singapore cannot completely eradicate fraud and bad conduct, even though it has created a system that is very clean and efficient by international standards.


So who are these cankers in the Singapore rose?

2.  Ex-chief of the Central Narcotics Bureau Ng Boon Gay " was charged with four counts of corruption for obtaining sexual gratification"  in June 2012.  However he was acquitted because he and the key witness "were in a consensual and intimate relationship".

3.  Former National University of Singapore Law Professor Tey Tsun Hung was found guilty on six counts of corruption, of receiving from his student, sexual gratification and gifts for grades..    He was sentenced to 5 months'imprisonment. (July 2012)

4. Former Singapore Civil Defence Force Chief Peter Lim was convicted for corruption in June 2012.  He was a former  State Scholar.

5.  A Corrupt Practices Investigation Bureau ( CPIB) Assistant Director Edwin Yeo Seow Hiong was charged with CBT, forgery and misappropriating $1.7 million between 2008 and 2012.  Part of the loot was used to feed his gambling habit at the Marina Bay Sands Casino.

6. Lim Cheng Hoe, a diplomat - a former chief of protocol at the Ministry of Foreign Affairs - overcharged the authorities S$89,000 for gifts bought for official purposes.  He was  jailed for 15 months In February 2014.

7.  Some time in July 2013, Deputy Superintendent Lim Kwo Yin was fined S$10,000 for negligence that caused the death of an inmate at Changi Prison.

8.  From the lower echelon of the Civil Service, the Malaysian Insider reported on a Senior Staff Sergeant Iskandar Rahmat  who was charged with the murder of two men.  It seemed that he had financial problems even though he was not a gambler.

I take off my hat to the Minister for acknowledging that humans (and nations) cannot be perfect and that like other mortals, Singaporeans are 'humans' after all.  Yes, people are capable of breaking the law,  be it moral or criminal.  But it is so depressing to watch the fall of  the  great and good and squeaky clean.  Who can we look up to as countries to emulate -  as the paragons of  "low corruption levels" ?

Finally,  here's a bigger picture of what corruption really involves.  It's not just a matter of bribery and fraud. 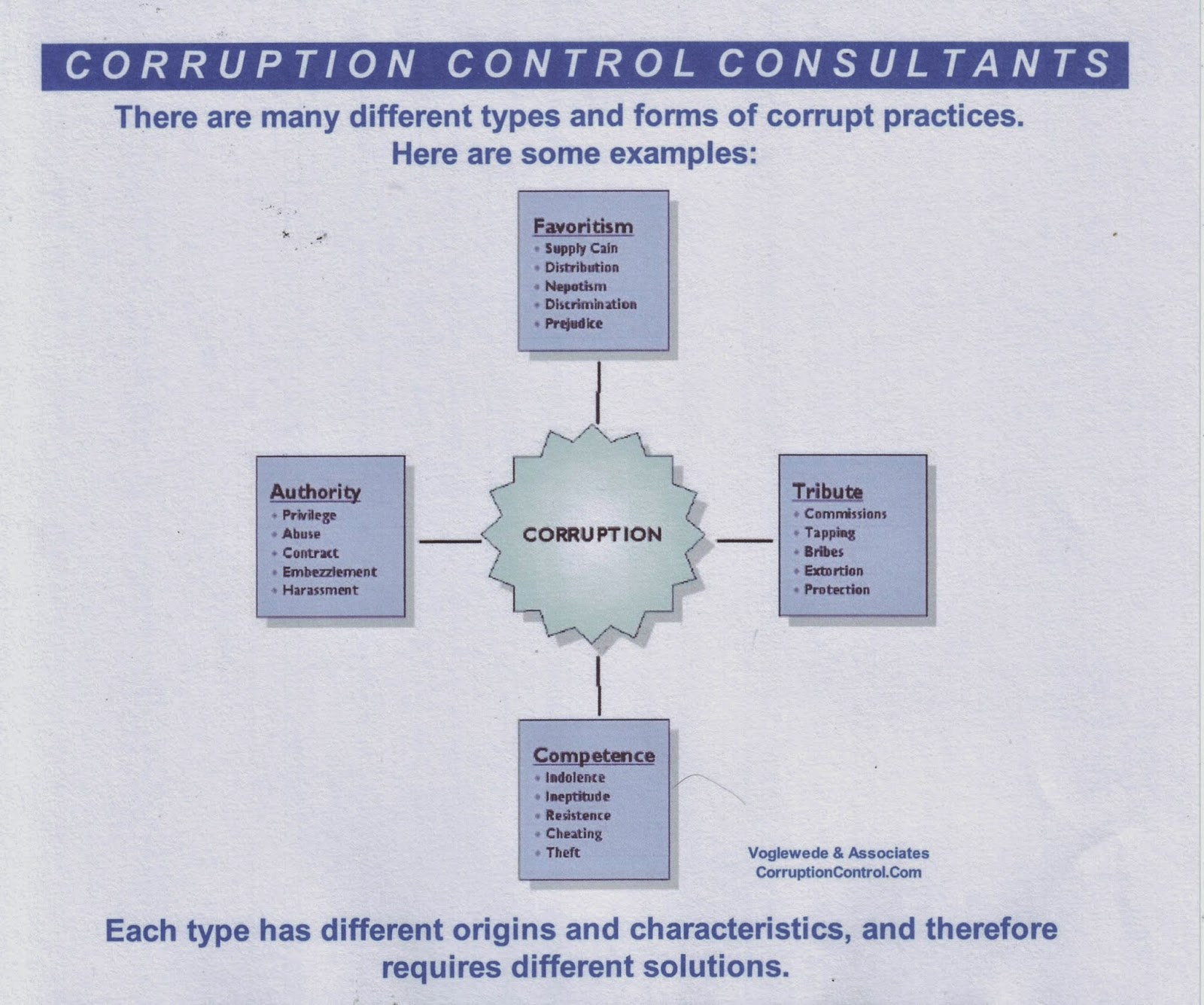 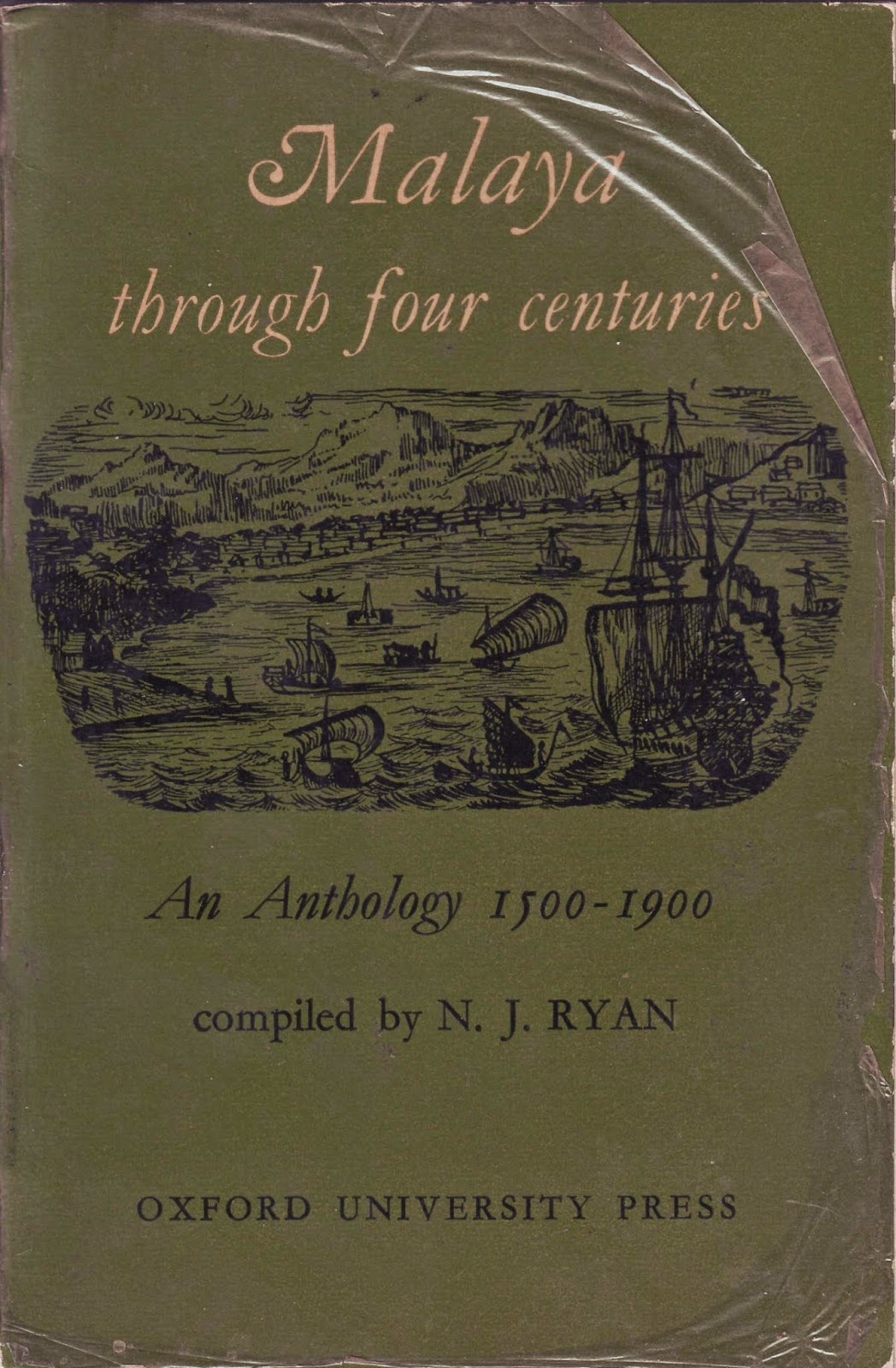 .... I found this interesting little snippet on page 83. After the signing of the treaty  "which made over Singapore to the East India Company" on February 1819, there was a little celebration.   "After the ceremony and sealing was over, presents were given, consisting of opium, arms and woolens of scarlet colour."   Guess who gave away the opium and arms to sweeten the contract.

Today there would be grand gifts of an all-paid-for holiday to Europe or USA, or a Mercedes Sports car or if the stakes are high enough. a condominium.  The reckless and foolish Malay would part with his heritage and tanah air for a handful of silver.  That is why when the British schemed to set up the Malay 'Protectorates' in the 19th Century, it was not without the support of the elites, the collaborators, the opportunists, the connivers and the carpet baggers among the Malays too.  And we still practise  that  tabiat today, but on a grander scale.

Well, at least, these people get identified and prosecuted in Singapore.

Why else would Interpol decide to site it's regional office in Singapore when it had other choices in the region?

A rose is a rose by any other name.

Corruption is corruption where ever it takes place.

There must be many other reasons why Interpol decided to locate in Singapore.

You will find that the reasons some of those prosecuted were politically motivated.

Scribner has an excellent point.

How vigorous are our nation's efforts to clamp down on corruption?

I've lost count of the number of times I've had and heard police officers & officials trying to solicit 'duit kopi' and kickbacks. The big fish always gets away with it while once in a while, a token low level official will be hauled up for window dressing.

As a famous Malaysian politician said "Close One Eye..."

Here it is Ma'am, the other side of so-called sifu Singapore: