Vestiges - of Hari Raya and Kampung

One more day to Hari Raya - thousands have gone back home to the kampung.  This has always been part and parcel of celebrating Hari  Raya and I hope that in years to come the home of the Malays in the kampungs will always be there and will not have been sold, mortgaged, auctioned and requisitioned by greed, penury, development  and the authorities.

Old Singaporeans like me remember what Malays in the Semenanjung are enjoying today.

In that house Mak would cook ketupat in big cauldrons.  Every year without fail she would make dodol - till today I have not found any dodol that could match hers, for taste and texture and longevity!  We would help in the easy jobs like squeezing  coconut milk from 10 coconuts or so and stirring the brew during the early stages.  The latter part, when the dodol became thick and heavy were left to Mak and Abah.  We would of course be dipping into the kwali when it was all done to get to the kerak which was the most delicious part of this all-mighty Malay treacle-cake!

But we, or rather I, had  more poignant memories of Hari Raya in the kampung simply because Abah had taken photographs of the celebration. This was when when we were living in a rented kampung house just across the river from the house Abah was building - and which we would soon move into.  Because my sister and I were just slightly older than toddlers, Abah would make a special star and banners for his two little girls and later, his little boy Mus.


But those halcyon Singapore days are gone because the Malay kampungs have been expunged.  Only memories and photographs in coffee-table books remained - it's almost similar to the way we preserve and observe the life of the dinosaurs.

As for this kampung at Pulau Semakau where most of  my 1967  Menengah Satu kids at Sekolah Menengah Yusof Ishak came from :


But,  my nostalgia for those days have been encapsulated by the spouse in this illustration.  It combines the Blogger and the person and he has lovingly included my two favourite flowers - Bunga Tahi Ayam (Lantana) and the Senduduk  and cats as well!   What more could a geriatric kampung girl ask for? 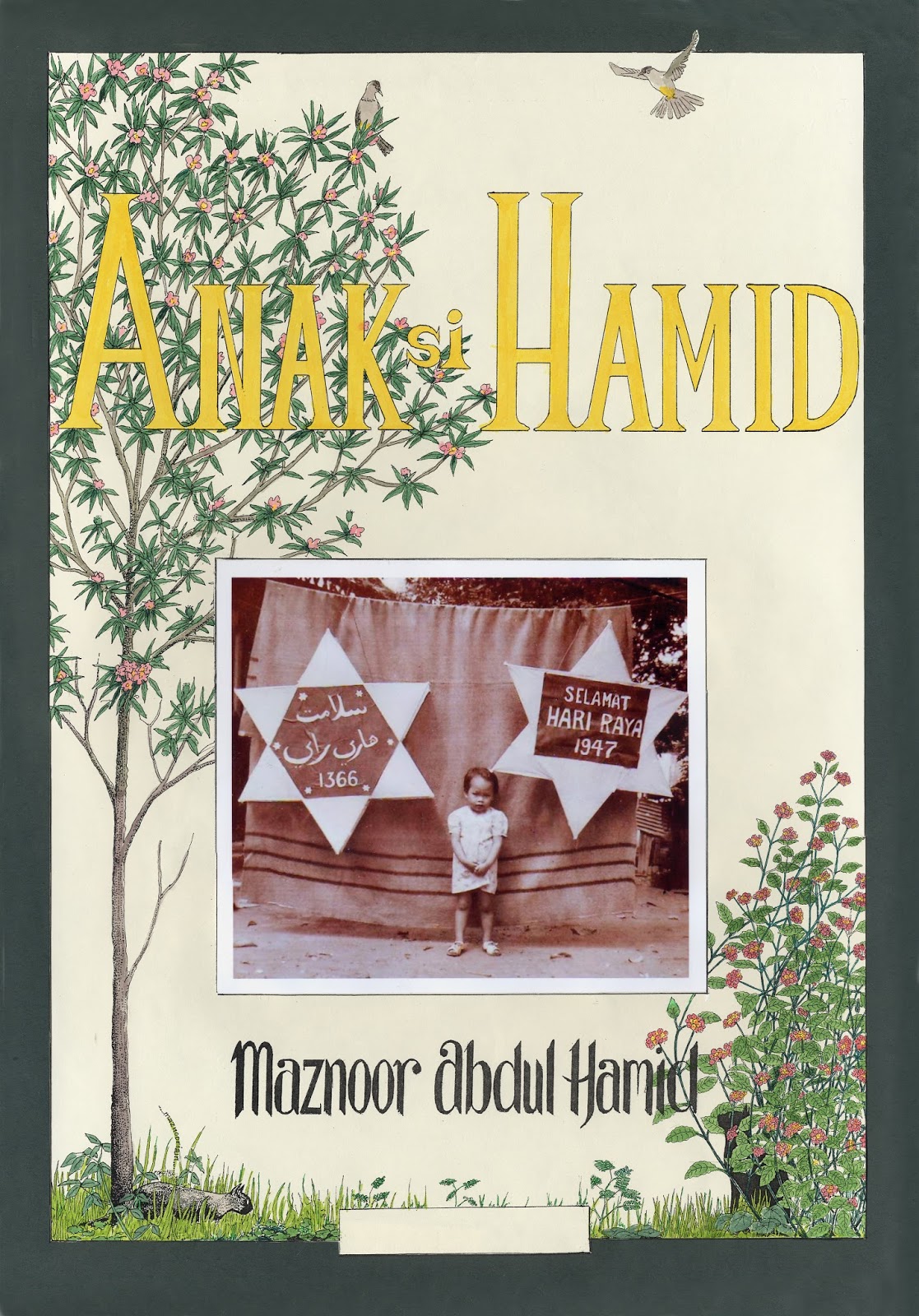 And finally to all my followers and readers and friends and family, here's an old fashioned Hari Raya card.  No Eid Mubarak and other modern/alien terminologies - just a simple SELAMAT  HARI RAYA AIDIL FITRI,  MAAF ZAHIR dan BATHIN. 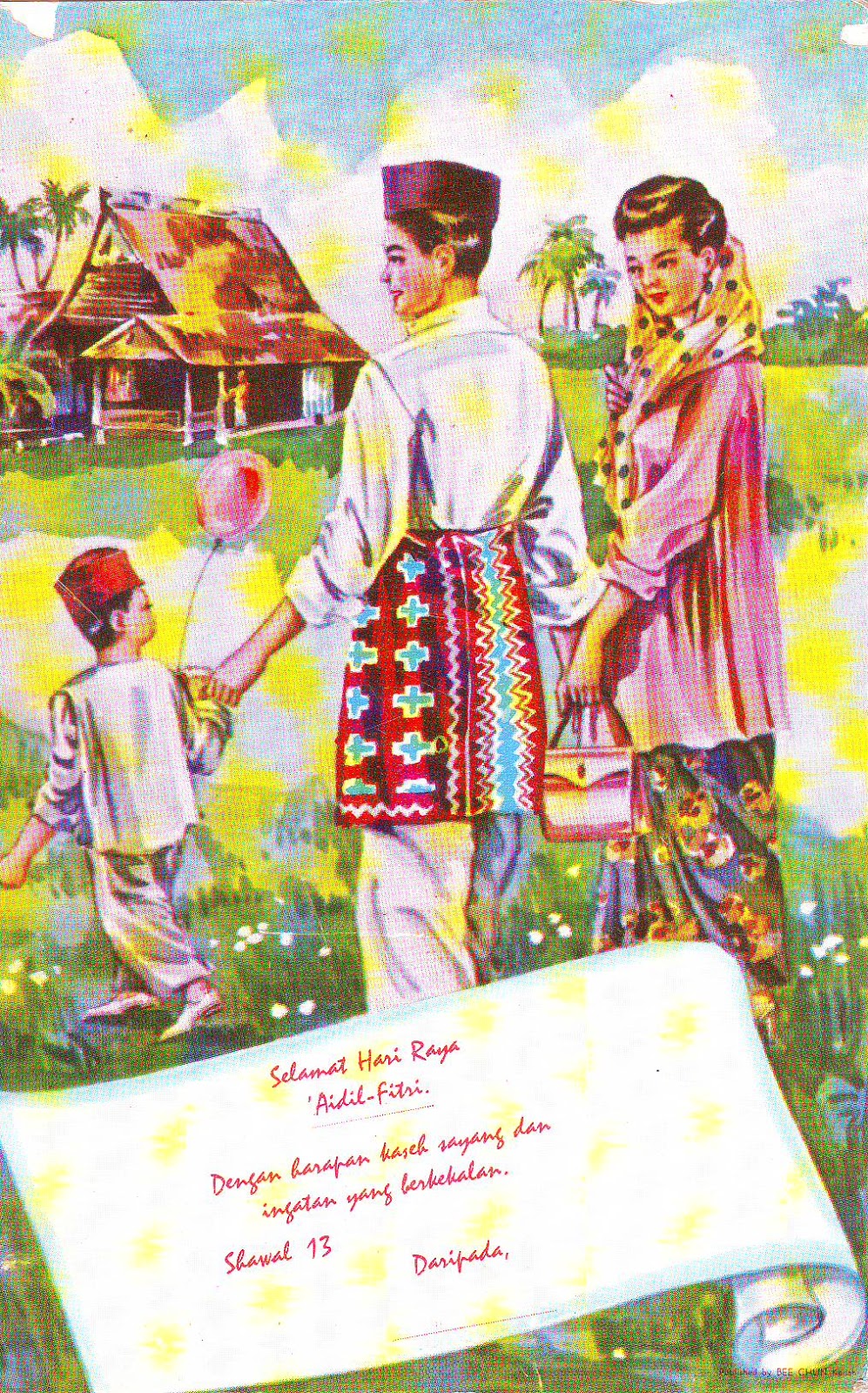 Selamat hari raya aidil fitri to you and family...

salam to you auntie and Uncle Iain!

I'm at Kota Tinggi, Johor at this moment, just finished the lemang and ketupat dinner while watching kids playing fireworks.

Selamat Hari Raya to you, Uncle Iain and your family! :)
Maaf zahir batin

I wish you the same felicitations on this glorious day.

Savour your Hari Raya days today and in the future.. They will be the fount of your happy memories when you get to my age.

And Selamat Hari Raya too - to you and yours at Kota Tinggi.

Selamat Hari Raya to you and Iain. I hope you had a good one.
I celebrated first day in Ampang Jaya and the second till yesterday in Kuantan. Mine wasn't stupendous, but the normal, a good one, the way I like it.

Yes we, like you, had a good, 'normal' Hari Raya too. But your journey to Kuantan seems more exciting than our trips around KL.

But I have to mention here what a lovely surprise it was to bump into you at Pegaga!

Awesome Blog Mak Ngah.... I would visit this blog once a while and amazed with your thots and writings. Selamat Hari Raya and Maaf Zahir Batin. InsyaAllah jumpa lagi... Anis, (Maria's BFF).

I'm so, so sorry I failed to reply to your comment. Blame it on decrepit old eyes.

Thank you and I hope you had a wonderful Hari Raya in Coventry - as for 'sunny', we have enough of that here.

Sorry me duck for my oversight.

Great to see you here. Hope you had a great Hari Raya.

Pop in when you can - any friend of Maria can rent me as a ma'ngah.

Ash and Uncle Iain thank you for your kind wishes. Selamat Hari Raya too- to you and yours.

I am old and old people always feel despair looking at the present.

But people like you are our source of hope for the "tanah air".